The situation may not be nearly as grim as it looks. For Klaus Lackner, at least, human-induced global warming is a problem that can be controlled, perhaps even solved -- even if humankind doesn't manage to dramatically reduce greenhouse gas emissions.

Born in Heidleberg, Lackner, 57, is a geophysicist and director of the Lenfest Center for Sustainable Energy at the renowned Earth Institute at Columbia University in New York. He's also the man behind an ambitious new solution for the climate change problem. The scientist wants to build millions of CO2 catchers, machines the size of shipping containers fitted with chemical filters to pull greenhouse gases out of the air the same way trees do. The devices may be bulkier and less attractive than real trees, but they are thousands of times more efficient. 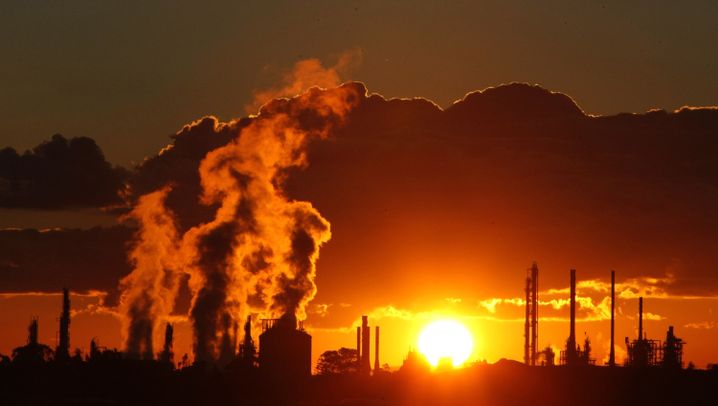 These carbon catchers could offset many hundreds of times as much CO2 as wind turbines using the same area, the researcher says, and they could be set up anywhere on Earth. They would even be capable of filtering out car or power station emissions pumped up into the atmosphere years ago. No other technology can do the same.

Because of the sheer amount of it in the atmosphere, carbon dioxide contributes more to global warming than any other greenhouse gas, even though ts concentration is a mere 0.04 percent. Could it be possible to build a machine to capture these relatively few, but harmful, gas molecules? How much energy would such a machine require? And even if it worked, wouldn't it be far too expensive?

Lackner isn't put out by skeptics' questions. Tall, slim and elegantly dressed, the professor sits in his office on the 10th floor of a university building on 120th Street, behind him a blackboard covered with mathematical formulas. He leans back and begins to hold forth. He has calculated every aspect, from energy demand to efficiency and costs. The results were so positive that Lackner himself could hardly believe them. He rechecked them so often that he now knows the numbers by heart.

"What interested me in the beginning was the question of how to capture CO2 from the smokestacks of coal-fired power plants," Lackner says. "But then I realized it doesn't require all that much more energy to remove CO2 from the air." Energy expenditure, he explains, rises as the concentration of CO2 falls, but in logarithmic, not linear, fashion. In other words, it remains incredibly low.

According to Lackner, the trick is to find a material that binds CO2, but can also release it again without requiring an excessive amount of energy input. His team settled on a special synthetic resin with a property that seems almost magical -- "It attracts CO2 strongly when dry, but releases it again easily when wet," he says.

A CO2 catcher might include large synthetic resin surfaces protected from rain, turning in the wind like a merry-go-round until filled with carbon dioxide, then drawn into a vacuum container and sprayed with water. The CO2 released would then be pumped out and compressed.

All that won't work without energy input, Lackner admits, "but the process produces only about a fifth as much CO2 as the device collects." After it has been extracted, the collected carbon dioxide could be stored deep below the earth's surface.

Lackner estimates the costs of this method at about $300 (€205) per ton of carbon dioxide in the beginning. In the long term, he believes the price could sink to around $30 per ton.

It would require 10 million CO2 catchers to offset between 10 and 15 percent of annual emissions, Lackner estimates. Then he conjures up another number: "Gas prices in Europe would rise by just six cents if oil companies were required to offset their emissions in this manner." Currently, however, only an unfinished prototype exists. There's also growing competition -- researchers in the United States, Canada, and Switzerland are all working on similar devices.

The Intergovernmental Panel on Climate Change (IPCC) has so far largely ignored this new technology and many colleagues in the field are skeptical. "I doubt it's possible to do this with a reasonable amount of energy expenditure," says Jochen Oexmann, who studies carbon capture at the Hamburg-Harburg Technical University. "Even at a power plant it requires a great deal of energy."

More recently, however, support from within the scientific community has increased. "We need such technology in order to buy time," says Nobel Prize winner Paul Crutzen from the Max Planck Institute for Chemistry in Mainz. Three years ago, Crutzen perturbed colleagues with an unusual proposal to cool the climate: Shooting sulfur into the stratosphere. "I wrote that out of desperation," he says today. "Filtering CO2 out of the atmosphere would, of course, be much better."

"It's a very interesting method," agrees Elmar Kriegler at the Potsdam Institute for Climate Impact Research. "We will take it into account in some of our future climate forecasts."

Lackner's Columbia University colleague Wallace Broecker, 78, however, takes his praise the furthest. Broecker has been warning about the consequences of climate change since the 1970's and declares, "Klaus Lackner is the cleverest mind I've come across in 57 years of research."