There's a widely held assumption that climate change will have horrific consequences, not only for the environment but also for its inhabitants. As resources become scarcer, the logic goes, the number of violent conflicts across the globe will increase. At first glance, the claim would seem to make sense. And yet for the last 20 years, scientists have been debating the question as to whether global warming necessarily makes conflict more likely. A flood of studies on the subject has failed to provide much clarity. Some researchers see climate change as a danger to peace, some don't. Still others believe that global warming could even reduce the risk of war.

Given the lack of consensus, a recent study that appeared in the respected journal Science was all the more astounding. A team led by Solomon Hsiang from the University of California, Berkeley analyzed 60 studies from a variety of disciplines and came to the conclusion that global warming clearly increases the danger of violent conflict. Should average temperatures increase by 2 to 4 degrees Celsius (4 to 7 degrees Fahrenheit) by 2050 as forecast, the study claimed, armed conflict could increase in some regions by as much as 50 percent.

All regions of the world would be affected, the researchers wrote. Sudden increases of domestic violence in India and Australia, more corporeal violence and murders in the US and Tanzania, ethnic riots in Europe and South Asia, conflicts over land in Brazil, police violence in Holland and even historical events such as the fall of the Mayan Empire: all such examples were used to support their theory. The study, they claimed, was the first such large-scale report on the issue. Never before had so much data been analyzed.

"Hotter Weather Actually Makes Us Want to Kill Each Other," was the headline chosen by the Atlantic. "Rise in violence 'linked to climate change,' wrote the BBC. "Global Warming Is Greatly Increasing Crime and Other Conflict," it read in the Huffington Post. Several German outlets have run variations on the "Climate of Violence" theme with Focus Online leading the way. Their headline? "Agro-Heat Turns People into Killers."

But there is a problem. Other experts were unusually forceful in criticizing the study, accusing Hsiang and his colleagues of using questionable statistical methods, of arriving at dubious conclusions and even of a tendentious selection of data. Hsiang et al. have since reacted with an exhaustive reply taking their critics to task.

One of those critics is Jürgen Scheffran, a professor at the University of Hamburg who specializes in the security risks posed by climate change. In 2012, he and others also completed a study on the topic, with an abridged version likewise appearing in Science. The team analyzed 27 studies and found that "16 of them … showed that global warming increased the likelihood of violence," Scheffran says. But 11 showed that whereas climate change could increase violence in some cases, it could lessen the chances of violence in others -- or have no provable effect whatsoever. "Hsiang and his team didn't consider eight of these 11 studies," Scheffran says. "When one shrinks one's database like that, it results in a certain image."

Biting critique of the study was voiced in Science as well. In a background article that accompanied the report, the Oslo-based economist Halvard Buhaug was quoted as saying that Hsiang and his team ignored certain data. "More worrisome," he wrote, is the fact that they seem to have used data "that return the strongest effects." Buhaug is the co-author of an April study that contradicts Hsiang's conclusions -- and which was not considered by Hsiang in his project.

Jochem Marotzke, director of the Max Planck Institute for Meteorology in Hamburg, echoed the criticism. He said that Hsiang and his team shrugged off alternative explanations for the increase in violence and thus "maximized the apparent explanatory power of changes in the climate." In general, Marotzke said, "he is skeptical when it comes to the robustness of the results."

Their allegedly selective approach to existing data isn't the only accusation that has been levelled at Hsiang's team. "The second major error is that they confuse climate and weather," says Richard Tol, professor of economy at the University of Sussex in the UK. He notes that it does indeed appear that heat waves make people more aggressive, a conclusion reached by earlier studies. That, though, has more to do with specific weather events, he says, while climate change is measured in decades. Tol says that most of the studies considered by Hsiang and his team focused on specific weather events. "Their projections of the impact of future climate change strongly exaggerate the effect," he says.

Sociologist Nico Stehr, for his part, says that the "biggest mistake" made in the Hsiang study is that it "underestimates" human innovation "when it comes to dealing with weather or climate events."

The authors have been strident in defending themselves. It is certainly possible, they allow in a statement, that future societies will be better able to deal with environmental changes. But, they write, "it seems like hubris to just assume that 'this time things are different.'"

The team also denies having confused weather with climate. Rather, they say, their analysis showed that short-term and long-term changes in temperature have similar consequences for the frequency of conflict. Accusations of distorted data selection are likewise false, they say, claiming that they followed strict criteria in choosing studies for analysis. As a result, some studies that confirm a relationship between global warming and violence were likewise not included in their results.

Some experts are not convinced by the Hsiang-team defense. The researchers "compared apples to roller blading," wrote William Briggs, a professor of statistics at Cornell University in the US, in a sarcastic blog entry. "Data from last Tuesday was said to be equal in veracity to that culled from 8000 BC," and together it "produced lots of sharp graphics and one big quantitative result that hot, rainy weather is bad for you." That, he jokes, "is exactly why everybody is moving from Michigan to South Carolina ... to get to where the action is and join a gang." His verdict on the Hsiang study? "Complete and utter nonsense."

'Good for their Careers'

The manner in which Hsiang and his colleagues have responded to the criticism has done little to defuse the conflict. They label the accusations levelled by their critics as "FHC" or "frequently heard criticism." They allow that some of the critiques "are quite reasonable" but say that others "stem from a misunderstanding or misrepresentation of what we are trying to do in the paper." Still others "are patently false." In comments to SPIEGEL ONLINE, one of the paper's co-authors, Marshall Burke, had struck a similar tone, saying that most critics are "misreading our paper" or didn't read it at all.

Even though the Hsiang team stresses they "are not trying to pick fights," their statement contains some pretty strong language. "The handful of climate/conflict sceptics have garnered a lot of press by very publicly disagreeing with our findings and this has presumably been good for their careers," the statement reads.

Scheffran believes that such verbiage is an attempt to "use the reputation of Science and many mass media outlets which adopted (the Hsiang team's) point of view to introduce a sharp dividing line into the debate." It is a strategy which "transforms into outsiders scientists who take seriously a relationship between climate change and violence but who decline to label it a universal phenomenon" -- despite their having merely questioned the study's methodology and its scientific fairness. But, he says, you can't simply end a scientific controversy "with forced consensus."

Hans von Storch, head of the Institute of Coastal Research at the Helmholtz Center in Geesthacht says the spat reminds him of the debate over the hockey-stick curve. The graph is iconic in climate research, a reconstruction of the climate over the last thousand years. It is supposed to demonstrate that temperatures have rapidly climbed since the beginning of industrialization. Although some doubts were voiced about the accuracy of some of the details in the hockey-stick graph, "an attempt was made to ward off such criticism for political reasons," von Storch says. A similar phenomenon can now be witnessed in the discussion over the relationship between violence and climate change, he says. "Political motivations are leading to a circling of wagons."

Von Storch, though, also says that the editors of Science are partially to blame. "The peer review process didn't work," he said. "You need critical evaluators, which apparently didn't happen in this case."

A spokeswoman for the journal, though, says that she sees nothing disadvantageous in the debate. "Science is a self-correcting process," she wrote in an e-mail. "Researchers publish work in the scholarly literature so that it can be further scrutinized, replicated, confirmed, rebutted or corrected. This is the way science advances." 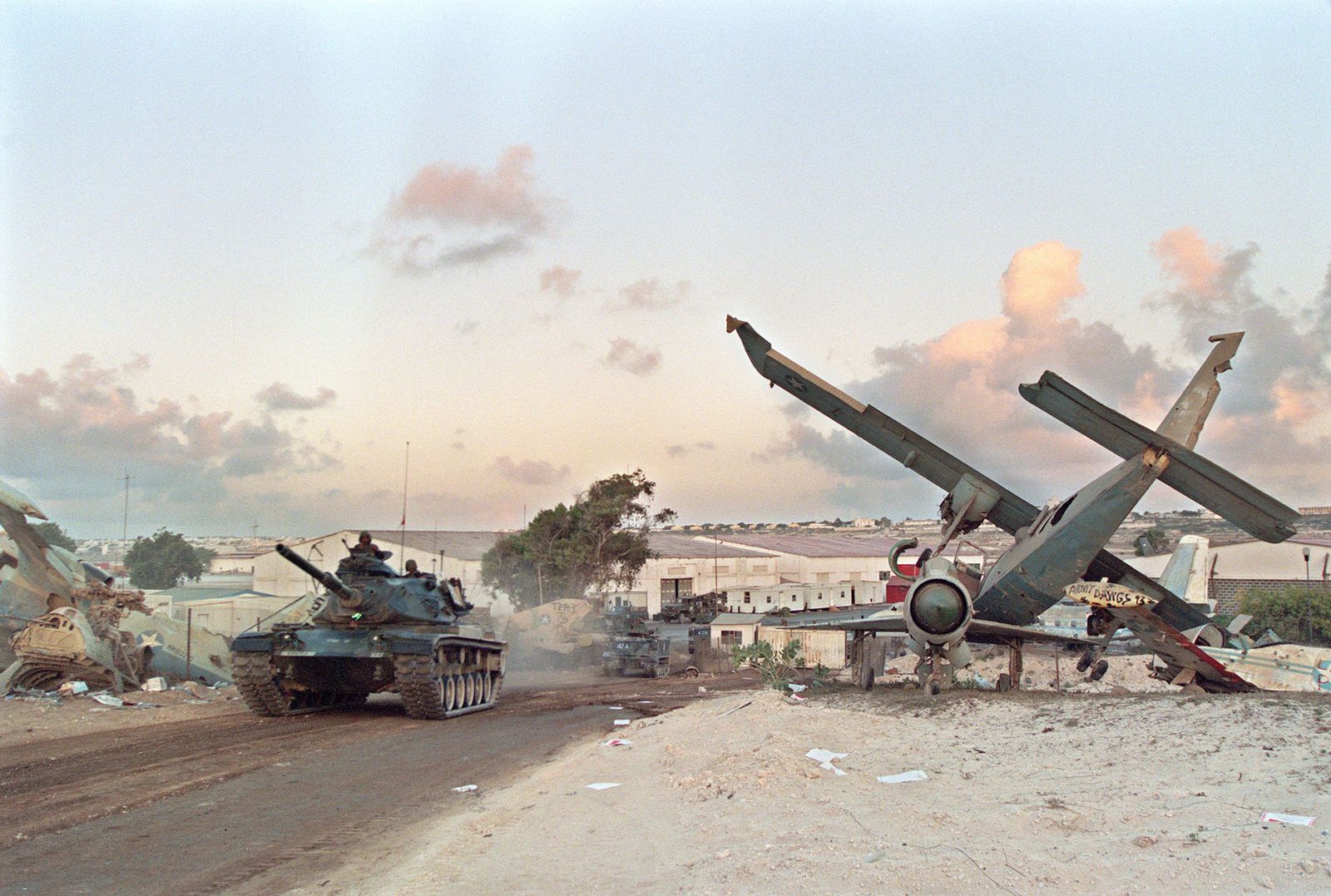 To what extent does climate affect violence?