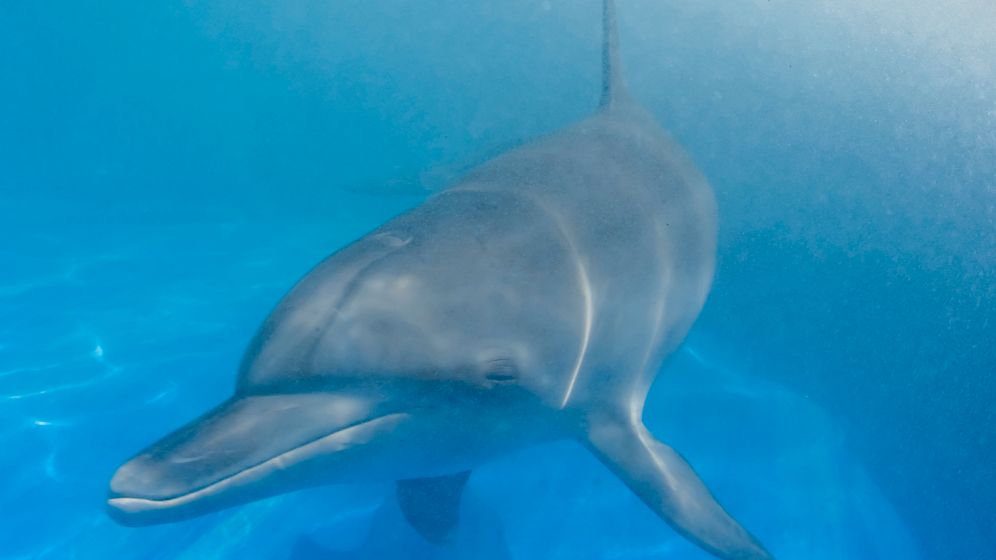 Their social lives are complex, and they can congregate in large groups. Their heart rates increase when they notice a family member suffering. They sound the alarm when they discover food or a potential threat. And experiments have shown they even anticipate future events.

Chickens, says Gregg, "are not as dim-witted as popular opinion would have us believe." He adds, "Some of these complex behaviors have also been observed in dolphins."

Really? Are chickens as smart as dolphins? Or, to put it differently: "Are dolphins really smart?" This is the question Gregg, a zoologist with the US-based Dolphin Communication Project, asks in his new book of the same name. And he isn't the only one finding fault with Flipper's brainpower.

For more than 50 years, the dolphin has been viewed as an especially intelligent creature, grouped together with human beings and great apes. But now a dispute on the subject has erupted among scientists, and the smart aleck of the seas may end up being just an average mammal. "We put them on a pedestal for no reason and projected a lot of our desires and wishes on them," says neuroethologist Paul Manger of the University of the Witwatersrand in South Africa. According to the professor, the claims that dolphins have a particularly complex brain, use a sophisticated language, are self-aware and can use tools are nonsense.

In some cases, says Manger, dolphins -- which are small whales -- are even outdone by goldfish. When goldfish are placed in a bowl, he explains, they at least try to escape by boldly jumping out, whereas dolphins that have been captured in nets won't even think of jumping to freedom. "The idea of the exceptionally intelligent dolphin is a myth," Manger concludes.

Origins of the Dolphin Myth

In the 1950s, physician and neuroscientist John Lilly played the crucial role in the elevation of dolphins from the status of stupid, fish-like creatures with excellent swimming skills to that of underwater know-it-all. In eerie-sounding experiments, Lilly attached electrodes to the brains of living dolphins to stimulate neurons. One day, a dolphin hooked up to his equipment began making loud noises as it approached its horrible death. When Lilly slowed down and played back the audio recordings, he concluded the dolphin was trying to communicate with its tormenters.

After further experiments, Lilly became convinced dolphins had a human-like faculty of speech and attempted to establish contact with the marine mammals. His desire to communicate was so great he administered LSD to himself and the dolphins in the hopes of stimulating conversation.

He soon moved to the American West Coast, where he became a spiritual leader of the hippy generation and wrote books in which he combined New Age ideology with half-baked dolphin research. The animals, Lilly gushed, were "more intelligent than any man or woman." He even attributed them philosophy, ethics and an "ancient vocal history."

Lilly's muddled legacy shapes our image of dolphins to this day. Artists paint watercolors of the animals swimming through outer space. In popular lore, dolphins serve as ambassadors of peace and unconditional love, and, the more out-there believe they possess miraculous healing powers and can teleport space-age settlers to Mars. Behavioral scientists, along with most reasonable people, agree this is all nonsense. Still, the size of dolphins' intellect remains a matter of dispute.

What's a Big Brain Worth?

One measure scientists use to determine a creature's intelligence is brain size -- given the theory that the more a brain weighs relative to the body, the smarter the animal. A human brain, which weighs about 1,300 grams (46 oz.), makes up about 2 percent of body weight. A chimpanzee's brain comprises 0.9 percent of its weight, while the corresponding number in elephants, with their brains weighing in at more than 4.5 kilograms (9.9 lbs.), is 0.2 percent. Dolphins do well by comparison. The brain of a bottle-nosed dolphin, for example, weighs more than 1,800 grams, or 0.9 percent of its average body weight.

It seems logical that dolphins deserve to be included in the animal Mensa Society. But does a large brain mean the same in marine mammals as it does in terrestrial animals? In 2006, Paul Manger noted that whales developed a large brain in order to keep the organ from becoming hypothermic, and thereby useless, in cold water.

Manger described an unusually high density of so-called glial cells in the animals' brain matter. He explained that these cells act like tiny ovens to keep the brain warm. Besides, he added, dolphins have a relatively simple brain structure, and noted: "The essential features of complex neural processing of information, as observed in other mammals, are missing or poorly developed."

No Better Than Mealworms?

Manger has now upped the ante with a new paper in which he claims behavioral studies involving dolphins are flawed and therefore not very informative. For instance, while zoologists have observed that dolphins can distinguish between the concepts "many" and "few," Manger notes: "This has also been demonstrated in yellow mealworms."

On the other hand, some bottle-nosed dolphins on Australia's west coast have learned to hold sponges over their snouts while they root around on the ocean floor. Is this a case of tool-use, indicating a high level of intelligence? Manger is skeptical. "Exactly what the dolphins do with the sponges remains unknown," he says, noting that the evidence they use them as tools is "flimsy."

Another example is dolphins' alleged talent for language. In one experiment, researchers were able to teach bottle-nosed dolphins 40 symbols. The animals were even capable of correctly interpreting combinations of the symbols, Manger admits, but African grey parrots and California sea lions can also learn this type of symbol-based language.

The scientific community is similarly divided over what zoologist Gregg calls "Dolphinese." It is known that every dolphin can identify itself with its own "signature whistle." The marine mammals use many other acoustic signals, he adds. But is this truly special? The tail-wagging dance of bees is also very complex, says Gregg. "It's probably not the case that dolphins have their own language, which is as complex as human language," says the expert in animal communication.

So is the dolphin actually the dummy of the seas? Most dolphin researchers are offended by such remarks. "To put it bluntly, most of that is bullshit," says Karsten Brensing, a marine biologist with the organization Whale and Dolphin Conservation (WDC). Manger and Gregg are losing sight of the "total package" when they compare the marine mammals' individual abilities with those of mealworms or bees, he says. "You can use similar arguments to prove that people aren't intelligent."

Lori Marino, a neuroscientist at Emory University in Atlanta, also has strong objections to Manger and Gregg's conclusions. "We shouldn't dismiss decades of peer-reviewed scientific work," she says, noting there are overwhelming indications that dolphins possess a high degree of intelligence. For instance, scientists have observed how the animals work together to encircle schools of fish. To cultivate relationships, they spoil each other with their own form of "petting" behavior. And in a struggle for power, males will join together to form networks.

Marino even believes that dolphins can recognize themselves. In a famous experiment, she and psychologist Diana Reiss drew markings on the bodies of two dolphins. Then they held up a mirror to the animals. They were fascinated to observe the animals turning around like divas in front of the mirror, presumably to examine their new body decorations.

For Marino, this is evidence of self-recognition, similar to what has been observed among great apes. She and other scientists even want to see the animals given the legal status of persons and granted "some fundamental rights," such as the right to bodily integrity.

None of this convinces Manger, who has a low opinion of Marino's mirror experiment. "The visual acuity of dolphins is actually not good enough to be able to readily perceive such marks," he says, and is critical of what he calls "serious deficiencies" in the design of the experiment.

Manger is accustomed to his theories being rebuffed. When he questioned the special features of the whale brain in 2006, dolphin fans called upon Manger's university to suspend him. But he merely wants to prevent the marine mammals from being anthropomorphized. Interpretations of behavior based on "personal bias" are not helpful, says Manger. "Conservation strategies should not be based on unrealistic expectations."

Gregg's primary objective is also to debunk the myth. "We have to stop describing them as 'special'," says Gregg.

It is becoming increasingly apparent that the marine mammals' intellectual abilities are by no means unique in the animal kingdom. "Many other species-from sharks to earwigs to rats-lead equally wondrous and worthy lives," he writes.