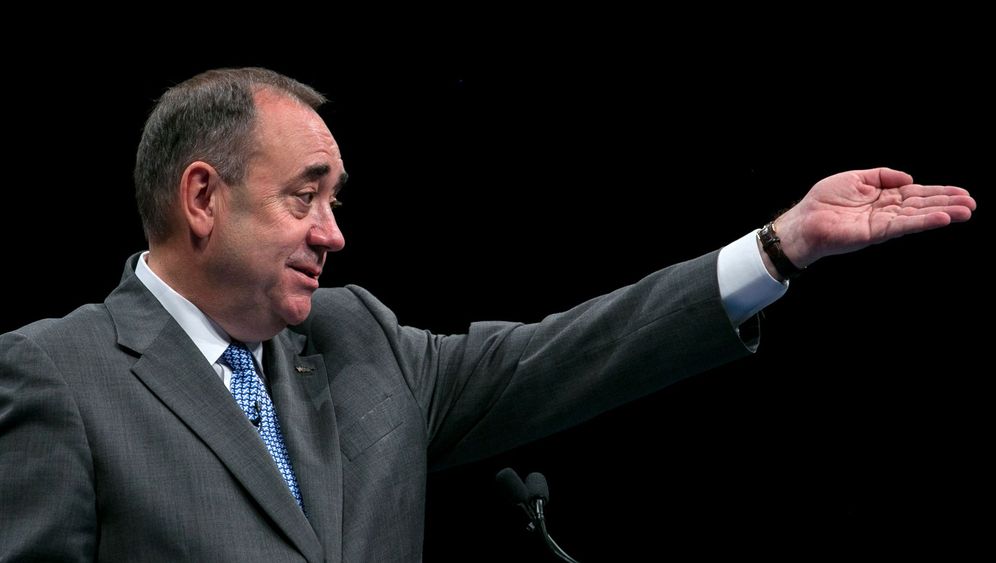 Photo Gallery: Scotland on the Edge of Secession

When Alex Salmond is nervous or restless, he scrapes his right thumbnail over the back of his left thumb as though scratching an itch. It's a minor tic, one that only becomes apparent after spending some time with him. Salmond has been Scotland's first minister, a position akin to prime minister, for seven years and is fighting to split off from the United Kingdom. This Thursday, the Scots will vote in an independence referendum and polls indicate that Salmond is closer to his goal than ever.

Perhaps not surprisingly, he has developed a callous on his left thumb.

An assistant places a cup of Earl Grey tea on the table. Salmond is sitting in a café at the Foxlane Garden Center near Aberdeen, the port city in Scotland's northeast. Torrential rain is pouring down outside the window, but the first minister is beaming as if it's springtime. The day before, over 200 Scottish businesspeople had declared in an open letter that they planned to vote for independence, including the owner of the garden center. Salmond has come to thank the man.

For several months earlier this year, Salmond's opponents could relax, comfortable with the survey lead they enjoyed. But since August that lead has dwindled, and last week, in a poll conducted by YouGov, the separatists reached 51 percent support for the first time once undecided voters were taken out of the equation. Another poll found the pro-union side ahead once again, but with only a meager 52 percent support.

Since then, panic has made the rounds in Westminster. Prime Minister David Cameron, his Deputy Prime Minister Nick Clegg and Head of the Opposition Ed Milliband hastily travelled up north last week to advocate for the 307-year-old union with England. In a passionate speech, Cameron said it was a "decision about the next century."

Salmond takes a satisfied glance around the garden center and then explains how his wife tried to start her own asparagus patch in the garden at home, about 50 kilometers north of here. "That's a challenge in Aberdeenshire," he says. His laughter is loud and rumbling.

Salmond, the architect of this referendum, will turn 60 this year. The fight for an independent Scotland has been his life's mission, and decades of work have led him to this point. His fellow Scots call him -- half derisively, half admiringly -- "King Alex." Even so, many Scots will vote for independence on Sept. 18 not because of, but despite Salmond. Forty-three percent say they are dissatisfied with their first minister; many voters find him self-satisfied and arrogant and believe he is motivated by a thirst for power.

At first glimpse, Salmond -- with his coarse hands and thickset stature -- looks like an affable farmer stuffed into a suit. He is an easy man to underestimate, as the elites did for a long time. Politicians in London had recognized Salmond's political talent and audacity when he moved into the House of Commons in 1987 on behalf of the Scottish National Party, but nobody thought the Scots would be reckless enough to want to split from the United Kingdom. Just one year ago, the pro-union side was 30 points ahead of the separatists.

But the first minister did a lot of persuading. Salmond has a quality that is very helpful for a politician -- he can create a bond with people. He is a highly gifted speaker and self-confident enough to not always take himself seriously. At a mid-August podium discussion with the historian Tom Devine in Edinburgh, it took him less than two minutes to win over the audience with a few self-deprecating remarks.

During the second TV debate against Alistair Darling, his pro-Union adversary, Salmond was relaxed, repeatedly stepping away from his podium towards the audience. It helped him win the debate in a rout.

But behind the façade is a politician who can also be merciless. His advisors handle him with a mixture of awe and fear of making a mistake. He is considered a hardworking perfectionist who gets loud when he doesn't like something.

It plays to Salmond's advantage that he has an optimistic message to deliver -- unlike the pro-union side, which, for a long time, could only offer a continuation of the status quo. And he had a strategy, as well as the will, to reach his goal from the start. "This kind of a referendum only happens once in a generation," he says during the visit to the garden center.

Will it be difficult to unite Scots after the vote, no matter how it turns out? "We're a country with a balance of opinion. We are not a divided country," he answers. The two sides are almost the same size, and are passionately fighting for their positions, "but we're debating independence in an entirely peaceful fashion." As far as he knows, there hasn't even been a bloody nose. He says he will accept the results of the referendum even if the Scots choose not to follow him.

His private life has always been inconspicuous. He has been married to Moira, the daughter of an auto mechanic, for 33 years. She is 17 years older than him and there are only few photos of her in circulation. Salmond met her when he worked in the Scotland office of the British government in the 1970s -- she was his boss. They married in 1981. The couple has no children and lives secluded in an old mill in the village of Strichen, north of Aberdeen. "Salmond is a very private person," David Torrance wrote in his biography, "Against the Odds."

In the 1990s, Alex Salmond built the SNP up from a nostalgic-patriotic movement into a modern center-left party. It is opposed to military interventions abroad and would like to make Scotland into a nuclear weapons-free zone. Salmond led the SNP into government in Edinburgh for the first time in 2007 and now enjoys an absolute majority in the Scottish parliament. He knows how to win over working-class voters; the competition from Labour, Liberals and Conservatives is weak.

Two days before the visit to the garden center, he has an appointment with the workers at the Ferguson shipyard in Port Glasgow. It was founded in the early 20th century and is one of the last ones in the country. Now, 77 workers are worried about losing their jobs here. Salmond, though, is there to deliver good news: Through his help and thanks to public pressure, an investor has been found.

But the journalists present aren't interested in the shipyard, instead asking why the Scottish first minister wants to split up the United Kingdom. Salmond becomes annoyed. He grumbles into a Sky reporter's microphone that he should stop imitating his opponent, Alistair Darling, with his questions. "Get with the debate, man! The people of Scotland are there. Maybe Sky News will catch up." For English journalists, Salmond is a figure of scorn, and with few exceptions all newspapers are against him. But he seems to draw energy from that.

Like many Scots, Salmond grew up with the belief that his homeland is a poor hamlet that would never survive without the South. He didn't change his mind until he began studying economics. Salmond became political during the 1980s because of Margaret Thatcher -- as a result of her cuts to social welfare, privatizations and the poll tax that was introduced in Scotland one year earlier than in the rest of Great Britain. The Iron Lady inspired an entire generation of Scottish patriots, among them Angus Robertson, one of Salmond's oldest confidants.

Robertson pushes open the door of an Indian restaurant in Elgin, one hour northeast of Inverness. He has just been canvassing, and is flush with excitement. Robertson joined the SNP in the mid-'80s as a teenager, managed two Scottish elections and has a leading position in the campaign for the referendum. As a student he worked in Salmond's electoral-district office, handed out pamphlets and knocked on doors. He is now 45, and all in all, little has changed in his political life.

Robertson is part of a generation of determined young SNP politicians, including Deputy First Minister Nicola Sturgeon, SNP Party Chairman Peter Murell and the Scottish secretary for rural affairs, Richard Lochhead. "We all knew each other as kids," Robertson says. They form a cocoon around Salmond, and are loyal to the point of self-denial -- another reason for SNP's success. "Alex expects the highest standards of everybody," Robertson says. Even though they've known each other for 28 years, he hesitates to call the first minister a friend. "We are on friendly terms with each other," says Robertson. Salmond doesn't have any friends, he has allies.

Salmond is now at the high point of his career, even if the strength of the campaign for independence isn't entirely his doing. "Alex was very lucky as a politician," says Alexander Bell, a former advisor to the first minister.

Salmond has touched a nerve with the Scots. Without the euphoria among the members of the working class who are closely attached to the SNP, the movement would have petered out long ago. As a result, the fact that Salmond can't -- or doesn't want to -- clear up many questions about the referendum hasn't had much impact. Question like: which currency an independent Scotland would have; how the British national debt would be divided up; or how much oil is left in the North Sea.

Indeed, it is possible that the person most surprised by the separatist movement's success is Salmond himself. In the last few days before the referendum, in the garden center near Aberdeen, he seems like a man who is enjoying his triumph. He calmly finishes his tea and disappears into the rain.