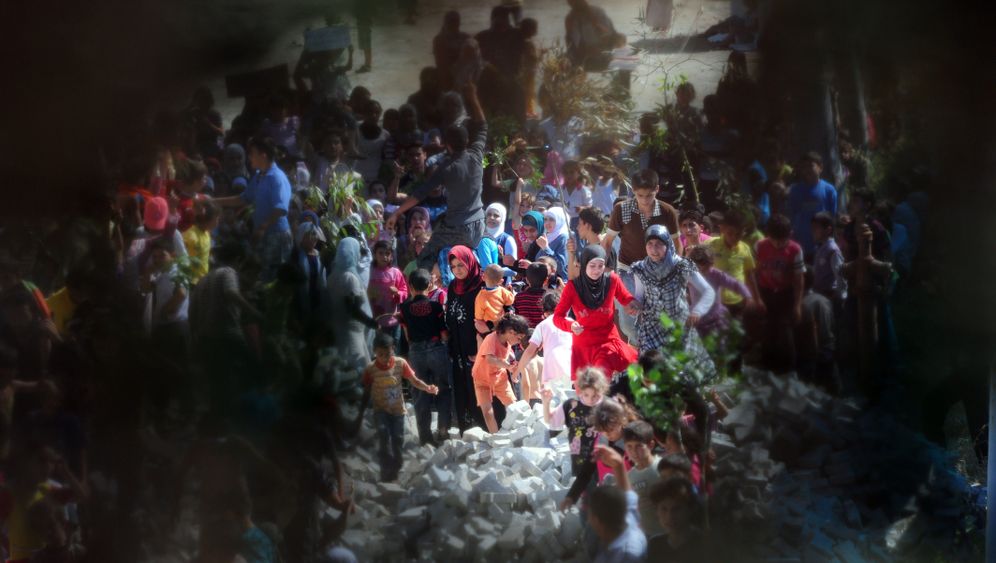 The limit for Mustafa L. came when his next-door neighbors were shot and killed. His wife was eight months pregnant -- not an ideal time to be packing and heading to a new country in search of a new future. Many people had already been killed by the Syrian army, randomly and without reason. Still L. and his wife had kept telling themselves that their home village of Zaini was safe and the violence would not reach them.

"But then they arrived in their military jeeps. They jumped out and killed the neighbors. The entire family," says L. as he sits on the floor and smokes. With his left hand, he rocks his two-month-old daughter's cradle. He's smoking a lot these days. "Nerves," he explains.

His home village of Zaini is a couple of kilometers away from the northwest Syrian city of Jisr al-Shughour, some 10 kilometers (6 miles) from the Syrian-Turkish border. L. suspects that the situation will only get worse and nobody will be safe from the soldiers, insurgents and gangs. Together with his pregnant wife and her sister, L. fled by foot to the border. The three found a place to stay in a tent city on the Syrian side. "That's where my daughter was born, in April," he says, smiling. "The Turkish soldiers wouldn't let us pass but one day it rained and the watchmen retreated. We knew that was our chance. We cut a hole in the fence."

L. returned to Syria this past week as secretively as left it. "I only wanted to see my parents and siblings, because we had heard on the radio that the army was shooting on Jisr al-Shughour." Soldiers who had deserted the army and turned on President Bashar Assad's regime had reportedly entrenched themselves there. According to refugee reports, heavy battles resulted on Sunday, with the army ultimately regaining control of the city. L. returned to Turkey on Monday. "I saw corpses that were swollen from the heat. The soldiers were shooting at anything that moved -- people, animals, adults, children. Everything," he says.

'Assad is a Murderer'

L. did not want to wait in Turkey and crossed back into Syria illegally. He had made sure that his family in Turkey was safe with an acquaintance in the city of Antakya. "We are thankful that someone is caring for us," he says, adding that he will "never again" return to Syria. He cannot forget what he has seen, especially the images of his dead neighbors. "Assad is an evil person, a murderer. He hates his own people. Why should I want to live in his country?" L. asks. But now the former salesman has to find a job. "It will be difficult, I don't have any papers. But if they send me back to Syria, my life will be in danger," he says.

None of the refugees want to return to Syria, at least not as long as Assad remains in power. "Syria is our home, but our home has cast us out," says Abdul, one of thousands of refugees that Turkey has officially allowed into the country. Abdul now lives in a refugee camp in Yayladagi, in the far southeast of the country. From here, it's possible to look across the border to Syria. In this camp alone, more than 9,000 people have reportedly found shelter.

A few thousand more are staying in Altinözü, some 30 kilometers to the north, where the Turkish government has converted a state-owned tobacco and alcohol warehouse into a refugee camp. "The sports hall wasn't big enough anymore," says one policeman. From the camp, one can hear children playing, people talking, the sounds of laughing and eating, and the clatter of silverware. Women are hanging laundry while some men are playing cards underneath the trees. The Turkish Red Crescent has set up hundreds of tents and the trucks that transported the materials are still standing outside.

The fence is covered with blue tarpaulins to shield inhabitants from view, but there are holes in some sections. "No entry for reporters!" a police officer says at the entrance. Journalists from around the world have been trying to get in for days. Even United Nations workers have reported difficulty gaining contact to the refugees. "But as far as we can tell, the aid operations are exemplary," one UN man said.

On Friday, actress Angelina Jolie is expected for a visit in Yayladagi to increase awareness of the refugees' plight and ease entry to the camp. In the camp itself, people can talk of nothing else. Everyone knows Angelina Jolie, and everyone hopes to meet her personally.

The medical clinic is located directly at the camp's entrance, where one sees men and women with bandaged legs lying in beds. "The Syrian soldiers fired immediately when they saw someone fleeing," says one refugee through the fence at the Yayladagi camp, where speaking to people inside is possible if no police patrol is underway. "Those who made it, often came away with gunshot wounds to their legs," says Abdul. The most severely injured have been taken to a hospital in Antakya. Another man inside describes how he saw a number of people with gunshot wounds bleeding on the streets.

Their greatest worry is that they'll be sent back to Syria, Abdul says. "Even when Assad promises us safety, who can guarantee that we won't be murdered a few weeks or months later when no one is paying attention to what is happening here anymore?" he asks.

Another refugee, a military deserter, says it looks as though protests will increase in Syria. "Perhaps even today after the Friday prayers," he says. Rumors of an impending uprising are circulating, in addition to talk that thousands of people have fled to the border in the last few days and are now waiting for entry to Turkey.

Mistrust of the Refugees

Meanwhile Turks in Yayladagi, Altinözü and Antakya have mixed feelings about the refugees. "We hear the stories they are telling," says one merchant in central Yayladagi. "It's bad. We must help them." His wife has posted a sign in their grocery store that reads: "Welcome to Turkey." "But of course they can't stay here forever," he adds.

The refugees are "poor people without a future," another salesman in Altinözü says. That's why they came to Turkey, he adds.

Others say they don't believe what the refugees are saying about the situation in Syria, where state television has reported that there is no democratic movement, but Islamist extremists and violent rebels instead.

"These people and those who are poor are using this opportunity to come here," the owner of an Antakya telephone store says. "We don't know what to believe," adds his business partner. "One hears so much that turns out to be wrong in the end."