It wasn't what serious coup attempts generally look like. And the rebellion led by a Georgian army tank unit based outside Tbilisi collapsed almost as soon as it had started. The soldiers laid down their weapons and surrendered without a shot being fired after President Mikhail Saakashvili publicly threatened to quash their revolt by force.

Before laying down their weapons, a spokesman for the alleged coup leaders had announced that he and his comrades could no longer "accept the current domestic political situation." As they saw it, Saakashvili was pursuing a "process of destroying the country." Of course, such words sound more like a cause for everyday dissatisfaction rather than a clear plan for seizing power by force.

An interview given by Georgian Ombudsman Sozar Subeliani to the independent news agency Civil Georgia reveals just how much tension is brewing in Georgia's military forces. Subeliani and his colleagues recently probed the current circumstances in Saakashvili's army. The soldiers complained to him about a "lack of medicines, water and food." They were forced to chop firewood for their superior officers, despite the fact that the military unit itself had no sufficient heating. Such complaints suggest the Georgian troops are similar to Russian soldiers, their enemies to the north, who have often complained of similar conditions.

The Limits of Ambition

Saakashvili likes to watch his army parade down Tbilisi's Rustaveli Boulevard bearing weapons, uniforms and steel helmets from the United States. It fosters the impression that his army has been modernized. Approximately 150 American military advisers are working frantically on transforming the Georgians into soldiers that might be fit enough to join the NATO alliance. But the reality is sobering. While Saakashvili repeats the claim that his country is ready for NATO membership, if you trust what the ombudsman reports, the country's military forces actually have much more in common with the military forces of a Third World country.

When the president addresses his own people rather than Western politicians, diplomats or journalists, Saakashvili already admits that he rules over a land of paupers. While touring a textile factory in the province of Ajaria on Monday, he told workers there that "Georgia's main enemies are unemployment and poverty." Since the end of its violent conflict with Russia last summer, Georgia's foreign trade has contracted by 70 percent and foreign investments in the country have dropped by two-thirds. 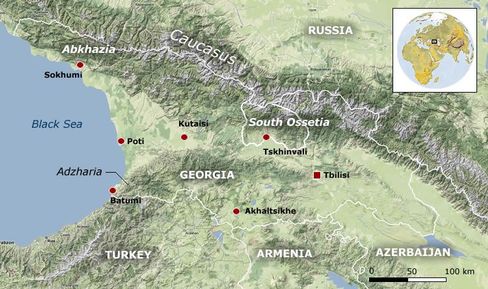 Georgia and its surroundings

For centuries, the primary market for Georgian products -- such as wine, tangerines and vegetables -- has been in Russia. But as long as Saakashvili remains president, Russia refuses to re-establish diplomatic relations or even negotiate trade relations. Russia accuses him of having started the war in August by attacking the city of Tskhinvali, the capital of South Ossetia, which is predominantly inhabited by people who enjoy Russian citizenship.

The five-day war ended in Georgia's greatest defeat since declaring its independence in 1992. In the wake of Russia's victory, Georgia lost all control over Abkhazia and South Ossetia, two of its former provinces. But the war also cost Georgia access to Russian markets, which will condemn the country to poverty for years to come. Widespread poverty has spawned massive demonstrations from opposition forces clamoring for Saakashvili to step down and usher in new elections.

Show Trials for the Opposition

Were new elections to be held, Georgia's constitution would not permit Saakashvili to declare himself a candidate for re-election. It also seems exceedingly doubtful that he could succeed in helping a successor -- whom he approved of -- get elected. Under these circumstances, he prefers to cling to power and denounce members of the opposition as would-be henchmen of Moscow. Saakashvili has already been hallucinating about pro-Russian coup plots since November 2007, when massive demonstrations by his opponents led him to declare a state of emergency.

The extent to which the authorities will go to combat Georgians who are thought to be sympathetic to Russia can already be seen in a court case from September 2006. At that time, a court in Tbilisi sentenced a man to several years in prison for allegedly being involved in a coup plot. The man had been a member of the party Justice, led by Igor Giorgadze, a former minister of state security, who was living in exile in Russia.

In what turned out to be a show trial, Giorgadze's niece Maia Topuria was sentence to 8.5 years in prison. And Revaz Bulia, the party's secretary, who had been legally residing in Tbilisi, was given 4.5 years.

The party, which did not find much popular support, never presented a real threat to the state. And now that Abkhazia and South Ossetia have been lost to Russia, which unilaterally declared their independence, groups in Georgia that harbor sympathies for Russia have even less popular appeal than before the war. This doesn't mean that the Russian intelligence services will try to prevent a few of their puppets in Georgia from fomenting armed revolt. Indeed, as far as they are concerned, they aren't shy about expressing their desire to see Saakashvili depart from the political stage -- whether as the result of a democratic process or in a body bag.

In the 1920s, the Soviet journalist and writer Isaac Babel described Georgia as "seething like cheap wine." The next major conflict between those in power and the opposition will come on May 8, when the latter plans to block the central highway linking the country's western and eastern parts. Chances are that Saakashvili won't wait long before coming down with hard countermeasures.