In Copenhagen, the outlines of a dangerous world were there for all to see. The climate summit did not end in a fist fight between tens of thousands of people, despite the fact that serious global problems were not resolved. Barack Obama did not have to fly out from the roof of a burning conference center. Nevertheless, it was palpable that this is a world in which trust is harder to come by than oil, and where there is more mistrust than CO2 emissions.

And yet Copenhagen has proven that trust is the most important resource for the transformation of the current oil-based system into a green civilization. It is more important than all the money that will be required for new technology, more efficient machines, dams and the survival of forest inhabitants.

It is a question of trust that China does not flood Europe with even more products made using cheap coal-based power, instead of replacing coal with alternative power stations; that Europe is not isolated as an island of environmentalists, while in Africa entire countries are becoming inhospitable; that climate aid amounting to billions does not land in private bank accounts in Africa, while there is not enough money for schools in the donor country; and that America does not come to rely on cheap oil, while China and India curb their fossil fuel consumption for reasons of climate protection.

In order for 9 billion people to live together on one planet, a circle of trust is required, one that rewards solutions and punishes the wrong economic activities of the past. That does not describe some kind of paradise. Rather it is the prerequisite for preventing a world without hope. In Copenhagen a vicious circle of mistrust came in to being, one that engulfed all the good intentions and plans.

The climate deal that was presented by the leaders of the United States, China, India, Germany and around 20 other states was about as worthless as toxic debt from AIG. There are no concrete CO2 targets for 2020 and 2050, there is no clearly distributed financing of the promised $100 billion in aid pledged to developing nations to adopt CO2-curbing green technologies and help pay for the damage caused to those countries by climate change. And there is no consistent monitoring of reductions and of how they are to be achieved. To announce a target of limiting global warming to an increase of 2 degrees Celsius is meaningless as long as there is no limit to the CO2 that humanity allows itself to emit by 2050: 750 billion tons, according to the best available science. At the current level that would already have been emitted by the 2020s. Yet there was not enough trust to commit to this kind of CO2 budget. 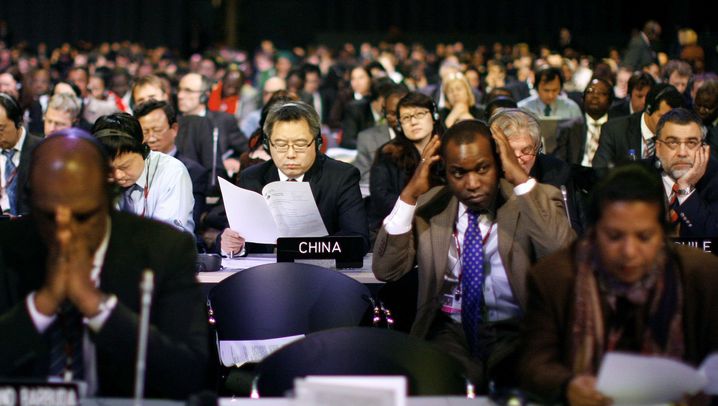 Photo Gallery: A Fiasco in Copenhagen

The deal reveals a crisis of trust between the states. The fact that Barack Obama flew in, gave a gruff speech, made a separate deal and then simply announced this -- before the international community had even been made aware of it or had agreed to it -- has corroded the UN process. Obama lacked the trust in this process and the courage to diagnose his own people with a case of energy obesity. Worse yet: At the first opportunity -- at the plenum -- it was not only the smaller Latin American states and Sudan that distanced themselves from the document, but also those who had helped draw it up: India, Russia and China.

'Chimerica Versus the World'

One could seek culprits for the debacle: " Chimerica" or the emerging countries, the EU, the G-8 or the G-77. The closest fit is "Chimerica against the rest of the world." However, the Europeans could also have done a bit better, by unilaterally upping their reductions target from 20 to 30 percent. That, however, was too much for Italy and Poland. There was plenty of selfishness to go around. Everyone wants to be the first to strike oil, but when it comes to the much more sensible policy of protecting resources, then it's all about waiting.

But the ideas being discussed at Copenhagen were solutions that would still be sensible even if climate change, despite expectations, turned out to be an illusion on the part of researchers. Fossil fuel reserves are limited, with oil falling into short supply within 40 years and coal within 120 years. The extraction of fossil fuels in Saudi Arabia is not only environmentally destructive, it also makes the potentate richer and terrorists more aggressive. Conserving oil, coal and natural gas is a requirement for security policies, foreign policy -- and even education policy. After all, money saved by a society on fuel imports is not only available for other forms of consumption, but also indirectly for new schools and teachers.

One of the few enlightening sentences uttered by former US President George W. Bush during his terms in office was that the West is "addicted to oil."

The extent of that addiction was apparent in many actors at Copenhagen, but especially in one. He only came for a few hours, but he was also decisively responsible for the chaos that marked the negotiations: James Inhofe, a Republican politician who does whatever he can in Washington to inhibit Obama's efforts to impose CO2 limits. He is not only ridiculous in describing climate change as made up by "the Hollywood elite," but outright dangerous. He would rather sacrifice American natural beauty at home and American soldiers abroad than to push his country to the forefront of a green technology revolution. For men of his ilk, oil and coal are tantamount to power, not a curse. They believe that Americans have a God-given right to release twice the level of emissions as the Europeans and four times as much as the planet's average inhabitant. "The Inhofe Supremacy" could be the name of a film about the man, because the primacy in the world he is trying to secure for his country is enormous. But there are plenty of Chinese, Indians and Australians who think similarly. Working together in Copenhagen, they prevented humanity from starting to work together to solve a number of shared problems -- to the detriment of every start-up investment that has the prospect of a hundred years of green profits.

Men like Inhofe, who in Copenhagen warned that nations shouldn't be "deceived into thinking the US would pass cap-and-trade legislation," have the effect of poison when it comes to the urgently needed global trust-building. As in nuclear disarmament, the expectation is pivotal that the other side will take the same difficult steps. But as long as the danger persists that a party could again come into power in America that would wipe the findings of climate science from the table and would rather send soldiers abroad than solar power engineers, then there won't be much trust towards the US. And the Chinese may be talking the talk on climate issues, but as long as they are only spending a small part of their enormous cash reserves on green investments, their credibility will be compromised.

The consequences Copenhagen will have on other policy areas should not be underestimated: How can negotiating partners be certain that something similar won't ensue when it comes to competition for natural resources? And how can people maintain hope that the megaproblems of our planet can be entrusted to the type of major summit round that just took place in Copenhagen?

The trust that is needed right now to revive the seriously injured political process can no longer be expected to come from the top down. Perhaps we now need a totally different coalition of the willing, of people who can set a lifestyle example that is easily adopted around the world. That movement would have to be more aggressive in its stances against special interests that have run astray, like those of the drug dealers in the oil industry. This could be the hour of a new global environmental movement, as Nobel Prize-winning economist Elinor Ostrom says. A movement that isn't just reflected in dutiful survey answers, but also in the new lifestyle choices it makes and in the persistence with which it raises pesky questions for companies and political parties.

How Much Respect Do You Have for Yourself?

Those who feel a sense of disquiet in light of the tragedy of Copenhagen, have good reason to be quite furious with the powerful leaders who have squandered this summit. It's okay to be enraged by the fact that political leaders are scaremongering about our future existence but at the same time are unwilling to accept solutions.

Then you have to go to the mirror and ask yourself: How much of Inhofe's mentality can I see in myself? How much respect do I deserve for treating the planet correctly? It will take millions and billions of affirmative answers in order to build the trust that can grow into a climate conference more successful than the one that just ended in Copenhagen. 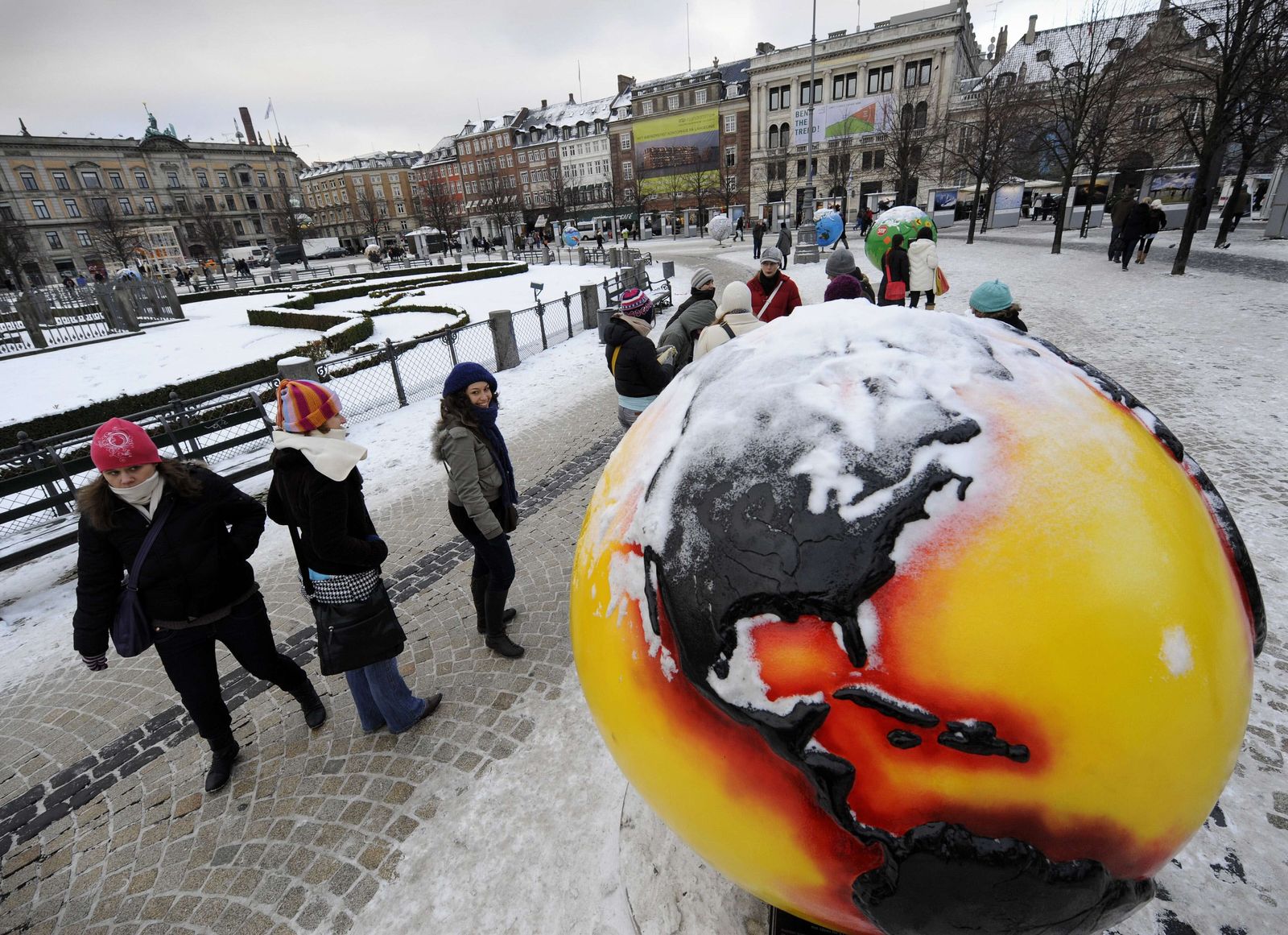 Copenhagen's conference ended without a legally-binding agreement to reduce emissions.