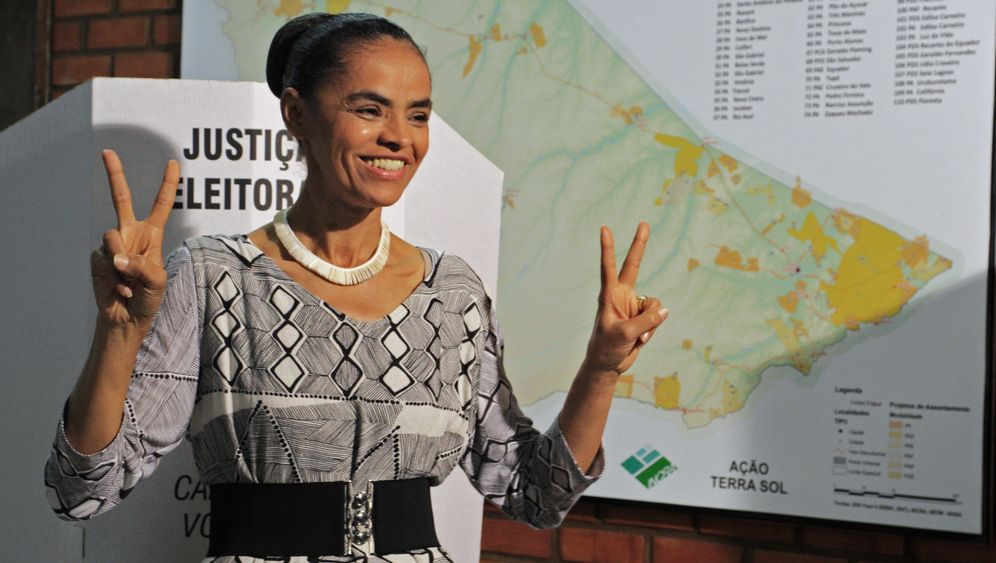 The secret winner in the Brazilian presidential elections is Marina Silva. Running for Brazil's highest office, she cornered almost 20 percent of the vote, more than she could have imagined in her wildest dreams. Her supporters are responsible for the runoff vote in four weeks time. Silva's voters will decide if Dilma Rousseff, the favorite candidate of President Luiz Inácio Lula da Silva, or the Social Democrat José Serra will move into the Palácio do Planalto at the start of January.

In Sunday's election Rousseff scored 47 percent, while Serra trailed with 33 percent. Both candidates will now try to woo the Green voters. The race could go either way: Marina Silva is going to hold a vote among Green Party members to determine which candidate she will endorse.

"We have broken with the notion that this election is a referendum (for or against President Lula)," the former environment minister shouted to her cheering supporters in Sao Paulo, some of whom shed tears of joy. "In the 21st century you cannot win an election without an agenda!"

That amounted to a slap in the face for Rousseff and Serra, who had both orientated their campaigns around the dominant figure of Lula. It was Silva alone who discussed issues with voters and challenged opposition candidates with concrete arguments. In the last few days before the election, aware of the surging sympathy for the Greens, she adopted a sharper tone. She pointed out that Lula was not everything in Brazil and that millions of Brazilians want more from their new president than economic growth and fighting poverty.

"Marina Presidente" her fans chanted inside the packed hall in Sao Paulo as she beamed and raised her fingers in a victory sign. Clad in a white trouser suit with her hair pulled back into a bun, she cut a slight, delicate form. She donned an elegant pair of designer glasses before she started to speak.

Silva, a former rubber tapper from a poor family in the Amazonian region, is the face of modern young Brazil. She embodies the dreams, wishes and demands of around 20 million mostly young, educated, urban voters: People who cannot identify with Rousseff and Serra. In Rio de Janeiro, which has always had a soft spot for rebels and outsiders, she outperformed Serra and came second to Rousseff. In some cases she also scored more than 20 percent in Sao Paulo, Belo Horizonte and most other million-strong cities in southeast Brazil, the most densely populated and richest part of the country.

For Dilma Rousseff, the 47 percent share of the vote on Sunday represents a defeat. She now has to ask herself: Did she lose support because of her awkward handling of a corruption scandal involving a close former colleague? Or did voters tire of the arrogance shown not just by her but also by her creator and patron Lula in recent days?

The fight for Brazil will not be decided in the poor northeast of the country, where Rousseff, thanks to Lula, can scoop up more than 80 percent of the vote in some regions. The heart of Brazil beats in the developed southeast, in Sao Paulo, Rio and Minas Gerais, where Lula's workers' party traditionally runs into problems. Sao Paulo and Minas Gerais remain in control of the social democratic opposition PSDB, whose candidates won the governorship elections in the first round on Sunday.

When, late Sunday night, Dilma Rousseff held a press conference in Brasília, the disappointment in the faces of the phalanx of government politicians accompanying her was plain to see. Rousseff promised to boost domestic consumption, fight poverty and improve the health care system -- the leading issues of her campaign. Environmental protection, climate change and other green issues have been non-starters for her -- she has no sense of ecology. She appeared tired and stressed, worn out from the campaign. The next four weeks will be a test of the candidate's durability -- both physically and psychologically.

But this election's true loser is Lula. It is possible that he was blinded by his own hubris: It turns out the Brazilian voters aren't a flock of sheep who blindly follow their leader to the ballot box without making any demands. Lula's greatest hope now lies in José Serra's poor performance. The Social Democrat isn't much more attractive to the Greens than technocrat Rousseff. He didn't mention the environment when he finally spoke before the press after midnight, either. He did, however, assure those gathered that he was marching towards victory. First he'll have to win the hearts of Marina Silva's supporters.

Lula's legacy, it now appears, was sealed on a sunny May day in 2008 in Brasília. On that day, he greeted German Chancellor Angela Merkel, who was on an official state visit to Brazil. Just before the meetings, his environment minister at the time, Marina Silva, called to announce her resignation. She had grown tried of her constant disputes with Rousseff, who was then head of Lula's cabinet. Lula had transferred responsibility for a number of major projects in the state of Amazonas to Rousseff, casting environmental concerns to one side. Prior to that, he had entrusted the strategic planning for the use of the rainforest to a new strategy minister whose preference was to industrialize the delicate eco-system and put it under the jurisdiction of the military.

Silva had already threatened to resign several times, but Lula succeeded in convincing his old political companion to stay on board. He needed her because she gave his government an air of glamour and competency on environmental issues. But when it came to the actual issue at hand, he remained unyielding. Growth was more important to him than protecting the environment, and the agriculture lobby loved him for that.

As Lula met with Merkel, his advisers continued to try to talk Silva out of quitting. But it was too late -- she had already lost any hope that she would actually be able to achieve anything in the government. At the time, she had already been thinking about going it on her own and possibly even seeking to run for the office of the presidency.

On Sunday, Silva took a step towards her dream of a greener Brazil.