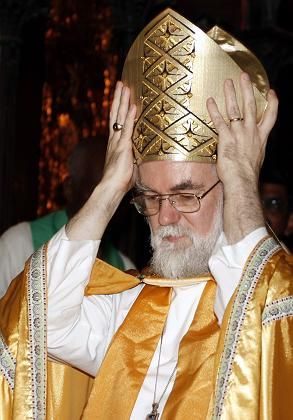 Archibishop of Canterbury Rowan Williams: "A Dangerous Threat to our Nation"

He should have known what he was getting into. Rowan Williams, 57, the archbishop of Canterbury, is an educated man, a noted poet and a brilliant theologian. But he's never been a very skilled politician.

And so it happened. Last Thursday, Williams stood before 1,000 spectators in London's Royal Courts of Justice. He's a man with a white beard and white hair sprouting in all directions. In his warm baritone voice, he spoke about the relationship between civil and religious law. It was a complicated speech, one that wasn't easy to understand. But it ignited a raging debate.

A day later, The Sun tabloid labeled him a "a dangerous threat to our nation," and the Daily Express wrote that he had capitulated to Muslim extremists. The tabloids used words such as "outcry" and "rage" to describe the public reaction and called for him to resign.

The archbishop, leader of the world's 80 million Anglicans, had suggested that Shariah, the Islamic legal code, should be introduced in Great Britain -- at least parts of it. He said that religious judges should be allowed to make rulings on some civil matters and that British courts should recognize those decisions -- in cases dealing with marriage, divorce or disputes, for example.

The archbishop said that it seemed "unavoidable" to him and that it could help bring about a better degree of social cohesion in the country. He sees "a bit of danger" in the fact that, in principle, there is only one set of laws that applies to everyone, and he believes that laws should not "(square) up with people's religious consciences." He stressed that, of course, "nobody in their right mind would want to see in this country the kind of inhumanity that has sometimes been associated with the practice of the law in some Islamic states," such as the stoning of adulterers and cutting off the hands of thieves.

The archbishop's ideas are not shared by many. "The prime minister believes British law should apply in this country, based on British values," the spokesperson for Prime Minister Gordon Brown coolly commented. Culture Secretary Andy Burnham labeled it "a recipe for disaster." Meanwhile, prominent Muslims said the comments would do little more than cause confusion.

Not One to Avoid Delicate Subjects

It's far from the first time the archbishop has irritated his countrymen. After Sept. 11, he said that terrorists could "have serious moral goals." He attacked "Christian Zionists" and claimed "the United States wields its power in a way that is worse than Britain during its imperial heyday." Before Christmas, he dismissed the story of the Three Wise Men as being little more than "a legend." 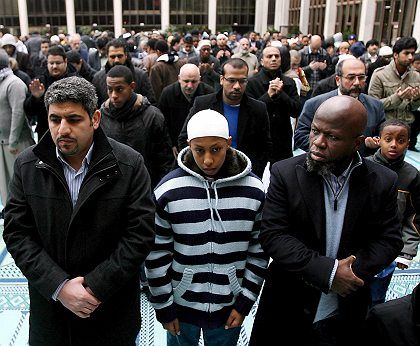 Muslims attending Friday prayers at a mosque in central London: "a haven of peace"

Now he has ventured into one of the country's most hysterical debates: relations between the British and the country's 1.7 million Muslim inhabitants. It is a debate that has become even more complicated since July 7, 2005, when Islamist suicide attackers killed 52 people in London.

Only a few weeks before Williams stoked up the fire with his Shariah controversy, another Anglican bishop unleashed a similarly bitter dispute. Michael Nazir-Ali, himself a native of Pakistan, leveled the criticism that Islamic extremists had turned parts of Great Britain into "no-go areas" and that it was getting more and more difficult for non-Muslims to live and work in those parts of the country. He claimed, critically, that it was "now less possible for Christianity to be the public faith in Britain."

Shariah is a touchy subject in the debate about the role of Islam. And to the horror of the British public, opinion polls taken of the country's Muslim residents show that up to 40 percent want the right to apply Islamic justice in their areas of residence.

A system of "Shariah councils" has long existed in Britain where Muslims can go to seek rulings on marital issues and other disputes. Although these rulings are not binding in any way under British law, many Muslim families still observe and adhere to them.

Fear of a Parallel Society

A fortnight ago, Britain's Channel 4 TV station showed a documentary about the "Islamic Shariah Council" in Leyton, in eastern London, where petitions are heard from at least a dozen Muslims each day. Bearded sheiks counsel men who have divorced their wives by mistake after yelling out the divorcing phrase "Talak" three times while in a state of rage. Or they counsel women who want to divorce their husbands -- a far more complicated matter.

"Shariah is knocking on the door of Britain," Sheik Suhaib Hassan, the council's general secretary, told the television team. "If Shariah law is implemented, we can turn this country into a haven of peace, because if a thief's hand is cut off, nobody steals. If once -- just once -- an adulterer is stoned, no one would commit this crime," he said. British society, he added, should acknowledge this system. "If they don't accept it, they'll need more and more prisons."

People like Hassan, with their efforts to promote parallel societies, instill fear in the hearts of many in Britain. That hasn't been lost on Prime Minister Brown, who in contrast to his predecessor Tony Blair, has emphasized the dominance of traditional British culture. To this end, Brown has proposed an "Institute of Britishness," he has spoken out against Islamic schools and he has introduced information packets for immigrants that stress British values and law.

And now the head of the Church of England wants to drive a wedge into the debate about national values?

Archbishop Williams obviously didn't anticipate the fierce row his speech would spark. He is said to be overwhelmed by the "hostility of the response." The BBC even reported he was in a state of shock. And speaking before the Church of England's General Synod on Monday, Williams sought to assure that he had never intended to suggest the introduction of a parallel jurisdiction. He conceded that his comments may have been unclear and "clumsily deployed," but refused to back down from his original speech."

The archbishop of Canterbury's situation is a bit reminiscent of that of Pope Benedict XVI, who was taken aback when he ignited the wrath of Muslims with the Sept. 2006 speech he gave in Regensburg, Germany. In his speech, the pope cited words spoken in 1391 by Byzantine Emperor Manuel II Palaiologos to a Persian scholar that had been quoted in a book by theologian Theodore Adel Khoury. "Show me just what Muhammad brought that was new, and there you will find things only evil and inhuman, such as his command to spread by the sword the faith he preached," Palaiologos is quoted as having said.

In fact, both Williams and Benedict XVI tend to be greater intellectuals than spiritual advisors, and both failed to appreciate that the leader of a church cannot express his beliefs as freely as a professor of theology. Or, as the Church Times once wrote: "The problem with Rowan Williams is that he can never remember that he is archbishop."