DER SPIEGEL: If the biotech company Colossal, founded by tech entrepreneur Ben Lamm and geneticist George Church, among others, has its way, the woolly mammoth will soon be trudging through the Arctic again. How would that work?

Victoria Herridge: The most important tool is the CRISPR gene scissors, which are to be used to insert several mammoth genes into the DNA of Asian elephants, for example, for a thick fur and for additional fat layers. The genetic material has been sequenced from animals that have been preserved in the permafrost of the Arctic for thousands of years. All of this is then to be introduced into an egg cell – but that alone is extremely complicated.

Victoria Herridge, 41, is an evolutionary biologist at the Natural History Museum in London. Her professional focus is on extinct elephants, particularly those species that lived in Eurasia during the Ice Age: mammoths and straight-tusked elephants. She is also one of the founders of TrowelBlazers, an organization dedicated to increasing the number of women working in the fields of archaeology, geology and paleontology.

Herridge: Because, as far as I know, it has not yet been possible to obtain egg cells from elephants in captivity. For the project, therefore, they are to be created by reprogramming stem cells from the elephant’s skin. The embryos created this way are then to develop in artificial wombs. In both cases, the technology is highly complicated, and we are only beginning to understand it. In addition, elephant surrogate mothers will also be needed for parts of the growth process.

DER SPIEGEL: And, ultimately, it wouldn't truly be a woolly mammoth.

Herridge: Yes, it's a genetically modified Asian elephant that can cope with the conditions of the Arctic.

A bronze sculpture of a mammoth in Khanty-Mansiysk in Siberia

DER SPIEGEL: Nevertheless, the creators of the mammoth project promise that the effects of climate change could be halted or even reversed with the project. How would that work?

Herridge: The mammoths were an important part of the Ice Age ecosystem. Back then, the steppe was covered with grass, which the animals fed on. Today, it's more likely to have shrubs and trees. If there was more grassland again due to the influence of the newly settled animals, this could potentially have positive consequences. These areas have a lighter surface, so they are less heated by the sun. In addition, the animals compact the permafrost in the ground through their trampling. This might protect it from thawing – and thus reduce methane emissions.

DER SPIEGEL: But for biological reasons alone, it would take a very long time before potential effects would even be felt.

Herridge: Yes, the gestation period in elephants is 22 months. Then it takes at least 10 years for a young animal to grow into an adult. For a herd, you would also need an experienced cow to show the others how to behave in their habitat. Otherwise, the animals wouldn't even know what they're supposed to be doing there. That means it would be many, many years between the start of the project and an actual impact of the animals on the Arctic environment.

DER SPIEGEL: According to estimates, there were at least hundreds of thousands of mammoths in Eurasia during the Ice Age. Would it take that many again to see positive effects?

Herridge: I can't give you an exact number. But during the Ice Age, there was an estimated one mammoth per square kilometer. So, if I want to have serious effects in the ecosystem, I'm going to need a whole lot of animals to do that. Sure, you could fence them off in some kind of park, but that would be unlikely to do anything, at least in terms of climate change.

DER SPIEGEL: During the last Ice Age, the mammoths had the steppe largely to themselves. Today, there are large cities in the Arctic. Would that be a problem?

Herridge: Wherever humans and elephants get too close to each other, there are problems. Both change their habitat. That creates stress and also makes elephant conservation quite a nightmare. However, the Arctic is sparsely populated on average compared to other parts of the world. But residents of an area where the animals are becoming native might find that quite annoying.

The skeleton of a mammoth

DER SPIEGEL: Generally speaking, what do you think of the revival of extinct animal species, known as de-extinction?

Herridge: In some cases I find it exciting, for example with the Tasmanian tiger or the northern white rhinoceros. It's clear that we humans are responsible for the fate of these species. Through appropriate projects, we can really make a difference. Overall, though, we have to ask ourselves why we want to revive species: To right a wrong? To limit the negative influence of humans? To create a world that benefits us more? We need to talk about these questions. And that's happening too little so far.

DER SPIEGEL: Those who believe they can revive animal species may also not be doing a good enough job of saving other species from extinction.

Herridge: Of course! When you have tools like that in your hand, you think less about your own behavior and its consequences. It worries me that we humans prefer to be interested in such shiny, high-tech projects as with the mammoth rather than in pragmatic species conservation projects that, if managed well, can actually make a difference. In the case of the Asian elephant, for example, it would be more important to take care of the habitats in Asia than to think about the fact that the animals could also live in the Arctic. The rainforest in which they live, this marvelous network of countless species, must be protected. 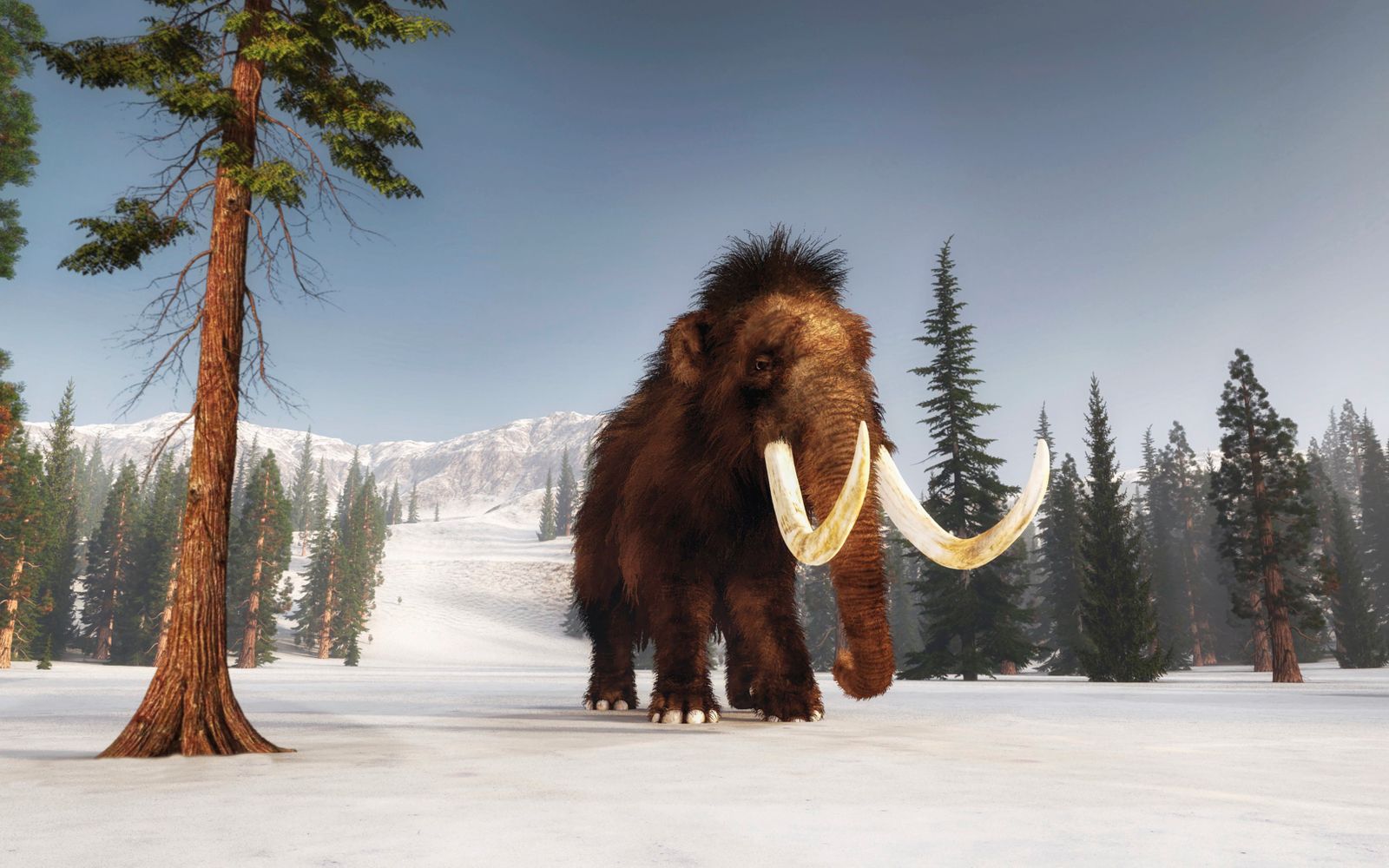 A rendering of the woolly mammoth in its natural habitat 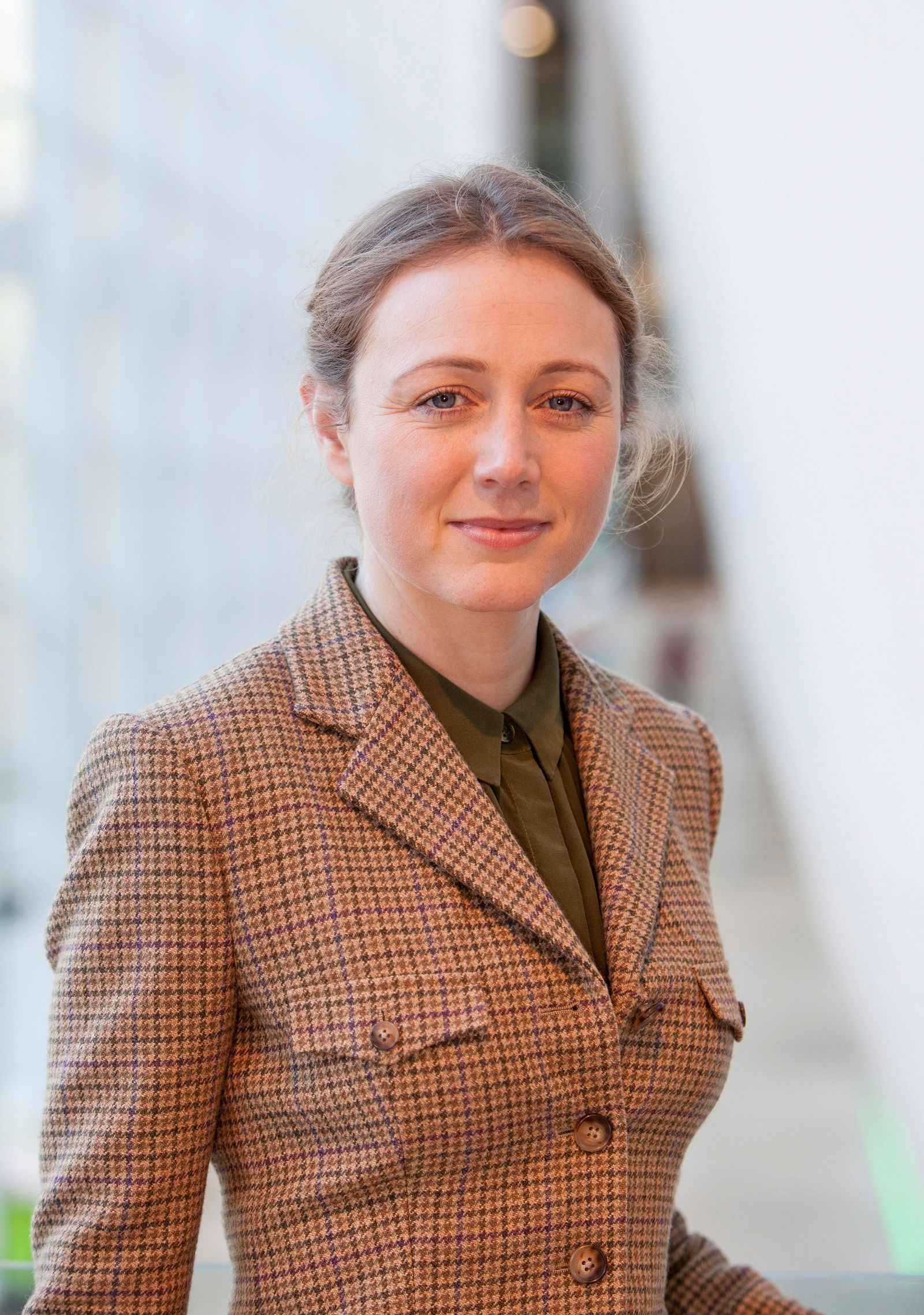 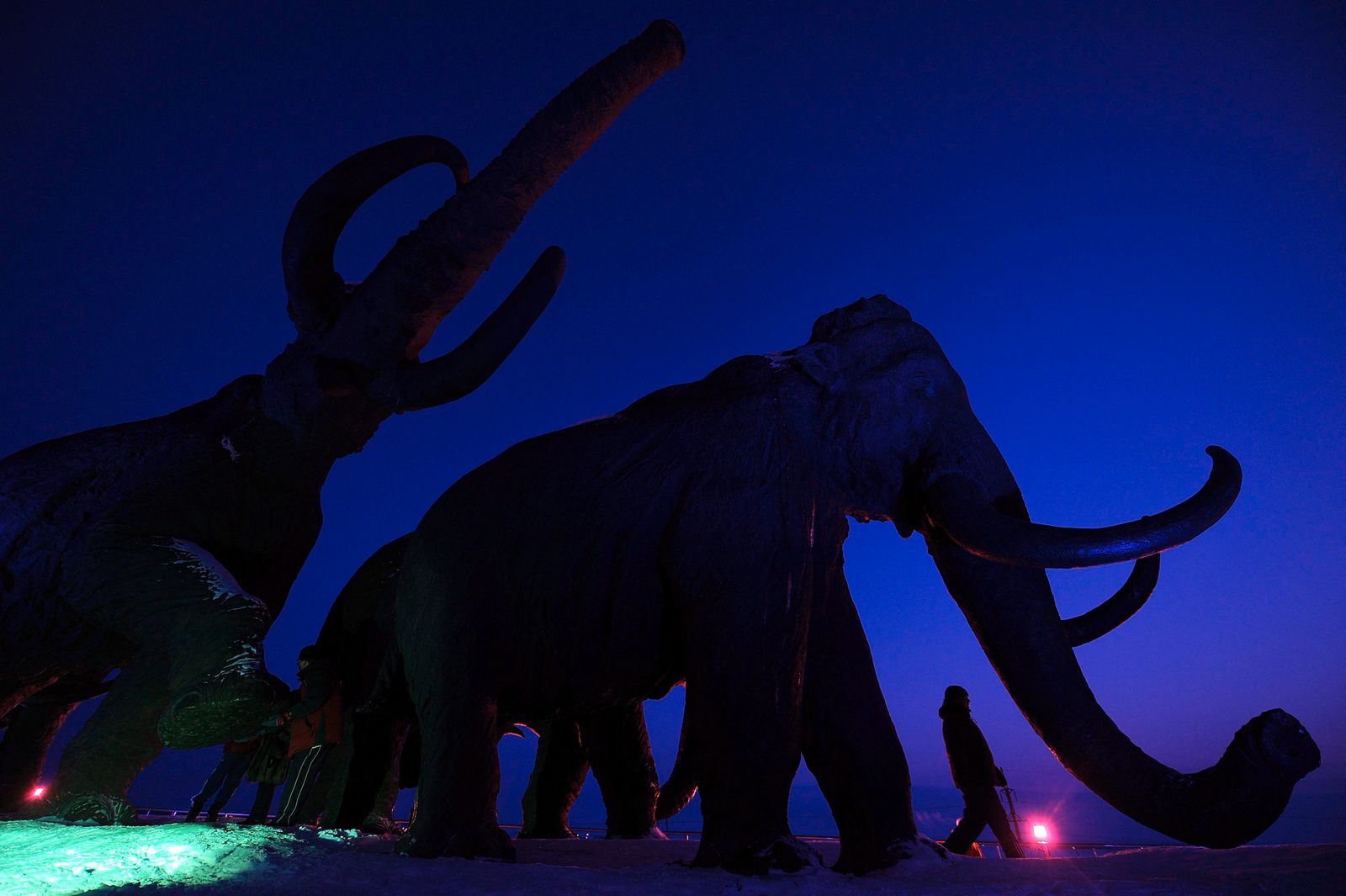 A bronze sculpture of a mammoth in Khanty-Mansiysk in Siberia 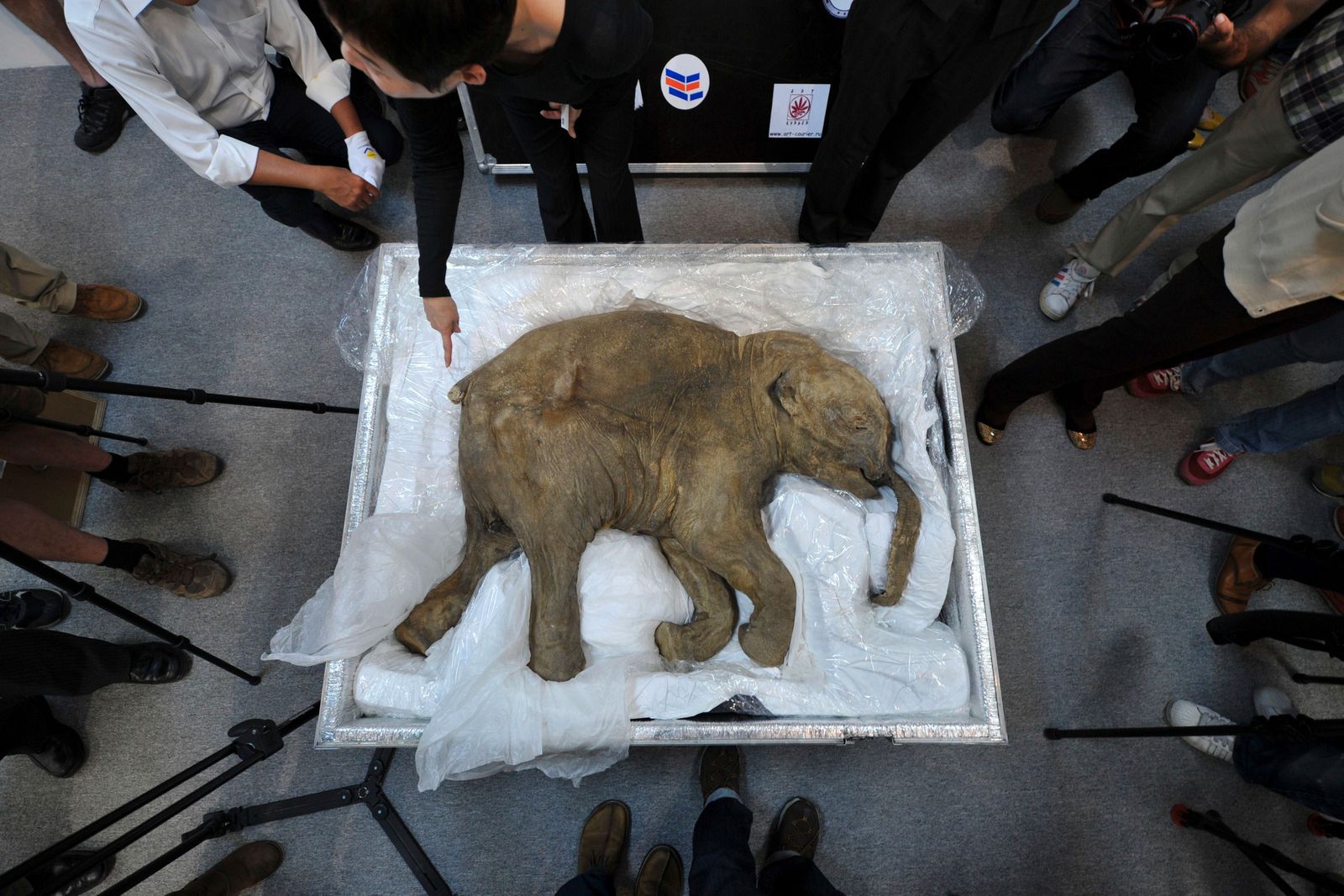 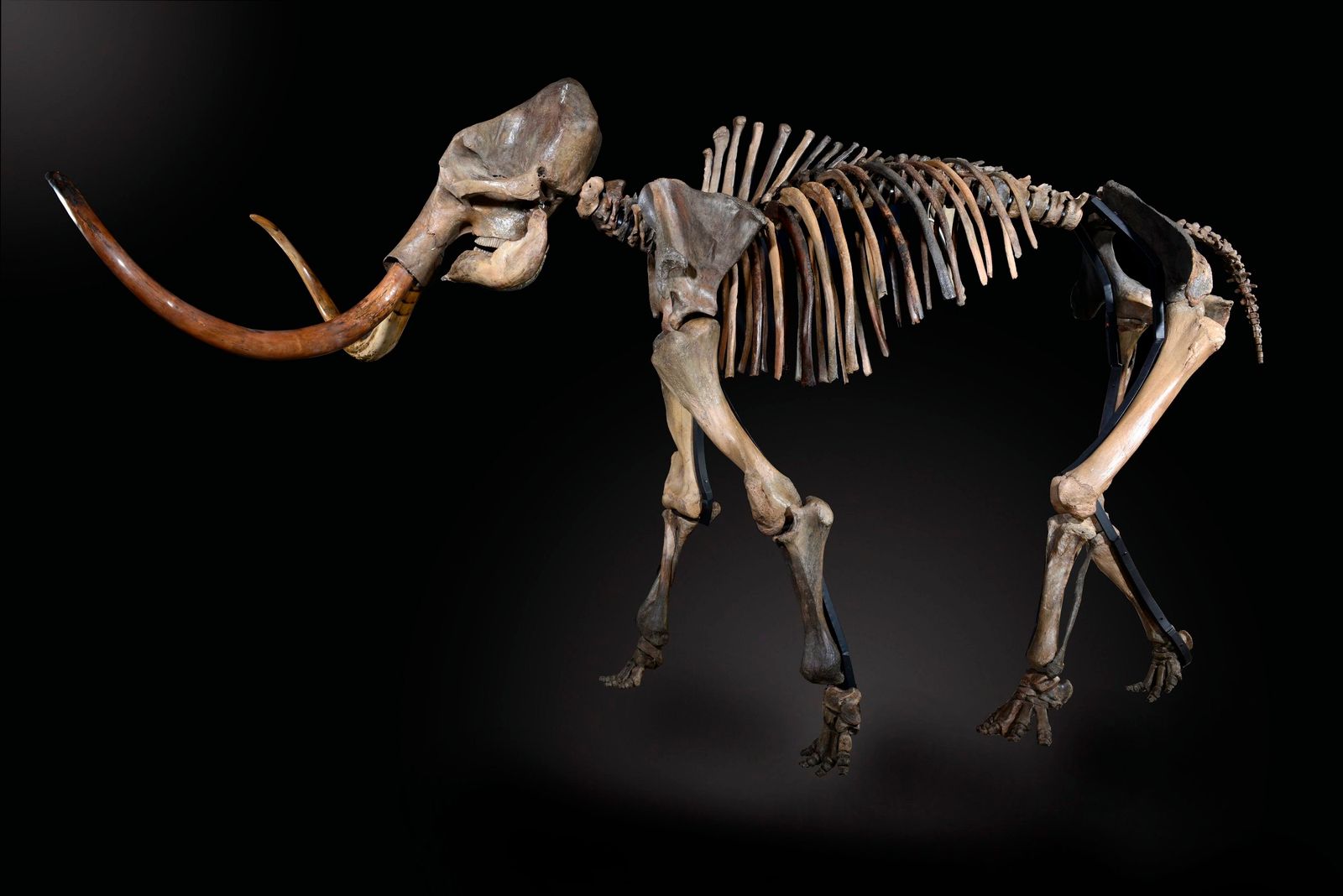 The skeleton of a mammoth