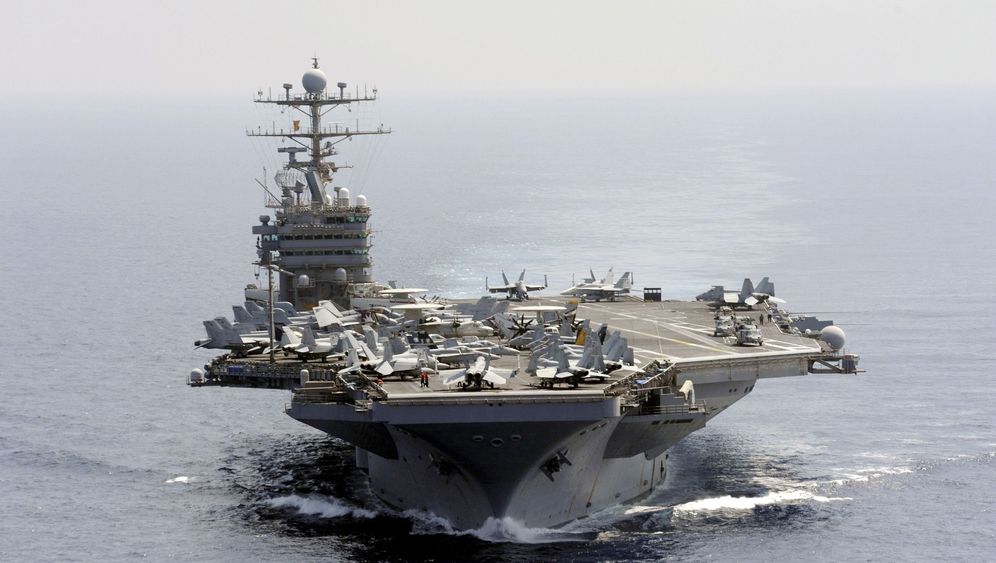 Photo Gallery: Show of Force in the Gulf

Everything on display last week in the Strait of Hormuz was pure theater. There were tough words, risky posturing, well-acted one-person pieces and even a taste the risqué, but not much in terms of a plot.

Or at least that's how it was on the stage of the fifth Fujairah International Monodrama Festival (FIMF).

"The world passes through here," the festival's director said during the opening ceremony on Jan. 22. With that, he was hardly referring to the flotilla of warships approaching the small emirate of Fujairah at that very moment, made up of the American aircraft carrier USS Abraham Lincoln, a guided missile cruiser, two destroyers, the British frigate HMS Argyll and the French frigate La Motte-Picquet. All of them were sailing west through the Strait of Hormuz toward the Persian Gulf. The US military already refers to this zone as a "theater," a possible scene of combat.

The Persian Gulf hasn't seen this kind of display of naval power since the final campaign against Saddam Hussein. Indeed, its size has prompted many to wonder whether it is merely posturing and bluffing or, rather, a sign of an upcoming fourth war in the Gulf.

Two other American aircraft carriers, the USS Carl Vinson and the USS John C. Stennis, are cruising in the Gulf of Oman and the Arabian Sea. In late December, Iran held one of its most elaborate naval exercises in its recent history, and ones that also involved cruise missiles and minelayers. Iranian Rear Adm. Mahmoud Mousavi, a spokesman for the drill, said it was meant to "to prepare the navy for confronting the enemy in war situations."

With Iran's coastline bristling with missiles, the Revolutionary Guards' flotilla of armed speedboats and their submarine bunkers, so much military might is concentrating in the area that any incident could spark a new Gulf war.

Indeed, Patrick Seale, a British expert on the Middle East, warns that a war could also "break out by accident."Sanctions against Iran's central bank and its oil exports, he writes, could "create a climate of hysterical nationalism that could trigger a clash." Such a war, warns Rami G. Khouri, a scholar at the American University of Beirut, would not be "your usual Middle Eastern little flare-up or local war that the region has experienced and survived for so many decades."

The Aorta of the Oil Trade

In geological terms, the Strait of Hormuz lies near to where two continental plates collide. Here, the Arabian plate slides under the Eurasian one. Tectonic shifts pushed up the mountains near Fujairah and brought the region its oil. Twenty percent of the world's crude oil comes from the Gulf region. Of that, over 80 percent, or almost 17 million metric tons per day, makes its way on ships through the Strait of Hormuz.

The economies of Japan and South Korea depend on oil from the Gulf which covers as much as three quarters of their oil needs. For China's economy, it's over half. Were the strait to be blocked, only a certain portion of this oil could be pumped through Saudi Arabia's East-West Pipeline to the Red Sea. A pipeline being built by the United Arab Emirates (UAE) to carry crude oil from Abu Dhabi to Fujairah won't be ready to enter into service until the summer, at the earliest. The container port of Dubai, a major hub in east-west seaborne trade, is just as dependent upon the strait as the seaports of Abu Dhabi, Kuwait, Bahrain and Qatar.

The Strait of Hormuz is not merely an artery of the oil trade. It's the aorta. Since time immemorial, traders and smugglers have flourished here, crossing to and fro between the Arab side and the big ports on the Persian shore. Already in the 13th century, Marco Polo described the strait as a hub of long-distance trade. When discussing the strait in his "Travels," Polo wrote that many ships there "are lost, for in that Sea of India the storms are often terrible."

These days, Iranian speedboats come into Khasab every morning, a small port town near the tip of the rocky Musandam Peninsula, the Omani exclave sticking out like a thumb into the Strait of Hormuz. There, they load up on flat-screen TVs, suspicious packages and machine parts before disappearing back across the Strait up to five times a day. Indeed, Khasab is the duty-free market for southern Iran. As sanctions on Iran have gotten tighter, business there has only gotten better.

According to the so-called "Carter Doctrine" proclaimed in 1980 by then-US President Jimmy Carter, an "attempt by any outside force to gain control of the Persian Gulf region will be regarded as an assault on the vital interests of the United States of America, and such an assault will be repelled by any means necessary, including military force." Over three decades later, this doctrine continues to be the basis of the United States' strategy in the Gulf. In a letter sent to Iranian leaders in early January, US President Barack Obama warned that blockading the Strait would be tantamount to crossing a "red line" and would provoke a massive response. Iran has made repeated threats to do just that should international sanctions be imposed on its oil exports -- which has been the case since last Monday.

Since Iran reformed its armed forces in 2007, the dedicated naval forces of the Revolutionary Guards (informally known as the "pasdaran") have been responsible for the Persian Gulf. Indeed, the mullahs have effectively sidelined Iran's traditional navy, whose ships date back to the pre-1979 era of the shah. Rear Adm. Ali Fadavi, the Revolutionary Guards' senior naval officer, recently stated that Iranian troops could have launched successful attacks against US ships during the so-called "tanker war" of 1984, when the Persian Gulf was a theater in the larger war between Iraq and Iran. In 1988, an Iranian mine almost caused the USS Samuel B. Roberts, an American guided missile frigate, to capsize.

Iran's Revolutionary Guards have about 2,000 naval mines in its arsenal, though it would only take 300 of them to disrupt tanker traffic through the strait. At its narrowest point, the strait is only 54 kilometers (34 miles) wide. US experts assume that, in the case of war, Iran would utilize a "hybrid strategy" of guerilla hit-and-run tactics and ultra-modern weapons.

Although Iran's rugged coastline already offers natural defensive advantages, it is reportedly being fortified with bunkers, tunnels and rocket systems. The Guards are equipped with speedboats patterned off racing boats made by the Italian firm Fabio Buzzi Design, which can reach speeds of up to 70 knots (130 kilometers/80 miles) per hour.

Iran also boasts the only submarine fleet among states bordering the Gulf, including Iranian-built miniature submarines ideally suited for the Strait of Hormuz's relatively shallow waters. Incidentally, the two British and French frigates currently cruising in the region are equipped with state-of-the-art anti-submarine systems. For example, what the British describe as the "revolutionary design" of the HMS Argyll supposedly makes the ship appear no larger than a fishing boat on a radar screen. But there won't be much time for fishing.

In 1971, when the shah still ruled Iran, the country occupied three islands in the area near the strait, including Abu Musa, which lies just 40 nautical miles from Dubai. The island is of immense strategic importance since forces operating from it can control west-bound traffic into the strait.

What's more, all of the booming cities in the region, from Doha to Dubai, lie within range of Iranian short- and mid-range missiles. Indeed, this fact has unsettled local rulers even more than the financial crisis. Should a conflict erupt, the UAE expects that Iran will launch retaliatory attacks against its loading ports, refineries and desalination plants. Likewise, populated areas in the Gulf states are ideal targets for these kinds of attacks. Shiite Iran has consistently stressed its claim to the Gulf against the Sunni ruling houses on its other side -- and especially the House of Saud -- who collaborate with the United States.

At the moment, the United States has about 40,000 soldiers in the Gulf region, on ships and on military bases in Kuwait, Abu Dhabi, Qatar and Bahrain. Indeed, one of the US Navy's most important bases happens to be located in Bahrain, a majority Shiite Gulf archipelago that Iran already claims as its own. Ever since the protest movement was violently quashed there last year, the Navy has been considering moving its Fifth Fleet from Manama, Bahrain's capital, to Qatar.

The embargo imposed by the EU last week will affect a fifth of Iran's oil exports. "Should separate US sanctions succeed (in coercing) Japan and South Korea to stop their imports from Iran, Tehran will literally be paralyzed," analyst Joseph Kechichian wrote in an op-ed piece published last Thursday in the Dubai-based English daily Gulf News. In that case, he adds, India and China would be "in a position to demand sharp discounts" for oil, thereby obligating Iran "to dump its remaining oil production at discount prices."

That would hit Iran hard. In retaliation, Iran's parliament announced last week its intensions to immediately halt all oil deliveries to EU member states. Although other oil-supplying countries have already announced they will help should the threat materialize, the boycott would particularly have negative effects on Italy and Greece. "Europe will burn in the fire of Iran's oil wells," said Nasser Soudani , a member of the parliament's energy committee on Wednesday.

Of course, the threat might be nothing more than theatrical posturing, bluffing and swaggering in the run-up to eventual negotiations. Indeed, both sides are aware of the dangers of a new war in the Gulf. But if there is a ticking time bomb, it has undoubtedly been set to explode on the day the European oil embargo goes into effect. That is July 1, 2012.