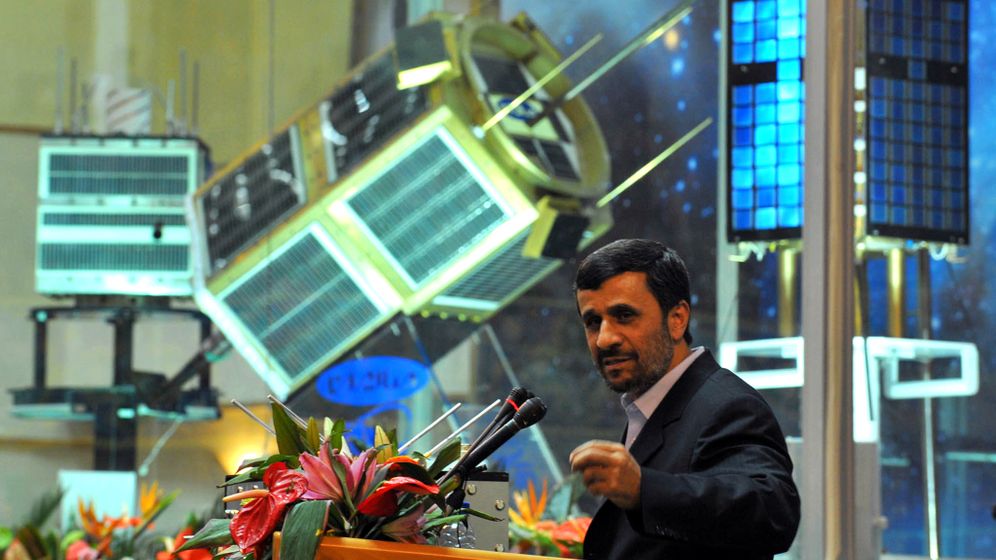 Hot Bird 8 may be Europe's largest and most powerful television satellite, but it still has little chance when the Iranian regime decides to block its signals. When that happens, the Farsi services of the BBC and Voice of America instantly disappear from television screens -- and not just in Iran, but also throughout the satellite's entire coverage area.

Tehran has targeted the satellite in an effort to prevent critical foreign media coverage from reaching domestic viewers. Even though the United Nations has condemned it as an act of sabotage, the international community can do little to stop it.

The Arabic service of the German public broadcaster Deutsche Welle was also affected by the attacks on Hot Bird 8. "We experienced disruptions in December and February," Deutsche Welle spokesman Johannes Hoffmann told SPIEGEL ONLINE. "A total of over 30 hours of programming was affected."

Hoffmann believes the attacks were a "targeted act to block news coverage" on Iran. For example, he noted , there were problems in February during celebrations marking the anniversary of the Iranian revolution.

France-based satellite provider Eutelsat, which operates Hot Bird 8, also believes the jamming attempts are deliberate. "This is not happening by accident," says Eutelsat spokeswoman Vanessa O'Connor. The latest attempt to block the satellite occurred on March 20, according to the BBC and Voice of America.

Indeed, it would seem that it is often surprisingly easy for the regime in Tehran to suppress information from abroad. Although Hot Bird 8 is in geostationary orbit about 36,000 kilometers (22,400 miles) above the Earth, it can be easy to sabotage, something which is also true for many other satellites. The Iranians only need to transmit a strong signal in the satellite's direction using the same frequency with which programs are transmitted from the original ground transmission station.

In the case of Deutsche Welle, the so-called uplink is sent from a ground station in Usingen, in the German state of Hesse. "The satellite cannot, however, determine whether the signal is coming from Usingen or from Tehran," says Deutsche Welle chief engineer Horst Scholz. If in doubt, he explains, the satellite chooses the stronger signal, which allows it to be deceived by the interference coming from Iran.

That is apparently exactly what happened to Hot Bird 8. Eutelsat's employees were easily able to detect the jamming signals -- with their constant amplitude, constant frequency and high power -- on their monitors, but they could not do anything about them. Using a special software package called SatID, they were also able to identify the source of the signals: Tehran.

The satellite operator then informed the French telecommunication regulator Agence Nationale des Fréquences (ANFR) about the signals. The ANFR sent a four-page fax, which has been obtained by SPIEGEL ONLINE, to the Iranians regarding the issue. A copy of the complaint was also sent to the Radio Regulations Board of the UN's International Telecommunication Union (ITU).

The 12-member board meets regularly in Geneva. Its meetings typically focus on highly technical issues, with the experts discussing problems related to frequency interference. In fact, given the paucity of free frequences these days, incidents of interference are not uncommon. Still, targeted disruptions are rare, though there had already been complaints about Iran in the summer of 2009.

This time around, the UN experts were unusually outspoken, at least by their standards. In a statement issued last Friday, the board "urged" Tehran to "continue its effort in locating the source of interference (of the Eutelsat satellite) and to eliminate it as a matter of the highest priority." The Iranians had previously protested their innocence, saying they knew nothing about any jamming attempts, and they assured the board that they would look into the matter as quickly as possible.

The issue is also likely to play a role at the next meetings of the International Telecommunication Union. But, in practice, the UN can do little against the jammers. "In such cases, the ITU Radio Regulations Board appeals to the goodwill and mutual assistance of its member states to find a solution and prevent the occurrence of harmful interference of radio signals," ITU spokesman Sanjay Acharya told SPIEGEL ONLINE. But it is doubtful whether Tehran is interested in cooperating.

Likewise, since the European Union lacks the political will to block Iranian TV broadcasts as a countermeasure, there is no speedy solution to the problem in sight. "These things take time," says Eutelsat's Vanessa O'Connor. "We have the patience to accept that."

In the meantime, the satellite operator has changed how some of its services are distributed. The channels affected thusfar are now transmitted via other satellites that can broadcast to the entire Gulf region, but without being reachable by uplinks from Iran.

Not all the channels on Hot Bird 8 have been affected by the electronic sabotage, however. The state broadcaster Islamic Republic of Iran Broadcasting also transmits its Press TV foreign service from Hot Bird 8. So far, it has not experienced any problems.