From the air, the construction site looks like a sandbox for giants. The meticulously leveled area, which is located in the middle of lush pine forests near the southern French town of Saint-Paul-les-Durance, is waiting for the ground-breaking ceremony in July. Here, on yellowish-red Provencal soil, the international nuclear fusion reactor ITER is supposed to be built in what will be one of the largest research projects in the world.

In recent months, construction workers are said to have moved soil with the total volume of the Great Pyramid at Giza. And that is just the beginning. The first buildings will soon be erected here, forming the site's own small town. The largest building will house the reactor, where as of 2026 the hydrogen isotopes deuterium and tritium will be fused in a controlled reaction to form helium, delivering energy on the scale of a power plant. It's the same process that operates within the sun, and temperatures in the interior of the reactor could reach 100 million degrees Celsius (180 million degrees Fahrenheit).

Proponents of the project argue that what is at stake is nothing less than the energy of the future -- a process of energy production that uses a fuel that is available in almost infinite quantities, and that produces nearly no waste. For the first time, a fusion reactor would produce more energy than is necessary for its operation.

Opponents, however, see the multi-billion euro project as a modern white elephant. Now it has been revealed that ITER's construction costs are exploding. In a worst case scenario, the whole project could be at risk.

Originally, the futuristic reactor was supposed to cost around €5 billion ($6.15 billion). That was the figure given in 2006 when the participating partners -- the European Union member states, China, India, Japan, Russia, South Korea and the United States -- agreed to fund the project. The Europeans were supposed to shoulder 40 percent of the costs, with the remaining partners taking on 9 percent each. But a recent estimate by the European Commission has revealed that the total costs have already tripled to €15 billion, as a result of higher raw material prices and new safety requirements, among other expenses.

The Europeans alone would have to provide €7.2 billion, and further increases in costs cannot be ruled out. But where is the money supposed to come from? Officials in Brussels have drawn up two scenarios: Either member states must inject fresh cash directly, or the EU's research budget will have to be increased by the required amount. Ideally, the eurocrats would like to have a kind of blank check, whereby member states would already guarantee to cover additional future costs.

Each of the scenarios would mean a sharp increase in Germany's contribution, which could reach as much as €1 billion, instead of the originally agreed €540 million. Now Germany's research minister, Annette Schavan, has spoken out against the burgeoning costs. "It's normal for research projects to have increases in costs, but a rise of 300 percent is unusual and not acceptable," Schavan said Wednesday at a meeting of EU research ministers in Brussels.

"ITER is a very important project for Europe," Schavan stressed, adding that the project could not be put at risk for that reason. She called for greater transparency: "We need different management, and we need a clear outlook."

Schavan also rejected the idea of a "blank check" for the project. "We can't pass a resolution which simply says we want (the project) and we will see later how it can be financed," she said Wednesday. In light of the "unusually difficult situation in all national budgets," member states must be able to stem the costs, she added.

According to sources in the Research Ministry, the German government wants to keep as many options for energy production open as possible -- and it still favors fusion research. But Schavan warned ahead of Wednesday's meeting that the government would not support fusion research "at any price." Berlin now wants a new approach to financing the reactor, which would be drawn up by the European Commission. Schavan has indicated that the reactor design might have to be revised. That could mean, for example, that the project will end up being significantly smaller than currently planned.

Such a change "is not currently foreseen," ITER's deputy director Norbert Holtkamp told SPIEGEL ONLINE. "In principle, however, it is absolutely possible -- but only if all the partners agree to it." Getting that agreement could be complicated, as could negotiations over more money for the project. The project's supervisory body, known as the ITER Council, will next meet in mid-June near Shanghai. By then, the Europeans need to be clear about how they want the project to proceed.

Nuclear scientists insist on the importance of the project. "Fusion is an option that we must pursue urgently," argued Günther Hasinger, head of the Max Planck Institute for Plasma Physics, in an interview with SPIEGEL ONLINE. "We still have no silver bullet which we can use to meet the electricity needs of the world at the end of the 21st century, which will be about six times larger than today."

Putting the Puzzle Together

France and Germany have both made suggestions aimed at sinking the costs by some €600 million, EU diplomats in Brussels say. But that likely isn't enough. The problem is that the way the project is designed virtually assures inefficiencies. Seven partners are working together on ITER; all of them have access to the blueprints and the requisite documents. The only exceptions are drawings relating to the equipment responsible for producing the tritium fuel in the reactor.

In contrast to other, similarly ambitious international projects, like the Large Hadron Collider particle accelerator in Geneva, the partners are not simply funneling money into a collective fund. Instead, each country is manufacturing part of the necessary components. The parts will then be put together in France in the hopes that, when the puzzle is complete, it will work. It seems inevitable that, given such structures, some of the work will be needlessly replicated.

Additional extra costs must also be taken into account. For example, the Japanese are receiving a small fusion research reactor and a supercomputer as compensation for the fact that ITER is not being built in their county but in faraway Europe.

The Price of Collaboration

"This is the price you have to pay if you want to develop technology in an international collaboration," said Holtkamp. "It is certainly possible to build a system more efficiently if you want." At the end of the day, he said, it would have been cheaper if one country had developed the reactor by itself. "But then it would have had to pay for everything." Keeping costs down was not, however, the main priority when the ITER project was set up, Holtkamp said: "This is about creating a knowledge base from which all partners will benefit equally."

The participating countries did, however, take the built-in problem of inefficiency into account -- in order to be able to develop as much of the valuable fusion technology at home as possible. This could become a problem, now that financial concerns are calling the whole project into question. One thing is clear, however, Holtkamp argued: "Delaying a project never saves money. It always becomes more and more expensive." 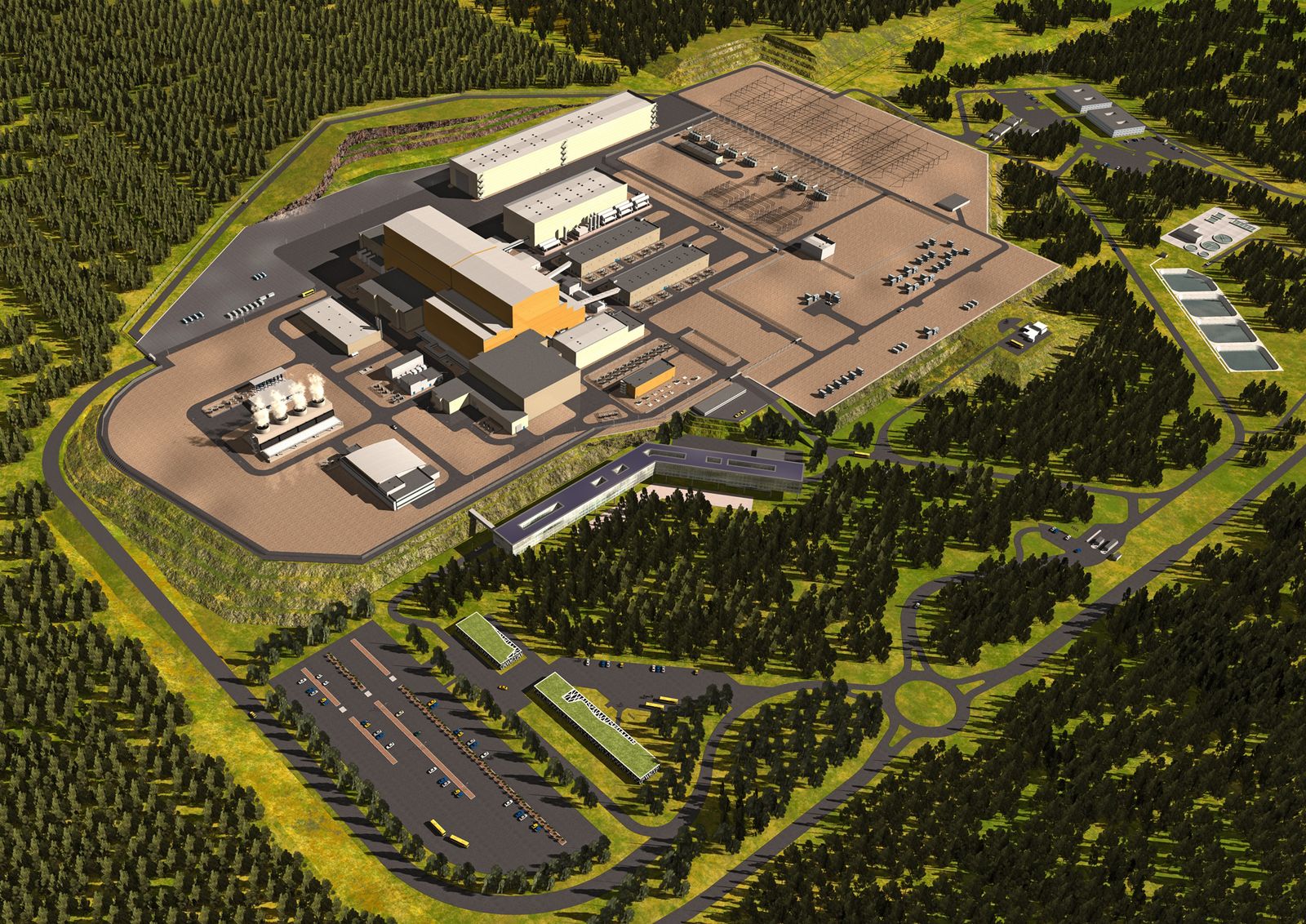 This computer image shows what the ITER facility in Cadarache, France, will look like when completed.