They outraged and they confused when they emerged on the world stage as torch bearers carried the Olympic flame through Paris and London. So just who were the Chinese men in blue and white tracksuits, white baseball caps, black fanny packs and, in some cases, sunglasses?

They appeared to serve as bodyguards of the Olympic flame, extinguishing and relighting it as they saw fit. And if anyone got in the way or too close to the flame -- pro-Tibet protestors, for example -- they could also get rough. And when this happened, they would quickly take the Olympic flame away from the torch bearers and transfer it to a bus in order to protect it from protesters. Protecting the flame or not, though, their harsh manner provoked protests in London and Paris.

"There's no way people like that should be allowed on our streets," Damian Hockney of London's Metropolitan Police told the conservative London paper the Daily Mirror. "If the parade cannot happen without UK police handling security alone it shouldn't happen at all. Who checked these people out?" His colleague Jenny Jones added: "I am curious what their status was and how far they would have gone. They looked mean. It was disturbing."

When asked to describe the torch guards by the BBC, TV presenter Konnie Huq, who also served as a torch bearer in London, said: "The men in blue perplexed everyone. Nobody seemed to know who they were. They were very robotic, full-on, and I noticed them having skirmishes with our own police and the Olympic authorities."

According to Huq's account, the Chinese torch guards called the shots: "They were barking orders like 'Run! Stop!', and I was like, 'Who are these people?' They kept pushing my hand higher when I was holding the torch."

The double Olympic gold medalist Sebastian Coe, who is head of the organizing committee for the 2012 Games in London, was reportedly overheard by British media describing the men as "thugs."

But there was apparently a clear division of duties in London, and officials appeared to have been briefed on the torch guards' role. A Scotland Yard spokesman quoted by the Mirror said: "Our responsibility was the safe passage of the torch bearer. Theirs was to maintain the flame. They were not employed by the Metropolitan Police."

According to the Daily Mirror, the torch guards belong to elite special forces units of the Chinese military, with some having been recruited from the much-feared Flying Dragons and Sword of Southern China counter-terrorism units. The newspaper quoted a "European military source" on the units' training practices: "A lot of recruits die within weeks. It is bloody and brutal."

Chinese state media, meanwhile, portray the torch guards as less sinister. The agents are described as "employees of the Beijing Organizing Committee," which founded a "flame protection squad" in August 2007. The unit is responsible for guarding the flame 24 hours a day along its 85,000-mile (140,000-kilometer), 130-day journey around the globe, according to Reuters.

According to Chinese media, the agents are members of the paramilitary People's Armed Police, which in China is responsible for fighting unrest and maintaining internal stability. Tens of thousands of the "Wujing," as the People's Armed Police are called in Chinese, recently took part in crackdowns against demonstrators in Tibet and neighboring regions. 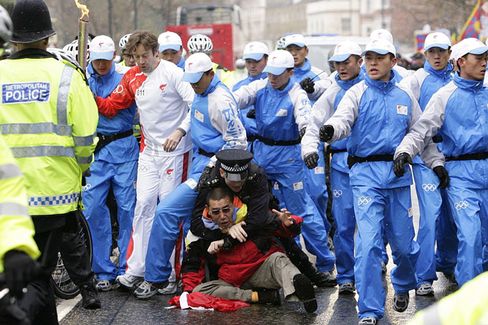 China's flame guards: "There's no way people like that should be allowed on our streets."

"These men, chosen from around the country, are each tall and large and are eminently talented and powerful," the squad's leader Zhao Si was quoted as saying. "Their outstanding physical quality is not in the slightest inferior to that of specialized athletes." Some of the men run up to 50 kilometers a day, one article in state media said, and many are said to speak several languages, including English, French, Spanish, Japanese and German.

The squad is apparently divided into two parts: one 30-member team is accompanying the torch during its international journey, while the other team, which has around 40 guards, will protect the flame as it travels through China on its way to Beijing.

Even four years ago, the security forces protecting the Olympic torch were the source of controversy. When the flame was carried through the Olympic cities of Sydney and Melbourne in the run-up to the Athens Games, the Australian authorities argued with the organizers of the Olympic Games about the fact that Greek officers were providing the security for the torch. Australia prohibits foreigners from working as security officials in the country.

Australia's Prime Minister Kevin Rudd has now announced that the Chinese security officers will not be allowed to accompany the torch in his country. Rudd, who considers Australian officials more than capable of protecting the torch, said there was no reason why China needed to use its own security team when the torch was carried through Canberra on April 24.

The German Olympic Sports Federation, for its part, claims to know nothing about the background of the Chinese torch guards. A spokesman said the International Olympic Committee did not have jurisdiction on security questions during the torch relay. "The event organizers are responsible for organizing the torch relay," the spokesman told SPIEGEL ONLINE. Everything between the ignition of the flame in Olympia, and the lighting of the flame in the Olympic Stadium in Beijing, was the responsibility of the Beijing Organizing Committee, the spokesman said.