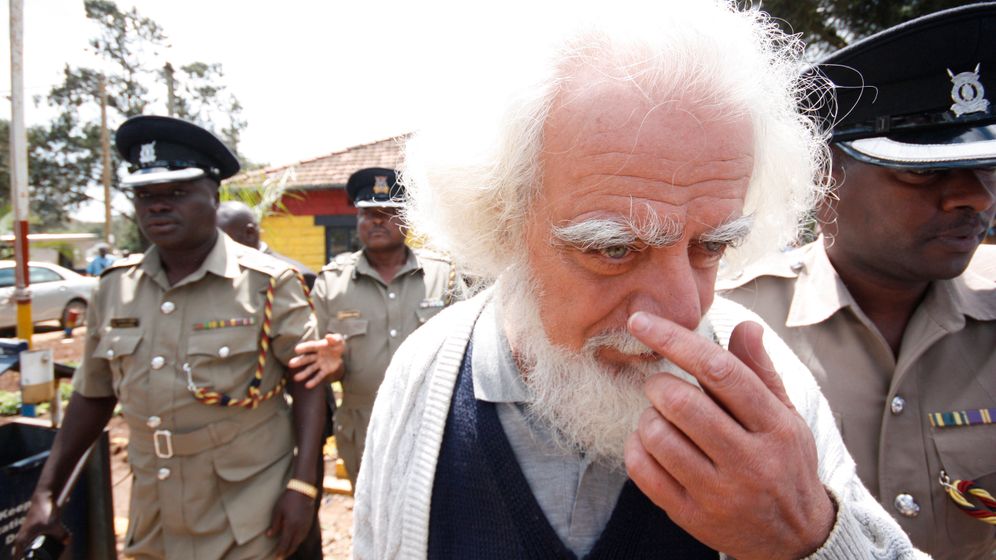 The man in the picture made a pitiful impression. He had white hair, a white beard and bushy eyebrows and was sitting on a spare tire in the rear of a police vehicle, at the mercy of the photographer.

His name is Father Renato Kizito, 67, and he is "Kenya's probably best-known priest," as the mass-circulation newspaper Daily Nation puts it. He had been arrested once again, after his longtime secretary Collins Ochieng, 26, went to the police and accused him of sexual abuse.

The priest had abused him for years, Ochieng claimed. One recent incident happened in early March, when Kizito had asked him to come to his home and offered him a meal, he said. He had become tired, and the priest had started oiling him. Then it happened. The pain lasted for days, he said.

Ochieng was already familiar with the procedure. But he did not want to put up with it any longer. On May 24, he was once again summoned by Kizito. Again he was given something to eat and grew tired. But this time he went to the hospital afterward and then to the police. The medical report concluded that "sexual assault, sodomy" had occurred.

The priest was arrested. The detention lasted only one night, however. He was supposed to appear before a judge in Nairobi the next day. But a senior Kenyan police official came forward and insisted on Kizito's release. A church official had supposedly intervened on Kizito's behalf with the Kenyan president, according to rumors. Although this course of events has not been proven, it is quite conceivable that it could happen in Kenya.

'I Found Him Holding a Towel and Some Vaseline'

Kizito is well known in Nairobi. He is head of the Koinonia Community, a Christian relief project that tries to help street children. The project provides young people -- mainly boys -- with shelter and education. It pays teachers and gives the youth the opportunity to take part in basic vocational training and sometimes even awards them college scholarships. Koinonia has given hundreds of young Kenyans the hope of a better life. Father Kizito has been at the center of the community for the past 15 years. He is a native Italian who came to Kenya from Zambia at the end of the 1980s.

But now, it seems, his alleged acts could bring the priest down. It is not the first time that allegations have been made against him. In the summer of 2009, three young men, who were 16 and 24 years old at the time, swore under oath that they had been sexually abused by him over a long period. One of the men, Benson S., said that the priest had first touched him when he was 15.

During one meeting, the priest had asked him to undress and take a bath. According to Benson S.'s testimony: "When coming from bathroom I found him holding a towel and some Vaseline. … He took the Vaseline and repeated the usual exercises and touched my manhood and buttocks after which he asked me to move close to the bed, all this time with my eyes closed."

The father insists on his innocence. He claims that the young men were probably paid for their statements by individuals who wanted to get him out of the way and get their hands on Koinonia's properties, which are worth millions. The men ultimately withdrew their statements. One of them said later that he had revoked his testimony because he had come under enormous pressure and had been threatened with death.

Since then, new alleged victims have come forward. It is difficult to believe the priest's claims that there is an organized campaign against him.

'But What Will People Say?'

Twenty-five-year-old Hesbon Ouma also claims to be one of the priest's victims. He alleges the priest invited him to dinner several times in 2007. Father Kizito supposedly told him he suffered from high blood pressure and that the doctors had suggested sex to him as part of his therapy. The priest, Ouma claims, told him: "I need your help."

"How can I help you?" Ouma replied

"You know how," Father Kizito said

Kizito: "Not necessarily. You could also help me."

Uoma: "But what will people say?"

Ouma says that nothing happened that night. Several days later, he says, the priest cooked spaghetti and meat, but didn't eat any of it himself. "I suddenly became weak," Ouma told SPIEGEL ONLINE. "When I woke up, I was very oily. I took a shower, and the next morning the priest apologized to me." He claims it happened frequently, but that didn't stop Ouma from continuing to visit the priest. When asked how often, he says, it took place "for two years, often. I didn't keep track of the number of times."

In Kenya, as in most parts of Africa, people of the church have an almost unshakeable authority, especially those who have white skin. Older men, in particular, enjoy a great deal of respect. Besides, it is taboo to confess to homosexual activity. More than anything else, though, it was the material dependence that led many boys and men to remain silent. Many of the victims have testified that the priest gave them small, and in some cases large, sums of money.

The sexual favors were returned in the form of jobs, cash or loans. Those who didn't play along were fired, threatened or had their money taken away from them. In a country with millions of unemployed people, those are serious means with which to apply pressure.

But not everyone went along with it. James Mutiso (name changed by the editors), served as a kind of bookkeeper for years. Father Kizito also offered him the prospect of a scholarship to study at a private university in Kenya. That was the case, at least, until Father Kizito asked him into his bedroom in August 2008, as Mutiso claims. "I'm only human," he alleges the priest said. "Besides, the doctors told me that I needed to do something for my high blood pressure." When told he should lie down in bed next to the priest, he refused. The same day he was forced to hand over his keys and the car he used. The promise of a scholarship was gone.

Another long-time employee of the Koinonia Foundation, a man many young men had trusted, confirmed the priest's suspected sexual activities when contacted by SPIEGEL ONLINE. "They all told the same story," he says. At least one of the witnesses was threatened at gun point, he said. Afterwards, the witness apparently retracted his testimony swiftly.

After the uproar caused by the incidents in 2009 in Kenya, churches, police and prosecutors all announced further investigations. As is often the case in the country, they never produced any results -- despite the fact that there was no lack of incriminating evidence. Videos circulating in Nairobi, for example, show the priest apparently committing abuse. At times, he is fully naked, at other times wearing only socks.

The footage is as depressing as the setting: a small shabby bedroom with used bed linen and a wool blanket. The videos must have been created with the priest's knowledge, as the camera lens is aimed at the bed. One of the abused boys allegedly removed several videos from the priest's home, and copied and circulated them.

Father Kizito does not want to comment on any of the allegations. Instead, he sent the head of his administration, Esther Kabugi, to talk to SPIEGEL ONLINE. "Such allegations are the easiest way to damage a priest's reputation, especially if it is a white priest," she said. She insisted there was no evidence for any kind of abuse or misconduct, and that there had also not been any evidence in 2009. The accusations were an attempt by former trustees of the project to acquire the organization's property, she claimed. Kabugi asserted that the videos were fake, saying that any video could be edited with the appropriate technology. "The software to do that is available."

In the meantime, Collins Ochieng and Hesbon Ouma have gone into hiding. They had received numerous anonymous threats after filing charges.

Blowing the Whistle on Abuse

Father Kizito is by far not the only priest who has attracted attention in Kenya. On the contrary, it almost seems as if the Vatican no longer has the Church in the country under its control. Recently, angry residents of the western Kenyan village of Rachuonyo wanted to lynch a 45-year-old priest who was alleged to have abused a six-year-old girl in a potato field.

In August 2009, the Dutch Bishop Cornelius Schilder left his mission near Nairobi in a hurry. He had apparently given the Vatican "serious reasons" for his departure. His mission spoke of "health reasons." A 32-year-old claimed that Schilder had raped him over a period of about 20 years. The Church set up an internal commission to investigate the case. The police were not informed. In the end, the Vatican relieved the bishop of all his clerical duties. The affair was finally made public by Dutch newspapers. The head of the Dutch chapter of the Mill Hill Missionaries, to which Schilder belonged, confirmed that the Church had disciplined the bishop. Schilder himself did not comment on the allegations.

After numerous abuse cases in Europe and North America became public in recent years, the issue appears to have now reached Africa. In February, a priest in South Africa blew the whistle on abuse in the Anglican Church of South Africa. He claimed that sexual abuse of minors had been going on in Cape Town for decades. The head of the Southern African Catholic Bishops Conference publicly admitted that there had been around 40 cases of abuse of minors within the Church since 1996 alone.

In 2010, the archbishop of Benin resigned amid accusations of sexual abuse. The priest denied the allegations, saying that the sexual contact had been consensual and that the woman had been 21 years old and therefore above the age of consent.

Meanwhile, in Burkina Faso, a former priest called Felix Koffi Ametepe spoke out about abuse. "When I was in the church, I happened to discover some suspected cases of abuse, especially by foreign clergy," he told News24, a South African website.

But the news of these cases has not led to internal discussions in the Church or more sensitivity. Last year, a Jesuit priest who allegedly abused eight boys and young men in Brazil was quietly transferred to Mozambique.

Even in the case of Father Kizito, the Vatican has taken little action. The priest continues to operate his street-children projects. It is not known if he is engaging in abuse. But one thing is clear: Just as in the past, it seems that the Church does not want to know.