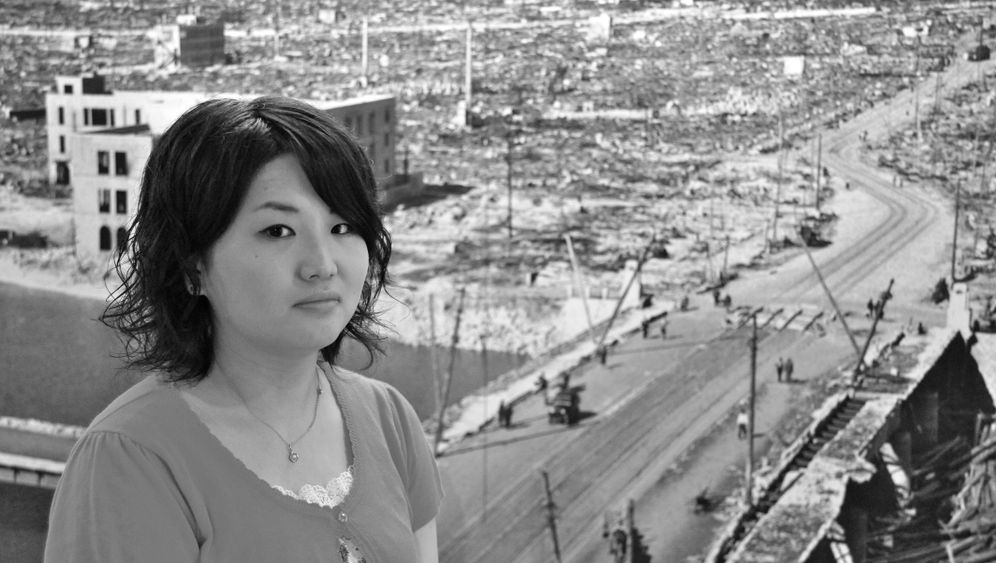 The nuclear bomb and small origami cranes -- for Kyoko Niiyama, the two images are inseparable. "Each of the paper birds tells the sad story of my city, but they also represent its hopes and strengths," the 20-year-old says.

When she was at school, she also tried to fold her own cranes, she says. Just as Sadako Sasaki once did. Every child in Hiroshima knows Sasaki's story -- and entire classrooms make pilgrimages each year to the section of the Hiroshima Peace Memorial dedicated to her, where they hang their own origami cranes on strings.

Sadoko Sasaki was two years old when the first atomic bomb exploded in her hometown. She died at the age of 12 of leukemia, a disease many children fell victim to due to radiation from the bomb. During her final days in the hospital, a friend told Sasaki that anyone who folded 1,000 origami cranes could make a wish to God.

For origami paper, she used packing materials, newspapers and magazines. Other patients and friends brought her sheets of paper. The 12-year-old valiantly folded her origami, day in, day out. She managed to fold 1,000 cranes within the course of a month. But her wish of recovery was never fulfilled. Sasaki died on Oct. 25, 1955. As her parents encouraged her to eat more on the day of her death, she asked for tea with rice. "It tastes very good," were the girl's final words.

Kyoko Niiyama knows the story well, but sometimes she still struggles to control herself when she tells it. Possibly because it reminds her of her grandmother, who herself is a hibakusha, the Japanese word used to describe those who survived the nuclear bombings in Hiroshima and Nagasaki.

One of the stories her grandmother told her about August 6, 1945, is the one about her great-grandfather, whose body was never found. His body was either burned to the point of non-recognition or was completely incinerated by the explosion. "My grandmother still says today that she was never able to accept the death of her father because his fate was never clarified," the 20-year-old says. "It is a pain that never goes away."

Will Hollywood Ever Make an Objective Movie about Hiroshima?

"Hiroshima is a special city with a message," says Niiyama, who wants to become a journalist. She is currently completing an internship at Hiroshima's Peace Memorial Museum. It's an enormous, modern building, filled inside with exhibits on the unimaginable. One exhibit is a glass display case holding cranes that were folded by Sadoko Sasaki. The museum is also filled with photos, giant models and even tiles that were melted in the heat of the firestorm created by the blast.

The exhibits at the museum are very moving, and that is important to Niiyama. "We cannot forget the past," she says. "Of course we must also remember the crimes that were committed by our own military during World War II." Even 65 years after the end of the war, Japan still has a hard time coming to terms with its own history.

It's a problem, however, that isn't exlusive to Japan. Niiyama learned that during a year abroad, when she studied at a college in the United States. "To me, Hiroshima's message is not an indictment, but rather a warning for peace and against the nuclear bomb," she says. "I would have really liked to have told my fellow students in the US a lot about my hometown and its history," she says. But she says people had little interest in those stories.

Niiyama said her experience was that America's telling of history comes through overblown movies like "Pearl Harbor." She says she found there was a lack of any real discussion about the dropping of nuclear bombs in Hiroshima and Nagasaki. "We will probably have to wait an eternity for an objective Hollywood film about the victims of Hiroshima," Niiyama says, sounding a little bitter.

Hiroshima Is Slowly Forgetting Its Own History

But even Hiroshima itself, the city where the first nuclear bomb was dropped, is slowly starting to forget its past. "All I have to do is look at my 16-year-old brother," she says. "The dropping of the nuclear bomb is only a thing of the distant past for him and other people his age. He doesn't even take the time to listen to our grandmother's stories," she says.

Niiyama then takes us through the expansive memorial park, which has several monuments including the Peace Bell, to the so-called A-Bomb Dome. The memorial is comprised of the ruins of one of the few buildings whose walls remained standing after the dropping of the bomb, even if the people behind those walls were incinerated. Now the building's steel dome points up toward the clouded sky. The scene still has the power to shock.

"Sometimes couples have photographs taken of themselves standing in front of it, smiling," says Kyoko Niijama, something that she finds "bizarre." An expensive restaurant on the river bank is located just a stone's throw from the peace monument.

Modern-day Hiroshima starts behind the A-Bomb Dome peace memorial. With its new high-rises and shining facades, all of which are very clean and somewhat dull, it resembles a typical Japanese city, and is perhaps even a bit more sophisticated and modern than cities in other parts of the country. The city has a large covered shopping area and an entertainment district where groups of drunken salarymen totter uncertainly to taxis in the wee hours. Neon signs light up the downtown area at night, and pachinko machines rattle with a deafening noise in the casinos. Billboards promote the local baseball team, Hiroshima Toyo Carp, which plays in Japan's top league.

As for tourist sights, the bomb did not spare many. A castle in the heart of the city has been rebuilt. There's also an old ginkgo tree, which at first sight does not exactly look like a tourist attraction. It's located in Shukkei-en, a beautiful garden with a pond full of valuable koi carp. The park, which was originally laid out in the 17th century, had to be rebuilt after the bomb turned it into a wasteland. After the explosion, people threw themselves into the Shukkei-en pond to cool their burns and to drink the water. Everything in the garden was burned -- but the ginkgo tree survived. "Isn't that a small miracle?" asks the student.

'Forgetting the City's History Would Be Terrible'

Niiyama brings us to a traditional restaurant with an open kitchen. "Here you can get the okonomiyaki pancakes that are typical of my city," she says, not without pride. Traditions are important to her, especially as the bomb almost completely wiped out the old Hiroshima. "For me, Hiroshima is primarily my hometown where I feel comfortable, even if many people around the world inevitably associate the name Hiroshima with the atomic bomb." That association may be sad, but in a certain way it is also good, the student explains. "Forgetting the city's history would be terrible," she says, as the cook puts layers of fresh ingredients on a pancake. "Then all the deaths would be entirely in vain."

On August 6, Hiroshima takes a stand against forgetting. The city holds a large memorial ceremony with tens of thousands of visitors in the Hiroshima Peace Memorial Park every year on the anniversary of the bombing. "And many schools continue to examine the issue," says Niiyama.

For example, the public Motomachi High School participated in an art project with hibakusha, where contemporary witnesses told students about the bombing. The pictures that the students later painted are disturbingly intense. One student, 17-year-old Miho Tokunaga, created a picture showing people burned in the explosion crossing a bridge. The naked, bleeding figures look like ghosts. It does not look as if a teenager painted the picture.

"It was clear to me that, no matter how hard I tried, I would never do justice to the sad stories of Ms. Watanabe, one of the hibakusha," the student said, looking serious. She traveled to the location that she depicts in the painting to see it first hand. "For the first time I really became aware of what happened back then, because one of the survivors told me about it." Before that, she admits, she hadn't given the subject much thought. "But what will happen when one day there are no more living witnesses? I think many people will forget."

It's a concern that is shared by Hotsuma Abe, a retiree who works as a part-time teacher at Motomachi High School. "I was shocked when I heard that some schools in Hiroshima have cut their peace lessons from the curriculum," the teacher says.

For Dr. Hiroo Dohy, however, forgetting will be impossible. He is head of the division for atomic bomb survivors at Hiroshima Red Cross Hospital. The hospital was already there when the bomb fell on Hiroshima and was severely damaged in the blast. Although many nurses and doctors lost their lives, and the surviving staff did not know what had happened to their relatives, the hospital remained in continuous operation. That's something the staff are still proud of at the hospital today. It was not until 1993 that the old buildings were replaced by a new building.

In the Atomic-Bomb Survivors Hospital Division, victims were still suffering and dying decades after the bombing. Even today, the hospital still has patients who are victims of the radiation they were exposed to then, who suffer from, among other complaints, cancers of the thyroid, lung, breast or genitals. "The closer they were to the epicenter at the time, the higher was the risk that they would later develop an illness," Hiroo Dohy explains. The fear of cancer is something that has accompanied many hibakusha their whole lives.

Part of the old masonry still stands in front of the hospital's entrance. It was kept as a monument, along with the building's twisted steel frame that reminds viewers of the massive blast wave. "This too is part of my city," says Niiyama. "Most of the tourist sights tell a sad story."