The house of Shukarno Abdul Mutalib's family is decorated as if for a child's birthday party. Bunches of colorful balloons hang in the driveway, the aroma of roasted lamb wafts from the grill and plastic cups are filled with candy-colored juice. Nearly the entire family has made the trip here to Kuala Kangsar, a town in the Malaysian countryside. Uncles, brothers, nieces and nephews flew in from Singapore, Indonesia and the Malaysian capital Kuala Lumpur to sit here together on the terrace, looking out at the languidly flowing Perak River.

The family is celebrating the end of Ramadan and the end of their fast, a festival day known in Malay as Hari Raya. But this year, that's not all. Shukarno Abdul Mutalib, 60, head of the family, also has important news to share. It concerns his daughter Kartika, and by extension the entire family's honor. And if some Malaysian commentators can be believed, the whole country's future is at stake as well. 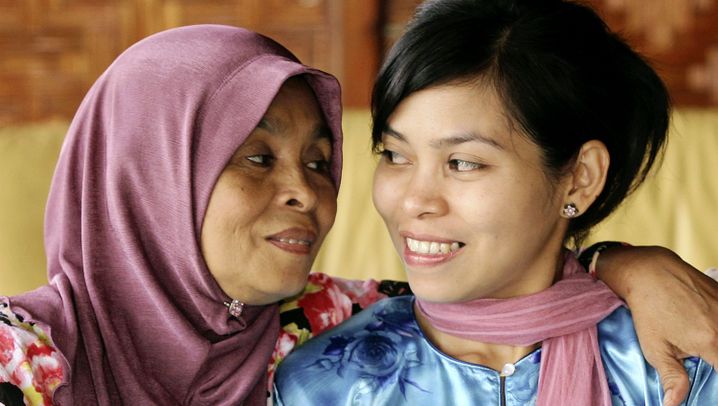 Kartika sits beside her father, smiling shyly. Following Muslim custom, she's wearing a high-necked dress and her hair is hidden beneath a black headscarf. Her husband and two small children are here too.

Kartika Sari Dewi Shukarno, 32, lives in Singapore, where she works in a hospital and also part-time as an advertising model. She's been sentenced to six cane strokes by Malaysia's religious Shariah court. The crime? Drinking beer in a hotel bar

Kartika's case has attracted much public interest in recent months. Malaysia, a country which presents itself as a moderate Islamic state, has never before caned a woman. And in this case, the offense that prompted the sentence seems particularly absurd.

Najib Razak, the country's prime minister since April, is in a bind. His party experienced a drop in support in the last election and now the politician finds himself doing a balancing act, knowing that every vote counts. When it comes to Malaysia's non-Muslim minorities, who are mostly of Chinese and Indian background, Najib takes a more liberal course. At the same time, he doesn't want to lose hold of the country's Islamist segment, a group which is gaining influence and already appoints one in ten members of parliament. The last thing the prime minister needs, however, is for images to go round the world which make Malaysia look like Afghanistan under the Taliban.

Najib has urged Kartika Shukarno to appeal, which could possibly bring about a change in her sentence. The Muslim women's rights organization Sisters in Islam has also called for a review of the scandalous sentence. Malaysia is a divided country. A secular legal system, which forbids caning for women and children, exists in parallel with the world of Shariah, Islamic religious law.

The whole thing began in July 2008. Kartika took a long weekend trip to a beach-side hotel in Malaysia with a few friends, a relaxing break from the stressful daily grind. Her husband, Muhammad Afandi Amir, watched the children while she was gone. Born in Singapore and a member of the country's Muslim Malay minority, he makes his living as a computer technician.

In the afternoon, Kartika checked into the Legend resort hotel in Cherating, whose slogan is "discover heaven on earth." The hotel has an international clientele, so the six guests from Singapore aroused little interest when they met up in the hotel bar in the evening and ordered a small Tiger Beer each.

Beer is available throughout Malaysia. The 7-Eleven convenience store chain, for example, offers nine different varieties, from Singapore's Tiger Beer to Guinness from Ireland and Carlsberg from Denmark. About 26 percent of Malaysians are of Chinese descent, while 8 percent are of Indian descent and 12 percent belong to indigenous populations. The alcohol ban affects only the Muslims, including the 53 percent of the population who are Malays. These last are the group that has steered the country's fortunes since its independence. Shariah law also affects only the Muslims, and is enforced especially strictly in three of Malaysia's 13 states. The Legend hotel is located in one of those three: Pahang.

Taken in for Questioning

The young women in the hotel bar raised their glasses to each other at around 6 p.m. Kartika was the only Muslim in the group -- the rest were Chinese and Indian. None of them seem to take particularly seriously the strict alcohol ban that applied to Kartika. The waiter didn't seem to care either; at least, he didn't ask to see her identity card, which would have shown her religious affiliation.

Half an hour later, religious police came storming into the hotel foyer. Was it a routine check? Or had an informer in the hotel blown the whistle? Kartika was the only one brought in to the station, where she had to give a urine sample. The police questioning lasted until 6 a.m. And at some point during her interrogation, Kartika admitted to occasionally posing for advertising photographs in Singapore. The keepers of the country's religious code were suddenly all ears.

Kartika was set free, but forbidden from leaving the country for the time being. She moved with her children to her father's house in Kuala Kangsar, 200 kilometers (125 miles) north of Kuala Lumpur. She quickly lost her job at the hospital, as well as a scholarship to study; Singapore shows little tolerance for anyone involved in pending legal proceedings. In the media, Kartika was soon being portrayed exclusively as the "beer-drinking model." She pleaded with the Shariah judge to be lenient and impose a mild sentence.

Shock for the Country

It took a year for the verdict to be delivered, and when it did, it came as a shock -- not just for Kartika, but also for the many Malaysians who now had another reason to fear their country was falling into the hands of the Islamists. Kartika was slapped with a fine equivalent to around €1,000 ($1,500) and threatened with three years in prison if she didn't pay. Corporal punishment was added on top of that -- to be carried out with a cane.

Shortly after the verdict came, Kartika was brought to a state prison near Kuala Lumpur. The law dictated that corporal punishment could only be performed on inmates. Prison officials, however, didn't seem particularly eager to enforce the punishment, saying they had no experience caning a woman. Kartika was allowed to return to her family for the time being, granted a reprieve due to the start of Ramadan. Meanwhile, all the parties involved pondered how the matter could best be resolved.

An assistant to the head of the state government in Pahang publicly suggested that Kartika be declared of unsound mind. The certifiably insane can't be prosecuted -- a point that many Shariah scholars also agree on. It would be an elegant solution. No one would have to give in, and everyone would be spared the embarrassing photos.

But the government didn't reckon with Kartika's family.

Challenge to the Government

Her relatives are self-confident, modern Muslims. Kartika's father, who owns palm oil plantations and a safari lodge, regularly took his nine children skiing in Switzerland or shopping in Amsterdam. Most of the family members have attended university, many of them abroad. They're religious, but the idea that Kartika should be humiliated with a caning just for enjoying a little beer would never have crossed their minds.

This makes her father's news on this evening in Kuala Kangsar all the more surprising. He's engaged a team of well-known lawyers, the family patriarch explains, and given them a clear assignment. The attorneys are to make sure Kartika is declared fully fit for punishment and that the Shariah law sentence is executed, in public.

This is his challenge to the government, Shukarno Abdul Mutalib declares, because Malaysia needs to finally admit one important thing -- that it's not, in fact, ruled by the Taliban.