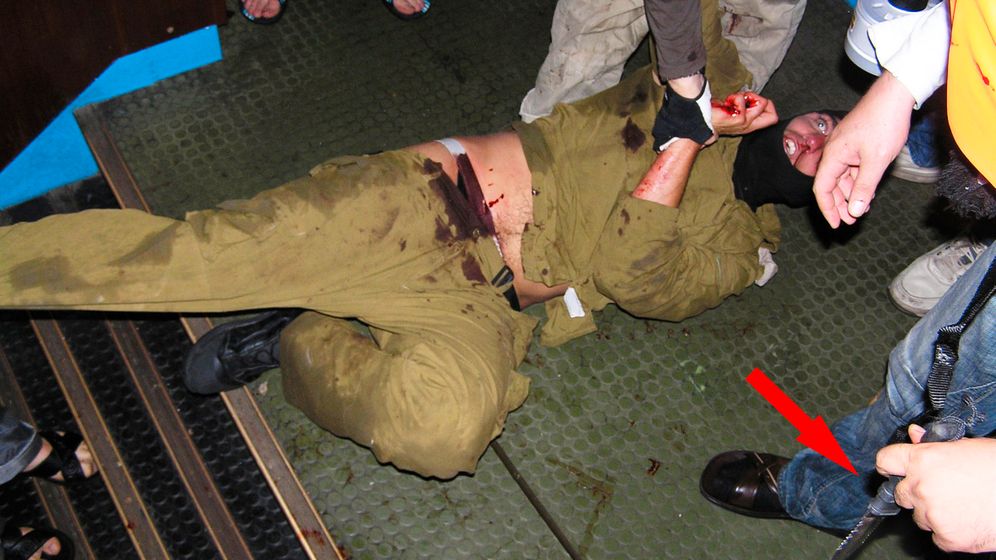 On Friday, June 4, an agitated man with a bald head and full gray beard walked into the headquarters of the Muslim aid organization IHH in Istanbul. The 53-year-old man identified himself as Kevin Neish, a peace activist and amateur photographer from Victoria, Canada. Four days previously he had been on board the Turkish ship Mavi Marmara, he said. He had taken photos that night when Israeli soldiers stormed the vessel. "Do you have a computer?" Neish asked breathlessly and handed a memory card containing digital photos to a surprised office worker.

The photos that appeared on a computer screen at IHH provide a fairly accurate portrayal of what happened on May 31 some 100 kilometers off the Israeli coast. They show two pro-Palestinian activists armed with iron bars standing in front of a door. One of the photos shows an Israeli soldier covered in blood and lying on the floor, the other shows a dead activist who appears to have been shot in the head. The photos show that a deadly scuffle took place on board -- one in which activists were killed by Israeli soldiers, but which was provoked by the Turkish and Arab passengers of the Mavi Marmara.

The IHH staff didn't like every photo they saw. Only Neish, who had managed to smuggle the memory card past the Israeli authorities and into Turkey, felt satisfied. "I hid the card everywhere while the soldiers were questioning us," he said. "I had it in my mouth, once in my shoes, and once in my underpants."

Three days later, on June 7, the photos were published in Turkish newspaper Hürriyet -- together with other photos taken by Turkish photographer Adem Özköse, who works for the Islamic publishing house Hayat Dergisi.

The fact that "the moments when the Israeli soldiers were beaten up," as Hürriyet put it, were published in a Turkish newspaper of all places is the climax of a bizarre war of interpretation that pro-Palestinian activists and the Israeli government have been waging against each other ever since the deadly raid.

Turkish Prime Minister Recep Tayyip Erdogan railed against Israel's "banditry and piracy." But Hürriyet belongs to the media group of entrepreneur Aydin Dogan which has been critical of the government in the past. Initially, Dogan's newspapers had criticized the Israeli raid just like Turkey's pro-government papers. But since then they have been warning against excessive Israel bashing and against the prime minister's increasingly authoritarian style of government.

"I am afraid," wrote Turkish political columnist Nuray Mert, "not just because emotions have supplanted reason in foreign policy but because one is immediately accused of Zionism and silenced whenever one criticizes government policy."

Erugrul Özkök, the former editor-in-chief of Hürriyet, regards the photos as a "journalistic success" that could not be censored. "Israel damaged itself with this mission, but it is also wrong of Erdogan not to classify Hamas as a terrorist organization," he said.

Pro-government newspapers are accusing the Dogan group of playing into Israel's hands by publishing the photos. Fehmi Koru, one of the best-known columnists close to the ruling AKP party, has a simple explanation for the approach being taken by Dogan's paper's: the media mogul is a business partner of Germany's Axel Springer publishing group, says Koru, and Springer pursues a strategy of unquestioning solidarity with the Jewish state. Springer rejects this as absurd.

But not everyone in Israel is happy about the publication of the beaten-up soldiers. The sight of comrades in peril could hurt the morale of the troops, some generals fear -- an argument the army command used to try to prevent publication of video footage on the day of the raid. It took more than 12 hours for black-and-white sequences from the beatings to be made public, but by that time the version of the pro-Gaza activists was already dominating the news.

But for the political leadership in Jerusalem, the photos are final proof that activists on the Mavi Marmara wanted to "lynch" the soldiers. As a result, Jerusalem was all the angrier when the Reuters news agency manipulated the photos before it passed them on to its clients, newspapers and television stations around the world. On one photo showing an Israeli photo lying on the floor, Reuters cropped out the hand of one pro-Palestinian activist holding a knife, and on another photo a pool of blood was missing.

The agency has been accused before of editing photos in Israel's disfavor. During the 2006 Lebanon war, a Reuters photographer added darkened smoke in a picture of Beirut, which made an Israeli air raid look far more dramatic. Reuters said the most recent image crops were a mistake. But Israeli Prime Minister Benjamin Netanyahu said they were further evidence of the "prejudice" of the international community.

That is one reason why the Israeli cabinet this week rejected an international investigation of the incident. It will only allow two "international observers" to join the Israeli commission which will be led by the former judge of the top court, Jacob Turkel. But those two foreign observers are known as being friendly towards Israel: David Trimble, the Protestant Nobel Peace Prize winner from Northern Ireland, and the former Canadian judge Ken Watkin, who converted to Judaism several years ago.

The Turkel commission is only supposed to clarify whether Israel acted in accordance with international law. Only the army itself is permitted to investigate the actual military operation.

There is cause to doubt that the international community will be satisfied with that. It has not ruled out that the UN Security Council will yet vote in favor of instituting a commission. Turkey, which currently is a member of the Council, is insisting on one. Foreign Minister Ahmet Davutoglu said Ankara doesn't trust the Israeli commission. Israel, he said, was in the dock, yet wanted to be prosecutor and judge at the same time.