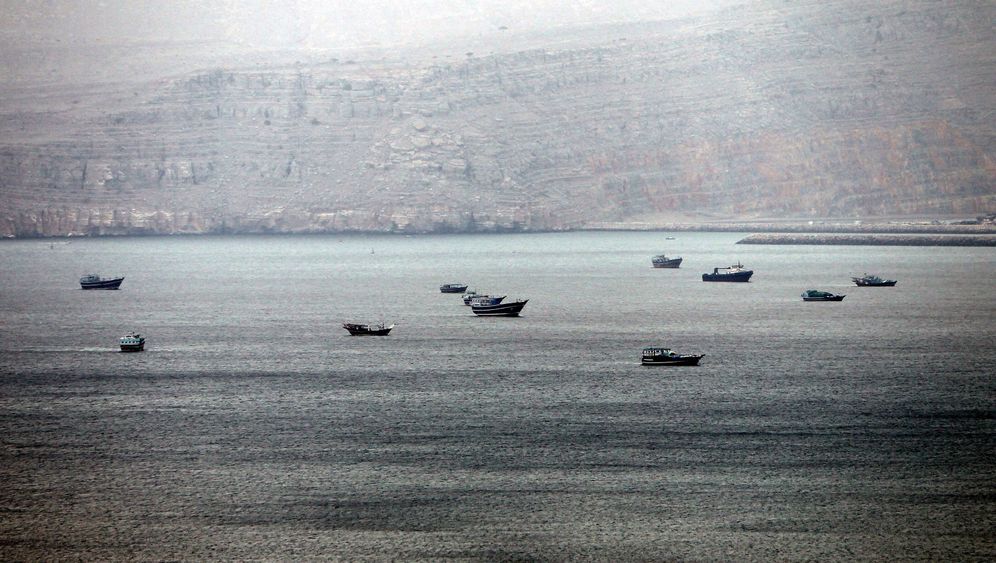 Arwind would prefer not to be called a smuggler, or to give his full name. Rather, he insists, he runs an import-export business specializing in synthetic leather shoes from China, wedding dresses, fabrics and satellite receivers. But he also likes to trade in refrigerators, auto parts and Coca-Cola. Indeed, the polite 39-year-old Indian says his business is about "whatever Iran needs at the moment." And lots of things are needed in Iran now, particularly due to the sanctions that have been imposed and the resulting paucity of trade between Iran and the West. Indeed, the trade restrictions are soon to become even tougher.

Arwind is sitting in a shack behind his storage area writing in a thick, blue order book. With 150 clients to serve and business booming, there's plenty of bookkeeping to do. He worked his way up from selling contraband cigarettes to running a real company. Behind his storage area, he has built a concrete pool where he and his family picnic on the weekends.

Seventeen years ago, Arwind left the northern Indian state of Punjab and made his way to the small port town of Khasab, which looked then much as it does today: a rocky, sun-bleached appendix of land in the north of Oman. There are a few thousand houses in the middle of nowhere -- framed by bare cliffs. In the traffic circle are two crossed axes of the kind worn on people's belts during festive occasions. Goats wander about in the streets. An airplane lands in the middle of town twice a day. Those who forget to order a cab in advance have no choice but to walk.

Khasab is not the kind of place one expects to find a thriving import-export business. But the place is rumbling with the sound of trucks, most of them coming from the United Arab Emirates (UAE) next door. "Our customers travel to Dubai and place their orders there," Arwind says. "Their purchases are shipped to us by truck, and we forward them on." "Forwarding" in this case means unloading the goods from trucks and then loading them onto boats. The goods are then ferried across to Iran. That's duty-free, Omani style.

Arwind says Iranians like to go shopping in Dubai and have a particular weakness for iridescent fabrics, South Korean flat-screen TVs and Finnish cell phones. They like to buy Chinese satellite dishes because they are banned in Iran. They like to drink mango juice from the UAE and Coca-Cola. As far as he sees it -- sanctions or not -- the Iranians have a right to enjoy a bit of luxury. And he is happy to help. After all, even smugglers need logistical assistance.

The only good thing Khasab has going for it is its location at the tip of the Musandam Peninsula, which sticks out like a thumb into the Strait of Hormuz, the narrow sea passage separating Iran and the Arabian coast. The Portuguese once established a port here to load up on dates before heading out on their campaigns of conquest.

These days, dozens of speedboats swarm into the port like wasps every morning. The boats are small, agile, painted in camouflaging colors and outfitted with twin, high-powered outboards. The Iranian smugglers can make the 85-kilometer (53-mile) trip between Khasab and the Iranian island of Qeshm some five times a day.

The trip is often a dangerous one. Winds and waves can cause problems, as can the massive tankers bringing more than 16 million barrels of oil through the strait each day. But an even greater risk is posed by Iran's Revolutionary Guard, which keeps a close eye on the smuggling activities. Men in Khasab's port say the Iranian soldiers charge the equivalent of €40 for each crossing and that those who refuse to pay are arrested.

Getting It While the Gettin's Good

The place has long been a center of trade, but the cross-border smuggling only really got going after the Iranian Revolution of 1979. It picked up even more in 1997, when a paved road was built between here and Dubai, shortening the journey to two hours. At first, it was just about avoiding customs and taxes. Then the United Nations imposed its first sanctions on Iran in 2006. That significantly reduced legitimate trade, but Arwind's business has just kept growing.

A few years ago, it was said that goods worth a half million dollars were moved each day in Khasab. Now, that figure is likely to be much larger. "A few sanctions are good because then the prices go up," Arwind says. "But too many sanctions are bad for business." He is concerned that the international community may take a closer look at Khasab -- as happened recently to Dubai, which had long been a significant transit point for goods headed for Iran.

Arwind says that no one has ever tried to put a stop to the trading. He is careful to point out that his business dealings are legal, at least as far as the formalities in Oman are concerned. In fact, the Iranians arrive carrying day visas, and there's even a customs station in the port. There, they fill out forms and register their cargo -- though it's rare that someone looks beneath the tarps for contraband.

Best Not to Ask Questions

Nevertheless, it's obvious that smuggling is taking place. Indeed, the local tourism agency has even made the unique trade operations part of its sightseeing tour. Still, people who seem overly interested can quickly find themselves inside the police station. And that's because the smugglers' boats are rarely empty on the trip to Khasab. In addition to goats, they also reportedly bring back heroin and illegal immigrants. But asking about such matters is just as taboo as inquiring into the sultan of Oman's private life.

No one here is interested in seeing any changes in the lucrative smuggling business because everyone benefits from it. The town has rose-colored villas and a brand-new mosque. The fishermen of Oman have now become forwarding agents, and Indian immigrants handle the import-export side of the business. "We earn the money," Arwind says. "The Omanis are enjoying their lives."