German Defense Minister Franz Josef Jung is not a big fan of change. When he speaks about the Bundeswehr, Germany's military forces, and their missions abroad, he has a tendency to always use the same expressions. They seem to somehow keep him grounded.

For example, one of his favorite ways to describe the German soldiers operating in Afghanistan is to say that they are "well-trained and well-equipped." He also likes to say that the Bundeswehr's collaboration with elements of the Foreign Ministry, the Interior Ministry and the Ministry for Economic Cooperation and Development (BMZ) stationed in Afghanistan has been so successful that Germany's "networked approach" has even been "adopted in its entirety by NATO."

For once, Jung should be forced to read his military's confidential reports. Some of the internal documents written by troops serving in Afghanistan, which were viewed by SPIEGEL, describe the situation as "critical." They complain about the severe lack of vehicles, weapons and aircraft as well as about the paucity of supplies and replacement parts. They lament the "deficiencies" in the training of the soldiers and bemoan the fact that the much-praised collaboration between the military and civilian agencies in reconstruction efforts is actually functioning pretty terribly.

A Serious Lack of Coordination

Jung and other German politicians may be currently waging a theoretical debate over how long Germany's mission to Afghanistan should last. But for the soldiers on the ground, the problems are much more concrete. They would already be a lot happier if they could fight under adequate conditions.

The fact is that even some of Germany's pet projects in Afghanistan are failing. Whether it's civil reconstruction, developmental aid or training police officers, none of it is working. And for proof, all you need to do is look at the reports coming out of Kunduz, Kabul, Faizabad and Mazar-e-Sharif.

The reports find, for example, that collaboration with the BMZ, the German ministry responsible for development, is proceeding "not so successfully." It says that, even seven years into its mission in Afghanistan, the "implementation (of aid)  continues to be inflexible" and that BMZ projects "are still invisible to the local population." Officers quoted in the report say that these failings tend to undermine "the credibility of Germany's involvement." They add that "starving people are much more impressed by food than they are by pamphlets."

When it comes to training Afghan police officers, even Jung will admit that things "could be improved." But he doesn't like to say things like this in public because he doesn't want to be seen as criticizing Interior Minister Wolfgang Schäulbe, his party colleague in Chancellor Angela Merkel's center-right Christian Democratic Union (CDU). But German officers, on the other hand, are not shy about criticizing the numerous other players on the ground -- including US soldiers, shady private security firms, the EU-launched police-training mission EUPOL, as well as German police officers and military police -- for allegedly working alongside, rather than with, each other. "When it comes to this matter," says one officer, "we need some sort of coordinating element."

Supply Problems, or Not Making Do with Less

On top of all this, the Bundeswehr also has to deal with some serious problems of its own, particularly its non-functioning logistical supply system. According to internal reports on the lack of supplies, German troops often have to wait months for urgently needed materiel, which creates a "permanent administration of scarcity."

The reports also conclude that, at times, more than half of the roughly 700 armored vehicles Germany has shipped to Afghanistan are not in suitable condition to be deployed. Owing to "missing replacement parts and insufficient repair resources," the military is forced to leave many of its "Dingo" and "Wolf" armored vehicles sitting around unused "sometimes for several weeks." Likewise, the vehicle fleet has been judged to be "inadequate" on the whole, and the vehicles often have drivers without the proper training for handling them off-road.

When it comes to aircraft, things aren't any better. Reports say that some of the maintenance resources for the German Transall military transport planes based in Mazar-e-Sharif are "in bad shape." The fleet of transport planes is already 40 years old. As the soldiers describe it, they come here to be "cannibalized." The reports are often written in a type of officialese that makes things seem rather harmless. For example, one says that "Replacement parts had to be secured using a process of 'controlled disassembly,'" adding that there were not enough "qualified" mechanics.

Likewise, it's already been a few years since a German general complained that putting your hopes in the CH-53 military helicopter "is like rolling the dice." In fact, the military has been calling for more helicopters for as long as it has been deployed in Afghanistan. But even with two more helicopters, to add to the fleet of six, nothing much has changed. The only improvement was to the statistics, since the helicopters arrived without any pilots to fly them. As one person commented rather dryly: "The staffing level was not adjusted to the number of aircraft."

The fact is that the Bundeswehr is caught in a vicious cycle. While expenditures for missions abroad, pensions and personnel continue to constantly rise, there is always less and less money for replacement parts, repairs and training back in Germany. NATO calls on its members to allow flight crews to train for 180 hours each year. But, given its budgetary constraints, Germany only lets its crews fly for at most 70 hours, which is far too little to get them into a "combat ready" state.

The results are shocking. At the moment, Germany has hardly any CH-53 pilots who have the necessary certification to make "dust landings" in Afghanistan's semi-arid landscape, to fly in high mountains, at night or in adverse weather conditions. It's a state of emergency centered around personnel that will soon be affected the "Transall" as well: Many of the transport plane's pilots have retired and migrated to civilian airlines, perhaps because they rarely even got a change to take off in the Luftwaffe, Germany's air force.

Furthermore, the Bundeswehr often also has a problem in terms of operational awareness. In the run-up to the presidential election on Aug. 20, reports emerged about a "key deficiency" in Afghanistan. Military commanders were complaining that they had no "comprehensive view of the situationparticularly when it came to the identities, locations and intentions of opposing forces operating in a concealed manner," -- i.e. the Taliban.

Likewise, commanders did not have enough armored Fennek reconnaissance vehicles to send out on patrol. After a number of these vehicles were lost to enemy fire, the budget committee of the Bundestag, the lower house of Germany's federal parliament, recently agreed to order some new ones: 10 units, €39 million, to be delivered in 2011.

Interpreters who can speak local dialects are in short supply here, as are secure telecommunications devices. It's often the case that soldiers are forced to communicate using mobile telephones, which are far from secure. And since the German computer network doesn't have the correct level of encryption, soldiers aren't allowed to forward information classified as "secret" from ISAF's main headquarters -- even when lives are on the line.

'Not Sufficient for Timely Operational Support'

The Luna reconnaissance drones, which transmit images in real time, won't function in summer temperatures that usually reach 40 degrees Celsius (104 degrees Fahrenheit). "Attempts to cool down the aircraft using air-conditioning units before flights have not been successful," the soldiers report.

When commanders order photos from the Luftwaffe's Tornado reconnaissance jets, they are delivered "in excellent quality" -- but only after three days. "That is not at all sufficient for timely operational support," reports say.

And the weapons the Germans have at their disposal are not particularly well-suited to their mission. If a soldier is wearing his flak jacket, which he is obliged to do, he can't really aim his standard G36 automatic rifle. "Targeted shooting is either not at all possible or is restricted," according to reports.

The machine guns on top of "Dingo" armored vehicles can only be used to shoot "in the direction in which the vehicle is driving" -- and only long as the soldier operating it is strapped into the seat, which he is obliged to do under the rules governing the peacekeeping operation in Afghanistan. As a result, it's impossible to engage enemies attacking "Dingos" from the side or from behind. "Weaponry that should, in principle, be useful is actually purely for show and can give the soldiers a false sense of security," one report says.

In his attempts to deal with these deficiencies, the longest-serving officer in Kabul, who is responsible for the security of all visitors coming from Germany, has come to a bizarre conclusion. As he puts it, the best protection one can have in the Afghan capital is "to not be noticed at all." Instead of chauffeuring high-ranking guests around in camouflaged SUVs, he believes that the army should obtain some "civilian vehicles with analog security systems." As he sees it, this would allow people to remain as inconspicuous as possible and "thereby reduce the risk inherent in the situation."

These measures, however, only apply to VIPs, such as the defence minister. But that doesn't change the risks that soldiers face on a daily basis.

It wasn't that long ago that Defense Minister Jung was heaping praise on the Bundeswehr. But not everyone is so satisfied with the status quo. "The long-known problems with equipment and training have not been remedied but merely put off to one side," says expert Elke Hoff, a defense expert for the business-friendly Free Democratic Party (FDP), in criticizing Jung. The German parliament's military commissioner, Reinhold Robbe, has called for "urgent improvements" in the protection available to soldiers.

This urgency could soon become more acute as the US is putting immense pressure on Berlin to extend its military mandate in Afghanistan. US President Barack Obama is sending an additional 20,000 troops to the country. The current parliamentary mandate for Germany's participation in the ISAF mission runs out on Dec. 13. Last year, Jung would have liked to increase the number of troops from 3,500 to 6,000. However, the fact that the Christian Social Union (CSU), his CDU's Bavarian sister party, was facing a state election in Bavaria caused him to reduce this figure to 4,500.

The Americans haven't forgotten this, and US diplomats have already told leading CDU politicians that -- out of consideration for Angela Merkel -- Obama is only holding his breath until after Germany's Sept. 27 election. Once the election is over, the president will be demanding that the Germans send more combat troops to the front. 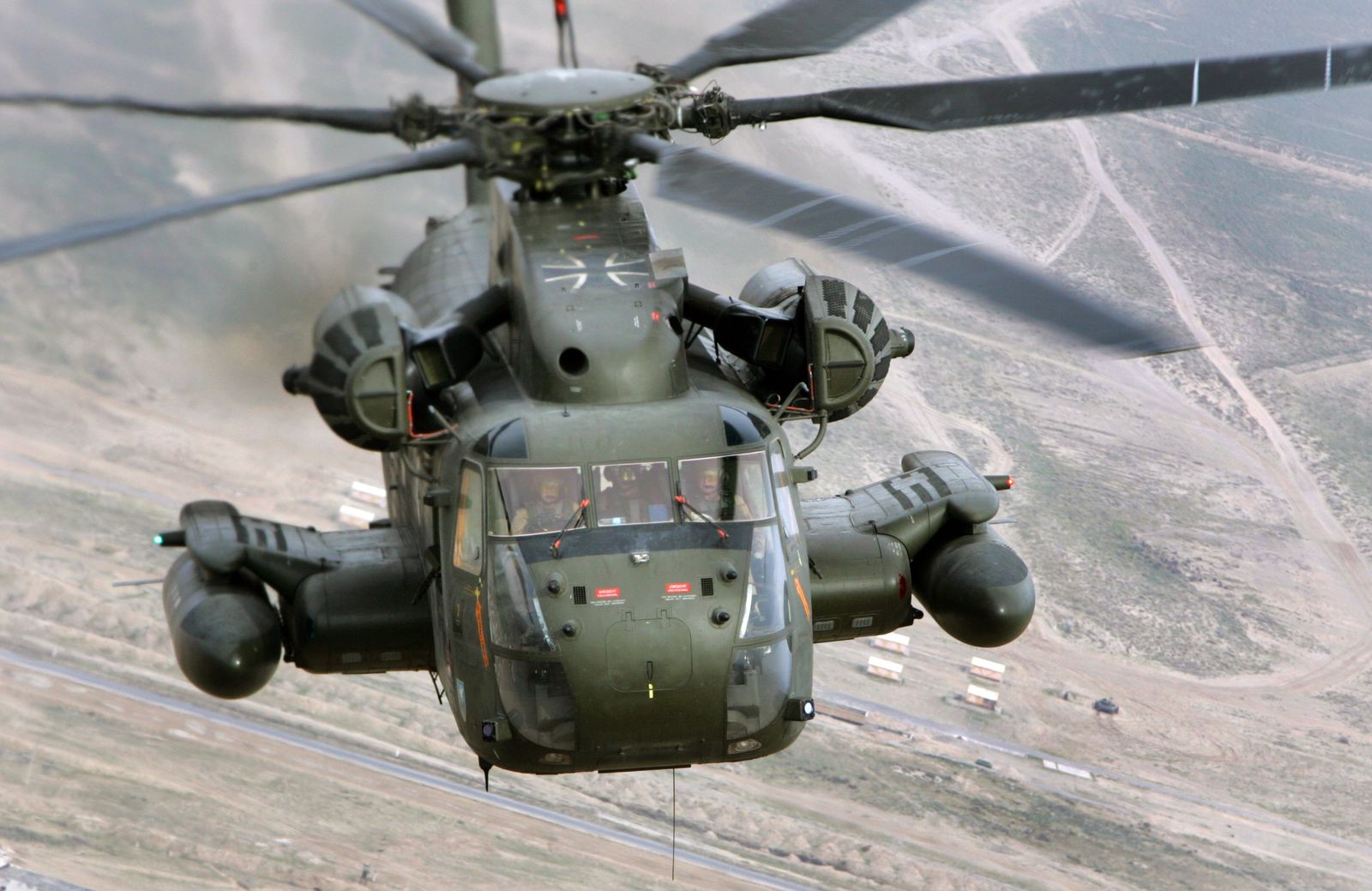 A CH-53 Military Helicopter in Afghanistan.