A specter is haunting the United States. That, at least, is what the Republicans seem to believe in this election season. And the specter has a name: Europe.

US President Barack Obama, said leading Republican candidate Mitt Romney during the Republican debate on Saturday, wants to turn the US into a "European welfare state." At a weekend appearance in New Hampshire, site of a crucial primary vote on Tuesday, Romney said "I don't believe in Europe. I believe in America."

In an election year overshadowed by the threats posed by the European economy and concerns about the break-up of the European common currency, it is a message that Romney has been delivering every chance he gets. And he's not alone. Europe-bashing has become an important stump-speech cornerstone for the entire Republican field. The message, as Romney never tires of delivering it, is clear: "I don't think Europe is working in Europe. I know it won't work here."

Negative portrayals of Europe are, of course, by no means a novelty when it comes to American political campaigns. Candidates, particularly Republicans, have long blasted their opponents for being a bit too cuddly with Europe. In 2004, when George W. Bush was battling John Kerry in his re-election campaign, Europe played an outsized role, primarily because France and Germany had declined to support the US invasion of Iraq. Because Kerry spoke fluent French, he was portrayed as the "French candidate."

A Club of Losers

Indeed, the Kerry campaign did its best to distance their candidate from his French connection. A distant French cousin of Kerry's was asked to avoid speaking with the press. And Kerry himself made a point of saying that he preferred American bottled water to Evian, the French brand.

This time around, though, with Europe deep in crisis, the Continent has become an even more prominent element of Republicans' stump speeches. With high state debt, high unemployment in several countries and a sluggish euro-zone economy, the European Union is seen as a club of losers.

"You want to see America after the Obama administration is through," arch-conservative candidate Rick Santorum said on the campaign trail last week, "just read up on Greece." Santorum is fond of the sentence, and often replaces that country depending on the relative economic situation in Europe. Portugal likewise gets mentioned frequently, as do Italy and Ireland. Lately, France too has been making an appearance.

The US president, in other words, is merely a European in disguise. That is the message the Republicans would like to convey. Newt Gingrich, in particular, never tires of calling Obama a "socialist." Obama has a "European social democratic vision" says Romney, and claimed recently that per capita income in the US was "50 percent more" than in Europe. And Ron Paul, perhaps the most extreme of the Republican field full of extremists, advocates pulling US troops out of Europe, in part so that America is no longer in the position of subsidizing "socialist Germany."

Such attacks would, of course, be ridiculous were they not so effective at a time when the economic outlook in the US is far from rosy, particularly given the danger that the euro-zone debt crisis could put a quick stop to America's fragile economic recovery.

Indeed, even Obama himself has become a fan of Europe-bashing. As long as the euro crisis remains unsolved, the president has taken to repeating, the global economy will continue to suffer. The Obama administration has also repeatedly demanded that European leaders -- first and foremost German Chancellor Angela Merkel -- take more decisive action. Treasury Secretary Timothy Geithner has traveled to Europe several times in recent months to lend urgency to the message.

Why the focus on Europe? Obama's re-election depends on at least some improvement in a moribund US economy and in a persistently high unemployment rate of 8 to 9 percent. Blaming the Europeans makes for a convenient scapegoat.

But for the Republicans, the focus on Europe has a different motivation. The war on Europe is not merely one guided by economic concerns. It is presented as a cultural confrontation. "American elites are guided by their desire to emulate the European elites," says Gingrich. "As a result, anti-religious values and principles are coming to dominate the academic, news media and judicial class in America." Secular Europe, in other words, has become a threat to Christian America.

Romney, too, sees it as a battle for the soul of America. The former Massachusetts governor, who has been dogged by accusations that he is a flip-flopper and not quite conservative enough to be the Republican presidential candidate, has begun emphasizing his love for patriotic songs during campaign appearances. Hardly a stump speech in New Hampshire goes by without him quoting a verse or two from "America the Beautiful."

A Vote for Freedom

From there, it is often but a small step to expressing his disdain for Europe. "The president said he wants to fundamentally transform America," Romney said during an appearance in Iowa at the end of December. "I kind of like America. I'm not looking for it to be fundamentally transformed into something else. I don't want it to become like Europe." He went on: "I want America to be more like America, if you will. I want the songs, that patriotism that we have."

Santorum prefers to take a slightly more historical approach, comparing the European welfare state to the absolute rule of monarchies. The founders of America, he says, left Europe because they no longer wanted to be ruled by monarchs. I don't believe, he says, that resources should be redistributed from the top to the bottom.

It is a statement that sounds absurd from a European point of view -- even more so given the current state of the US economy. The American dream of being able to rise from being a dishwasher to millionaire hasn't been reality for years, perhaps decades. And a recent study by the Organization for Economic Cooperation and Development found recently that social mobility between generations is now much lower in the US than it is in Canada and in several Western European countries.

Still, the key message the GOP field wants to convey is: A vote for the Republicans is a vote for freedom.

And not, as it happens, just any Republican. The field itself has taken to accusing each other of being too "European." Recently, RC Hammond, the spokesman for Newt Gingrich's campaign, commented on Mitt Romney's alleged support for a value added tax. "The fact that he's willing to look at European Socialism shows just how far out of the conservative mainstream he is," Hammond said. 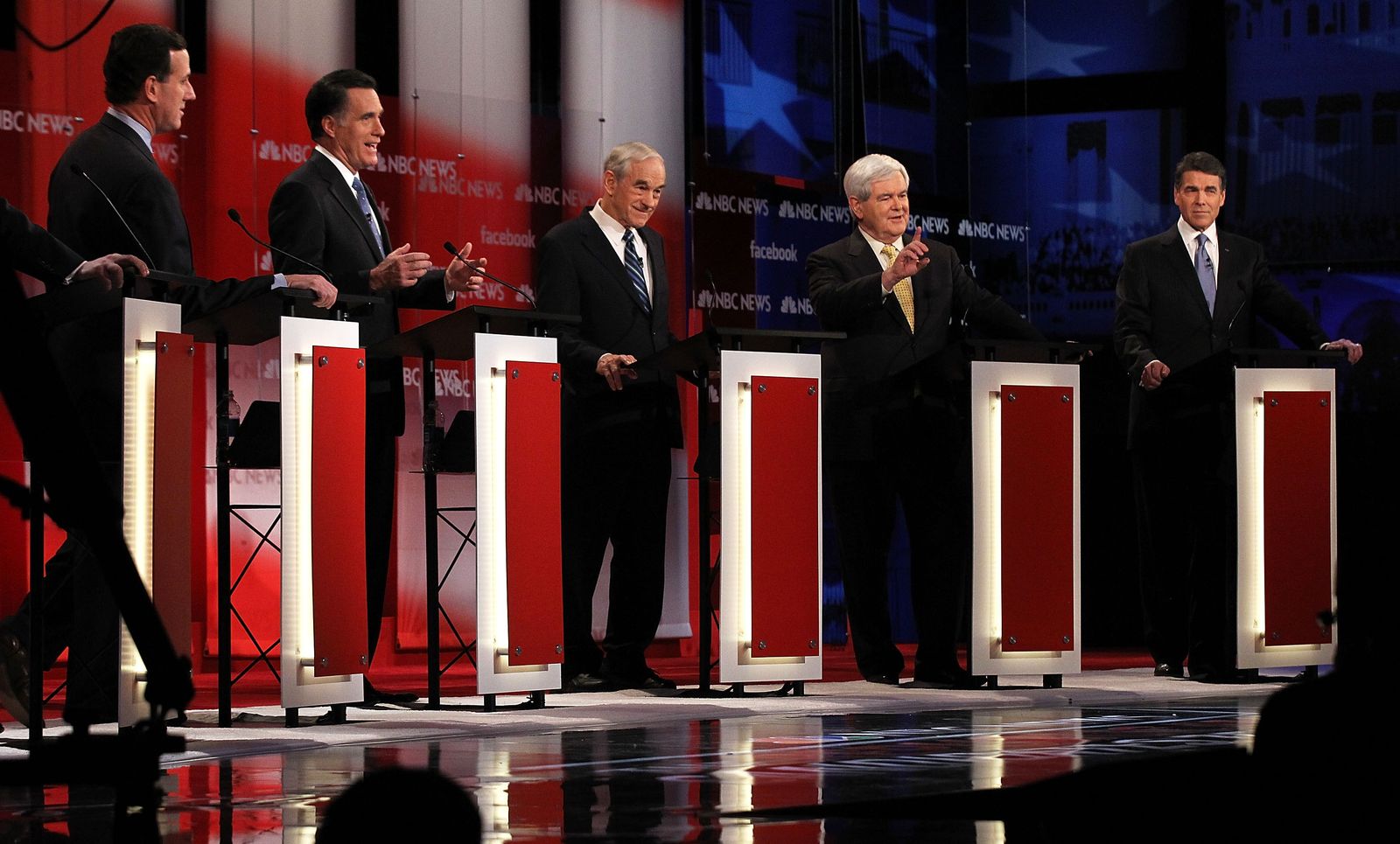 Campaigning against the Europeans in Concord, New Hampshire.