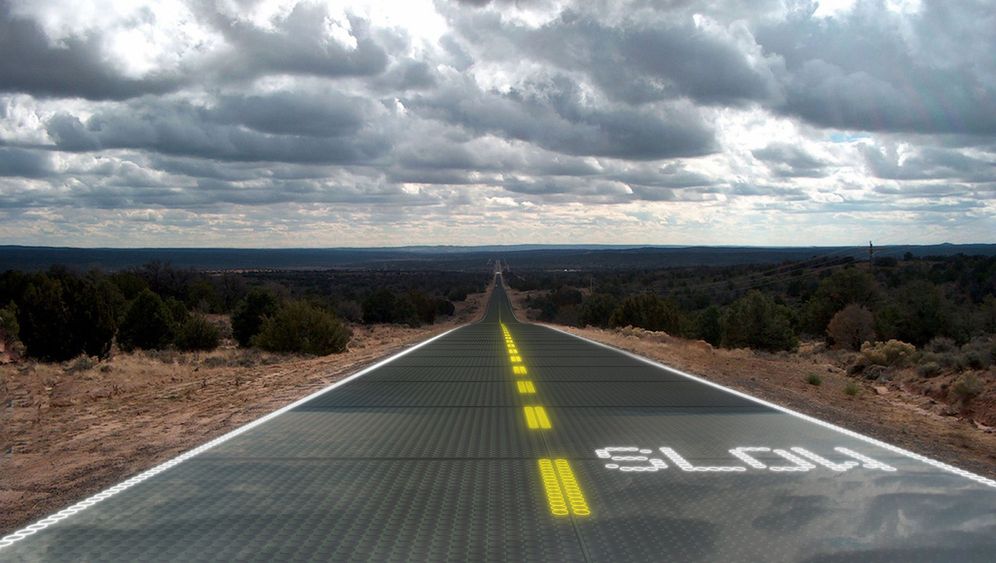 A lot of thought is put into how much energy we use to drive from point A to B. But what if the road itself could generate energy? Julie and Scott Brusaw, a married couple from Sandpoint, Idaho, have taken on just such a concept, which they hope will make the auto transport of the future cleaner and safer.

The idea is as simple as it is ingenious. Wherever roads are laid, solar panels could go instead. They would generate electricity, which would in turn be fed into the grid. Thus, oil is conserved twice: Electric cars could be charged with the energy produced by the panels, and the panels would replace the use of asphalt, the production of which requires petroleum.

Moreover, Solar Roadways, as the Brusaws have dubbed their invention, are heated and equipped with integrated LED screens, which act not only as street markings, but can also show warnings directly on the road.

The Brusaws are aware that their vision cannot be realized in a day. They've decided to start small: with pedestrian and bicycle paths or large parking lots at supermarkets. As they see it, every square meter of asphalt that gets replaced with Solar Roadway is a small step on the path toward independence from fossil fuels. The giant leap would be to take on urban roads and highways on a global scale.

"In the beginning, half the people thought we were geniuses, and the other half thought we were off our rockers," says Scott Brusaw. The electrical engineer has spent years trying to bring his wife's idea to fruition. Julie Brusaw is a psychotherapist. Roads didn't fall into either of their areas of expertise. But as the discussion in the United States about climate change intensified, the Brusaws were struck with the idea of solar roads, and the project took on a life of its own. In 2009 they received their first government grants to construct the prototypes.

The Brusaws' work was impressive enough that this spring, they are launching a pilot project, for which the state awarded them $750,000. In their hometown of Sandpoint, Idaho, near the Canadian border, the couple has built their first parking lot made from solar panels.

The Brusaws encountered a number of hurdles in their search for smart asphalt replacement, though. "It had to be textured to the point that it provides at least the traction that current asphalt roads offer -- even in the rain," explains Scott. "At the development stage, that was one of the most important requirements for the upper layer of the panels." They managed to develop such a glass, which is as hard as steel but not at all smooth. "We hesitate to even call it glass, as it is far from a traditional window pane, but glass is what it is, so glass is what we must call it," says Scott.

The composition of a panel is always the same and consists of three parts: on top, a hard glass layer containing the solar panels, LED lights and heating. Then comes the second layer, which contains the controller, where a microprocessor unit activates the lights and communicates with the road panels. Finally, the bottom layer ensures that the electrical current collected from above makes it to homes and charging stations for electric cars. In addition, there is space for other cables, such as television or telephone lines.

And the Brusaws have thought even further ahead. Along the sides of the modules are canals that collect water drainage for filtering. That way the water isn't wasted and can be used to water fields, for example.

But what happens in the event of an earthquake? "While we haven't had a chance to test it yet, we understand that an earthquake can be catastrophic for a road of any type. Basically, any such force that could destroy an asphalt or concrete road would have a similar result with a Solar Roadway," says Scott Brusaw. But if one solar road panel is broken, it can simply be replaced, because all of the elements connect to create an intelligent street network, which can even use LED lights to alert drivers to dangers around the next curve.

If the technology works for the pilot project, there's hardly anything that speaks against it, except perhaps that the panels might not generate as much electricity as solar panels that are positioned according to the sun's movements. Still, solar roads have massive potential. In Germany alone, there are some 230,000 kilometers (around 143,000 miles) of roadways, including the autobahn, federal, state and county roads. That's about 18,000 square kilometers of area, accounting for about five percent of the country's total territory.

There's just one catch: Currently the solar road panels cost about three times as much as conventional roads, the Brusaws say. But over time, they add, the technology could begin to actually turn a profit. It sounds almost too good to be true.