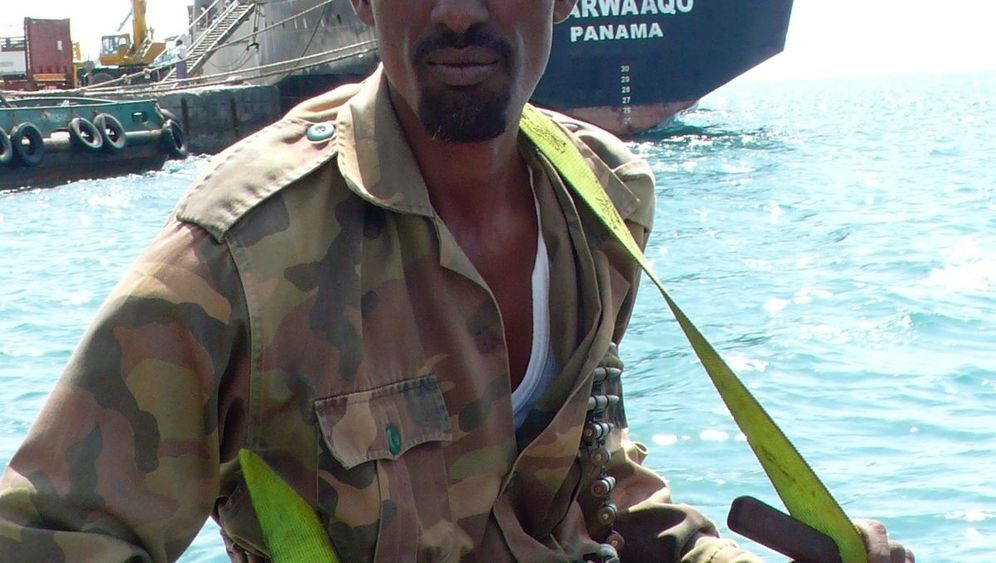 Omar Abdullahi, 45, knew the patrol boat routes. He knew the coast guard's equipment, and he knew their salaries were a meager $45 (€32) a month. That was all he made, too, despite being head of the Las Qoray outpost. At sea, he saw how easily the pirates in their fast boats got away from his fellow coast guardsmen. And, on land, he saw how they could afford expensive cars and fancy houses.

Finally, Abdullahi had had enough. In 2007, after 14 years of service, he left the coast guard of Somaliland, a republic stretching along Somalia's northern coast that declared independence in 1991. At the time, he said he could make more as a fisherman.

These days, Abdullahi is sitting in a prison in Berbera, a city on Somaliland's northern coast, waiting for his case to go to trial. On March 23, his former coast guard colleagues arrested him and six accomplices in a boat outfitted with a GPS system rather than gill nets. Members of the coast guard claim to have seen them throw their AK-47s and RPGs overboard before their arrest. The indictment says they were pirates and that they had attacked tanker and container ships.

Colonel Ahmed Ali is the commander of the coast guard unit in Berbera. He says his former colleague had spent some time in Eyl, the pirate stronghold on the country's eastern coast. "We know that he made a lot of money there," Ali says, adding that it didn't come from fishing. "If he were a fisherman," Ali explains, "he would go fishing where he comes from and not here."

Berbera's jail is a dark vault built by the Turks in the 19th century. He provides only evasive answers to questions. He insists that he is a fisherman and has five children to feed. And he claims he made $200 a month as a fisherman, considerably more than in the coast guard.

A Brand New Prison for Pirates

Abdullahi is just one of roughly 350 suspected pirates sitting in prisons on the northern coast of Somalia, in both Somaliland and neighboring Puntland. In Somaliland, in particular, officials are eager to get more serious about combating piracy. With strong support from the European Union, the United Nations has built a brand new prison in Hargeisa, the capital of Somaliland. The two organizations invested roughly $1.5 million in the detention center, which now holds 88 suspected and convicted pirates.

Piracy has become an expensive matter for this seafaring nation. Indeed, a recent study found that piracy off Somalia and in the Indian Ocean has cost the global community somewhere near $10 billion. It also says that average ransoms for ships grew from $150,000 to $5.4 million between 2005 and 2010, and that there have been a record 98 attacks between January and March in this year alone. There are additional costs as well: having ships out of service, the deployment of naval vessels from a number of countries, tankers and freighters needing to take long detours to avoid danger zones, holding court cases and incarcerating the pirates.

Western security firms have now discovered piracy as a new business sector -- one worth millions. Their portfolio of services includes making contact and negotiating with pirates, supporting relatives and preparing and delivering ransoms. Occasionally things go wrong, such as when Somalian officials recently arrested three Britons, two Kenyans and an American at the airport in Mogadishu. When they searched through the group's luggage, they found $3.6 million in cash meant as ransom for two ships seized by pirates last year.

Ransoms Are a "Type of Tax"

Among those sitting in the new jail in Hargeisa is Ahmed Muhammed Adam, from the port city of Bosaso in Puntland. He was arrested on April 17, 2010 along with six others.

Like almost all the other suspected pirates incarcerated in Hargeisa, Adam claims to be just a hard-working fisherman with no connections to piracy. The motor of his boat broke down and Adam says they then drifted westward from the coast of Somaliland. Then, he says, a foreign frigate spotted his boat and relayed its coordinates to the coast guard. Adam was given a 15-year sentence.

Despite his denials, Adam went on to provide some astonishing insights into the piracy trade. "Anyone who goes out is assuming a risk," he says, "and most of them suffer a defeat." He adds that, before becoming a lucrative business, piracy was a way to fight back against foreign ships. In fact, the business has gotten so lucrative that the high risks involved no longer frighten people off. He also says that it won't stop, either, because people like him view the ransoms "as a type of tax."

These days, lots of people are dying off the coasts of Somalia, and only a fraction of the victims are ever identified. In mid-May, helicopter-borne American soldiers shot dead four Somali pirates as they were trying to board the Artemis Glory, a German supertanker. The ship's crew had already repelled a number of attacks before the helicopter took off from the USS Bulkeley, an American destroyer, and came to their rescue.

In recent months, there have been a number of similar episodes. But they still haven't done anything to reduce the number of pirate attacks. On the contrary, as the pirate Adam puts it: "Whenever 20 die, there are always 20 more to replace them."

The International Effort through Pirate Eyes

Adam also says that the pirates have devoted some of their profits to obtaining better equipment. "They now have speedboats that can escape from any warship," he says. He adds that the prestige that pirates gain from a successful seizure is enormous. "Whoever brings back a ransom is untouchable."

As such, it is no wonder that pirates who have successfully seized a ship enjoy so much support on land. "The major clans and families are also involved," Adam says, "all of them." He adds that the state no longer has any influence in Hobyo, a large pirate nest on Somalia's eastern coastline. "A minister recently wanted to talk with the clans," Adam recounts. "But he encountered serious difficulties already on his way to Hobyo."

Adam is also convinced that the state is powerless to stop piracy. "In the 1990s," he explains, "you could have still pulled it off. But that's no longer the case. It's too late now; the ransoms are too high."

Another prisoner in Hargeisa is Ahmad Muhamad Jama. The 30-year-old also claims to have been a simple fisherman and says his boat had also merely drifted off course. Though he claims to have never encountered any pirates, Jama says he supports them "morally." He also seems surprisingly familiar with the piracy business. "It's very hard to stop," he explains. "People are forced to avenge their brother or father whenever they are killed at sea." He also compares the riches that can come from piracy to "brainwashing for the young."

Indeed, the pirates have become heroes for many young Somalis. One of the prisoners in Hargeisa is 18-year-old Muhammed Yussuf Abdia, who was sentenced to a year in jail for attacking his father with a machete. The young man has no compunction about saying that he wants to become a pirate -- the "commander of a unit," no less -- once he is released. His role model is Farah Ismail Ilie, one of the unofficial bigwigs in the Hargeisa prison.

Discussions with prisoners at Hargeisa reveal the degree to which the situation has escalated. There are often no witnesses to the encounters between naval ships, pirates and the vessels they prey upon. Jama claims to have lost three relatives himself. He says they headed out to sea to go fishing. "We never saw them again," he says, "only the wreckage of their boat washed up on shore." No one knows if the boat was the victim of an accident or an attack by a foreign warship. "Many never come back," says Adam, Jama's fellow prisoner.

Hargeisa prisoners also provide a clearer picture of how the foreign fleets operate. Naval crews from around the world prefer to take as few pirates into custody as possible. Instead, they stop the suspected pirate boats and, if the pirates haven't already thrown them overboard themselves, they confiscate weapons, scaling ladders and GPS devices. Sometimes they destroy the outboard motors; sometimes they give the pirates food and water.

One notorious case involves the Russian destroyer Marshal Shaposhnikov. In May 2010, the vessel arrested 10 Somalis after they attacked a Russian oil tanker. The Russians seized their weapons and navigation instruments and then gave them a little food and water. Then they were left to their own devices 600 kilometers (373 miles) from shore. The pirates were never seen again.

Another pirate in Hargeisa tells the story of a Russian naval vessel that stopped his boat, tagged it with paint, removed its outboard motor and reported its coordinates to the Somaliland coast guard, which merely had to pick them up.

The pirates aren't the only ones to profit from their thriving trade; the fishermen do as well. Yussuf Muhammed Ahmed, the 39-year-old head of the local consortium of 500 fishermen, stands on the pier at Berbera. "When it comes to our earnings," he says, "the pirates are a boon. Otherwise we'd have nothing." He explains that pirates have forced the fishing fleets from Spain, India and Italy to go elsewhere. Catches, he said, are much higher now than they were five years ago. Only deep-sea fish have yet to recover.

In the harbor's small military area, base commander Col. Ahmed Ali deploys the members of his coast guard. They are a very strange-looking bunch, wearing well-worn boots and a mishmash of uniforms manufactured in the West and the former Soviet Union, boarding boats that the pirates can easily outrun. With the 400 men and 10 boats at his disposal, Ali is supposed to safeguard activities on almost 1,000 kilometers of coastline. He opts to say nothing of the replacement parts that never turn up, the lack of fuel and the salaries that always arrive late.

Ali knows what journalists want to hear. "Piracy is a scourge," he says. "But if we really want to get good at this, we need better radars for our boats, better training and real speedboats." And then he adds: "Instead of spending billions of dollars to deploy warships, the international community should invest in us. It would be a whole lot cheaper." 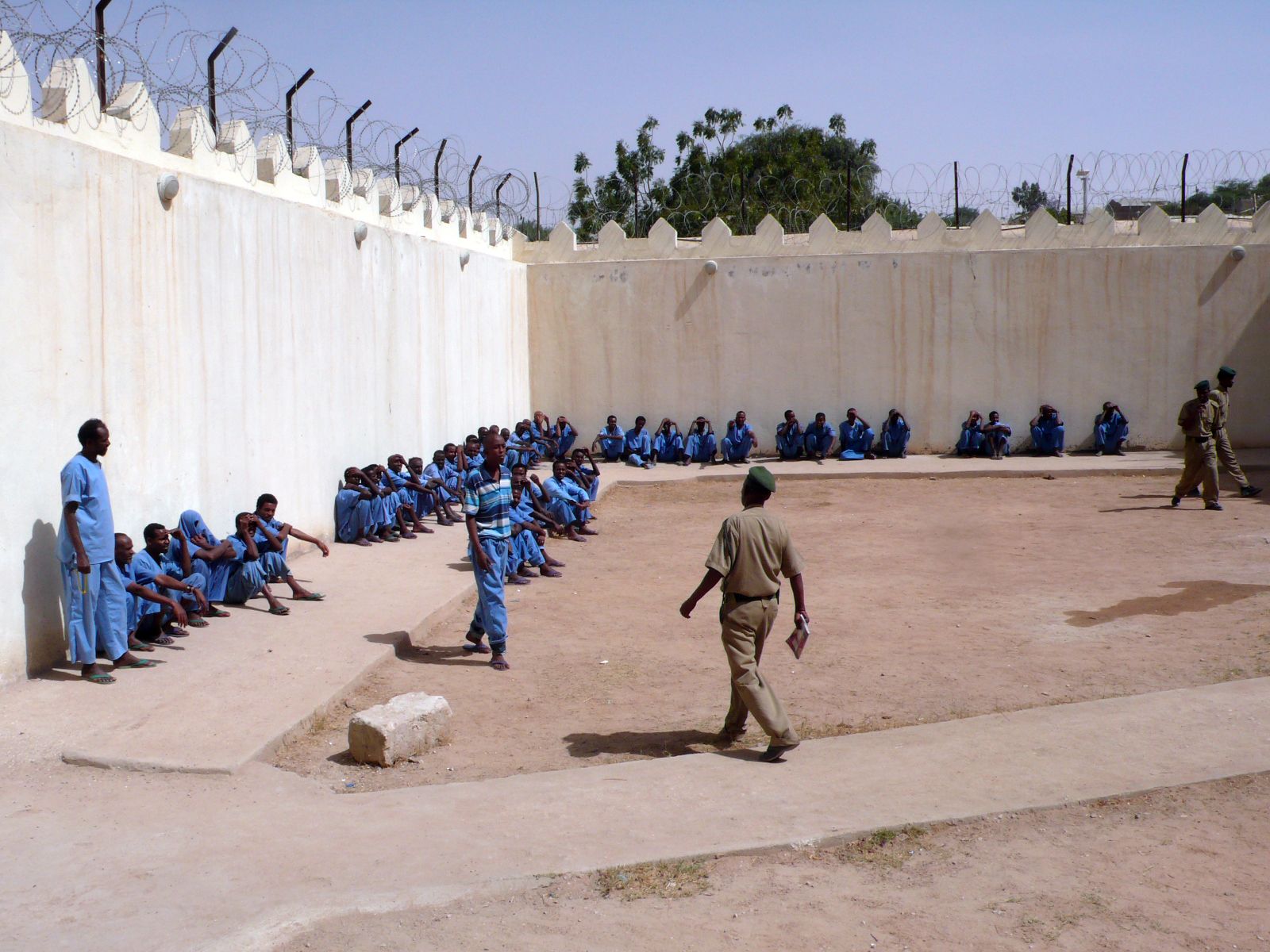 Around $1.5 million has been invested into the prison in the port town of Hargeisa by the United Nations and the European Union. Some 88 suspected and convicted pirates are currently being held there. Piracy is costing the world a fortune in ransoms, security firms and rerouted ships.