Germany is pushing for the broadest possible free-trade agreement between the European Union and the United States, against resistance from France and other Southern European nations which want to exempt issues like food regulation and gene technology from the talks in order to protect the interests of their farmers,

"We're aiming for a big breakthrough rather than a minimum consensus," said Economy Minister Philipp Rösler of the pro-business Free Democratic Party. "It would therefore be damaging to limit the agenda from the start and to exclude certain areas."

The German government is concerned that the US might in this case respond by demanding exemptions itself, which would end up producing only a modest agreement.

Berlin is trying to underscore its position with a study it commissioned from the Munich-based Ifo economic research institute which shows that the greater the reduction in trade barriers is, the bigger the economic advantages of a trans-Atlantic economic union.

If customs duties are abolished, GDP per capita in the EU and the US would only grow by 0.1 and 0.2 percent respectively, Ifo estimates.

The benefits would be greater if the governments also introduced common technical norms, safety standards and competition rules. In that case the standard of living would rise by more than 5 percent in the US, more than 6 percent in Europe and more than 8 percent in Germany in the coming two decades, Ifo predicts. Trans-Atlantic trade could more than treble.

Negotiations are due to start in June after President Barack Obama called for talks on a free trade agreement in his annual State of the Union speech last Tuesday.

The sentence was included in the speech text at the last minute. The White House was at first hesitant to call for a free trade deal because of the euro crisis and because US government officials remembered the protracted wrangling over details likel poultry regulations in past negotiations.

Obama regards a trans-Pacific trade agreement as far more important. But the proposal was intended as a political signal to encourage Europeans to stay together in the euro crisis -- and to preserve the idea of a "common West" as the former publisher of German weekly Die Zeit, Theo Sommer, told a conference on trans-Atlantic trends at Harvard University last week.

"In 50 years there will be around 500 million Europeans and 500 million Americans -- and 8 to 9 billion people in other regions of the world."

Analysts say Washington wants a swift trade deal, before the 2014 congressional election if possible, and that its patience with European power-plays and prevarication will be limited. Many economists are predicting a robust recovery for the US, while austerity-hit Europe is at risk of years of recession.

If the Europeans hesitate too long, America may switch its focus towards Asia with even greater vigor. 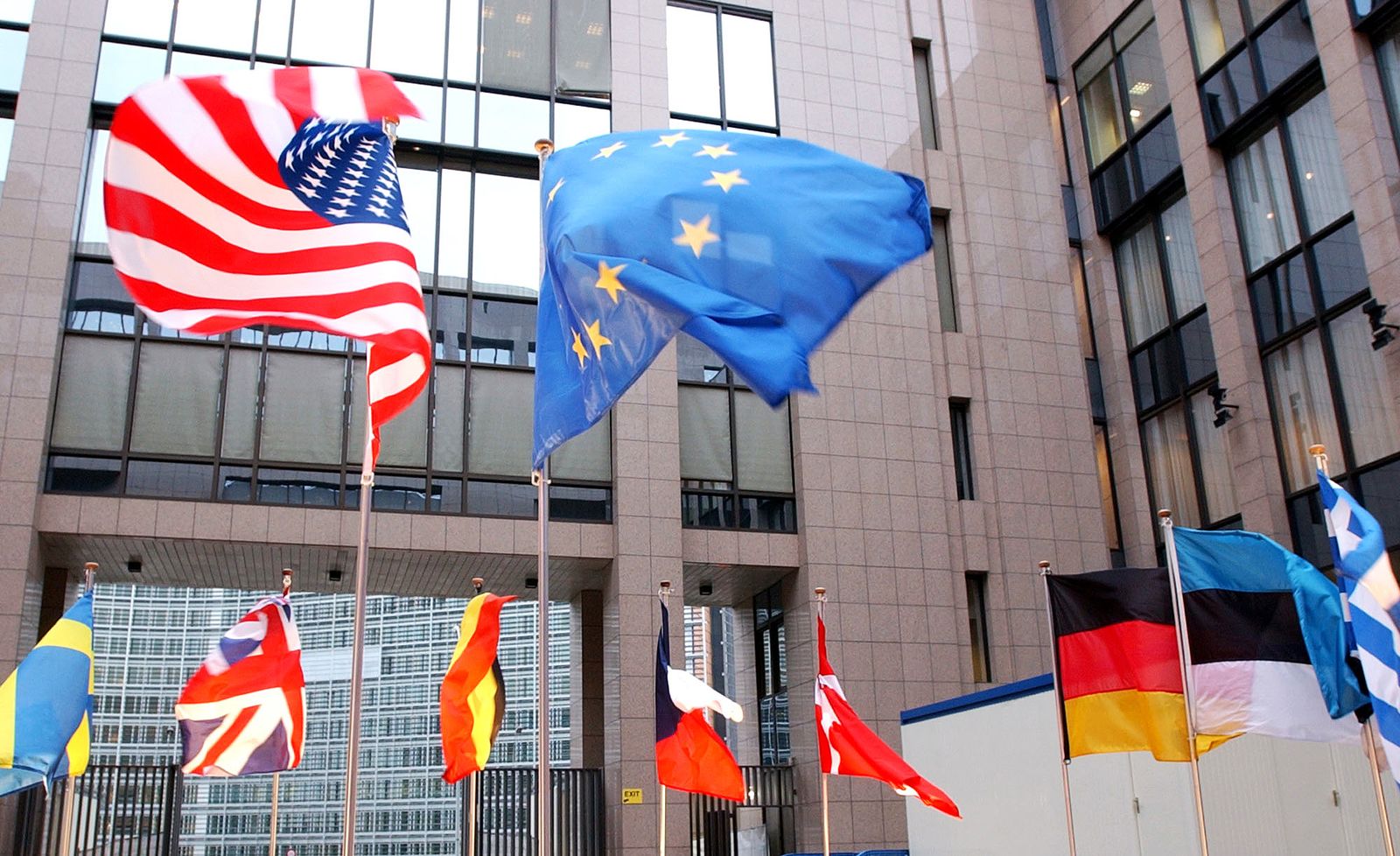 The US and EU flags at the European Council buidling in Brussels. How broad will a free-trade deal be?