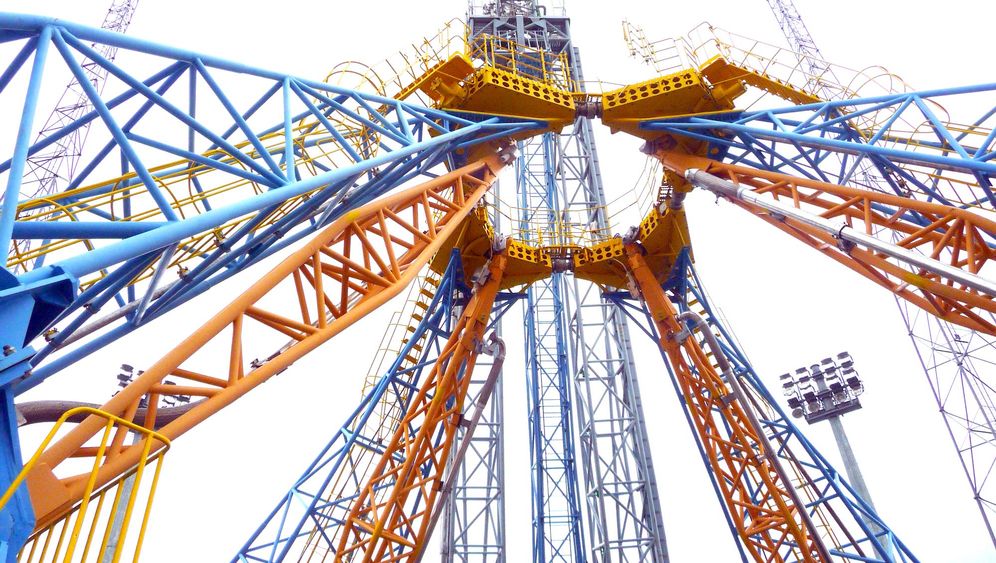 It looks like a gigantic carnival carousel, festively painted in blue, orange and yellow -- an oversized contraption surrounded by four floodlight masts and four enourmous lightening rods. Yet the site is completely silent.

But if things go according to plan, this odd structure in the jungles of French Guiana will soon be engulfed in ear-splitting roars and flames. After years of delays, the first Russian Soyuz rocket is to be launched this summer from the European spaceport in Kourou, the European Space Agency's launchpad in South America -- the most important cooperation project in international space flight.

A closer inspection of the steel edifice reveals a 30-meter (100-foot) deep hole between the supports. On the cement-covered ground, moss and algae are growing in puddles of rainwater. The guardrail surrounding the abyss does little to aleviate the dizzyness one feels when standing on the edge. It has steeply sloped sides designed to divert the noise and exhaust generated by a rocket launch. For the time being, though, it looks more like an out-of-service swimming pool than anything else.

When Russian rockets take off from the ESA site and thunder into orbit, it will mark a new chapter of cooperation in the history of space flight. The launch pad also offers the Russians a very tangible advantage in the form of natural boost to their rockets that they can't enjoy at the Russian space port in Baikonur, Kazakhstan.

At the equator, the speed of the earth's surface generated by its rotation is at is fastest because the distance to the earth's axis is the greatest. As a result, less fuel is needed to launch rockets into orbit. Although Baikonur is located in the southern part of the former Soviet Union, at 45 degrees north latitude, Kourou is located at only 5 degrees north latitude, extremely close to the equator. Launching a Soyuz rocket from Kourou will require roughly 45 percent less fuel, and the money saved should cover the added expense of shipping the rocket to South America.

The Europeans are also very keen to attract the Russians to the site, commonly known as the Centre Spatial Guyanais (CSG), and they've even invested roughly €410 million in the Soyuz launch pad to do it. But it's not just a matter of international friendship behind this decision. It's simply a matter of size.

For its launches, the European Space Agency (ESA) has been using rockets from the Ariane family, which can carry payloads of up to roughly 10 metric tons -- such as communications satellites -- into geostationary orbit at €150 million a pop. But, these days, since it often happens that the payloads needed are much smaller than 10 tons, officials at ESA headquarters in Paris are looking for a smaller, cheaper rocket to work alongside the Ariane rockets.

Since using Soyuz rockets costs about half as much as using Ariane rockets, the former are expected to attract commercial satellite customers with smaller budgets. Soyuz rockets can ferry a three-ton load into geostationary orbit using technology that has been refined over the past 50 years.

Building an Exact Copy Halfway around the World

Jean-Jaques Dordain, the ESA's director general, told SPIEGEL ONLINE that his organization had two choices. "Either we could have developed a medium-size rocket on our own," Dordain said, "or we could have started a partnership with the Russians." For a number of reasons, including political ones, the ESA chose the latter. The decision meant that it had to build a launch pad on the grounds of its heavily guarded facility in Kourou similar to the one the Russians use in Baikonur.

The Russians working in Kourou describe the new launch pad as a "copy with improvements" of the one in Kazakhstan. But the spaceport built here in the middle of the rainforest looks like an exact replica of the one on the Kazakh steppe, right down to the two storage rooms where unneeded tables and chairs are locked away. Still, there is one important difference: a mobile servicing tower that construction workers are still diligently working on. Like a giant garage on wheels, the tower is supposed to shelter the 50-meter-high (164-feet-high) rockets from the hot and humid tropical weather.

The rain puddles on the ground and the dark clouds on the horizon hint at just how important this structure will be in protecting the rockets from frequent and heavy downpours. And since the Russians have no experience in building that kind of protective structure, it has taken much longer to complete than was initially estimated.

Still, the granite is necessary to bear the weight of the rockets. A Soyuz rocket with full fuel tanks weighs more than 300 tons, and it rests suspended on the yellow-and-blue steal framework over the exhaust-air shaft. As the ESA's Jean Claude Garreau explains: "The entire weight of the rocket sits on only four points."

After the rocket launches, the steel supports tip out like a blossoming flower. While the structure might look a bit old-fashioned, it has more than proven its reliability after more than 1,700 launches.

Garreau will be in charge of the first ESA-led Soyuz launch at Baikonur. The operation will present a major linguistic challenge as the Russians run through their launching procedures in Russian but the flight safety procedures are executed in French. Nevertheless, the ESA team is optimistic that they will understand each other, and it doesn't hurt that Garreau speaks fluent Russian himself.

Still, other factors might complicate this collaboration. Although both sides are obviously partners, they don't seem to trust each other completely. This is initially apparent by the location chosen for the Soyuz launching pad on the 700-square-kilometer (270-square-mile) grounds of the space port facility. "The French authorities wanted a little bit of distance for security reasons," ESA chief Dordain says, as the rain pounding down on the tin-roofed shelter threatens to drown out his words.

This latent distrust of the Russians has led the new launchpad to be built far away from the existing ESA launch facilities in Kourou. "When we first came here in 2002, it was all still jungle," Dordain recalls. "We had to be brought here by the army in tracked vehicles." Now a road has been paved above the reddish earth. What's more, the Soyuz launchpad is closed off behind barbed wire, electrified fences and several checkpoints. Each is manned by security guards, and you have to have an access card to get in. French Foreign Legion soldiers patrol the area in tracked and all-terrain vehicles.

"There are limits to every form of cooperation," says Mario de Lepine, spokesman for Arianespace, the ESA division responsible for the space agency's rocket launches in South America. His firm will be responsible for the commercial marketing of the Soyuz launches in French Guiana. "It's best when each takes care of his own," he adds, and satellite customers who use ESA's Ariane services would most likely agree with him.

The Russians' most sensitive missions will continue to be launched from Baikonur until they are eventually transferred to the planned Vostochny Cosmodrome, which will be located somewhere near Russia's border with China. The new spaceport is supposed to help Russia become less reliant on Kazakhstan for its launching needs.

In Kourou, the Russians have responded to the Europeans' distrust by establishing various restricted zones in the Soyuz launching area. Both ESA employees and their guests are allowed to poke around with surprising freedom in the bright, air-conditioned hall next to the launching pad that is holding a gray rocket missing only its head. But those wanting to access the part of the hall where the most sensitive parts of the Soyuz rocket are being assembled must have a special authorization from the Russians. "Entry prohibited without Russian permission," reads a sign in French and Russian on the door.

Despite the difficulties, both sides are still eager to see the project succeed. The first tests are scheduled to begin in April, and the date of the first launch will depend on when the payload is finished. If all goes according to plan, the first Soyuz rocket will blast off this summer carrying two satellites that are part of the Galileo navigation system, Europe's planned competitor to the United States' GPS system.

In the specially protected control room near the launchpad, computers are being installed. The box that Garreau and his Russian colleague will use to control the launch is already in place. "I will be the first to land in the gulag if something goes wrong," the Frenchman quips.

But since chances are slim that the robust Soyuz technology will fail, it's hard to imagine him suffering that fate. And even if one or two of the rocket's engines fail, the rocket itself would still reach its target -- or at least that's what experts familiar with the technology say.

The Soyuz rocket is capable of transporting humans into space as well. "But there are no plans for that" in South America, says ESA chief Dordain. For that to happen, the Europeans would have to be prepared to offer up a lot of cash. They would also need things like warships that could fish the astronauts out of the water if they had to abort a launch after takeoff.

But maybe it will happen some day. "One should never say never," Dordain says.