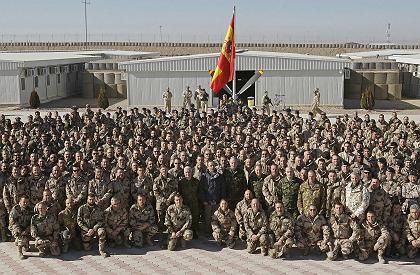 For Spain's recently re-elected Prime Minister José Luis Rodríguez Zapatero, the NATO summit in Bucharest is especially significant. There -- for the first time -- he will have a private head-to-head conversation with US President George W. Bush.

Zapatero incurred Washington's wrath four years ago by pulling Spanish troops out of Iraq immediately after coming to power in a surprise election win. To make up for the withdrawal, Zapatero strengthened Spain's NATO deployment in Afghanistan, which -- unlike the Iraq invasion -- had been sanctioned by the UN's Security Council.

Now, NATO is urging all its members to strengthen their commitment to Afghanistan to ensure that the biggest operation in the alliance's history, encompassing 43,000 soldiers, does not fail. Spain already has 742 military personnel stationed in the country. In order to be able to hand over security to Afghan forces, NATO planned to deploy 70 training units to instruct local police and military. So far, however, fewer than 50 training units are operating, among which are two Spanish ones with 26 men each.

At the upcoming meeting, Zapatero will find it next to impossible to resist calls to increase his country's troop contingent. In Bucharest, NATO members are expected to agree a strategic plan for the region until 2012. France's president Nicolas Sarkozy, meanwhile, has already turned heads in the alliance with his offer to deploy 1,000 French solders to relieve American units scheduled to depart.

Like Germany, Spain has consistently refused to send soldiers to more dangerous southern Afghanistan, where the Taliban is strongest and fighting at its most intense. Madrid's defense ministry has argued that its troops should stay in the west, where, it says, there are enough problems that need to be addressed.

Only last Tuesday did a parliamentary committee, in charge until a new legislative period starts in Madrid on April 1, decide to send an additional four aircraft with 36 military staff. Their task will be to provide aerial reconnaissance, cutting the number of ground patrols -- which are most vulnerable to rebel attack -- that are needed. To ensure that the formation of a new government, which is expected to be formed on April 8, does not delay the deployment, the soldiers were already sent to Afghanistan two weeks ago, after the old council of ministers gave its approval.

This is the second time Spain has ramped up its forces in Afghanistan. Yet, defense experts in Madrid believe a complete rethink of their country's mission is urgently needed, once NATO decides on its mid-term strategy. Among the proposals are calls to work more closely with the civilian population in Afghanistan so that locals can clearly see the good done by the international forces and are no longer tempted to support the rebels.

Spanish troops already have had some success in the Badghis province, where they have been helping Afghan security forces protect Spanish NGOs. In the region, the Spanish Agency for International Cooperation is building roads and hospitals and connecting homes to electricity, drinking water and sewers.

Overall the Spanish government in 2006 promised to spend €150 million ($236 million) on its Afghan operations over five years.