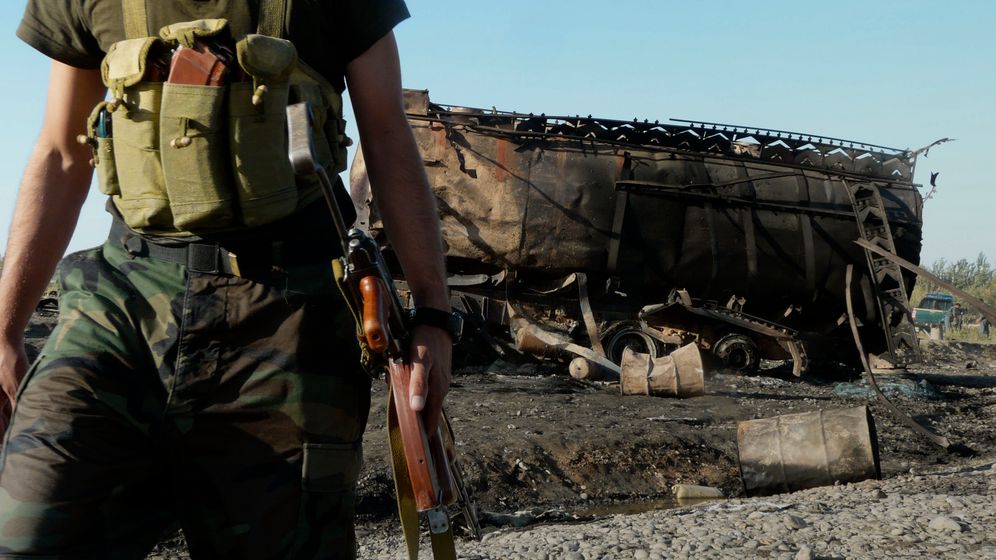 It was still the early hours of the morning back in Germany when three top ISAF officers in Kabul and Mazar-e-Sharif met via video conference at around 9 a.m. on Sept. 4. Brigadier General Jörg Vollmer, commander of all German troops in Afghanistan, was in the north of the country. He was joined from the headquarters in Kabul by Rear Admiral Gregory Smith, the communications director for ISAF commander General Stanley McChrystal and his intelligence chief in Afghanistan, Major General Mike Flynn. The topic for discussion was the air strike near Kunduz that had been called in by German Colonel Georg Klein just seven hours earlier.

The group was alarmed. The Arab news channel Al-Jazeera was reporting on the deaths of many civilians and the trio wanted to discuss how to proceed. The transcript indicates just how tense the meeting was. The questions were brief, the answers likewise. Each man knew how much outrage any mistake by NATO would provoke. That is why McChrystal's communications director was also present. Vollmer reported briefly: "Cannot rule out that some civilians were also not (sic) involved." The other two soldiers ordered him to get more information, as quickly as possible.

Mike Flynn had the last word at the end of the conference. The US officer made it clear what was expected of Vollmer, what the Germans had to do from NATO's point of view. "The most important thing is for local official to refute CIVCAS (civilian casualties)," he said dryly. It was clear to the experienced soldier now that the situation would certainly "escalate" following the dropping of two bombs southwest of Kunduz. He was, therefore, offering Vollmer every assistance from the headquarters to help with damage control.

The classified transcript of that morning meeting of Sept. 4 and the two subsequent conferences that day, when viewed together with the internal Bundeswehr documents, give a new and worrying glimpse of the day that followed the deadly air strike near Kunduz. SPIEGEL has seen the transcripts and documents, which give the impression that in dealing with the incident the Germans and also the NATO officials were more concerned with their own reputations than in working out what really happened.

Immediately after that morning video conference Brigadier General Vollmer sought talks with top Afghan officials. He wanted to find out what they thought about the air strike. First he spoke to the police chief and the governor of Kunduz, then with the district managers from Chahar Dara and Aliabad. The men were pleased about the air strike against the insurgents -- so much so that the governor even handed over a gift. No word about civilian victims. So far, so good.

According to the files, Vollmer then picked up the phone at 10:50 a.m. He wanted to look for himself into the claims on Al-Jazeera that civilians had also been harmed. He reached a general in the Afghan army. They spoke for 10 minutes, the general expressed his thanks for the attack -- but Vollmer was no longer so pleased. The Afghan general told him that, according to his information, "eight to 10 civilians were burned."

It didn't take long to arrange another video conference, this one at 1 p.m. This time NATO lawyers were also present. Vollmer was under pressure. The German was able to report that investigators were at the scene of the bombing, and local officials seemed greatly pleased. He had other news too, though: 12 patients were lying in the hospital. He only mentioned civilian victims at the very end. They could not be "ruled out categorically."

The tone became sharper. McChrystal's men were impatient. They were not at all pleased that Colonel Klein, the man who called in the attack, was not present. They wanted to know where the head of the Provincial Reconstruction Team in Kunduz was: "Where is the PRT Comd?" They were told Klein was in Kunduz to discuss the incident with the Afghan side. "H(e) is answering a lot of questions about the investigations," the German brigadier general said. What was the scope and nature of the contact with the enemy, he was asked. "Very short," he replied -- something that provoked astonishment among the ISAF representatives. Contact with the enemy was a central precondition for an air strike, and Vollmer was fully aware of that. The ISAF rules are very clear here.

The situation was serious. Once again communications were addressed. "Are you comfortable with the resources that you have WRT (with regard to) press relations/IO?" Vollmer was asked. "We have the people we need," he replied. But two things could be of use. "We should be viewed as positive from an Afghan perspective," he suggested. And contradictions had to be quickly explained. His regional commando was already working on "radio reports" in order to form an information offensive.

"We are also tracking the media," came the response from Kabul. And in addition they would "release a bland statement regretting loss of life especially that sufficient care and attention was given to presence of civilians."

It was of no use. In Germany there has long been doubt that this was the case and the criticism in Afghanistan has also grown louder.

At 4:30 p.m. NATO Commander Stanley McChrystal arranged a third video conference. Vollmer had to appear again. This time he was joined by the German General Egon Ramms. McChrystal was furious. He had just tightened up the rules for air strikes in the Afghanistan conflict. Bombs should only be dropped in the cases of acute danger to ISAF soldiers, in order to create the necessary trust in the foreign troops. The Kunduz air strike did not fit into this picture at all.

Brigadier General Vollmer now had a few new details: He said that 56 Taliban insurgents had died, as well as some civilians. Eleven men and a 10-year-old child lay wounded in the hospital. His team had not discovered any bodies at the scene but had found "some body parts."

General Ramms added that the attack was causing "a lot of turmoil in Europe," and that journalists had already been "attacking" Germany's defense minister back in Berlin. His gave his own reasoning right after. "Not all answer(s) were intelligently delivered" -- a clear barb against then-Defense Minister Franz Josef Jung and his ministry.

But McChrystal had very little interest in the German tumult. His clear preference was to bring clarity to the issue at first rather than try to obfuscate. And he made that clear to the Germans.

He issued Ramms and Vollmer a terse "guidance." "Freely admit what we don't know and say we are investigating," he ordered the Germans. He assumed the first assessement that there had been no civilian victims had been incorrect. There was no way one could have made that determination from the air. The angered ISAF chief said he was "deeply disappointed." The first statements from the Germans had been "foolishness." He also said he had doubts that the rules of engagement had been followed and asked why soldiers were first sent to the scene three hours after the first accusations in the media of civilian casualties.

According to the documents, Vollmer said the Germans "will investigate." At the time, he said, he had "no proper answer as to why it took so long."

'Do Not Forward to Third Parties'

Vollmer also faces other questions. Among the stranger aspects of the day were the e-mails that he received from a German lieutenant colonel at the base in Kunduz.

The team leader of the first NATO investigative commission, Paddy Teakle of Britain, worked on the lieutenant's computer at the German base and used it to send his highly confidential ("NATO/ISAF SECRET") appraisals to his boss, McChrystal, in Kabul. These messages weren't kept hidden for long from Vollmer and the German military command back in Potsdam, Germany.

It didn't take more than a few clicks for the German lieutenant colonel to copy the researcher's documents and forward them by e-mail. "For the general's personal information," he added, "the HQ colleagues work on my computer." Vollmer then immediately forwarded the messages to Potsdam.

Vollmer appeared to recognize the explosiveness of the passages, which reported the first errors made by the German officers, as well as the dubious circumstances under which they were forwarded to him by his officers.

His e-mails to Potsdam included, in all caps, the instruction: "DO NOT FORWARD TO THIRD PARTIES."