Mike Flynn, 57, the former director of the Defense Intelligence Agency (DIA), has served as a foreign policy advisor to Donald Trump since the autumn of 2015. For a time, Flynn had been considered as a possible vice presidential candidate for Trump before the announcement Friday that Indiana Governor Mike Pence would be made his Republican Party running mate.

SPIEGEL: General, we are here to say goodbye.

SPIEGEL: Donald Trump announced that if he wins the election, he will not continue trans-Atlantic relations in their current form. He has threatened to withdraw the United States from NATO.

Flynn: This is where I think the world has misread Donald Trump. He has no intention to step away without examining all relationships that we have. His intent is to relook at the way we are organized globally, where the US is sort of expected to be a global leader, but relook at these alliances and these charters that we are under to make sure that they are still viable for the 21st century. It doesn't mean that President Trump comes into office and NATO goes away. But I would say that NATO as a political alliance does need to be relooked at in terms of everything -- resourcing, capabilities.

SPIEGEL: Now you are challenging NATO after all.

Flynn: NATO was formed post-World War II. We're a little bit more than a half-century old. Do we want NATO to go on for another half-century? I think that the answer is, sitting here today: I don't know. If I had to bet on it, I would say, yeah, we have to have these alliances going forward and see who's going to pay for them.

SPIEGEL: Germany obviously plays an important role in Trump's considerations. He addressed Germany specifically and demanded that the German government pay in the future for the security provided by the American troops stationed there -- otherwise they could be withdrawn.

Flynn: We have to look at the cost of resourcing the US military around the world. How is that cost incurred, and how is that cost paid for? I'll give you an example. The Chinese get over 40 percent of their oil from the Middle East through the Persian Gulf, but have you ever seen a Chinese aircraft carrier sitting inside the Persian Gulf? For at least 40 years, the United States of America has been guaranteeing Chinese energy supplies. Sitting here today, the US provides funds to, honest to God, 99 percent of the countries on the planet. We even give North Korea humanitarian aid. We give them food, and God knows what they do with it. They probably feed it to the crooks in the headquarters. This is not about an antagonistic relationship with Germany or NATO. This is about looking and examining what the needs are going forward for the 21st century and who is going pay for it.

SPIEGEL: In December, Trump cursed German Chancellor Angela Merkel, complaining that she was too soft in the refugee crisis. Is that not counterproductive for cooperation?

SPIEGEL: Beside the factual questions, he was very tough in his language.

Flynn: I think all of Europe has been too soft on the refugee crisis.

SPIEGEL: But he offended Merkel. Does that serve to strengthen alliances?

Flynn: If she was offended by it, she was offended by it. That's the business. But the point was the really incredibly poor decisions when it comes to allowing this unbelievable, unprecedented refugee crisis that's going on in Europe. Why are these people rushing to the beauty and strength of Europe and to the United States and not rushing to their own capitals or the capitals of the Muslim world? We ought to be pushing back. We ought to be putting people back on these boats and putting them back into the places where they came from and telling these leaders in the Arab world, "You have a responsibility as well." I don't think that Europe responded in a way that they should have responded, and I think that's what Mr. Trump was reacting to.

SPIEGEL: Can you explain Trump's fascination for strong leaders like Vladimir Putin or Saddam Hussein, whom he recently praised as an effective hunter of terrorists?

Flynn: He respects people who are selfish about their country. Putin is a guy who is very selfish about Russia and about the Russian federation, and he understands the history of his country. You can't say, "I don't like you." You've got to respect him. He's a world leader.

SPIEGEL: Is Putin a reliable partner for America?

Flynn: Putin will be a reliable partner for certain things for the United States, yes. Absolutely. We need to have a relationship from the top to the bottom, same with China.

SPIEGEL: Trump just urged Saudi Arabia and Japan to become nuclear powers as well. With comments like that, is he not encouraging a dangerous nuclear arms race?

Flynn: The threat of nuclear warfare is very, very low. Trump is no fool, and he sees the world as a globalized world. In the conversation we're having right now, we're talking about historical aspects of regions of the world, so sort of world history. It's not that he needs a lesson in world history, but it's very important that you understand the history of Europe, the history of Africa, the history of the Middle East. What are the trends that we could expect to see in the next few years, like the next 10 to 50? Will there be another major war? Will there be a war between China and the United States? We talked a lot about that, and we talked about sort of what were the "What Ifs?" What are the potentials, and what are the things you need to be prepared for when you step into office?

Flynn: I found it funny. I mean, the guy is smoking cigarettes while they're launching missiles. Trump probably laughed about it, like I did.

Flynn: His No. 1 priority is the US economy, but I would say foreign policy and national security are in the top, probably, two if not three topics.

SPIEGEL: His foreign policy speeches have sounded vague and in some parts even contradictory. Would you agree that there is no solid foreign policy program right now?

SPIEGEL: Either way, he is demanding in his speeches that other countries take care of their own problems.

Flynn: And I think that's right -- that the United States should not have to intervene in every single problem around the world. The voters of this country are reacting in a very big, broad way to Mr. Trump. They are frustrated by lousy decisions made by both George W. Bush and Barack Obama. Look at the mess we have.

SPIEGEL: Are you speaking about the Iraq war?

Flynn: We're speaking about three incredibly stupid decisions. The first one was the invasion in Iraq. They said there was a nuclear weapons thing, but we were actually responding to the attack of 9/11. All of a sudden, somebody threw in this other, like, "Hey, maybe we can use this as an excuse."

SPIEGEL: That was Bush's decision. What about Obama?

Flynn: Obama's decision to leave, to not sustain the victory that resulted after eight years of fighting, from 2003 to 2011 in Iraq, was another incredibly stupid decision. It was totally based on politics, not based on any notion of national security. It's a nightmare for our national security. And then you have the Libya intervention.

SPIEGEL: You're speaking about the decision by NATO to overthrow Libyan dictator Muammar Gadhafi in the fall of 2011.

SPIEGEL: Trump would not repeat those kinds of mistakes?

Flynn: He would avoid those stupid decisions. When you look back, history is not going to be kind to these last 16 years.

SPIEGEL: For a long time, conservatives have pushed for the export of democracy and human rights. Will that come to an end if Trump becomes president?

Flynn: Yes, because it's wrong. The United States acted under a misinterpretation of a concept that we wanted to implement the system of democracy all around the world.

SPIEGEL: After the harsh words about Muslims, many view Mr. Trump as being racist and an enemy of freedom of religion.

Flynn: The wording was sort of wrong and I would not have said it the way he said it. But I also would not try to be politically correct either. There must be a ban for individuals who espouse this notion of radical Islamism, period.

SPIEGEL: Why is Trump so harsh in his choice of words?

Flynn: Trump is a fighter. Imagine a boxing match. You go into that fight bigger than you are. And he learned a lot in the last months. The quotes you are talking about are months old. Remember the box fight: You start as a southpaw, you go back to fighting as a right-handed fighter.

SPIEGEL: How does Donald Trump react when you criticize him?

Flynn: He's a great listener, and he's a good challenger. He doesn't come across as a person who thinks he knows it all. In fact, he once told me he has had lot of things to learn.

SPIEGEL: He also says he has a very good brain or that he learned all about foreign policy during his time as a businessman. How is it possible to advise someone like that?

Flynn: I know Donald Trump as a very adaptive person. In my nearly three and a half decades of being in the military, I've had maybe one, maybe two guys that I've worked for that were that adaptive in combat. He adapts to the great challenges, with his own sort of street smarts and his instincts.

SPIEGEL: Do these personal traits make a good president?

Flynn: Definitely a better one than all the (former) governors who were in politics all their life. Trump realized that you had to drive a stake through the heart of this establishment and that millions of Americans do not feel represented by this sort of clique in Washington. Now he is on top of many polls, everything else he can learn when he has reached the White House.

SPIEGEL: So we will hear him using a more presidential tone?

Flynn: He will never give up his style, his way to target his enemies. The Americans are fed up with the bullshit they heard for many years. They want the truth, they want to believe what their leaders are saying again. Trump is such an underdog, a fighter -- a man who rebels against the establishment, against all kinds of resistance. That is what Americans love. 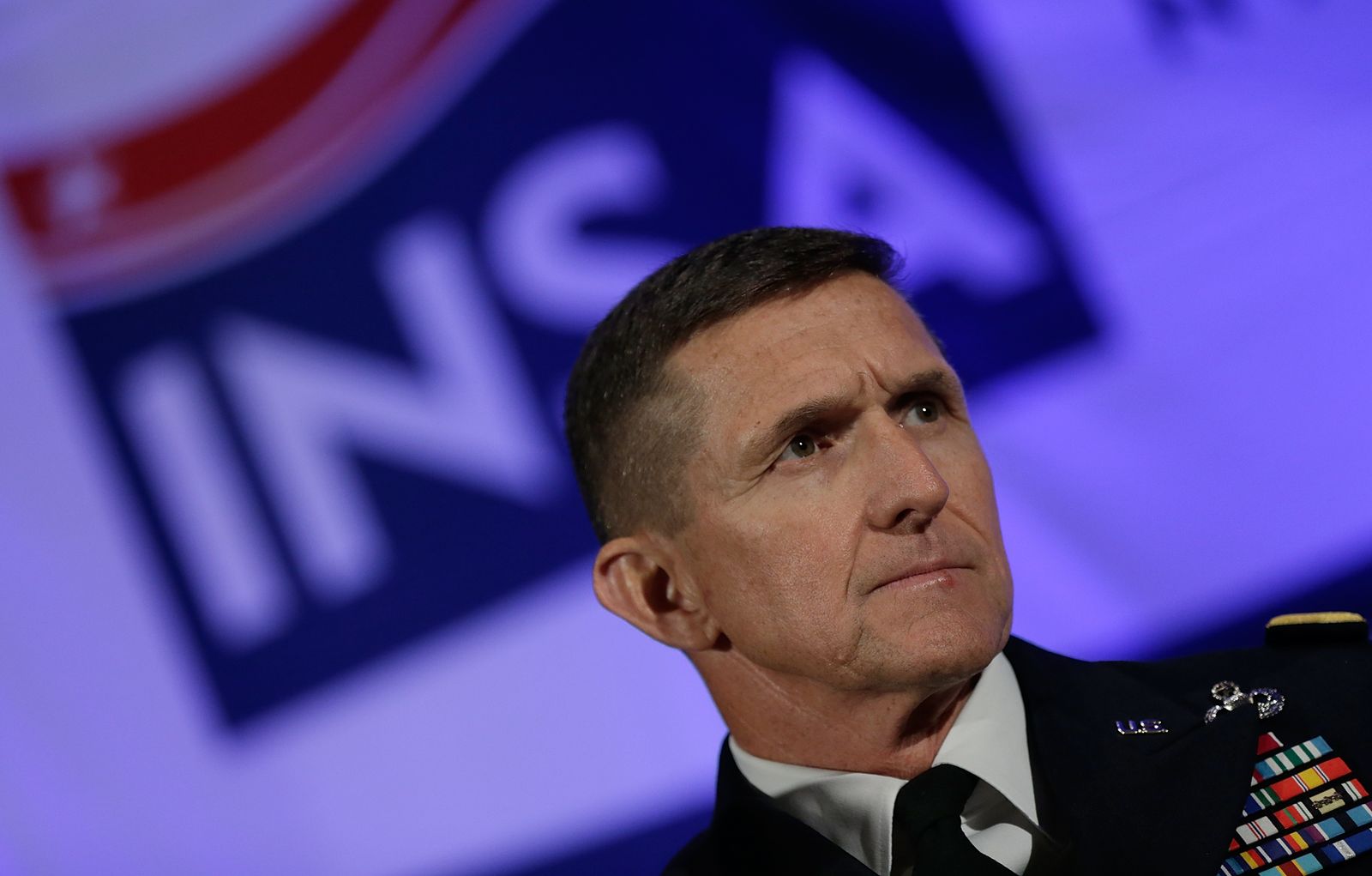