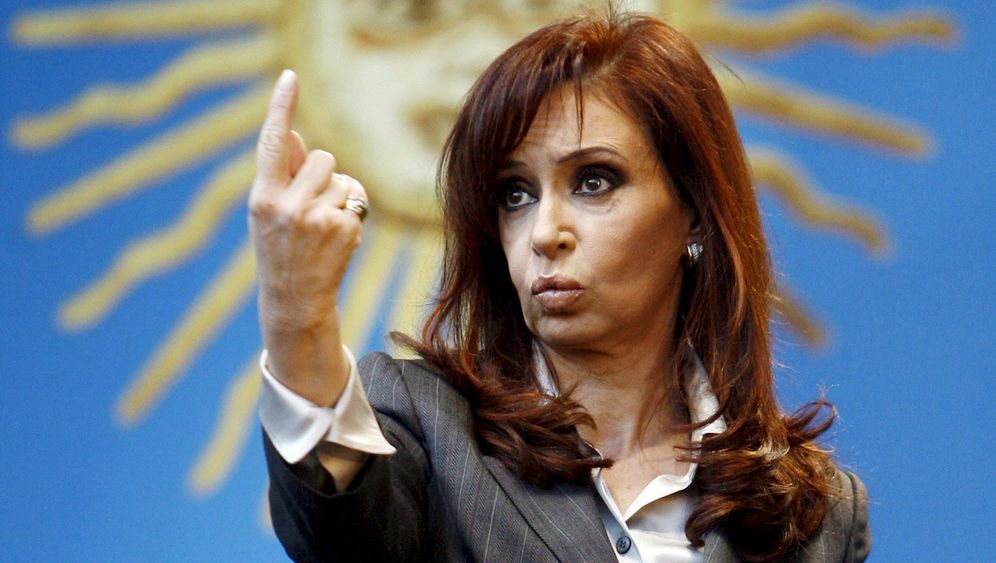 Photo Gallery: 'Of Course We Still Have Many Disparities'

SPIEGEL: President Fernández de Kirchner, on Tuesday evening, you will attend the opening of the Frankfurt Book Fair. Argentina is the guest country this year. Which book are you reading at the moment?

Fernández de Kirchner: A historical book about a hero from our independence movement from the Spanish colonial bosses 200 years ago. It is so good that my Venezuelan colleague Hugo Chávez nabbed it from me. I read it in New York, where I took part in the Millennium Summit of the United Nations.

SPIEGEL: At the book fair you will be accompanied by a group of exciting young authors, but you seem to have a more strained relationship with journalists. You have just presented a controversial media law to the parliament. Do you want to keep the press on a short leash?

Fernández de Kirchner: No, absolutely not. We advised all parties in advance and extensively. We also oriented ourselves based on US legislation.

SPIEGEL: But you want to centrally regulate the distribution of paper for newspapers. In that way, the government is going to be able to put pressure onto them.

Fernández de Kirchner: La Nacion and Clarín, the two biggest newspaper companies, have a monopoly on paper production. The state only holds a minority stake. The two can access the paper at special prices while the others are forced to pay more. That is unfair competition!

SPIEGEL: Is that not just a pretext to discipline Argentina's biggest newspaper, Clarín? It has been criticising your government for years.

Fernández de Kirchner: All governments had a problem with Clarín. A former associate of the paper has admitted that they always support a president in the first few years to take advantage of them. In the last two years they punish them -- in the hope that a new president will take office and the cycle will be repeated. Now, for the first time it has come to light that Clarín has downplayed the crimes of the military dictatorship.

SPIEGEL: You and your husband have tried to encourage a process of working through the crimes committed under the military dictatorship. What experiences did you have then?

Fernández de Kirchner: My husband and I were arrested several times. We weren't allowed to work as lawyers in the civil service, but, luckily, we could work as independent attorneys. We were in a sort of internal exile, far from the capital, in Patagonia. One time a bomb was planted in my office, but it didn't explode. Another time my office was set on fire. I was never tortured. We were lucky. But we always felt an obligation to the victims of the dictatorship.

SPIEGEL: Were you a member of the left-wing guerrilla movement, the Montoneros?

Fernández de Kirchner: No. When I was a student, I belonged to the Peronist Youth, but I never fought with a weapon in my hand.

SPIEGEL: One of the biggest idols in Argentina is Che Guevara. He tried to bring the Cuban revolution to the rest of the world and was murdered in Bolivia in 1968. What does he mean to you?

Fernández de Kirchner: For those who stand up for their ideals, things often end tragically. Che is a man who fought unconditionally for his ideas and died for them. We will send an exact copy of his diaries, which has been made available to us by the Bolivian government, to the book fair in Frankfurt. The original lies in a vault in the central bank in Bolivia.

Fernández de Kirchner: I probably identify much more with Evita because I am a woman and a Peronista. But you have to see it in the historical context, to understand that she caused her own revolution inside the Peronist revolution. At that time, in the 1940s, women weren't allowed to vote in Argentina, and artists like her were viewed as prostitutes. She was an illegitimate child and poor. Actually, she would have been destined to be shut out of society, but instead she remains worshipped to this day around the world.

SPIEGEL: Che and Evita are tragic heroes, and tragedy appears to be a constant in Argentine history. Until the middle of the last century, Argentina was one of the richest countries in the world. Then a descent began that has already lasted for decades.

Fernández de Kirchner: That is the lasting result of the military coup of March 24, 1976. The military destroyed our local industry with their neoliberal politics. What ruined us in the end was the coupling of our currency, the peso, with the US dollar in the 1990s.

SPIEGEL: Carlos Menem, a Peronist like you and your husband, was responsible for that.

Fernández de Kirchner: I don't have a "Peronometer," or a yardstick for how bound someone is to the ideals of Juan Domingo Perón. At any rate, he was elected president two times. In order to keep the exchange rate parity with the dollar, the state had to go further and further into debt. And, naturally, exports suffered. We weren't able to compete.

SPIEGEL: The Menem years culminated in the financial crash of 2001.

Fernández de Kirchner: When my husband, Néstor Kirchner, took over the government in 2003, debt amounted to 260 percent of gross domestic product, and there was a poverty rate of 50 percent. It was a catastrophe. Of course, we still have many disparities, but since then we have made great strides in all areas. We have record reserves in the government coffers. Since 2003, we have had six years with about 8.5 percent economic growth, the highest growth rate in the last 200 years.

'I Maintain Very Good Relations with all Governments'

SPIEGEL: Hasn't the high inflation eaten away at wage increases and limited the purchasing power of the middle class?

Fernández de Kirchner: We have more consumption than ever before. Our shopping centers are flourishing. And wages have risen higher than inflation.

SPIEGEL: According to information from private economic institutes, you have cooked those numbers. Inflation is actually twice as high, at 25 to 30 percent.

SPIEGEL: Haven't you arbitrarily changed the basket of goods to suit your purposes?

Fernández de Kirchner: The method of measurement was always being changed. We have now eliminated absurd categories for comparison and simplified them, so that they now play a real role in the life of an industrial worker.

SPIEGEL: Argentina is still considered a pariah in the financial world. Will you pay your creditors back so you can get access to credit again?

Fernández de Kirchner: In 2005 my husband began rescheduling the debt. We have strictly adhered to all the maturities despite the onset of the financial crisis.

SPIEGEL: But you have still not reached an agreement with the international creditors, the Paris Club.

Fernández de Kirchner: In New York, I met with an important group of investors. They are offering money at a sensible price. We are slowly starting to enjoy greater trust.

SPIEGEL: What did you do to cushion the impact of the crisis?

Fernández de Kirchner: We invested in infrastructure and incentives for small- and medium-sized businesses so that they didn't have to fire any personnel.

SPIEGEL: Could troubled European countries like Greece learn anything from Argentina?

Fernández de Kirchner: I certainly think so. When Greece crashed, it still had a better rating with the agencies than we had, even though it had long been dragged down by its problems. Ratings are of no use in helping assess the real substance of an economy. The measures have to be tuned to the necessities of the individual country. The medicine which helps one country can prove life-threatening to another.

SPIEGEL: Argentina is booming largely because of its agricultural exports. Why have you started to fight with the very farmers who helped underpin Argentina's growth?

Fernández de Kirchner: The agricultural businesses have never had things as good as they are now.

SPIEGEL: Argentina has only fallen behind when it comes to its most famous export, steaks. Now even its small neighbor Uruguay exports more meat.

Fernández de Kirchner: That is due to the dreadful drought in the past year, which meant that hundreds of thousands of cattle had to be culled. But now global market prices are so low that it is more profitable for us to consume our meat at home. We are definitely not turning vegetarian.

SPIEGEL: In truth you ought to thank Venezuela's leader, Hugo Chávez. He helped Argentina twice out of a credit crunch by buying up Argentine bonds for $5 billion (€3.6 billion). Are you financially dependent on Chávez?

Fernández de Kirchner: He stepped in at a time when nobody else was willing to help us. But we don't depend on him and he doesn't depend on us. I maintain very good relations with all governments in the world, especially within South America.

SPIEGEL: Did Chávez support you financially in your electoral campaign? It is said that Argentine civil servants took a suitcase full of money back from Venezuela ...

Fernández de Kirchner: President Chávez came to visit one day later. Why did the president not transport the money in his own airplane, which would not be checked? In an election, €800,000 is a laughable sum. It almost looks like a satire manipulated from the outside by vested interests.

SPIEGEL: While Argentina and Brazil were once rivals on an equal footing, Brazil now overshadows your country. Are you jealous of Lula's success?

Fernández de Kirchner: You cannot compare Argentina and Brazil. We have 40 million inhabitants, they have almost 200 million. We maintain a close and solid cooperation with Brazil within Mercosur. The relations between the two countries were never better. This development can only be measured if you consider that the provinces neighboring Brazil do not have a gas network because Argentina's rulers used to fear a war with Brazil.

SPIEGEL: The rivalry between the two nations continues in football, however. But the two countries both failed at the 2010 World Cup. Diego Maradona stepped down as trainer of the national team. Are you going to offer him a post as a minister for sport?

Fernández de Kirchner: No, he doesn't need that. While other icons are controversial, we remain unanimous regarding Diego. He is and remains a great joy to the Argentine people.