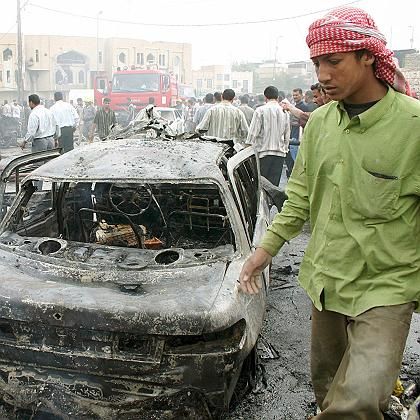 A terror attack on a busy market in Karbala: "We must build a state that is in the position to defend democracy."

SPIEGEL: Mr. Allawi, Gen. David Petraeus,the commander of US forces in Iraq, will present his report to Congress this week. He apparently wants to suggest reducing troop levels that had been increased as part of the surge strategy starting next year. What is your assessment of the six-month US military offensive in Iraq?

Allawi: Gen. Petraeus visited me in my house right after it started. I asked him: What will you do when this offensive is over? Will you go home? He answered: Thats your responsibility. We are coming to prepare the field for you politicians. It was never the goal of this increase in troops to solve all the security problems for good. The goal was to create the conditions that would enable Iraqs political classes to start down the path of reconciliation. Without that there will never be any security.

SPIEGEL: What have you -- the politicians -- done with this short breathing space?

Allawi: Today, we are further than ever from national reconciliation. The ethnic-confessional cleansings continue, especially in central Iraq and Baghdad. The exodus and expulsions of Iraqis has taken on a dimension not seen since the founding of modern Iraq in the 1920s. De-Baathification has become a settling of scores with political opponents. There is also absolutely no solution in sight for how to deal with former members of the disbanded army. Hundreds of thousands of soldiers sit at home, deprived and disenfranchised, without a salary.

SPIEGEL: On the other hand, the US military can point to some progress, for example, in the Sunni Anbar province, where US President George Bush visited last week, or in Baghdad.

Allawi: Thats true. But we have to be frank precisely because the United States has made such sacrifices and because Petraeus and Ambassador Ryan Crocker have shown goodwill. We now have a number of crises to deal with that go far beyond pure security aspects. It wasnt only the supporters of Saddams regime that have been neutralized politically. The same goes for Sunnis pushing for reconciliation, for secularists like us, for those that listen to the preacher Muqtada al-Sadr, for members of the Fadhila Party based in southern Iraq -- that is, even for millions of religious Shiites. All of these groups have been disenfranchised politically and some are now attacking each other.

SPIEGEL: You demand that Prime Minister Nouri al-Maliki resign. But what would happen then?

Allawi: A new government must be formed that bundles all political forces to ensure a process of national reconciliation. In order to get things started, there must be a general amnesty with exceptions only for terrorists and serious criminals. An Iraqi government can only provide security if the state institutions take away the influence of the various militias and disband them. This would mean for the army alone that up to 40 percent of the current number of troops would need to be replaced by soldiers and officers from the old army and new recruits. Proper tools are needed to ensure security. That means a police force and an army that is loyal to the state -- not to a specific confessional group or a clan.

SPIEGEL: What role would the US military have in this scenario?

Allawi: First of all, they would have to safeguard such a transfer. Then, little by little, the United Nations, the G8 states, the Gulf Cooperation Council and the Organization of the Islamic Conference must begin to take over responsibility for security in Iraq. Ive been pushing for such an internationalization for a long time. Ive sent letters to the American president, the British prime minister, as well as the leaders of Japan and Germany.

SPIEGEL: How did the Germans respond?

Allawi: We know that Berlin is interested in playing a role in the stabilization of Iraq. During my tenure as prime minister, Germany trained Iraqi security forces and we received German equipment -- Heckler & Koch pistols for the police, paid for by the United Arab Emirates. Germany was also very helpful in expanding NATOs role in Iraq.

SPIEGEL: Very few countries will be willing to send troops to Iraq while others are pulling theirs out. What could they do differently?

Allawi: The involvement of other nations will greatly influence the behavior of our neighbors, for example Iran. It makes a big difference to Tehrans policy on Iraq if its only facing the United States or if it's also facing Germany, Japan or large Islamic countries.

SPIEGEL: How do you explain that the Bush administration continues to back Maliki despite growing criticism? 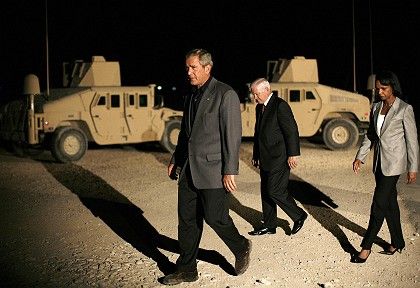 US President George W. Bush (left) walks in front of Humvees with Defense Secretary Robert Gates and Secretary of State Condoleezza Rice: "We are coming to prepare the field for you politicians."

Allawi: Youll have to ask President Bush that. Who can dispute that the current government is weak and deeply troubled? Although I personally have nothing against Nouri al-Maliki, the sectarian strife that has spread across our land will leave lasting damage.

SPIEGEL: Would you like to replace Nouri al-Maliki yourself at the helm of the government?

Allawi: I am not prepared to serve a sectarian regime. If we can achieve a broad, clear mandate for national unity, where it doesnt matter if someone is Kurd or Arab, Sunni or Shiite, then I am ready to take any post.

SPIEGEL: What could you then promise your secular supporters?

Allawi: We must build a state that is in the position to defend democracy. And the institutions of this state must have a place for all Iraqis: in the schools, in the universities, in the business sector. But a new government will first have to rule with state of emergency laws -- laws, mind you, that all groups agree to -- not like the current anti-terror laws that are being used to persecute disfavored parties.

SPIEGEL: People accuse you of having had contact with the Sunni countries neighboring Iraq and of having been motivated by their agendas.

Allawi: I speak regularly with the Turkish leadership -- which is a decisive factor in the region. I also meet with Saudi Arabias King Abdullah, Egypts President (Hosni) Mubarak, and with Gulf state leaders. Its all about preserving the regional balance, that is, to offset Irans growing influence.

SPIEGEL: How is it that you are seen throughout the Middle East as a man working for western intelligence services?

Allawi: Im not. When Saddam was in power, a few countries helped us. Egypt let us set up a radio station, Turkey allowed us access to Kurdistan. The president of the Iraqi National Congress, Ahmad Chalabi, has admitted to receiving money from the CIA. But the Sunnis, secularists like us, the Kurds -- we were all part of the National Congress. Only one thing is prohibited these days in Iraq: to speak with President Mubarak or the kings of Jordan and Saudi Arabia. Mention the word Arabism and you will be accused of being an intelligence agent.