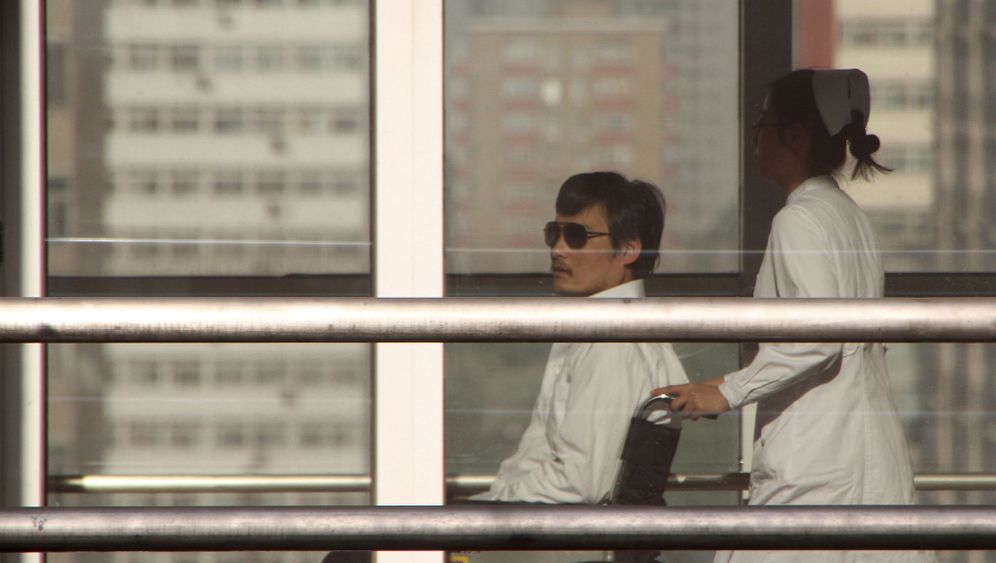 Photo Gallery: 'I Want to Get Out of China'

The plea for America's help and protection resonated in Chinese through room 2172 during a hearing at the United States Congress in Washington. Last Thursday, a telephone conversation with Chinese dissident Chen Guangcheng, 40, who was soliciting support for his wish to be allowed to leave China, was piped into the room through loudspeakers.

The incident had simultaneously put two world powers into an awkward situation: China, because it highlighted, once again, the miserable state of the rule of law in the country; and the United States, because it had put its trust in the assurances of the Beijing leadership and entrusted Chen to the goodwill of the Chinese authorities. The conflict, which was supposed to be resolved quietly, threatens to harm US President Barack Obama and adversely affect Washington's already strained relationship with China.

After 18 months of house arrest, the blind dissident Chen managed to escape from his guards in Shandong province. With the help of friends, he fled several hundred kilometers to Beijing, where he took refuge in the US Embassy. He left the embassy again six days later -- at his own request, as the Americans claim -- and was taken to a Beijing hospital. US diplomats stated that they had received assurances from the Chinese that Chen would be allowed to study in China without fear of government persecution.

The Republicans are now accusing the Obama administration of having agreed too readily to such a vague promise. Mitt Romney, Obama's presumptive challenger in the upcoming presidential election, called it a "day of shame."

On Friday, a way out of the diplomatic crisis seemed to emerge after all, one that would allow diplomats in Beijing and Washington to save face. If Chen wished to study abroad, a spokesman for the Chinese Foreign Ministry in Beijing said, he could do so, "like any other Chinese citizen."

However, this announcement did not translate into the quick departure Chen now longs for. First he will probably have to return home, where his tormentors are waiting for him, because Chinese citizens are normally required to apply for a passport at their official place of residence.

New York University has now offered him a fellowship. On Sunday, US Vice President Joe Biden said that the US was prepared to grant Chen a visa "right away" so he could take up the fellowship. "I think his future is in America," Biden told the US broadcaster NBC.

The following interview with SPIEGEL was conducted by phone last Thursday, during Chen's stay in the hospital. The connection was interrupted several times during the conversation.

SPIEGEL: Mr. Chen, how are you feeling?

Chen: I'm lying in bed, and I don't feel well at all. Also, I'm afraid that this telephone connection could be interrupted at any time.

SPIEGEL: Are you being treated well?

SPIEGEL: How's your foot? Which one is injured, and how did it happen?

Chen: The right foot. It's in a cast. I broke it as I was climbing over a wall during my escape. They'll remove the cast in six to eight weeks.

SPIEGEL: Did you leave the US Embassy in Beijing voluntarily?

Chen: (pauses for a long moment and sighs) Yes, I left the embassy voluntarily, but I was being threatened at the time.

SPIEGEL: Were you being threatened, or your family?

Chen: No, it wasn't me that was being threatened, but my family.

SPIEGEL: The Chinese leadership allegedly announced that it would send your wife and two children back to your home province of Shandong if you refused to leave the US Embassy. Is that true?

SPIEGEL: And in Shandong your family would have been greeted by precisely those officials and hired thugs who had treated them so poorly in the first place.

SPIEGEL: Do you want to leave China?

Chen: Yes, I want to get out of China as quickly as possible. With my entire family.

SPIEGEL: You spoke with US Secretary of State Hillary Clinton by telephone on the way to the hospital. Did she give you any guarantees?

Chen: All she said was that the Chinese government would guarantee my civil rights. But in China there are no guarantees for civil rights.

SPIEGEL: For a long time, the Chinese government stood passively by while local authorities placed you under house arrest and mistreated you. Do you believe that this government will guarantee your safety in the future?

Chen: In my opinion, it isn't a question of believing or not believing. I prefer to stick to the facts. Since I've been here in the hospital, I've hardly been able to make or receive calls with my mobile phone. My friends cannot visit me. Also, I haven't been able to find out how my mother is doing. There are so many uncertainties for me. And then my wife told me about all the things that had happened to her at home.

SPIEGEL: Are you afraid that the local authorities will take revenge on you?

SPIEGEL: You are the first prominent Chinese human rights activist who escaped from captivity and who will now -- allegedly -- be allowed to live in China as a free man. Do you see this as a sign of change, and of possible reforms?

Chen: But the problem is I'm not free.

SPIEGEL: Your friends haven't been allowed to visit you yet, and only your wife and your two children are with you in the hospital?

Chen: Yes, they're with me.

SPIEGEL: Are your wife and the children allowed to go outside?

SPIEGEL: Do you know how your other relatives are doing, including your nephew and your brother?

Chen: No. I don't know anything about their situation.

SPIEGEL: Can you tell us a little about how you were treated during your house arrest?

'They Tried to Make Life as Difficult as Possible for Us'

Chen: The guards forcibly prevented us from going outside, and they followed us everywhere. The people from the local state security broke into our house and beat my wife and me. They carried everything out of the house, even thermometers and flashlights. These were really unimportant items, but they took everything along. All the books, and the pictures on the walls -- they robbed us of everything. They didn't take the TV set, but they used pliers to destroy the plug, so that we were unable to get any reception. They tried to make life as difficult as possible for us.

SPIEGEL: It sounds like your escape from captivity was nothing short of a miracle.

SPIEGEL: How did you manage to escape unnoticed?

Chen: It's a long story. I crawled out of the house.

SPIEGEL: During your daring escape, you were picked up by helpers and taken to Beijing. Some were later interrogated or arrested.

Chen: I'm very worried about them. This clearly shows that all the talk about freedom is just empty words.

SPIEGEL: Did you discuss the situation of the people who helped you with the Americans?

Chen: Yes. They assured me that they would raise this issue with the Chinese side.

SPIEGEL: What do you know about the agreements on your protection that the Americans made with the Chinese government?

Chen: According to them, the Chinese side guaranteed my civil rights, and I was allowed to leave the embassy unchallenged.

SPIEGEL: But under this agreement the Americans cannot monitor what happens to your supporters?

Chen: No, apparently not. Some of the others are still being tortured.

SPIEGEL: Were you told why you were illegally held and mistreated in the last few years?

Chen: Now they're saying that my civil rights were violated, and that the local government broke laws and regulations. That, at least, is what the government told US Assistant Secretary of State Kurt Campbell.

SPIEGEL: Did you receive any written assurances from the United States or your own government?

SPIEGEL: You were assured that you would be allowed to study at a Chinese university. Was that only a verbal commitment?

SPIEGEL: In what city were you offered the opportunity to study?

Chen: They listed seven possible universities. I hadn't decided yet. I'm allowed to choose between Tianjin and … But let's forget that! It's pointless.

SPIEGEL: So you're no longer interested in attending a university in China?

SPIEGEL: When you spoke with US Secretary of State Hillary Clinton on the phone, you were reportedly so overjoyed that you said: "I want to kiss you." That, at least, is what Western media quoted American diplomats as saying.

Chen: They must have heard incorrectly. I didn't say I wanted to kiss Clinton. All I said, in English, was: "I want to see you." And that is what I want. I want to meet her.

SPIEGEL: Did you believe that Ms. Clinton would visit you?

Chen: She was already in Beijing when I was still in the embassy. But she didn't come to see me. That surprised me very much.

SPIEGEL: Do you still hope that the Americans will make additional commitments regarding your protection?

Chen: Of course I hope so.

SPIEGEL: But they haven't materialized yet?

Chen: I just got a call from them. They said that someone would come to see me later.

SPIEGEL: How long will you have to stay in the hospital?

SPIEGEL: Do you believe that your country will ever transform itself into a state based on the rule of law?

Chen: Yes, I think so. But it will still take massive efforts by many, many people to achieve that goal.

Correction: An earlier version of this interview incorrectly contained the sentence "A guard helped me." It should have read: "Heaven helped me."

8 Bilder Photo Gallery: 'I Want to Get Out of China' 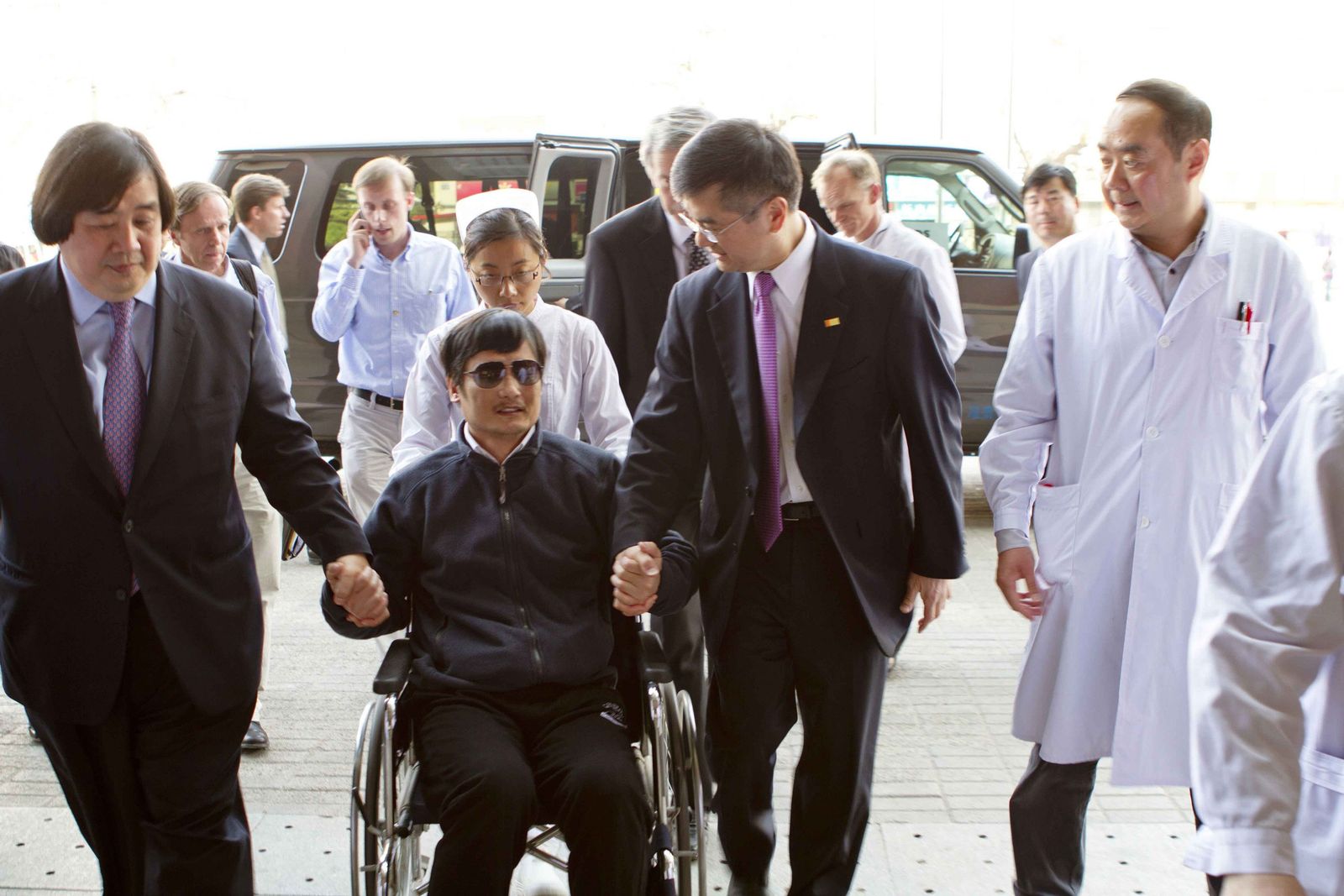 With the help of friends, he fled several hundred kilometers to Beijing, where he took refuge in the US Embassy.