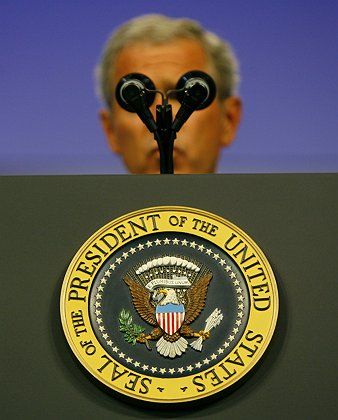 SPIEGEL: Mr. Ambassador, you worked closely with the president and you shared his hawkish views on Iraq. But your new book is fiercely critical of George W. Bush. Why?

Bolton: His foreign policy is in free fall. The president is turning against his own best judgment and instincts under the influence of Secretary (of State Condoleeza) Rice. She is the dominant voice, indeed, almost the only voice on foreign policy in this administration.

SPIEGEL: The popular reading of her looks a bit different. She is presumed to be weak and not particularly efficient.

Bolton: No. Rice is channeling the views of the liberal career bureaucrats in the State Department. The president is focusing all his attention on Iraq and, by doing so, has allowed the secretary to become captured by the State Department. He is not adequately supervising her. It is a mistake.

SPIEGEL: Could it be that your pique really comes from the fact that the president doesn't seem to be listening to neoconservatives like you anymore?

Bolton: The vice president (Vice President Dick Cheney) is still there. But the idea that somehow the neocons were so powerful is a myth -- I mean, it was five or six people, for God sakes. I am not a neoconservative. I am pro-American.

SPIEGEL: You have said that the new moderate foreign policy currently being followed by Bush compromises the security of the United States.

Bolton: Well, I think so. North Korea is going to get away with keeping its nuclear weapons. I think the (National Intelligence Estimate) sends Iran a signal they can do whatever they want

SPIEGEL: You are talking about the recent report by US intelligence services that Iran stopped its nuclear weapons program in 2003

Bolton: Yes. For 12 hours after the NIE announcement, there was not a word from Iran. They were sitting there in Teheran saying: What devious trick are the Americans playing on us now? They couldnt believe it and finally declared victory.

SPIEGEL: In the past, you argued for a military intervention in Iran. Do you still consider that an option?

SPIEGEL: And where is the president? Is he merely a puppet?

SPIEGEL: What do you see as the alternative -- bombing Pyongyang?

Bolton: Im not running around the world looking for ways to create hostilities. The solution to North Korea is the reunification of the Korean Peninsula. China could influence the North; it supplies 80 to 90 percent of North Koreas energy. The United States have to put pressure on China in order for China to pressure North Korea.

SPIEGEL: Do you have any second thoughts about the American engagement in Iraq?

Bolton: It was right to overthrow Saddam Hussein. It was the regime itself that was a threat. I think in hindsight, what I would have done is turn authority back over to Iraqis much more quickly and say: Your country, you figure out how to run it."

SPIEGEL: Would you say the world is now a safer place than before the Iraq war?

Bolton: Yes. There is now no possibility that Iraq is going to have weapons of mass destruction. We had the ancillary strategic victory when (Libyan leader) Moammar Gadhafi gave up his nuclear weapons program as well. When he looked at Saddam, he concluded -- incorrectly -- that he might be next.

SPIEGEL: You dont seem to doubt the go-it-alone approach of the United States although anti-Americanism is rising across the world. Doesn't such a negative view of America weaken US power?

SPIEGEL: What kind of foreign policy will the next president pursue?

Bolton: If you get a President (Hillary) Clinton, you might well find, just as after Vietnam, that there is a retraction from Iraq and of American influence in the world. And in a couple of years the Europeans will be complaining about that too. See how long American troops last in Europe under an administration that thinks it is time for America to come home.

SPIEGEL: Is that a threat?

SPIEGEL: Mr. Ambassador, thank very much for taking the time to speak with us.