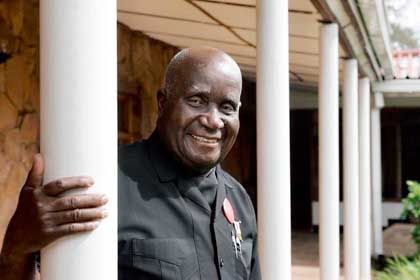 SPIEGEL: Mr. President, when Ghana gained its independence from Great Britain 50 years ago, it was the first country in sub-Saharan Africa to become independent. What do you remember when you think back to those days?

Kaunda: It was a fantastic time. I was 23 years old, really not much older than a child, but Ghana's first president Kwama Nkrumah, invited me to Accra for the festivities. All of Africa was celebrating, and it was truly incredible. People were singing and dancing in the streets. We wanted to reshape the world, and we wanted to do everything differently.

SPIEGEL: The spark quickly jumped from Ghana to other countries. Almost all African nations gained their independence in the next decade, including Zambia in 1964.

Kaunda: What happened in Ghana inspired us all. It was a signal. We looked back on such horrible times -- the slave trade, colonialism. The Apartheid regime was still in power in South Africa. Suddenly a door was opening up, and through it we saw freedom. We all wanted it to happen as quickly as possible. No one wanted to wait any longer.

Kaunda: It's difficult to say. We were young and impetuous, we had no time to waste, and we were also afraid that our colonial rulers would suddenly change their minds about the whole thing. But you're right; we were on our own from one day to the next. After decades of being told what to do, we suddenly had to take care of ourselves. Besides, we also had to learn how to interact with one another. When I became Zambia's first president in 1964, my Christian faith was very helpful to me.

SPIEGEL: You come from a devout family. Your mother was a teacher and your father a minister.

Kaunda: Love God the creator with all of your heart, your soul, your spirit and your energy. That was how I was raised and that was how I tried to act as president. Most of all, I tried to shape the country according to the commandment, "Thou shalt love thy neighbor as thyself."

SPIEGEL: Not exactly an easy task in a region where tribal conflicts still shape daily life.

Kaunda: We must overcome the scourge of tribalism. That was precisely why faith was so important. Seventy-three African tribes live in Zambia, as well as a few white tribes: an English tribe, a German tribe, immigrants who later came to this region. But what unites us is that we are all people, and as such we should live together in peace.

SPIEGEL: Do you still remember your dreams?

Kaunda: Education, education, education. Before that, people had almost no opportunities to learn something. We had all of 100 university graduates and 300 doctors in the country. Three hundred doctors for several million people! Can you imagine that? We wanted to change all of that. We wanted to build roads, hospitals and schools. And we were successful to some extent. When we left the government in 1991, one of our achievements was that 12,000 Zambians had obtained university degrees. Many were sent abroad to study, both to Eastern European countries and to the West.

SPIEGEL: But many of them never returned, instead looking for jobs abroad.

Kaunda: Yes, that is Africa's fate. People learn something and disappear. The entire continent suffers from this emigration. We must find ways to make life here more attractive. We can't afford to be losing our best people to Europe or the United States.

SPIEGEL: But your Christian socialism, which included nationalization of the economy, was considered a failure.

Kaunda: It was our bad luck that copper prices were so low at the time. It's a completely different situation today, with prices for raw materials shooting up all over the world. Besides, the World Bank put us under enormous pressure, constantly urging us to privatize. But our government was actually on the right track. You can see what's happening now. Our copper mines are being sold off -- to the Indians and the Chinese, but also to Canadians and Americans. We are giving up control over our riches, and it's a disgrace. The rest of the country has also gone downhill.

SPIEGEL: This seems to be an African problem. What's causing it?

Kaunda: There are several reasons: poor government in many countries, and then the civil wars. And don't forget the legacy of colonialism. Besides, millions of Africans were once dragged off to Europe and America as slaves. We started at zero, and that's only 50 years ago, not exactly a long time. We need more time and more patience.

SPIEGEL: It isn't that long ago that Asia was just as badly off as Africa. In fact, the Asians had even more factors working against them: fewer natural resources and overpopulation. Nevertheless, most Asians are better off than Africans today.

Kaunda: We have copper, gold, platinum and iron ore. The Lord has truly blessed the land with riches. But it is also puzzling to me why we Africans have such a difficult time managing this wealth. Sometimes I think that there is a curse on all these natural resources. Greed, jealousy and wars are consuming the continent. 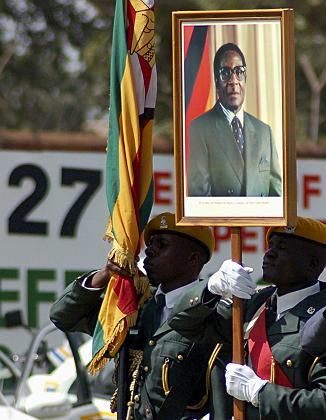 Soldiers holding a portrait of Zimbabwe President Robert Mugabe at the country's 27th anniversary of independence on Wednesday.

SPIEGEL: Aren't Africans themselves responsible for most of the catastrophes, such as the situation in Zimbabwe?

Kaunda: (Zimbabwean President) Robert Mugabe and I were good friends and close allies in the struggle for Africa's independence. This man spent a long time fighting for his country's freedom. He suffered and was in prison for many years.

SPIEGEL: What happened to him that could explain why is currently ruining his country?

Kaunda: One shouldn't ignore history when judging Mugabe today. I remember those days well. We were a country located on a front. There was apartheid in South Africa and what is now Namibia, the Portuguese were in power in Angola and Mozambique until the mid-70s, in Rhodesia Ian Douglas Smith had declared independence unilaterally and was running the country with a small white minority. But Mugabe and the others were only released after 10 years in prison.

SPIEGEL: Did that make him bitter?

Kaunda: Isn't that understandable? When he was released from prison and, a few years later, became Zimbabwe's first black president, (then British Prime Minister) Margaret Thatcher said to him: Do as you wish, but don't touch the land issue for at least 10 years. Don't throw out the ethnic British farmers. He was president, and much of the country was still in the hands of those who had locked him up for years. But he kept his promise.

Kaunda: The conservative administrations of Thatcher and later John Major kept coming back to the question of land ownership, and they tried to find a mutually acceptable solution. They wanted to see more white farmers sell their land voluntarily. (Current British Prime Minister) Tony Blair's socialists, of all people, were suddenly no longer interested. Mugabe was forced to take action.

SPIEGEL: Mugabe had to throw all white settlers out of the country?

Kaunda: Ian Douglas Smith, who treated him so poorly, still lives peacefully in Zimbabwe. We shouldn't demonize Mugabe. He went through hell.

SPIEGEL: The country has been in ruins since the land reform was put in place. It has the world's highest rate of inflation, and 80 percent of the people are unemployed.

Kaunda: Some big mistakes were certainly made. But not just by Mugabe. I hope that the horrible events in Zimbabwe will be a lesson to us all, because South Africa and Namibia could face similar developments if we don't watch out. Much of the land in those countries also remains in the hands of the whites, and they also have a long, painful history of colonialism and apartheid.

SPIEGEL: What could these lessons be?

Kaunda: It cannot be that a few whites sit on huge estates while the majority of the people starve. The blacks in these countries have suffered long enough. We did not come into power in order to preserve the land ownership of a small group of white owners of large estates. Nevertheless, South African Presidents Nelson Mandela and Thabo Mbeki were very considerate toward this minority. A minority, mind you, that is responsible for most of the country's problems. It shouldn't take advantage of this friendly relationship, otherwise the same thing that happened in Zimbabwe could happen there.

SPIEGEL: White farmers who have been driven from Zimbabwe had settled and become quite successful in Zambia, of all places.

SPIEGEL: You would not have allowed them into the country?

SPIEGEL: But they are good farmers. Zambia benefits from them.

Kaunda: We don't need outside help. We do quite well on our own.

SPIEGEL: But Africa has enormous problems.

Kaunda: Africa has huge problems. AIDS. Wars. Add to that the problem of widespread poverty. And then there is the debt burden. We have so many debts to pay that we can no longer build schools and hospitals.

Kaunda: No, no. I am 82, but I am still fighting AIDS and tuberculosis with my foundation. Africa has learned how to handle major challenges. Africa can fight. I am a very optimistic person. We will master our future.