SPIEGEL: Ms. Lagarde, the global economy is slowing, markets are volatile and banks have all but ceased lending each other money. Does the situation remind you of 2008 just before the investment bank Lehman Brothers collapsed?

Lagarde: Each moment in history is different from previous situations and it's wrong to try to draw comparisons. At the International Monetary Fund, we see that there has been, particularly over the summer, a clear crisis of confidence that has seriously aggravated the situation. Measures need to be taken to ensure that this vicious circle is broken.

Lagarde: It is a combination of slow growth coming out of the financial crisis and heavy sovereign debt. Both fuel serious concerns about the capital and the strength of banks, notably when they hold significant volumes of sovereign bonds. Should banks experience further difficulties, further countries will be stricken. We have to break this cycle.

SPIEGEL: What should be done?

Lagarde: When we look at the European situation, there has to be fiscal consolidation qualified by growth-intensive measures. In addition, there has to be increased recapitalization of the banks. Clearly, the two go together. The sovereign debt issue weighs on the confidence that market players have in European banks.

SPIEGEL: Don't you think that your warning that €200 billion ($285 billion) might be missing in the balance sheets of European banks aggravates the situation of those banks?

Lagarde: In the course of our work on global financial stability, we are looking at the situation in Europe. We will publish the results of this work in a couple of weeks. More generally, we do see a need for recapitalization of European banks so they are strong enough to withstand the risks coming from sovereign borrowers and from weak growth. This is key to cutting the chains of contagion.

SPIEGEL: Is the world on the brink of a renewed recession?

SPIEGEL: At the moment, however, exactly the opposite would appear to be happening. Many governments have introduced austerity packages in order to make up for the vast expenditures made during the crisis. Is that wrong?

Lagarde: I wouldn't pass general judgement on that because it's going to be country-specific. For some countries, the path is fine and should continue as is. For others, some of the measures that have been taken are so strong, given the current deficit situation, that they can accommodate some relaxation -- especially if the economy weakens further, and provided there is a clear medium-term consolidation path.

SPIEGEL: Do you consider Germany to be one of those countries which could do more to stimulate the global economy?

Lagarde: In the course of our annual country checks, our experts recently visited Germany. Their conclusion was that, under the circumstances, the fiscal consolidation path adopted by Berlin was perfectly fine.

Lagarde: Of course these things always depend on circumstances. Given Germany's heavy reliance on exports, if demand weakens so much that it really changes the equilibrium, then it would need to be revisited.

Lagarde: Domestic demand is good for both the German economy and for the other economies surrounding Germany. I do think that domestic demand in Germany has improved since the time when I floated this idea as finance minister in France.

SPIEGEL: Given the economic climate, do you not think it dangerous when countries pass laws mandating a balanced budget, as France is considering?

Lagarde: It's clearly a signal to market players. It shows investors the seriousness of the government's commitment to the principle of balanced finances. The general intention behind it is good.

SPIEGEL: Would you like to see the US implement such a "debt brake" rule?

Lagarde: Each country must find the best way to signal to the markets that they are serious about public finances. The IMF has a lot of experience and we would be very happy to give a hand to those countries that actually are in the process of implementing a debt brake.

SPIEGEL: Do you think the austerity measures recently agreed to in the US go far enough?

Lagarde: Which ones do you mean?

SPIEGEL: The commitment, after weeks of disagreement about the debt ceiling, to cut federal expenditures by at least $2.4 trillion over the next 10 years.

Lagarde: Such long-term commitments are a good principle because they credibly signal an intention to reduce the deficit and consolidate public finances on a more stable course, for example in health care spending. It can indicate that a country will reduce the deficit in the medium term and yet still have enough room in the short term to put in place measures that will actually stimulate growth and help create employment.

SPIEGEL: Does the US need a new stimulus package?

Lagarde: We are in a situation of slowed growth and we have a confidence issue that culminated this summer with the downgrading of the US from its AAA status. As long as the US puts in place a credible medium-term adjustment plan, there is probably space at the moment to contain the short-term adjustment and take some of those growth-inducing measures.

SPIEGEL: You suggest fighting the effects of a debt crisis with more debt?

Lagarde: That's not how I see it. In a world that is so economically interwoven, where the actions of industrial countries have direct influence on emerging economies, one can't be stubborn when the situation changes. We didn't change our minds about the dangers of too much debt, but over the current state of the world economy.

SPIEGEL: The effects of too much debt can be seen right now in the euro zone, where the European Central Bank had to buy up billions in government bonds. At the end of September, the European rescue fund, the European Financial Stability Facility (EFSF), will take over this task. Does it have enough money to do so?

Lagarde: The EFSF will now be flexible enough. It has been in a bit of a straitjacket. Now it has the option to buy on the secondary market in certain circumstances, to support the banks and provide guarantees. That is very welcome.

SPIEGEL: Europe's leaders have given EFSF head Klaus Regling a pile of tasks, but not more money. Will the allotted €440 billion be enough?

Lagarde: French President Nicolas Sarkozy and German Chancellor Angela Merkel and other euro leaders have said they will do what it takes. That would include increasing the EFSF if necessary, I suppose.

SPIEGEL: Does that include going as far as supporting Italy? Isn't the country far too big to be bailed out by other EU countries?

Lagarde: The European leaders have made very strong commitments concerning the euro currency and the euro zone. I think markets should appreciate the strength of those statements and the strength of their political commitment. There has also been a significant improvement in terms of fiscal consolidation and structural reforms in Italy.

SPIEGEL: Critics say that Greece has had enough help and should be kicked out of the euro zone. Do you think that's a good idea?

Lagarde: Number one, it's not for me to decide. Number two, I think that all the partners, whether in the European Commission, ECB or IMF or members of the euro zone, are determined to make this work and ensure that the Greek economy regains competitiveness and is properly restructured.

SPIEGEL: There are a growing number of stumbling blocks emerging in the euro zone. Finland has demanded guarantees from Greece before the bailout money flows, inspiring other countries to consider following suit. Doesn't that put the entire rescue mechanism in doubt?

Lagarde: My understanding is that the euro members are working on this and are working on the pattern that would actually respond to all euro-area members' expectations. In other words, not a tailor-made program that would fit Finland and nobody else. I am certain the euro-zone members are aware of their responsibilities and will find a solution.

SPIEGEL: In France, it is possible that there could be legal proceedings against you. You are accused of having abused your position as French finance minister by making sure that businessman Bernard Tapie received compensation from the French state in connection to a deal involving Adidas that went wrong. Will you resign from your job if you have to defend your actions in court?

Lagarde: This issue was actually contemplated at the time of my candidacy for the position. The IMF board concluded that that case was perfectly compatible with me continuing my job and carrying out all my duties.

SPIEGEL: If we may ask one more question on this topic: Is it true that you acted on instructions from President Nicolas Sarkozy?

Lagarde: If I had to answer that question, I think I would answer it in court. I think that would be more appropriate than discussing it with SPIEGEL.

SPIEGEL: There is an unwritten rule that the top job at the IMF is always occupied by a European, and in return the Americans get to appoint the head of the World Bank. Given the world's shifting center of gravity, do you believe that you are perhaps the last European who will hold this position?

Lagarde: I hope not -- that would exclude many talented people from the competition -- but, you know, it's not for me to say. I'm not sitting here as a European, and I've tried to disengage from thinking as a European or thinking as a French national. The moment you walk into this organization, you become a servant of a global institution.

SPIEGEL: Ms. Lagarde, we thank you for this interview. 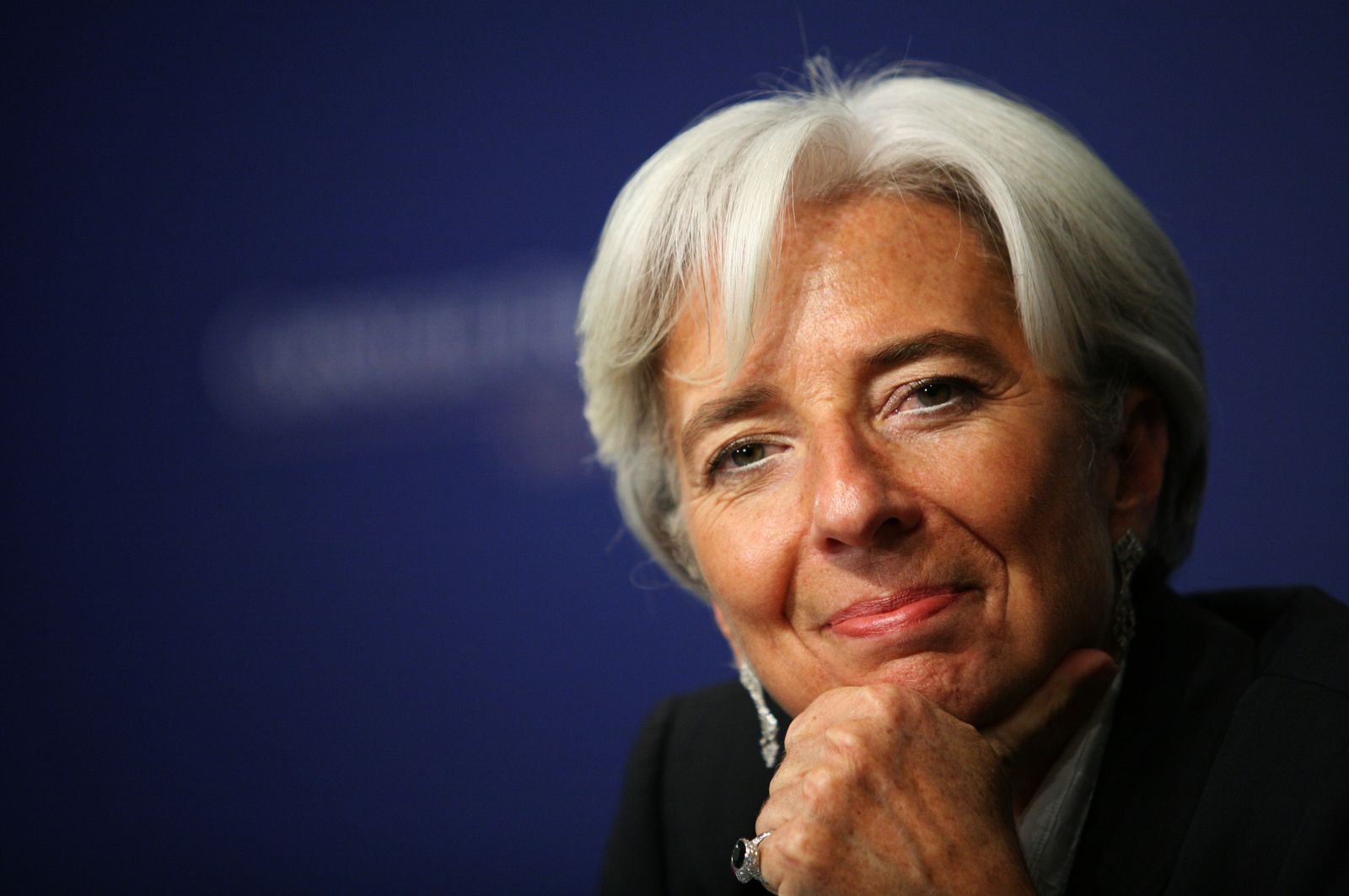 IMF Managing Director Christine Lagarde: "There has been a clear crisis of confidence that has seriously aggravated the situation."