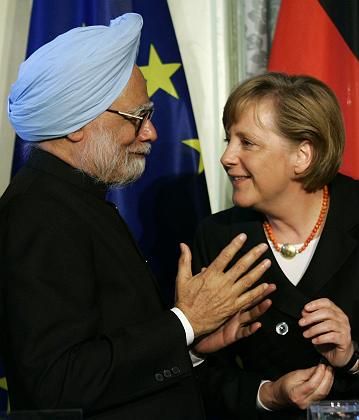 SPIEGEL: Dr. Singh, German Chancellor Angela Merkel will be in New Delhi this week. Her entourage, which includes some of Germany's top executives, scientists and politicians, will fill two Airbus planes. The scale of the visit is a bit surprising considering that Germany and India have no historical links. Why are the two countries suddenly so important for each other?

Singh: Who says we are not historically linked? Our first trade contacts date back to 1505, when ships financed by the Fugger family from Augsburg landed in Goa. Your great poet Goethe was enormously inspired by Sanskrit texts.

SPIEGEL: But that doesn't help explain why Chancellor Merkel is undertaking her longest overseas trip to date. Where precisely do the two countries' mutual interests lie?

Singh: It is no secret that trade and investment have been growing rapidly. And then there has always been close scientific and technological cooperation between our two countries. Most importantly, however, Germany and India are both democracies and believe in human rights. This makes the relations far easier and smoother than with many other countries. We also cooperate with Germany on global issues through the European Union and the G-8 as well as other international forums. We have also, through the G-4 framework, presented our joint candidature for permanent membership in the UN Security Council. Seldom do two leading countries enjoy such a harmonious relationship.

SPIEGEL: Nevertheless, there is great disharmony within your own country over the planned nuclear deal with the United States, which will allow international monitoring of India's civil nuclear power stations in exchange for technological know-how. Your own coalition partners, the Left Front, vehemently oppose the Indian-US nuclear deal. Is it all but dead?

Singh: I take your point, but I am still of the opinion that we will reach a consensus soon. The Indian-US nuclear deal will considerably improve and consolidate India's energy supply. And what is good for India is good for the world.

SPIEGEL: Many countries would beg to differ. India, a nuclear power, has consistently refused to sign the Nuclear Non-Proliferation Treaty. In a phone call to US President George W. Bush last year, Chancellor Merkel herself criticized the Indian-US nuclear deal.

Singh: Chancellor Merkel, who has herself campaigned intensively for renewable energy since the last G-8 summit, has no reason to worry. Yes, we do have an ambitious domestic nuclear power program and want to raise the proportion of nuclear power in the overall energy mix. But it is also well established that we want to look at all available fuel options and forms of sustainable and environment-friendly energy. International cooperation can play an important role in that endeavor. Take the German-Indian Energy Forum, for example. German companies are already supplying equipment for the Indian power sector, and we are already working together on energy efficiency, clean coal technology and renewables. For the business delegation accompanying the chancellor to India, the trip will not be in vain.

SPIEGEL: But will the failure of the Indian-US nuclear deal reduce India's chances of a seat on the United Nations Security Council?

Singh: Where do you see the connection?

Singh: One should look at the advantages of expanding the Security Council: Germany and India could both play a very constructive role. Reform of the Security Council, we believe, is essential for enhancing both the legitimacy and effectiveness of the UN. The UN must reflect the contemporary realities of the 21st century.

SPIEGEL: But then India would have to take a more decisive stance on sensitive issues like Burma. At the moment, one has the impression that India has been evading the question. Or has New Delhi been tolerating Burma's military junta only because Burma, as an oil and gas supplier, is crucial to India's growing energy needs?

Singh: Like Germany and the EU, India too wants peace and stability in South Asia and we are working together to bring that about. But please remember that in such crises the ability to keep a sense of proportion is often far more effective than shrill condemnation and sanctions.

SPIEGEL: For several years, German universities have been trying to woo Indian students. But Indians still seem to prefer countries like the United States and Canada. What are the Germans doing wrong?

Singh: Germany could consider providing incentives such as scholarships and employment opportunities, and, most importantly, put in place a visa regime which makes it easier to enter the country. Germany is a leader in higher education, particularly in the area of technology. We would welcome more Indian students benefiting from Germany's strengths, but we would also like to see more German scholars and academics in India.