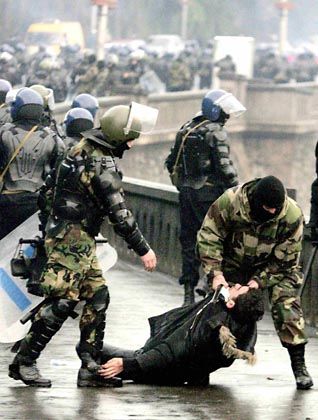 Riots broke out in Tbilisi in November, 2007, after Irakli Okruashvili was arrested and prevented from opposing his onetime friend, President Mikhail Saakashvili.

SPIEGEL: Mr. Okruashvili, the Georgian authorities have leveled serious charges against you. What is your response?

Okruashvili: I worked with Mikhail Saakashvili for more than six years. I was his right-hand man. He never accused me of anything during that time. But the minute I switched to the opposition, I was suddenly called a criminal. It was a political maneuver.

SPIEGEL: Do you consider the investigation against you to be purely politically motivated?

Okruashvili: As long as Saakashvili is president, I will be unable to prove my innocence in Georgia. Seen in this light, there is a positive aspect to my arrest in Germany. It will be much easier for me to refute the charges here. Although I must admit that I didn't exactly expect this sort of welcome -- being thrown into jail in Berlin.

SPIEGEL: What happens if the Germans deport you to Georgia?

Okruashvili: I hope to be granted asylum. Deportation -- that would be a death sentence for me.

SPIEGEL: You would be killed?

Okruashvili: Saakashvili would do everything within his power to destroy me, first as a politician and then as a person. All government authorities, including the police, the military and the courts, are controlled by those in power.

SPIEGEL: You were once part of this system yourself. You were one of Saakashvili's closest associates.

Okruashvili: I made mistakes. My supporters and I failed to prevent a main like Saakashvili from acquiring absolute power. I should have criticized him earlier on. But I think that our society will not allow anyone to establish a dictatorship again in the future. Saakashvili will fail.

SPIEGEL: You have even compared the president to Adolf Hitler. You weren't serious, were you?

Okruashvili: This comparison was a logical conclusion, because the president used violence against protesters.

SPIEGEL: You were arrested and then, surprisingly, withdrew your accusations against him. When you were interviewed, you gave the impression that you were drugged.

Okruashvili: Our prison in Georgia is a very different place from this prison here in Berlin. The conditions there are inhuman. I was intimidated and demoralized. There was no physical coercion, using narcotics, for example, but there was psychological torture. The president wanted to shut me up.

SPIEGEL: How did they put you under pressure?

Okruashvili: With nightly interrogations that lasted for hours. And there were people who came to my cell and were after my blood. Saakashvili also sent the current defense minister to see me in prison. He explained that I would spend at least 25 years behind bars.

SPIEGEL: But then you were released and allowed to leave the country for medical treatment. How fair will the election on Jan. 5 be?

Okruashvili: Saakashvili will use all legal and illegal means possible to remain in power. People are being threatened to prevent them from collaborating with the opposition. At the same time, he is terrorizing the business world, which prevents the opposition from gaining any funding.

SPIEGEL: Why is it so difficult to bring democracy to many of the countries that were once part of the Soviet Union?

Okruashvili: We lived in a totalitarian system for more than 70 years, and our views are still under its influence. Many heads of state in the former Soviet republics believe that they must have total power.

SPIEGEL: What are your expectations of the West?

Okruashvili: I would like to see more control and more criticism coming from Europe. The constant expressions of friendship for former President Eduard Shevardnadze, who made some contribution to German unity, were counterproductive for our country. The West didn't see our real situation, and we were blinded by the compliments coming from the Europeans and Americans.

SPIEGEL: What do you think Georgia's prospects are after the Jan. 5 election?

Okruashvili: Saakashvili must resign his position. Georgian society can no longer be divided. I don't want to see our country's best minds leaving the country to try their luck abroad.