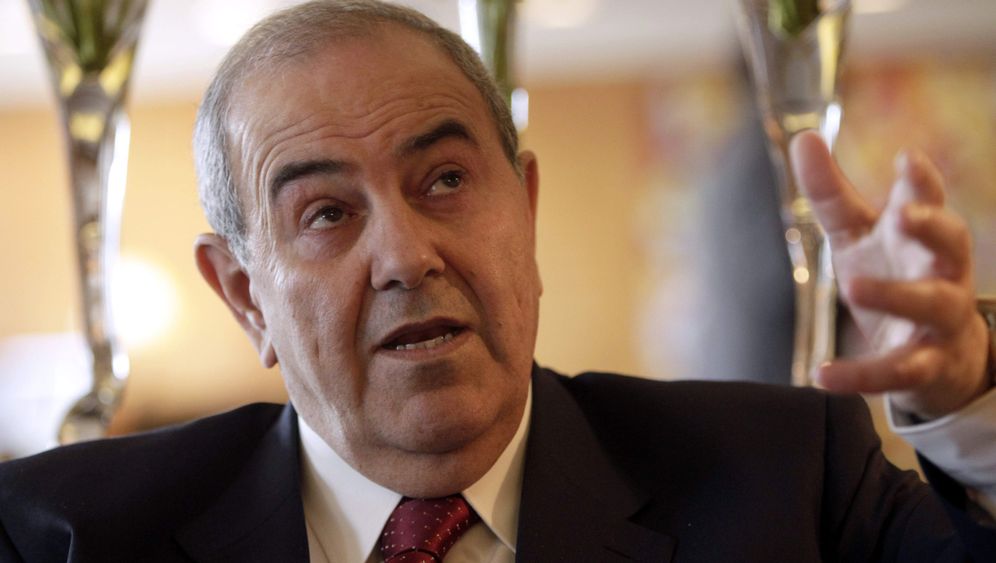 Three bodyguards are sitting in front of his hotel suite in Kuwait, their guns bulging from beneath their suits. It's Ramadan and the men are fasting. But Ayad Allawi isn't, and he asks for an espresso. Allawi doesn't even create the impression that he lives according to religious rites. And that's also one reason why, nearly six months after the Iraqi election, he still hasn't become prime minister. He is one of the few representatives of a secular and supra-denominational Iraq.

The son of a Shiite businessman, Allawi became a member of the Baath Party as a student, but fell out with Saddam Hussein in the 1970s and then worked with Western intelligence services in the effort to topple the dictator. In 2004, the United States installed him as the first prime minister in postwar Iraq. After a year of governing as interim prime minister, he failed to win a democratic election to remain in the office. But in March 2010, he led in the parliamentary elections, with a two-seat advantage. Despite almost six months of talks, however, he still hasn't managed to form a government.

Allawi is pessimistic about the region. He says that on the night before his interview with SPIEGEL, he conferred with Arab leaders until 1 a.m. With a growing number of conflicts in the region, he says, the situation has grown more serious than most there have ever experienced. "Early today," he explains, "one of the most experienced of us came in and asked: Has the next catrastrophe in the Middle East broken out yet?"

SPIEGEL: Dr. Allawi, you are a neurologist by profession. How would you describe Iraq's current state in medical terms?

Allawi: Critical. It could go either way. Everything depends on the doctors' management of the patient. If the management is good, Iraq can survive. If not, then God forbid.

SPIEGEL: So your best case prognosis would be

SPIEGEL: And the pessimistic one?

Allawi: Iraq continues on its downward slide and becomes a failed state. If that happens the Pandora's box will open again and all the violence will reappear.

Allawi: Yes. But a relapse now would be much more severe, because we do not have multinational forces anymore which could contain a civil war.

SPIEGEL: The combat deployment of the US troops officially ends this week. Will that help Iraq or does it take away the sick patient's life support?

SPIEGEL: The Iraqi military chief of staff, General Babakir Zebari, says that Iraq's army will not be fully ready before 2020 and that the Americans must stay.

Allawi: I agree with him. It may well take another 10 years.

SPIEGEL: Are the Americans leaving too early?

Allawi: They have to leave eventually. They have been in Iraq for seven years and we have not achieved anything ourselves. Who can guarantee that this would be different another seven years from now?

SPIEGEL: Does US President Barack Obama's administration neglect Iraq to the benefit of Afghanistan?

Allawi: You see what is happening in Afghanistan: It is a total failure. The problem here is not about America leaving Iraq and continuing its fight in Afghanistan. America has to rethink its strategy for the whole region from Central Asia to the Middle East. NATO will have to rethink its strategy, and so will Europe. The West's policy is wrong. Just look around: Somalia is a totally failed state. Yemen faces the most serious of challenges. Palestine? One step forward, three steps back. And somewhere down the line, Lebanon will be on the agenda. God help us when the United Nations Special Tribunal for Lebanon issues its verdicts in the murder case of former Prime Minister Rafik Hariri.

SPIEGEL: That is a very gloomy analysis -- and it does not provide much hope for peace in this region.

Allawi: I am not gloomy, I am only realistic. America is the last remaining superpower. We need to have good relations with Washington. But we also have to see the mistakes in the US strategy. We have excellent, professional soldiers in Iraq today but, and I am only quoting the chief of staff here, we do not have an army ready to shoulder its responsibilities. Similar comments come from the interior minister. And our police force is infiltrated by militias.

SPIEGEL: Saddam Hussein's former foreign minister, Tariq Aziz, who is now in prison, accuses America of leaving Iraq "to the wolves." Who does he mean by that?

Allawi: He means the predators that have been unleashed all over the Middle East, the lawless people and the terrorists who want to spill as much blood as possible on as many places as possible. The conflicts between Afghanistan, the Horn of Africa and the Maghreb are similar and interconnected in this respect.

SPIEGEL: The leaders of Israel, Egypt, Jordan and the Palestinians will soon start a new round of peace talks in Washington. Do you believe these talks have any chance?

Allawi: I am very skeptical. I do not think it will work. The environment is not right.

SPIEGEL: For the past two years, it seemed as though Iraq had tamed its predators. The al-Qaida terrorists appeared to have been decisively beaten.

Allawi: Yes, but the early warning signs that have accumulated over the past months, the increase in violence, the new wave of assassinations and suicide attacks, should not be read as something superficial and accidental. On one day alone we counted 13 attacks with dozens of people killed. This is a systematic development. The biggest mistake committed by the Iraqi government and the multinational forces was to let down the Sahwa forces -- the tribal movement which was so decisive in the fight against al-Qaida. They have not been integrated; they have been disenfranchised and pushed back into despair and poverty. This will have consequences. Violent groups are already mushrooming in the shadows of al-Qaida.

SPIEGEL: So, the successes of the past few years are highly endangered?

Allawi: Just look at what is happening in Afghanistan: All the pressure, all the bombs have not finished off the Taliban and al-Qaida. They have actually been strengthened beyond the country's borders itself into Pakistan. The overall strategy is wrong.

SPIEGEL: Your rival, Prime Minister Nouri al-Maliki, claims to have established a strong Iraq and to be a strong leader.

Allawi: He is not strong. How do you define strength? Commanding one square kilometer in the center of Baghdad?

SPIEGEL: You mean the Green Zone, the highly secure government and embassy compound by the Tigris.

Allawi: From Basra in the south to Mosul in the north, demonstrations are raging. Services (like electricity, water and trash collection) are almost on standstill. Even the Green Zone is being bombarded on a daily basis again. We have an army without airplanes and without tanks. What sort of strength is this?

'We Have a Constitutional Problem in Iraq'

SPIEGEL: Iraqis do not blame al-Maliki alone for this misery, however. They do blame politicians in general, yourself included. Some voters have risked their lives by participating in the elections, but even after nearly five months of negotiations, you haven't yet succeeded in forming a government.

Allawi: This is democracy. And because of the fact that electoral alliances are formed in Iraq even after the election, and the fact that al-Maliki's list succeeded in pushing for a recount of the votes, we lost three precious months of time.

SPIEGEL: America is now pushing for a power-sharing agreement between your list and al-Maliki's list and for important cabinet posts to be split between the two.

Allawi: It is not the Americans who are pushing. It was me who convinced the US and the United Nations to move forward through a devolution of power.

SPIEGEL: What does that mean? You will become prime minister and al-Maliki will be president? Or vice-versa?

SPIEGEL: But three years ago you told us that Iraq needs a strong leader. You said this country cannot even be governed otherwise.

Allawi: Yes, and I stand by this even today. But the results of the election were so close that we cannot practically adhere to this. We have not yet transitioned to democracy. Even in 2007 we thought that we had progressed further than we actually have today. We have reached a point now where nobody trusts anybody and where the future of the country and the entire region is at stake.

SPIEGEL: And at this critical point of time you decided to break off talks with al-Maliki because he called your group a "Sunni" one? Is this responsible behavior?

SPIEGEL: Why is the political class that returned from exile with the help of American tanks, yourself included, so extremely incapable of finding even minimal compromises?

Allawi: Because the political process we have witnessed over the past seven years has been deeply corrupted and riddled by terror and violence. This process has not grown from Iraqi sources. It was a process guarded, even guaranteed by America. After such a process, where should compromise and stability come from? We should have linked our Status of Forces Agreement with the US to political reform.

SPIEGEL: You made headlines when you recently met with the Shia firebrand and former militia leader Muqtada al-Sadr, a man whose supporters tried to kill you in December 2005 in Najaf.

Allawi: This meeting happened, almost accidentally, in Damascus. I have always been against militias and will never change this attitude. To tell you the truth, I found this guy very honest, straightforward and uncomplicated. We have known his family of learned men for generations, so I asked him: None of your relatives has ever advocated sectarianism -- how come you have become part of a sectarian set-up? He answered: I am full-heartedly against sectarianism. I am all for an Iraqi solution for our problems, not a Shiite one.

SPIEGEL: Some experts see his mysterious retreat as the real reason behind Iraq's improvement in 2008. He was considered by many Iraqis and Americans to be "the most dangerous man in Iraq."

Allawi: If this was the case then all of us are dangerous. This man has 40 seats in parliament and has a grassroots movement in this country.

SPIEGEL: Do you expect him to return to Iraq and to politics?

Allawi: He should. It would be good for Iraq and his own people.

SPIEGEL: Which foreign power currently wields the most influence in Iraqi politics?

SPIEGEL: Can you elaborate?

SPIEGEL: Why not? Many countries are currently worried about Iran because of its nuclear program.

Allawi: For me, Iran's influence is not positive. I am certainly not an advocate of Iranian policies. I am even sure that they have a red line and a veto on me. But I think the world should engage and talk with Iran and try to see and feel where the fears of Iran lie. The Iranians are logical people. We should try to convince them that proliferation does not serve their purpose in the end.

SPIEGEL: You travel from one Arab capital to the other, you know all the Arab leaders and you also know that they are arming themselves.

Allawi: Everybody is frightened. Every corner of the region is frightened. Even America is frightened, even Iran is frightened. We are heading towards a situation which almost compares to the Cuban crisis in 1962. There is an umbrella of fear spreading above us. Everybody should do his utmost to prevent tensions. I am calling for an international conference on the issue of proliferation.

SPIEGEL: Can Iraq live with a nuclear Iran?

Allawi: I don't think so.

SPIEGEL: Do you think that war will break out over Iran's nuclear program?

Allawi: It is a very high possibility. 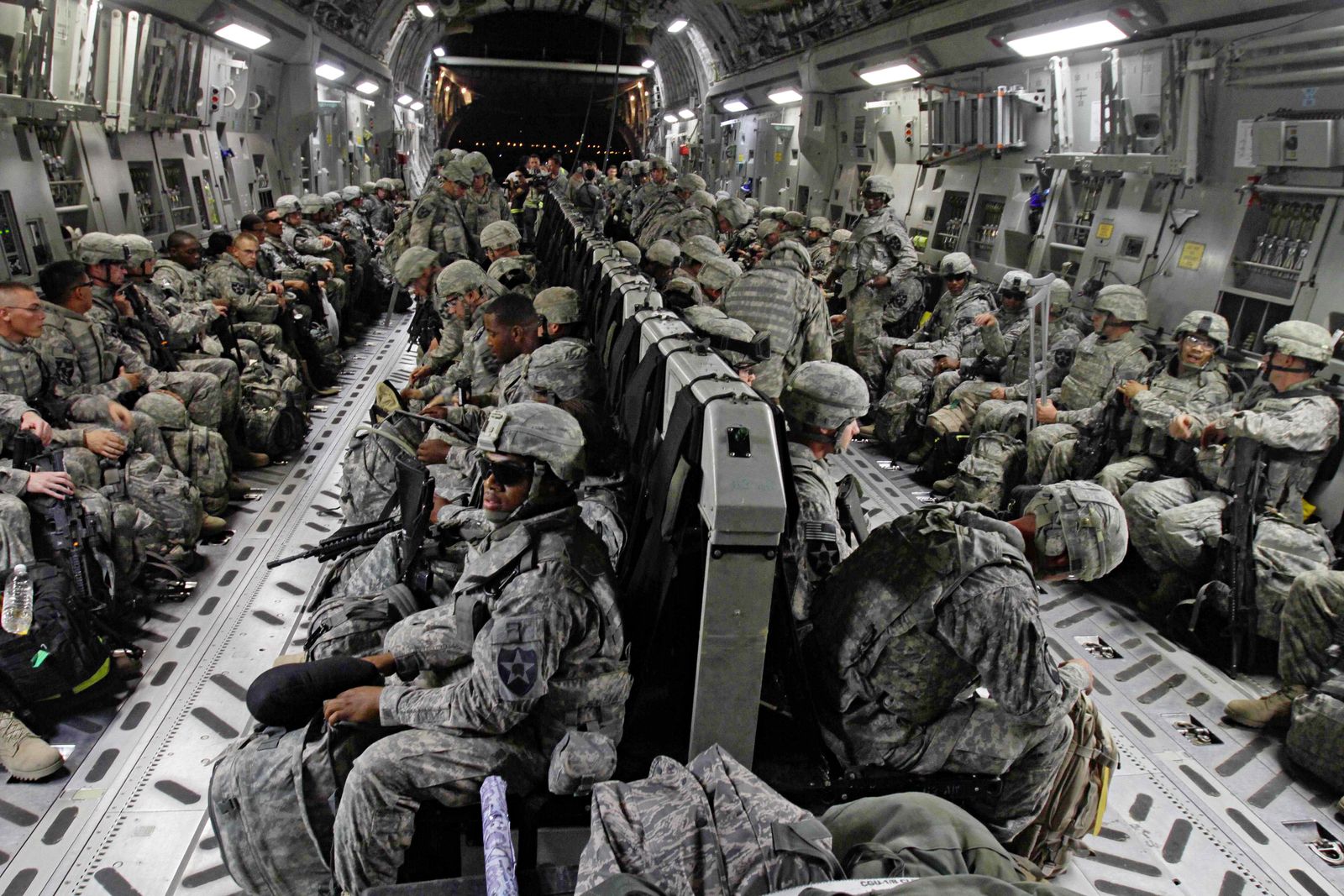