SPIEGEL: Mr. Prime Minister, the war and its consequences have cost more than 100,000 lives and caused great suffering in your country. Saddam Hussein and his regime are now part of the past. Was all of this worth the price?

Maliki: The casualties have been and continue to be enormous. But anyone who was familiar with the dictator's nature and his intentions knows what could have been in store for us instead of this war. Saddam waged wars against Iran and Kuwait, and against Iraqis in the north and south of his own country, wars in which hundreds of thousands died. And he was capable of instigating even more wars. Yes, the casualties are great, but I see our struggle as an enormous effort to avoid other such wars in the future.

SPIEGEL: Germany was opposed to the war. German Economics Minister Michael Glos was in Baghdad the week before last, Daimler AG plans to build trucks in Iraq, and you will travel to Berlin this week. Has everything been smoothed out between Germany and Iraq?

Maliki: We want closer relations, and it is my impression that the Germans -- the government, the people and German companies -- want the same thing. Our task is to rebuild a country, and the Germans are famous for effective and efficient work. We have great confidence in them and want to involve them in the development of our country.

SPIEGEL: And there is truly no resentment against a country that opposed the war in 2003?

Maliki: We do not judge our partners on the basis of whether or not they were militarily involved in toppling Saddam. The decisions back then corresponded to the national will of the countries, and we respect that.

SPIEGEL: What exactly do you expect from the Germans and from German companies?

Maliki: We want to get to know them, and we want to know what they want -- and the things they fear when thinking about Iraq. We have to start over again in many areas, including oil production, the development of the power grid and all industries. There is much to be done.

SPIEGEL: What do you expect from the Germans, politically and militarily? The Bundeswehr (German Armed Forces) occasionally trains Iraqi security forces -- but only in neighboring countries.

Maliki: What matters most to us is that we develop resilient political relationships and work together economically. Our security forces are steadily improving, partly as a result of German efforts. We will be pleased to turn to the Germans to equip our police and military; and should there be new training programs with the German Bundeswehr, we will be happy to accept their help. However, we would clearly prefer that the training take place in Iraq in the future. Overall, I believe that we are gradually becoming self-sufficient.

SPIEGEL: Three weeks ago, your government filed a civil lawsuit in New York against companies that allegedly paid bribes to officials in the Saddam regime. The defendants include three German companies: Daimler and Braun Melsungen and a number of Siemens affiliates. How is this compatible with your overtures to German industry?

Maliki: We are in negotiations with Siemens for the construction of power plants, which shows just how serious we are. Whether the suit you mention succeeds will be for the courts to decide. Under no circumstances will the consequence be that we no longer wish to work with the companies in question.

SPIEGEL: Large parts of Iraq's assets abroad remain frozen -- and inaccessible to creditors. Now, victims of the Saddam dictatorship want that money to go towards reparations. What will happen to this money when the UN Security Council mandate for Iraq expires at the end of this year?

Maliki: We have hired several international law firms to deal with these assets. At the moment, they are protected by UN resolutions, American law and the personal commitment of President George W. Bush -- and we want this protection to remain in place after the end of UN mandate on Iraq. We consider the claims being lodged against this money to be unjustified. Iraq cannot be punished for crimes that were committed by the dictator. This is very important to us, and a key aspect of our negotiations over the future status of US troops in Iraq.

SPIEGEL: Germany, after World War II, was also liberated from a tyrant by a US-led coalition. That was 63 years ago, and today there are still American military bases and soldiers in Germany. How do you feel about this model? 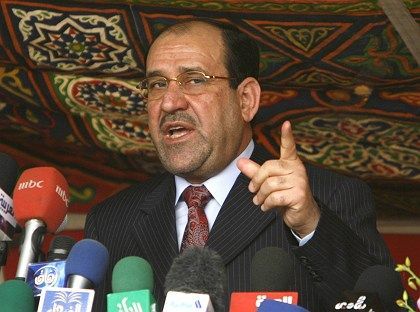 Iraqi Prime Minister Nouri al-Maliki says it is time for the Americans to commit to a withdrawal timetable.

Maliki: Iraq can learn from Germany's experiences, but the situation is not truly comparable. Back then Germany waged a war that changed the world. Today, we in Iraq want to establish a timeframe for the withdrawal of international troops -- and it should be short. At the same time, we would like to see the establishment of a long-term strategic treaty with the United States, which would govern the basic aspects of our economic and cultural relations. However, I wish to re-emphasize that our security agreement should remain in effect in the short term.

SPIEGEL: How short-term? Are you hoping for a new agreement before the end of the Bush administration?

Maliki: So far the Americans have had trouble agreeing to a concrete timetable for withdrawal, because they feel it would appear tantamount to an admission of defeat. But that isn't the case at all. If we come to an agreement, it is not evidence of a defeat, but of a victory, of a severe blow we have inflicted on al-Qaida and the militias. The American lead negotiators realize this now, and that's why I expect to see an agreement taking shape even before the end of President Bush's term in office. With these negotiations, we will start the whole thing over again, on a clearer, better basis, because the first proposals were unacceptable to us.

SPIEGEL: Immunity for the US troops is apparently the central issue.

Maliki: It is a fundamental problem for us that it should not be possible, in my country, to prosecute offences or crimes committed by US soldiers against our population. But other issues are no less important: How much longer will these soldiers remain in our country? How much authority do they have? Who controls how many, soldiers enter and leave the country and where they do so?

SPIEGEL: Would you hazard a prediction as to when most of the US troops will finally leave Iraq?

'As Soon as Possible'

Maliki: As soon as possible, as far as we're concerned. U.S. presidential candidate Barack Obama talks about 16 months. That, we think, would be the right timeframe for a withdrawal, with the possibility of slight changes.

SPIEGEL: Is this an endorsement for the US presidential election in November? Does Obama, who has no military background, ultimately have a better understanding of Iraq than war hero John McCain?

Maliki: Those who operate on the premise of short time periods in Iraq today are being more realistic. Artificially prolonging the tenure of US troops in Iraq would cause problems. Of course, this is by no means an election endorsement. Who they choose as their president is the Americans' business. But it's the business of Iraqis to say what they want. And that's where the people and the government are in general agreement: The tenure of the coalition troops in Iraq should be limited.

SPIEGEL: In your opinion, which factor has contributed most to bringing calm to the situation in the country?

Maliki: There are many factors, but I see them in the following order. First, there is the political rapprochement we have managed to achieve in central Iraq. This has enabled us, above all, to pull the plug on al-Qaida. Second, there is the progress being made by our security forces. Third, there is the deep sense of abhorrence with which the population has reacted to the atrocities of al-Qaida and the militias. Finally, of course, there is the economic recovery.

SPIEGEL: Critics have accused you of striking harshly against the Mahdi army of Shiite leader Muqtada al-Sadr, while going easy on his rival Ayatollah Mohammed Baqir al-Hakim's Badr militia.

Maliki: That's not true. We proceed just as firmly against anyone who breaks the law. Just a few days ago, we had an incident with a group associated with the Badr people. The army moved in immediately and arrested them all. No one was spared. The punishment is based purely on the nature of the crime, not on the identity of the criminal.

SPIEGEL: In southern Iraq, where you come from, you have been compared with Saddam Hussein when it comes to harshness.

Maliki: That's the sort of thing that people say who don't understand how urgently Iraq needs stability -- or these people prefer instability. We don't want to spread fear and terror in Iraq. We have, for example, given the militias several deadlines to hand over their weapons. Their resistance was tremendous, so we had to oppose them with tremendous force of our own.

SPIEGEL: What role do you envision for your chief rival, Muqtada al-Sadr? Can there ever be national reconciliation in Iraq without his participation?

Maliki: You can only reconcile with someone who wants to reconcile. His Excellency Muqtada al-Sadr can be a political partner, especially if, to that end, he draws on the great spiritual legacy he has inherited from his ancestors. He has understood that his following was eventually infiltrated by criminal elements, by men from the former regime, al-Qaida people and others. The fact that he is now in the process of systematically separating himself from these elements makes him even stronger as a political partner. As a politician, I might add, not as a militia leader.

SPIEGEL: You spent part of your exile in Iran, and you have visited the country several times since you took office. Can you explain to us what the leaders in Tehran are up to? Are they building a nuclear bomb? Do you see this as a serious threat?

Maliki: I have not been made privy to the details of the Iranian nuclear program. Iranian representatives assure us, however, that this program serves peaceful purposes. Even if Tehran wanted to develop a nuclear weapon, it would take a very long time, simply from a technical standpoint. It is obvious that our region is far too fragile for even a single country to possess nuclear weapons, because it will always be an incentive for other countries to also build their own.

SPIEGEL: Exactly 50 years ago, the monarchy in Iraq was overthrown and a republic established. But we didn't see any celebration of this event at all. What does that day mean for the history of Iraq?

Maliki: There may have been people who celebrated. But certainly not all Iraqis. On July 14, 1958, and era came to an end, but what came afterwards didn't live up to our expectations and hopes. What came were decades of military putsches and the dictatorship. We are still dealing with the aftermath today.

SPIEGEL: Mr. Prime Minister, your job is probably one of the most dangerous a politician can have. How do you cope with this, and what do you do to make it bearable?

Maliki: I lead a very simple life -- one that is shaped by external forces, which is apparently what fate has determined for us Iraqis. In that regard, the past few decades of dictatorship have not changed all that much. What keeps me going? The constant exertion of my job -- and the successes we are now having. It means a lot to me to see how much closer we are today to a democratic Iraq, one that respects human rights, than we were only a few months ago.

SPIEGEL: Mr. Prime Minister, thank you for taking the time to speak with us.