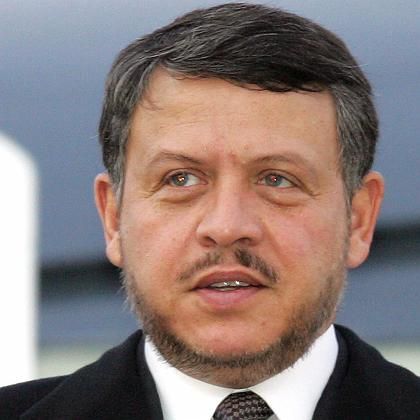 King Abdullah II: "The price of oil is a major economic hurdle in Jordan."

SPIEGEL: Your Majesty, this week Jordan is going to the polls to vote for a new parliament. What executive powers is this new assembly going to have?

Abdullah: Were hoping that this parliament will create a new political landscape. We need fewer, more broad-ranging parties -- ideally two, three or four representing the left- and right-wings and the political center.

SPIEGEL: Will enough Jordanians actually go to the polls?

Abdullah: Weve been talking a lot to the youth. I am concerned with getting young people more involved in the decision-making process of this country.

SPIEGEL: There are fears that the election results may be manipulated. The Islamists are even considering boycotting the elections.

Abdullah: We experienced that in the municipal elections, when leaders of the Muslim Brotherhood in foreign countries pressured Islamists in Jordan not to take part in the election to prevent them getting the necessary quorum. My instructions to the government were to make sure the elections were transparent. The Muslim Brotherhood have a good chance, and I hope theyre going to be good sports about it. Ultimately, it is my responsibility to make sure that the elections are clean and everything works out well.

SPIEGEL: Democracy is always associated with a risk that those who are enemies of democracy can be elected. What is the lesson to be learned from Hamas victory in the Palestinian territories? Is stability more important to you than democracy?

Abdullah: I think the success of democracy is not really police security; its the presence of a broad middle class. The stronger the middle class of a people is, the less you have to worry about one group coming in and exploiting the democratic process for its own ends. Our economic and social reforms are trying to strengthen the development of the middle class.

SPIEGEL: And what is the situation of the middle class in Jordan?

Abdullah: The middle class today in Jordan is shaky -- that has to do with the situation in the Middle East and the current price of oil. That is something we have to work on, and parliament will have to address that over the next four years. Parliamentarians must be active in improving education, health and social security -- thats whats important. I think the future of the Middle East lies in the hands of a strong, responsible middle class. And we have to admit that this political class is not really there yet.

SPIEGEL: How far have you come with your economic reforms? Where do you hope to find the investors to bring your country forward?

Abdullah: The economy has improved dramatically since 1999. We need to harness that growth to fight unemployment and poverty -- and do a lot more for education than has been the case until now. We put every extra dinar we have into the education system. Many Jordanians are working in the Gulf states. We'd like them to come back and find jobs in Jordan. Thats why I went to Germany last week to solicit investment. We aim to realize major infrastructure projects: alternative energy sources, water supply. Jordan may be a small country, but we are also a gateway to the Arab world.

SPIEGEL: Jordan and Egypt are the only Arab states to have concluded a peace treaty with Israel. Has this treaty paid off for you economically?

Abdullah: Peace with Israel is a strategic imperative for Jordan. As far as the direct impact on the Jordanian economy, our initial expecations have not been fulfilled. However, I am nevertheless convinced that our trade relations will profit once there is true peace in the region.

SPIEGEL: In the past 30 years the population of Jordan has almost doubled. And it is still growing rapidly -- primarily because of the continuing influx of refugees.

Abdullah: This has always been our lot, and we just have to live with it. The critical problem is the issue of water. Our reserves will soon be exhausted and we must take concrete measures in the next couple of years to solve the problem. We are planning major projects. I think there is a role for German companies to help us with that. Im talking about the groundwater reservoir on the Gulf of Aqaba, the Red and Dead Sea Canal and desalinization projects. 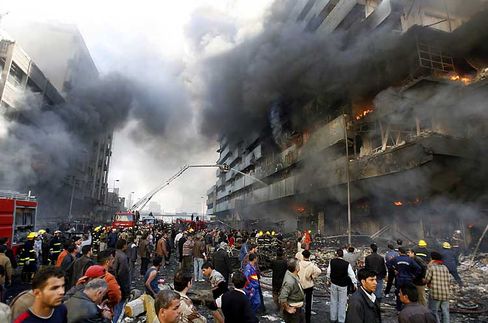 A car bomb attack in Baghdad: "I'm afraid these attacks will continue in the future."

SPIEGEL: About 750,000 Iraqi refugees are currently residing in Jordan. What is going to happen to them?

Abdullah: The overwhelming majority want to return to Iraq. In Jordan we are a bit sensitive about this issue, simply due to our history

SPIEGEL:  because in the years following the Israeli-Arab war of 1948 you took in millions of Palestinians, whose descendants now make up the majority of the Jordanian population.

Abdullah: We do not want to be a dumping ground for refugees. At the same time, we have a humanitarian obligation; we cant really close the borders and turn back people who are in need. Its very difficult to strike the right balance.

SPIEGEL: What is your perspective on the Iraqi situation now? Is the worst over?

Abdullah: There are good and bad days. Its going to take a long time. Iraq will be dependent on the efforts of the international community for years to come. But if you look at the three most volatile issues in the Middle East -- the Palestinian, Lebanese and Iraqi issues -- I tend to put Iraq in third place. The Israeli-Palestinian situation creates many more problems, followed by whats going on in Lebanon.

SPIEGEL: At the moment the number of suicide attacks in Iraq seems to be declining.

Abdullah: Im afraid these attacks will continue in the future. What has changed is the attitude of the Sunnis in Iraq towards al-Qaida. They are fed up with al-Qaida, so now al-Qaida is not just dealing with US forces, it has to deal with the local population -- at least in the province of Anbar. That is an improvement.

SPIEGEL: The Palestinian refugee drama is one of the main reasons behind the political crisis in the Middle East. Will the refugees coming from Iraq create similar crises?

Abdullah: The Israeli-Palestinian conflict is different in that it affects two different peoples. Ultimately, in the case of Iraq all the people involved are Iraqis -- Shiites and Sunnis, Kurds and Arabs. Iraq is an established nation and most Iraqis want to keep their country together.

SPIEGEL: You sound more much optimistic than you did a year ago. 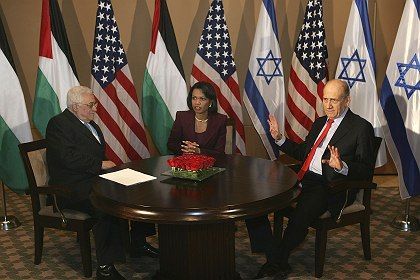 Mideast negotiating partners -- Palestinian Prime Minister Mahmoud Abbas, US Secretary of State Condoleezza Rice and Israeli Prime Minister Ehud Olmert in Jerusalem: "Do we really want to allow the Middle East to be engulfed by violance for another ten or 15 years?"

Abdullah: Again, I believe the Israeli-Palestinian conflict is a more serious problem. If we dont make decisive progress in the next six or seven months, we wont be in a position to achieve anything for at least the next four or five years. We do need American involvement to solve this issue, and, whether we like it or not, it will be at least two years before the next American president is in a position to re-tackle this problem. We must, therefore, use the coming months as our last opportunity. Or do we really want to allow the Middle East to be engulfed by violence for another 10 or 15 years?

SPIEGEL: The next big conference on the Middle East will take place in the US city of Annapolis in two weeks. What do you expect?

Abdullah: We are concerned about how little we know about the details of this conference. All the information is very general. If its still so vague at the start of the conference, I fear well be in for some surprises in Annapolis. Its high time we knew more about the concrete agenda.

SPIEGEL: Is Israel reluctant to agree to a concrete agenda?

Abdullah: What I hear from Israels Prime Minister, Ehud Olmert, is positive. Im not so sure about those around him. Olmert and President Mahmud Abbas have a good relationship and they both see where this needs to go. I just hope the negotiating teams come up with strategies that enable us to make progress in Annapolis.

SPIEGEL: What surprises are you concerned about? A return to the so-called "Jordanian solution" -- a federation of Jordan and the West Bank?

Abdullah: The Jordanian solution is not a solution, absolutely not. It will not be accepted by Arab world or by the Palestinians. It would be an outrage. Israel would embarrass itself with such a suggestion and be put in a very difficult position.

SPIEGEL: For some time now, many Arab countries have been talking about their desire to start a nuclear program. Why has that happened all of a sudden?

Abdullah: Take a look at the price of oil. This is not anything new. Countries such as Jordan have been talking to the West about the use of nuclear energy for two, three years. The price of oil is a major economic hurdle in Jordan, so I think we need to move quickly. Of course, all of this must be transparent and in agreement with the relevant international organizations. I hope that none of the countries in the Middle East are planning anything but the peaceful utilization of nuclear energy.

Abdullah: Not the Arab countries, in any case. Iran, I believe, does have aspirations to develop nuclear weapons. The Iranians themselves are saying that. But we have to avoid any ambiguity. After all, Jordan already has one neighbor with nuclear capabilities.

SPIEGEL: Israel, which has not officially admitted that it has nuclear weapons.

Abdullah: I think we need to have transparency from all the countries in the region. For the safety of all of us.

SPIEGEL: Do you have a concrete schedule for your nuclear program?

Abdullah: Were fortunate to be sitting on 3 percent of the worlds uranium reserves, and we have very high quality uranium here in Jordan. That makes nuclear energy all the more interesting for us. So, yes, we do have a nuclear program, and well probably do it through the private sector.

SPIEGEL: Even years ago, you warned about the strengthening Shiite nations and the emergence of a "Shiite Crescent." Has history proven you to be correct?

Abdullah: Our major concern was that one country was using Shiite Islam, in other words, religion, as a political tool. Today we have countries that we regard either as moderate or extreme. The moderate countries are Egypt, Jordan, Saudi Arabia and most of the Gulf states. On the other side you have Iran, Syria and, to a certain extent, Hamas in Gaza und Hezbollah in Lebanon. I hope that the peace process and the dividends it brings will help us to relieve such tensions.

SPIEGEL: Your Majesty, we thank you for this interview.