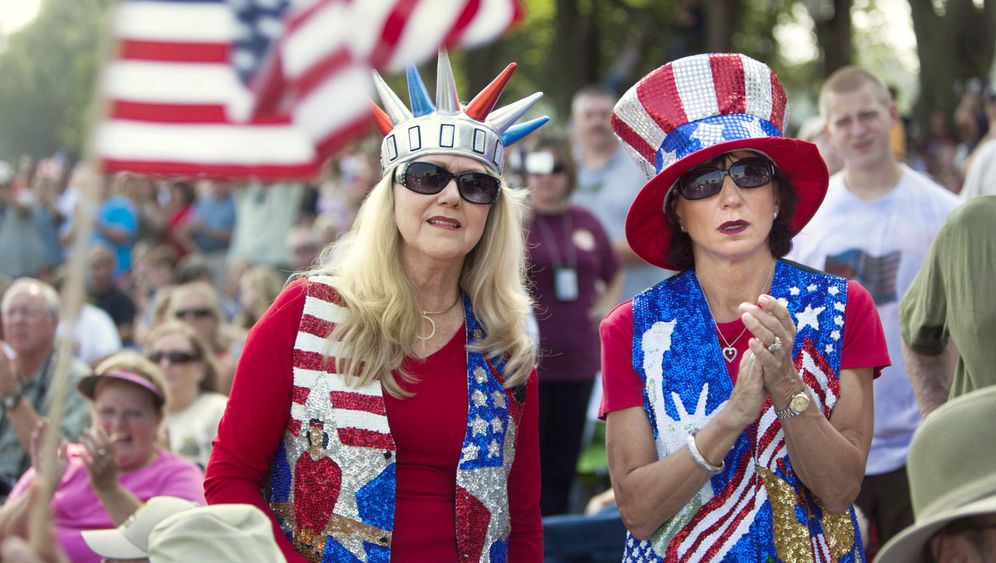 Photo Gallery: Moving to the Right

SPIEGEL: In the approaching midterm elections, the Republican Party is putting forward several unusually radical candidates, some of whom are not even "qualified to be a dog catcher," as one Republican said. What has happened with your party?

Rove: That's nothing unusual. In campaigns from both parties, people get nominated who are not typical, particularly in times of rapid change. For example, the Democrats in 1974, at the height of the Vietnam War, had a lot of very kooky candidates that they nominated.

SPIEGEL: Still, it's hard to imagine a major European party featuring a candidate like Christine O'Donnell, the Republican candidate in Delaware. She was forced to admit that she has experimented with witchcraft.

Rove: I know enough about European politics to know you've got a lot of crazy people who make their way onto the ballot.

SPIEGEL: You don't want to admit that O'Donnell isn't exactly a candidate that the Republicans can be proud of?

Rove: In Europe and the United States, you've got different systems to select candidates, and no system is perfect. In Germany you have a parliamentary system in which political parties weed out people. And the fact of the matter is that in Germany, on both sides of the aisle, particularly on the Social Democratic side, you have seen lousy leadership of the political parties that have allowed subpar candidates to emerge through the parliamentary system.

Rove: You have had candidates that the country rejected in a pretty profound way. Our primary system prevents this from happening as often.

SPIEGEL: Nobody is forced to vote for the party's list.

Rove: But the advantage of our system is that it is able to react to changes in public opinion better than the European system generally is able to. And, we tend to have broadly representative parties rather than sort of multiple parties that represent more narrow slices of the electorate and lead to coalition politics.

SPIEGEL: The Republican Party used to have a broad center. All of a sudden, we have this completely new phenomenon in which outsiders like Sarah Palin play a very large role in the party. She almost seems to dominate the party.

Rove: What's unusual about that? She's a rambunctious reformist former governor from the state of Alaska. Both parties have seen relative newcomers like this emerge before.

SPIEGEL: She wasn't, though, part of the Republican Party establishment.

Rove: Ronald Reagan wasn't in the establishment of the Republican Party either, nor was Richard Nixon.

SPIEGEL: It is nevertheless striking how little experience she has. That's new.

Rove: Oh really? I believe she was the chief executive of a state. She wasn't simply a newly elected senator from the state of Illinois who had absolutely no accomplishments whatsoever.

SPIEGEL: The inexperience of President Barack Obama was a major issue during his presidential campaign. His Democratic rival Hillary Clinton attacked him for it as well. It would seem that inexperience has turned into an asset in politics.

Rove: You may be right that people say: "You know what, we had Obama. He was inexperienced. The guy had great rhetoric, sounded good, looked good, but has turned out to be an utter disaster. I want someone where I have confidence and credibility that they're up to the job and that I can trust what they tell me."

SPIEGEL: So is Palin the right person to succeed Obama?

Rove: I don't know. That's what the coming presidential campaign will be about. It will be fought out over two sorts of broad baskets. One is the way in which somebody governs, and the other is the things on which they act; if you will, their persona and their agenda. Last time around, it was very much about the persona.

SPIEGEL: Many would say that the Republican Party has moved continually further to the right. Now, the Tea Party is pulling the party even further in that direction. How much is too much?

Rove: I disagree with your assumption. It looks like it's moved because the Democrats have gone so far left. Name me one other instance in which the federal government increased discretionary domestic spending 25 percent in less than one year. There has been a bipartisan consensus since World War II that the size of the federal government would be roughly between 18 to 21 percent of GDP, floating around 20 percent. Obama is the first president to cross that line so dramatically.

SPIEGEL: Europeans see Obama as a middle of the road Democrat and don't understand the unending criticism.

Rove: He probably is a middle of the road social democrat, but remember America does not have a history of social democracy. We have been a country in which even the Democrats have been to the right of the left in Europe, and that's one of our strengths. A lot of people call him a socialist. I don't. He is a social democrat, though. He is somebody who says, "Okay, the state will regulate, the state will dictate. We will take an ever larger share of the GDP into the hands of government, and we will dictate to the private sector, but maintain ownership in private hands, subject to the regulatory state."

SPIEGEL: But is he so different from other Democratic presidents? Take Lyndon B. Johnson. He introduced Medicare.

Rove: Even LBJ in Medicare insisted upon a robust private role. Obama is culturally and philosophically to the left of Johnson.

SPIEGEL: Are you convinced, then, that the Republican Party will be able to integrate the Tea Party without drifting too far to the right?

Rove: Sure. There have been movements like this before -- the Civil Rights movement, the anti-war movement, the pro-life movement, the Second Amendment rights movement. All of them popped up, insistent, loud, and relatively unsophisticated. They wanted everything now and for politicians to be with them 100 percent of the time. And after an election or two, people wake up saying, our system produces mostly incremental progress and takes time and compromise. That's exactly what's going to happen here. I meet a lot of Tea Partiers as I go around the country, and they are amazing people. Most have never been involved in politics before. This is their first experience, and they have the enthusiasm of people who have never done it before.

SPIEGEL: Is the Tea Party movement a repeat of the Reagan Revolution?

Rove: It's a little bit different because the Reagan Revolution was driven a lot by the persona of one man, Ronald Reagan, who had an optimistic and sunny view of what the nation could be. It was also a well-organized, coherent, ideologically motivated and conservative revolution. If you look underneath the surface of the Tea Party movement, on the other hand, you will find that it is not sophisticated. It's not like these people have read the economist Friedrich August von Hayek. Rather, these are people who are deeply concerned about what they see happening to their country, particularly when it comes to spending, deficits, debt and health care.

SPIEGEL: It is, however, difficult to understand the smear campaigns against Obama, claiming that he falsified his birth certificate and is not the legitimate president.

Rove: Please, with all due respect. That's what happened for eight years with Bush. Just before George W. Bush was sworn into office, on "Meet the Press," Dick Gephardt, the Democratic leader of the House of Representatives, was asked by Tim Russert twice if he believed George W. Bush was the legitimately elected president of the United States. And twice, the leader of the Democrats refused to answer the question. I was shocked, and that was what we had to deal with for eight years.

SPIEGEL: It has become fashionable for Republicans to blame everything on Barack Obama. But the Bush administration has also been criticized for massive government spending. John McCain describes the current anger as the "Bush hangover."

Rove: There is some anger about the bank bailout, which was the right thing to do and which Bush will defend.

SPIEGEL: Nobody really disputes that.

Rove: Some people in the Tea Party movement do, but not all. What really got them was Obama's mortgage bailout. Remember the Tea Party movement didn't get started in September of 2008 when the bank bailout was passed. It really began on Feb. 19th, 2009 when a television commentator named Rick Santelli stood up and said what the hell are we doing bailing out people who couldn't afford a mortgage by taking money from people like me who are prudent?