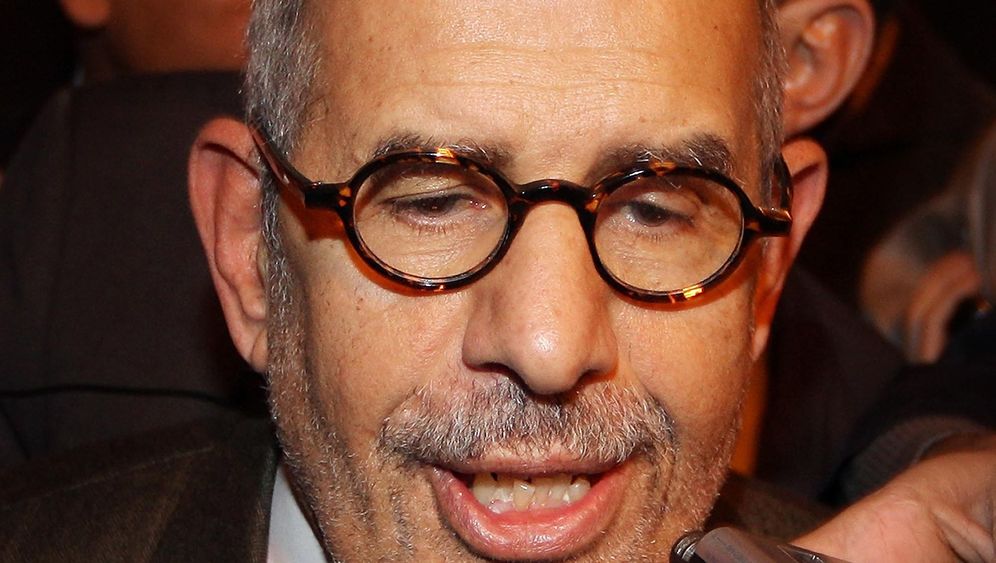 SPIEGEL: Mr. ElBaradei, more than nine weeks after he was forced to resign, former Egyptian President Hosni Mubarak is now in custody. Does this make you happy?

Mohamed ElBaradei: Yes, it's wonderful that the government and the military council, which is supposed to guarantee the transition to a new Egypt, could bring themselves to do it. This takes our revolution an important step further. But it was also high time to take action against Mubarak and everyone else who belonged to his system…

SPIEGEL: …like his sons Gamal and Alaa, who were also arrested.

ElBaradei: The arrests were overdue. Countless demonstrators had called for this step in recent days.

SPIEGEL: Could the arrest be a calculated move on the part of the military council, which the Egyptians on Tahrir Square have recently accused of inaction?

ElBaradei: I don't want to accuse the military leadership of that. (The military council) argues that the courts needed time to prepare for the arrest. However, I think that it should have acted much earlier. Instead, Mubarak had too great an opportunity to cover up anything incriminating. The mere fact that, before stepping down, Mubarak allegedly issued the order to shoot at the protesters would have been reason enough to arrest him immediately.

SPIEGEL: Nevertheless, if it hadn't been for the most recent protests on Tahrir Square, Mubarak would not be in detention today.

ElBaradei: It seems, at least, that the military leadership needs pressure. This doesn't exactly strengthen the population's confidence in the generals, which is why the relationship between the two sides is so tense. But the military leaders are gradually learning how to handle their new role. They understand that they now have political responsibility, that they must act and that they will be criticized if they don't do so. This is something new for them, and they'll have to get used to it.

SPIEGEL: You have no doubt that the former president and his sons will be put on trial?

ElBaradei: The military council has no other option than to try Mubarak and bring everyone else to justice who is responsible for human rights violations or corruption. If the president had resigned right away, at the beginning of the revolution, as I advised him to, he would have preserved the chance of a dignified departure.

SPIEGEL: But then he and his clan could have squandered the billions of dollars they have supposedly accumulated.

ElBaradei: I don't know whether such claims about his assets are true and on which sources they are based. We should wait for the trial, which will clear up these charges.

SPIEGEL: Mubarak denied all the charges in an audio message shortly before his arrest.

ElBaradei: It's outrageous. First the military leadership gives him enough time to move his money, and then he's allowed to claim poverty. Giving Mubarak the opportunity to make this statement was a serious mistake. This self-righteous portrayal, this insistence of not having a fortune, these clumsy attempts to clear his name -- this is what fuelled the protests once again.

SPIEGEL: Many are also suspicious about the supposed deterioration of Mubarak's health. Could this be an attempt to prepare a loophole that will save the former president from having to appear in court?

ElBaradei: There may be delays, because the illness of a defendant must, of course, be taken into account. In the end, however, Mubarak will have to stand trial. He won't be able to escape that. If the military leadership hopes to remain credible, it cannot stand in the way of a trial.

SPIEGEL: The protesters in Tahrir Square have also been calling for the resignation of General Mohammed Hussein Tantawi, the chairman of the military council.

ElBaradei: I am on the side of the protesters when it comes to calling for a national dialogue, for participation and transparency. But I think risking a clash with the army …

SPIEGEL: … which intends to take decisive action against further protests …

ElBaradei: … would be the worst thing that could happen to us. Then we will plunge into chaos. The military council is the only institution that still works well in Egypt. That's why it is all the more important that the military leaders do not gamble away the trust of the people. They must open up and take action. Giving statements on television isn't enough. That's not a dialogue.

SPIEGEL: Many are now saying that "Mubarak and Tantawi are the same hand." The general was a close adviser to the president for more than 20 years.

ElBaradei: Egypt is in a very critical phase. Every change from an autocratic regime to a democracy comes with compromises. I believe Tantawi and the military leaders and assume that they really only want to manage the transition.

SPIEGEL: You apparently have more confidence in the general than the US Embassy in Cairo. According to a 2008 report made public by WikiLeaks, Tantawi opposed reforms because he apparently perceived them as "eroding central government power."

ElBaradei: That's why it's all the more important to keep urging the military council to act. Why have all provincial governors remained in their positions to this day? Why is it that the old dignitaries and politicians throughout the country still haven't been removed from office? We should remain very vigilant, because the army leadership is reacting very slowly -- too slowly.

SPIEGEL: But the generals can act very quickly when it comes to punishing their critics. Only a few days ago, a military court sentenced the blogger Maikel Nabil Sanad to three years in prison for insulting the "national institution" of the army.

ElBaradei: It's incomprehensible for a civilian to be sentenced by a military court. This is a relic from the era of Mubarak, who used the emergency laws …

SPIEGEL: … which are still in effect …

ElBaradei: … to make sure that critics disappeared into prisons. This conviction shouldn't have happened in the new Egypt. It increases the loss of trust in the military. The officers must learn to live with criticism. If the young man's case is retried before a civilian court, it will be an important step in the right direction.

SPIEGEL: One of the military's promises was to relinquish power by no later than the end of the year. Will that happen?

ElBaradei: Whether it takes 10 months or a year isn't so important, as long as the military leaders do their jobs honestly. We shouldn't rush the preparations for the parliamentary election and the discussion about a new constitution.

SPIEGEL: It sounds as if you are arguing in favor of allowing the military council to stay in power longer.

ElBaradei: I wouldn't have a problem with it. Many statesmen, especially those in Eastern Europe, whose countries went through a similar transformation, have advised me in personal conversations not to do things too quickly. What good is it if we quickly hold elections that are free and fair, but not representative? The important thing is that we stick to a timetable, at the end of which the military returns to its barracks. I have no doubt that that's what they will ultimately do.

SPIEGEL: Your optimism is admirable. When you were still the director general of the International Atomic Energy Agency (IAEA) in Vienna, you even felt confident that you could solve the nuclear conflict between Iran and the international community. But that didn't work out.

ElBaradei: We were in fact on the verge of a solution on several occasions. The Iranians were willing in 2003, but the administration of then US President George W. Bush was not. Then, in 2010, when President Barack Obama extended his hand, the Iranians couldn't take it, because of domestic political power struggles.

SPIEGEL: In your soon-to-be-published memoirs, you describe how you were deceived in your attempts to investigate.

ElBaradei: I adhere strictly to the facts, and part of that is that the Americans and the Europeans withheld important documents and information from us. They weren't interested in a compromise with the government in Tehran, but regime change -- by any means necessary.

SPIEGEL: And the poor Iranians were completely innocent?

ElBaradei: No, they too engaged in trickery. But the West never tried to understand that the most important thing for Iran was getting recognition and being treated as an equal.

SPIEGEL: Your negative experiences in politics don't seem to have deterred you enough that you would withdraw your bid for the presidency in Cairo.

ElBaradei: I am confident that by the time of the presidential election, which is currently scheduled for the end of the year, we will have created the democratic conditions that I have always made a condition of my candidacy.

SPIEGEL: You aren't afraid that Egypt's process of democratization could fail, just as the mediation in the Iranian nuclear conflict did?

ElBaradei: Both cases can be resolved, but perhaps the Egyptian situation can be fixed sooner, because the number of players is smaller. 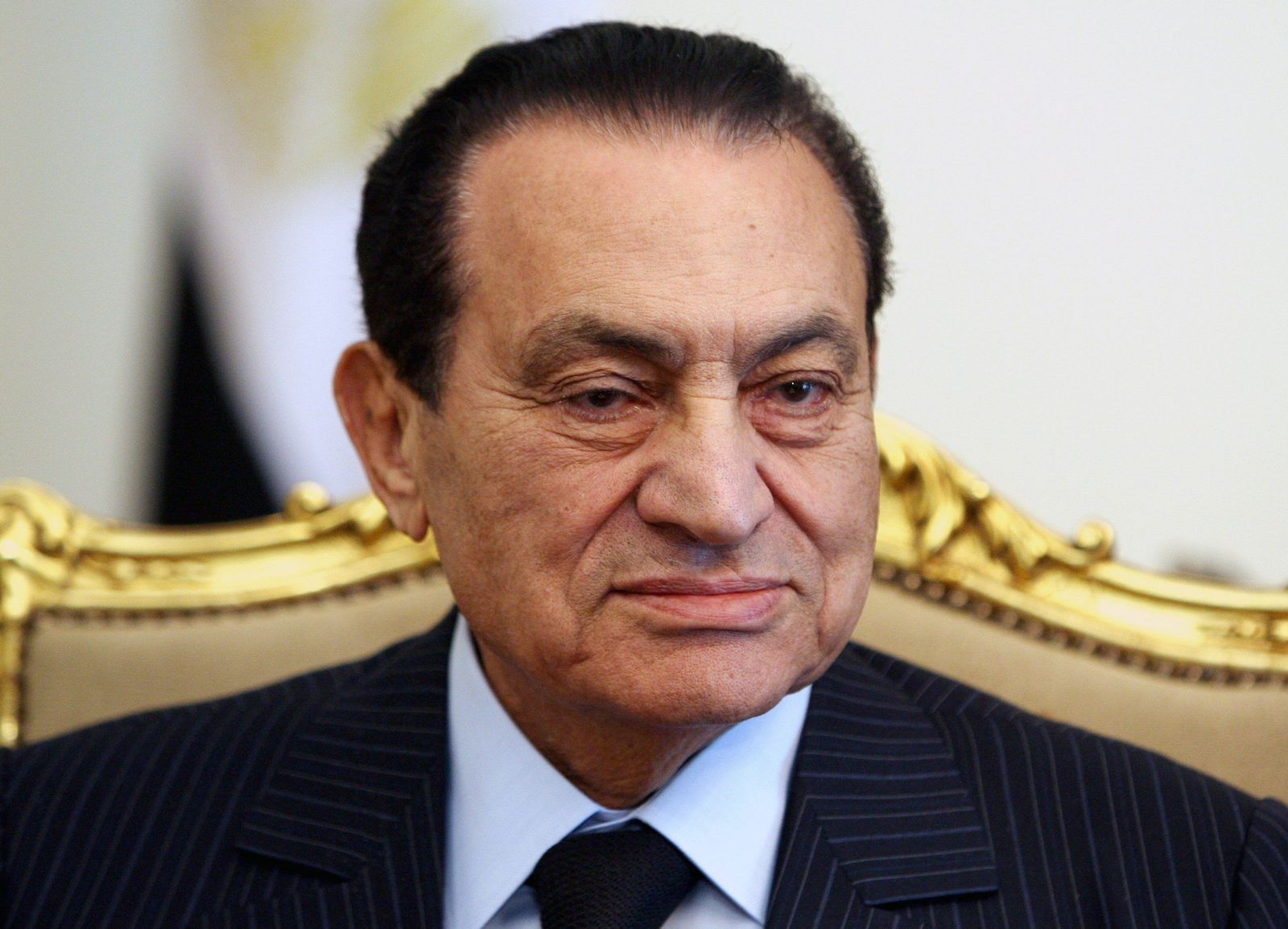 Hosni Mubarak (Feb. 9 photo). "If the president had resigned right away, at the beginning of the revolution, as I advised him to, he would have preserved the chance of a dignified departure," ElBaradei told SPIEGEL.