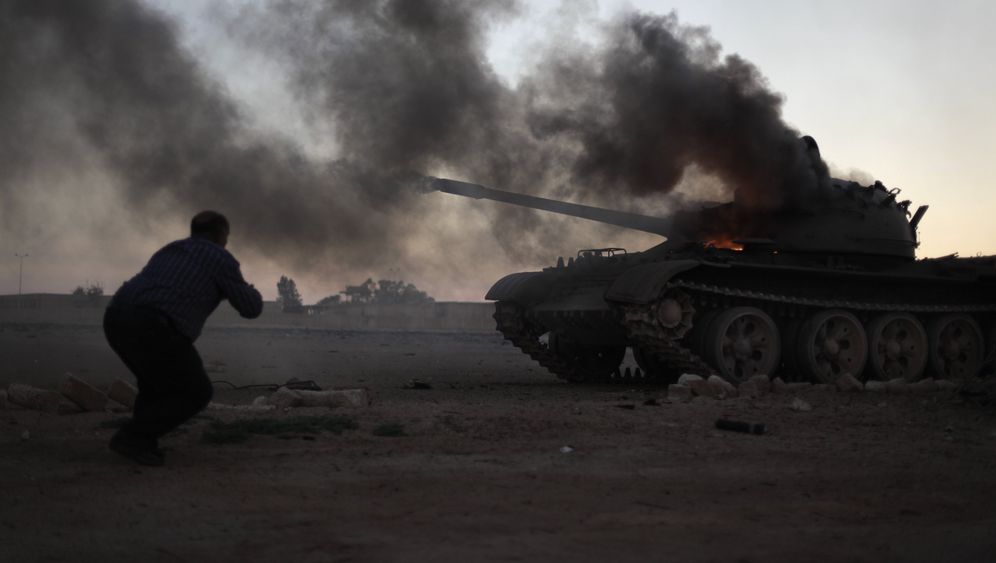 SPIEGEL: Mr. Secretary General, the military leadership of the Libyan rebel government has leveled serious charges against NATO, saying the alliance has not been active enough in flying air strikes against troops loyal to Libyan dictator Moammar Gadhafi and is thus partly responsible for the deaths of countless civilians. Is NATO failing?

Rasmussen: I can assure you that we are fully implementing United Nations Security Council Resolution 1973 to protect the Libyan civilian population. The scope and speed of our operation remain high. During the first week of our NATO operation alone, we flew more than 1,000 sorties. We have already destroyed a third of Gadhafi's military machinery.

SPIEGEL: The foreign minister of the Libyan transitional council, Ali al-Issawi, says that the problems began after the initial coalition -- led by the US, Great Britain and France -- turned over the command to NATO. According to Issawi, NATO is obstructing and even betraying the resistance.

Rasmussen: That's not fair. To some extent, we have been hampered by bad weather, which may have created the impression that we have scaled down our campaign. But that was unavoidable, and it has long since changed again. We are currently flying at least as many air strikes now as we were before.

SPIEGEL: But not necessarily with more success. And there remains the high risk of civilian casualties. Was it not to be expected that Gadhafi would abuse civilians as human shields?

Rasmussen: Yes, you're right. He has changed his tactics. But that also points to our successes. Now that he has to hide his tanks and other heavy weapons, he can no longer use them as easily against civilians. The fact that the regime is using people as human shields also points to its unbelievable brutality. Gadhafi knows that we have to do everything, and want to do everything, to avoid civilian casualties, and he's taking advantage of that.

SPIEGEL: Some rebel leaders are encouraging you to accept this "collateral damage" and, if necessary, to bombard central neighborhoods of the embattled city of Misurata if you could decisively weaken Gadhafi's forces by doing so. Is it a question of strategy, or of morality?

Rasmussen: Some chastise us because we are supposedly too cautious, while others criticize us for doing what we are doing. It's a difficult line to walk. Our mission is to protect the civilian population. After all, we don't have any troops on Libyan soil.

SPIEGEL: Can this war be won without ground troops?

Rasmussen: The honest answer is that there is no military solution to this conflict. We need a political solution, and it's up to the Libyan people to come up with one. We can only call upon the leadership in Tripoli to put an end to its acts of violence, to grant the people their legitimate rights and to permit a peaceful transition to democracy.

SPIEGEL: What happens if Gadhafi doesn't comply with these demands? Wouldn't NATO at least have to provide for weapons parity and begin supplying tanks and missiles to the rebels?

SPIEGEL: On the other hand, though, Resolution 1973 expressly allows for the protection of the civilian population "with all means necessary." British Defense Secretary Liam Fox has said that Gadhafi could indeed be a possible target of operations. Some international law experts agree.

Rasmussen: I will not enter into a legal dispute over questions of interpretation. We are focusing on implementing the resolution.

SPIEGEL: This isn't just a question of legal interpretation. The greatest threat to the civilian population stems from the dictatorial regime, from the despotism of Gadhafi and his clan. How can a solution be possible in Libya without Gadhafi and his clan leaving the country or being arrested?

Rasmussen: Of course the threat against the civilian population comes from the Gadhafi regime. The UN Security Council has clearly stated that the actions of the regime could constitute crimes against humanity. And Gadhafi could be tried for such crimes in the International Criminal Court.

SPIEGEL: What criteria have to be met so that you can call the NATO operation "Unified Protector" a success?

Rasmussen: If we manage to stop the violence, so that there is no longer a threat to the Libyan civilian population.

SPIEGEL: The implementation of a no-fly zone alone is extremely costly. Such zones had to be maintained for years in the Balkans and Iraq.

Rasmussen: I very much hope that we will be able to find a political solution in the near future. The worst outcome would be a military stalemate or a de facto partition of Libyan society, in which Libya would become a failed state and a breeding ground for terrorist groups -- and that so close to Europe's borders.

SPIEGEL: At the moment, it's looking like a military stalemate is a very real possibility. Libya is already de facto divided. Is peace in a divided Libya possible?

Rasmussen: In the end, it will be up to the UN to help Libya achieve a political solution to this crisis. The territorial integrity of Libya must be maintained.

SPIEGEL: Would you welcome a cease-fire? Would it have to be tied to conditions?

Rasmussen: The UN resolution calls for a cease-fire. It should be credible and verifiable. The protection of the civilian population must be guaranteed. Under no circumstances may a cease-fire cement the current situation. On the contrary, it must create the conditions for a constructive political process.

SPIEGEL: From whom do you receive the coordinates for air strikes -- from the rebels, who may not always be trustworthy, or from CIA agents on the ground?

'I Have No Problems with the Germans'

SPIEGEL: Can you imagine a future for Libya without the entire Gadhafi clan leaving the country?

Rasmussen: The message of UN Resolution 1973 is clear: Any solution must take the legitimate wishes of the Libyan people into account.

SPIEGEL: German Chancellor Angela Merkel has said that if one intervenes in Libya, then intervention in other trouble spots becomes unavoidable. Is she wrong?

SPIEGEL: It wasn't NATO but a "coalition of the willing," including France, Great Britain and the United States, that launched the initial air strikes against Gadhafi's positions.

Rasmussen: I was very supportive of this rapid commitment by the coalition. The air strikes began literally at the last minute.

SPIEGEL: NATO was unable to achieve a rapid consensus over military intervention. The French were opposed to NATO leadership of the mission and wanted to play the leading role themselves, the Germans refused to get involved militarily and the Turks long obstructed an intervention.

Rasmussen: Many lengthy meetings were necessary before we reached a joint decision. But compared with the past, we reached agreement relatively quickly this time. In the 1990s, when NATO became active over the Balkans, it took the alliance several months to prepare a campaign. This time it took only a week.

SPIEGEL: Germany's abstention from the UN Security Council vote on Resolution 1973 has been widely criticized. You called it "absurd" that the Germans opted not to make its military capabilities available to the alliance.

Rasmussen: I will not comment on internal discussions within the NATO council.

SPIEGEL: In response to your criticism, the German NATO ambassador walked out of the room in protest.

Rasmussen: We have many long meetings in the NATO council, during which people are constantly coming in and going out. What counts is that we agreed in the end.

SPIEGEL: The Germans are still waiting for an apology.

Rasmussen: I have no problems whatsoever with the Germans.

SPIEGEL: Do you see a tendency toward pacifism in Germany?

Rasmussen: I greatly value Germany's contribution to NATO. When I meet Berlin politicians, no matter what their politician affiliation, I sense a strong commitment to the trans-Atlantic partnership. Germany has been very involved in NATO operations, especially in Afghanistan, but also in Kosovo.

SPIEGEL: Now you're painting a rather rosy picture. The United States, Great Britain and France voted for the Libya resolution in the Security Council, while Germany joined China and Russia in abstaining. How is that consistent with commitment to the trans-Atlantic alliance?

Rasmussen: Even though the Germans abstained in the Security Council, which some found incomprehensible, their role in the ensuing NATO meetings was very constructive. Berlin didn't obstruct the mission. On the contrary, it has now even issued a mandate for German involvement in AWACS reconnaissance flights over Afghanistan.

SPIEGEL: In doing so, Germany essentially bought its way out of the Libyan campaign. Only two months earlier, Berlin was still refusing to take part in an AWACS mission in Afghanistan.

Rasmussen: But this also highlights the flexibility of the Germans. Berlin abstained in the Security Council, but in NATO it supported the Libya campaign and assumed more responsibility in Afghanistan.

SPIEGEL: Germany has now agreed to provide military protection for a European Union humanitarian mission in Libya. Is this more than a gesture of good will?

Rasmussen: I welcome all contributions that improve the situation in Libya. I am very concerned about the humanitarian situation there, but NATO does not assume a leading role on this issue. The United Nations should handle the coordination of humanitarian aid. The EU can play a supporting role.

SPIEGEL: When it comes to Afghanistan, there is growing war fatigue in all NATO countries, and Afghan President Hamid Karzai has made it clear that he wants the ISAF mission to end quickly. How much longer do you see NATO in Afghanistan?

Rasmussen: At the NATO summit in Lisbon last fall, we agreed to a timetable together with the Afghans. I have complete confidence in President Karzai. We plan to begin a gradual transition process in July. The control of seven regions will be handed over to the Afghans. Hopefully this process will be complete by the end of 2014. However, we will continue to conduct our mission there after the combat portion is over, supporting the Afghans in the development and training of their troops. We will not leave behind a vacuum.

SPIEGEL: In August you will have been head of the defense alliance for two years. Did you expect so many difficulties? As a result of the WikiLeaks publications, we now know that an American mole secretly forwarded documents and the minutes of meetings from your office to Washington.

Rasmussen: I have been in politics for so long that nothing surprises me anymore.

SPIEGEL: At the beginning of your term, you said that you wanted to be more of a general than a secretary. Some in the alliance are taken aback by your assertive manner. Do you need to be more gentle and compromising, or is banging on the table with one's fist simply a part of the top job at NATO?

Rasmussen: I am not a patient person by nature. But I was the head of a minority government in Denmark and have spent countless hours forging majorities. There are 28 members of NATO, and all decisions must be made unanimously. This means that I often have to be more of a secretary and focus on mediation.

SPIEGEL: Mr. Secretary General, thank you for this interview. 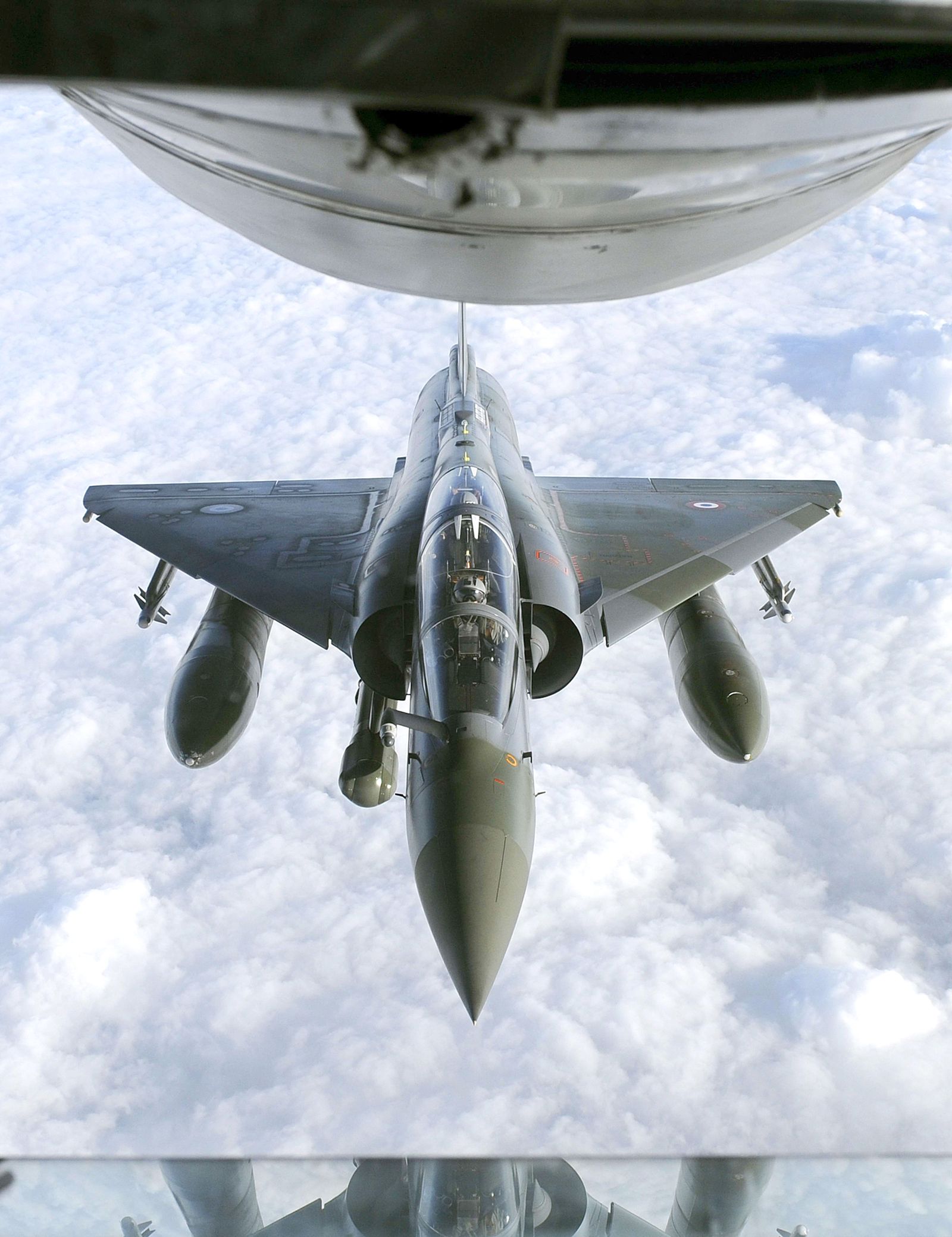 The US has ceased flying missions in Libya and the French and British continue to take the lead in the effort. Here, a French Mirage 2000 approaches an airborne refuelling tanker.