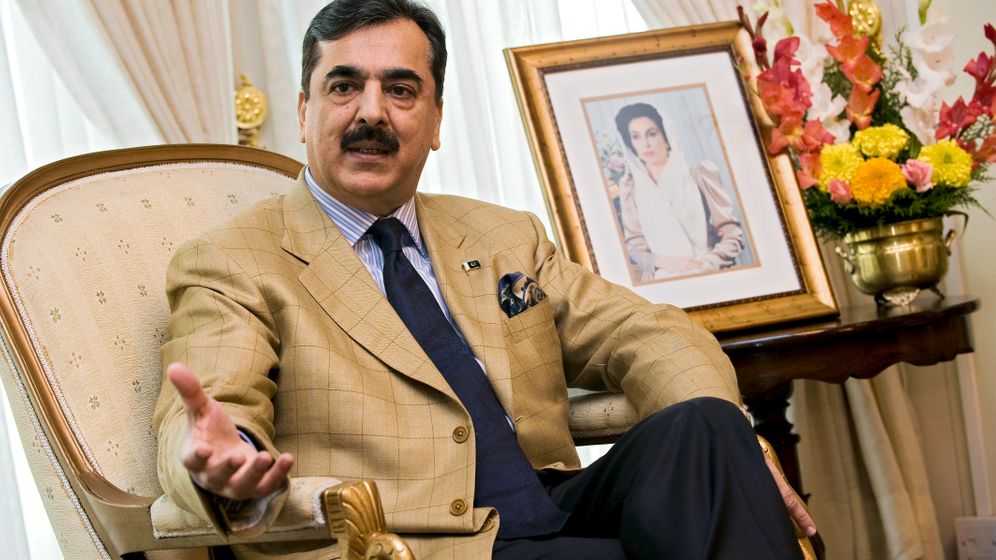 SPIEGEL: Mr. Prime Minister, Pakistan is being shaken by more and more terror attacks. In the past few weeks, the number of assaults has increased noticeably. Moreover, your government is at war with militants in Waziristan. Do you still enjoy being prime minister?

Yousuf Raza Gilani: I have taken a special responsibility in a unique situation of my country. Pakistan is a frontline state in a conflict which will decide the peace, progress and prosperity not only of Pakistan or South Asia, but of the whole world. So you can imagine what my job is about. I personally feel that it is our duty to perform successfully. As far as our military activities in South Waziristan are concerned, I followed the policy of dialogue and development first. But when the country was challenged by the militants, there was no other option left than military action.

SPIEGEL: Many people in Pakistan consider this approach a war against the country's own people.

Gilani: The people we are fighting are militants. They are not from Pakistan, they are Uzbeks, they are from Chechnya, they are Arabs and Afghans. And they cooperate with foreign agents to disturb the peace in Pakistan.

SPIEGEL: Are you saying that there are no Pakistani Taliban?

Gilani: Of course there are Pakistani militants, but the insurgencies are driven by foreign elements.

SPIEGEL: Let me guess: You believe that the Indian intelligence service is behind it.

Gilani: In fact, to some extent there is a lot of interference in Afghanistan. This is not only our opinion, but also the belief in the United States.

SPIEGEL: But there has not been any proof of Indian involvement.

Gilani: I am not saying that there is. But the insurgency in Afghanistan has been analyzed by many experts, including from American think tanks, and they have mentioned this.

SPIEGEL: You are talking about Afghanistan, but it is Pakistan that has been repeatedly described as the "most dangerous place in the world." Don't you think it is too easy to say that only foreign elements are responsible?

Gilani: The world is always only focusing on terrorism when it comes to Pakistan. This has, of course, harmed the reputation of our country. We must not forget that there are so many other areas and avenues which are very conducive for Pakistan. Despite all the things that are going on here, there are so many places not affected by terrorism. We are giving a lot of security to the employees here, also to those who have come from other countries. There are many engineers, for example. But, unfortunately, we see many lost opportunities for investment because of this focus on terrorism -- and that harms not only Pakistan, but also the foreign investors. Can't one see that there is a lot of development in Pakistan going on?

SPIEGEL: Are you disappointed about the world's opinion of Pakistan?

Gilani: Pakistan should not be portrayed only as a country at war. When there was a Soviet invasion in Afghanistan, there were many allies fighting the invaders in this war. We were part of this alliance. After this war, the world forgot about this region, and that vacuum was filled by the militants. We are facing those problems even today. They have been thrust upon us.

Gilani: We haven't stopped them from helping us. In fact, we have a multi-dimensional cooperation with the United States, including defense and intelligence, but also economics, trade, development, health education and even in cultural affairs. But these drone attacks are counterproductive.

SPIEGEL: Really? The leader of the Pakistani Taliban, Baitullah Mehsud, was killed by an American drone. Don't you call this a success?

Gilani: The political and the military leadership have been very successful in isolating the militants from the local tribes. But once there is a drone attack in their home region, they get united again. This is a dangerous trend, and it is my concern and the concern of the army. It is also counterproductive in the sense that it is creating a lot of anti-American sentiment all over the country. But in order to fight the militants in Waziristan, we have to carry the public with us. One cannot go into any war without the support of the masses. We need huge public support to combat terrorism. But we do not get that if there is American interference, which we do not ask for.

SPIEGEL: But no matter what the Americans do, there will always be anti-American sentiment.

Gilani: Right now, the whole nation is supporting our military action because they feel that terrorism is a menace.

SPIEGEL: In the past few weeks, US Secretary of State Hillary Clinton, National Security Adviser James Jones and CIA Director Leon Panetta all visited Islamabad. Were the visits an attempt to improve America's reputation here?

Gilani: The war in Waziristan is our own war. Once there is American interference, as with the drones, the public starts thinking that it is a proxy war. At times, the public sentiment is quite anti-American. That is why we are convincing Washington that there should be more cooperation in the fields of defense and intelligence. And cooperation means cooperation, not doing anything without our consent. At the same time, we need a regional balance, too. It should not be seen that the Americans are doing something on behalf of the Indians. If this was the case, then public opinion would totally turn against the Americans.

SPIEGEL: Are you in favor of the US staying in Afghanistan? Once it withdraws, there will be no balance at all in the region.

Gilani: A stable Afghanistan is very much in the interest of Pakistan. We have been coping with millions of refugees in Pakistan, and they have been here for many decades. Now they have merged into our society, they are doing business here and their children have grown up here. There is a lot of cross-border activity going on, too. So that is why we need a stable Afghanistan. There people should be able to go back to their own country with dignity.

SPIEGEL: So you support the new strategy of US President Barack Obama to first increase the number of soldiers and then leave Afghanistan in the near future?

Gilani: We support any policy which is in the interest of the Afghani people. The main goal should be stability in the region.

SPIEGEL: The picture you are drawing is not exactly ideal for attracting more foreign investment to Pakistan. This week you are visiting Germany to try to accomplish just this. What are you going to tell German companies?

Gilani: Again, we should not stick to terrorism. Not the whole country is attacked by terrorists. Only specific areas -- those close to the border to Afghanistan -- are affected and we are very successfully handling the situation. Nowhere else in the world have 2 million refugees, so-called internally displaced persons, been sent back to their homes within only 10 weeks, as happened after our military action in the Swat Valley this summer. This is unprecedented in the history of the world. Therefore we are confident even about South Waziristan. We have already taken over the militants' strongholds, which has never happened before in that region. At the same time there is a lot of investment already coming to Pakistan.

SPIEGEL: That does not seem convincing enough for German companies.

Gilani: We have a special relationship to Germany. Pakistan and Germany were the first countries in the world to sign a bilateral investment treaty, back in 1959. Why shouldn't we continue with this good relationship? Germany is already our fourth biggest investor; the European Union is number one.

SPIEGEL: Can you imagine what the German public would say if German arms manufacturers were to invest in Pakistan?

Gilani: We are looking for investments in all fields. We have a lot of opportunities, for example, in the agricultural sector or in the fields of power generation and infrastructure.

SPIEGEL: There have been a lot of media reports in recent months about Pakistan's plans to buy submarines from Germany, something which is controversial in Germany given the political situation in Pakistan. Do you also plan to talk about buying German submarines during your visit to Berlin? Or has your government already decided to buy French submarines instead?

Gilani: It will take some time. The army chief to whom I talked about this on Thursday told me that we are successfully moving forward. But this is related to all kinds of defense matters, not only about the issue you are talking about. But I can assure you, there is a defense cooperation with Germany, too, and we are already in the process of signing a memorandum with the Germans.

SPIEGEL: Mr. Prime Minister, thank you very much for the interview.