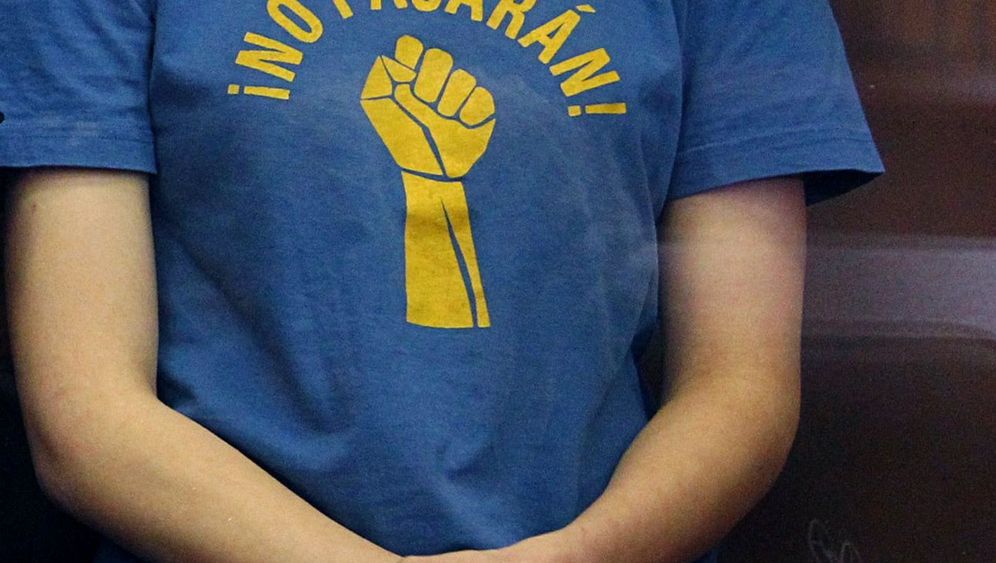 Photo Gallery: 'We Want a Revolution in Russia'

The 1,300 inmates of Pre-Trial Detention Facility No. 6, the only one for women in Moscow, refer to the concrete block at the southeastern edge of the Russian capital as the "Bastille." This is where the recently convicted activists with Pussy Riot are awaiting the outcome of their appeals proceedings, after being sentenced to two years' imprisonment for recording a video in which they sang "Mother of God, drive Putin out" in one of the country's most important churches. If their appeal is denied, the three young women will be sent to a prison colony. At the moment, they are allowed visits from family members once every two weeks. Under a court order, their lawyers are allowed unlimited visits to their clients. Nadezhda Tolokonnikova, 22, is considered the protest group's political leader. She answered SPIEGEL's questions through one of her lawyers.

SPIEGEL: Nadezhda Andreyevna, what is your daily life in jail like?

Tolokonnikova: It's bearable. Still, it's a Russian prison, with all its Soviet charm. There's been little progress there -- the prison system is still something of a mixture between military barracks and a hospital. We're woken at 6 a.m., then I have breakfast, then we're taken out to the prison yard. The rest of the day, I write. Or I read, today for example the Bible and the works of Slovenian philosopher and Marxist Slavoj Žižek. The lack of freedom of movement doesn't constrict the freedom of thought.

SPIEGEL: Do you regret your actions in Moscow's Cathedral of Christ the Savior?

Tolokonnikova: No, I regret nothing. I take a matter-of-fact view of our situation, and I see positives and negatives. Ultimately, I think the trial against us was important, because it showed the true face of Putin's system. This system delivered a verdict on itself, by sentencing us to two years in prison although we committed no crime, and of course I'm glad about that.

SPIEGEL: You have a four-year-old daughter, and you must have known going into your performance in the church that arrest was a real possibility. Wasn't that irresponsible toward your child?

Tolokonnikova: If you're afraid of wolves, you shouldn't go into the forest. I'm not afraid of wolves. I'm fighting for my daughter to be able to grow up in a free country. Legally, the court should have been able to convict us of no more than a misdemeanor. The criminal trial is Putin's personal revenge, and no one can predict how and when an authoritarian system will exact revenge.

SPIEGEL: Some see you as heroes, taking a creative approach to challenging Putin's rigid political system. Others consider your actions tasteless. While pregnant, you took part completely naked in a group sex event at Moscow's Biological Museum to mock the Kremlin's desire to increase Russia's birth rate.

Tolokonnikova: Everyone has his or her own taste. Our performances are modern art and only experts can assess whether what we do is tasteless. Anything else is simply the expression of subjective opinions.

SPIEGEL: What do your parents think of these performances?

Tolokonnikova: My father refused to talk to me for two months after the performance at the Biological Museum -- because I hadn't invited him to be part of the audience. Since then, he's been there for nearly every action I've taken part in. And my mother recently stated publicly that she supports utterly and completely my fight for Russia's freedom. So I don't have any problems with my parents.

SPIEGEL: You started as part of the artists' collective Voina, which means "war." Against whom are you waging war?

Tolokonnikova: The actions of the artists' collective Voina are a test of strength in the conflict between government and society. That was the first time that artists took up opposition to the authoritarian government in such a fundamental and highly public way.

SPIEGEL: What does Pussy Riot hope to achieve?

Tolokonnikova: A revolution in Russia.

SPIEGEL: And what kind of Russia do you wish for?

Tolokonnikova: One that unfortunately I'm going to have to wait a long time for. But one thing is certain: I want to destroy the things I consider the greatest evils. And I'm doing this by putting my ideas of freedom and feminism into practice.

SPIEGEL: Do you love your country?

Tolokonnikova: I love Russia, but I hate Putin.

Tolokonnikova: Putin's omnipotence is an illusion. That it's not a limitless thing is just as obvious as the fact that his propaganda machine exaggerates the president's power. Putin is dependent on the West roughly to the same degree that the West has an interest in exaggerating his power. In reality, the president is small and pitiful. You can see that in his actions both as a person and as a politician. If a leader feels confident, how can it even cross his or her mind to deal with three young opposition activists this way?

SPIEGEL: Your performance and your arrest have drawn the world's attention to human and civil rights in Russia, far more than the recent murders of journalists or the introduction of a number of repressive new laws have. Why is this?

Tolokonnikova: Because our performance was not trivial. It took up the confrontation between government and society, in a religious, political and social context. The trial against us revealed the regime's repressive character. Putin's system is collapsing. It's not suited for the 21st century -- it's more like something out of tribal societies and dictatorial regimes of the past. It's incapable of explaining why three political activists have to be thrown into prison just because they used the Cathedral of Christ the Savior as the location for a video performance and uttered a few powerful words against the system.

SPIEGEL: Are you enjoying the acclaim from the West?

Tolokonnikova: We're glad for all the support we get.

SPIEGEL: If we understand your performances correctly, they are not only directed at Putin, but are also anti-capitalist. In a conversation with SPIEGEL last year, Voina activist Oleg Vorotnikov justified stealing food on the grounds that there is a fundamental right to sustenance.

Tolokonnikova: Yes, we're part of the global anti-capitalist movement, which consists of anarchists, Trotskyists, feminists and autonomists. Our anti-capitalism is not anti-Western or anti-European. We see ourselves as part of the West, and we're a product of European culture. The shortcomings of consumer society do disturb us, but we're not looking to destroy consumer society. Freedom is at the core of our ideology, and our concept of freedom is a Western one. This is a fight for the right definition of freedom.

Tolokonnikova: Russian women are caught somewhere between Western and Slavic stereotypes. Unfortunately, Russia is still dominated by the centuries-old image of the woman as keeper of the hearth, and of women raising children alone and without help from men. That image continues to be cultivated by the Russian Orthodox Church, which turns women into slaves, and Putin's ideology of "sovereign democracy" aspires in the same direction. Both reject everything Western, including feminism. But Russia, too, had a tradition of a Western-style women's liberation movement, which Stalin smothered. I hope it rises again -- and that we can help that happen.

SPIEGEL: Would you choose a religious space as a location for a political demonstration again?

Tolokonnikova: We're artists, and artists never repeat themselves. Not because we're afraid of punishment, but to be true to our artistic principles.

SPIEGEL: Can you understand that many Russians feel their religious feelings have been hurt, when you perform a wild dance in front of a church altar?

Tolokonnikova: The video clip and the accompanying text, which describes the political motivations behind our performance, were hardly the kind of thing to hurt religious feelings. It's the distorted picture presented in the state-run media that changed the situation, accusing us of religious hate. I'm sorry it has come to that. Ultimately, both we and our critics have become victims of Putin's propaganda machine.

SPIEGEL: Do you welcome the fact that people in Russia are now toppling crosses, supposedly in a show of support for you?

Tolokonnikova: Definitely not. That's not something we're happy about. Pussy Riot has never acted against religion. It's Putin's ideologues who have stuck the label of religious hate on us. Our motivation was purely political.

SPIEGEL: In your closing argument at the trial, you quoted from the Old and New Testament. Are you yourself religious?

Tolokonnikova: I don't believe in God. But I do see religion as an important part of culture.

SPIEGEL: Church leaders have campaigned for leniency and mercy for Pussy Riot. Would you still describe the church's patriarchs as "bitches," as you did in your performance?

Tolokonnikova: The church didn't call for leniency until the verdict had already been announced. If they meant it honestly, why didn't they say something before? We don't believe in the church's honest intentions, just as the prosecution's witnesses didn't believe our apology is meant honestly. Also, the word "bitch" wasn't aimed at the patriarchs. We only used it as a filler word.

'I'm Glad Our Fight Will Continue'

SPIEGEL: In court, you compared yourself with Fyodor Dostoyevsky and Alexander Solzhenitsyn. Has the fame gone to your head? Solzhenitsyn spent eight years in a gulag. And Dostoyevsky was sentenced to death, then pardoned at the last minute at the place of execution and exiled instead.

Tolokonnikova: We don't want to compare ourselves to the work of Solzhenitsyn or Dostoyevsky. But we're concerned with precisely this attitude on the part of the government toward voices of dissent.

SPIEGEL: More than a few fellow opponents of Putin think you went too far with your performance in the cathedral. Alexey Navalny, probably Russia's most popular opposition politician at the moment, told SPIEGEL he considered the performance at the cathedral "stupid". Have you divided the opposition?

Tolokonnikova: Navalny praised our performance at Red Square, where we called Putin a coward. Clearly Navalny doesn't entirely understand the connection between the performance in front of the Kremlin and the one in the Cathedral of Christ the Savior. Our goal is in fact a divide, but not of the opposition. We want to rouse the part of society that has remained politically apathetic and has preferred not to work actively for civil rights, but rather to stay comfortably at home. What we see right now is a divide between the government and a silent majority of Russians.

SPIEGEL: Many Russians have called for a tougher punishment than the two years to which you were sentenced.

Tolokonnikova: There is a clear correlation between the trial against us and Putin's approval ratings. The most recent polls show his popularity dropping.

SPIEGEL: Is there anything that has particularly pleased or upset you in the months since your arrest?

Tolokonnikova: The overwhelming reaction to what we did was a pleasant surprise. The government's reaction to our performance was to be expected, since after all we're dealing with an authoritarian system. But I've been pleased with the support from friends and other like-minded supporters, despite the threat of years in prison that we're facing. I'm glad that our fight for our ideas and values will continue.

SPIEGEL: You've submitted an appeal. Do you expect a reduction to your sentence?

Tolokonnikova: I don't care about that.

SPIEGEL: You're not afraid of life in the prison colony?

Tolokonnikova: It's not me but the authorities who must be afraid.

SPIEGEL: What will you do when you're released from prison? Will you go on a global tour, release albums, turn your fame into money? Or will you go into politics?

Tolokonnikova: As long as this authoritarian system exists, there's little point in thinking about such things.

SPIEGEL: Nadezhda Andreyevna, we thank you for this interview.

The questions to Tolokonnikova were posed by Matthias Schepp. Translated from the German by Ella Ornstein.
Mehr lesen über
Russia Human Rights in Russia
Verwandte Artikel