Prokhorov: I apologize. I only slept for four hours. I returned from a business trip to Moscow late yesterday evening, then I went out. 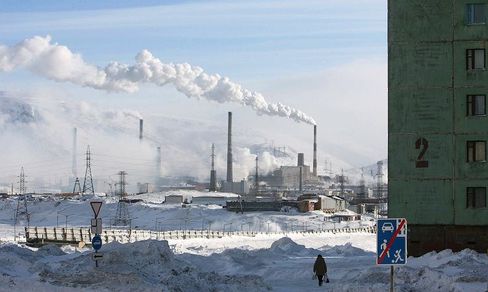 Norilsk nickel mine: Prokhorov made a huge profit -- an estimated $7 billion (€5 billion) when he sold his shares in the mine, based north of the Arctic circle, a year and a half ago, shortly before markets collapsed.

SPIEGEL: Is this what the life of Russia's richest man is like: traveling and parties?

Prokhorov: I work hard and I party hard. We had guests constantly when I was a child. As a result, I love company, and sometimes even loud company.

SPIEGEL: And you can afford it. Were you pleased when Forbes placed you at the top of its list of Russia's wealthiest people, with an estimated fortune of $9.5 billion (€6.8 billion)?

Prokhorov: As a businessman, I see money as a tool to implement my strategy. It's a benchmark of success as well. But the main thing is that everything I do gives me pleasure, and that I get to share this pleasure with others. That's my business principle as well as my life philosophy.

SPIEGEL: How does the government's growing influence on the Russian economy fit into your entrepreneurial philosophy?

Prokhorov: In the current global economic crisis, nationalization is certainly not a phenomenon that's restricted to Russia. In fact, I would even venture to say that of all countries, ours is strongest at promoting the market economy.

Prokhorov: It's true. The government could easily do more and acquire, let's say, up to 30 percent in companies that are globally competitive. But that would be under the condition that private shareholders could buy back those shares when the crisis is over. Many companies in debt are now asking the government to acquire shares. However so far, the government has been tough on this issue and turned them down.

SPIEGEL: The circumstances were reversed a few years ago, when the oligarchs lent money to the government and were considered king-makers.

Prokhorov: The term "oligarch" hasn't been appropriate for a long time. At the time, the economy had considerable influence on politics. Those days are over.

SPIEGEL: That's something Russian Prime Minister Vladimir Putin likes to demonstrate. What were you thinking when he paraded aluminum entrepreneur Oleg Deripaska in front of cameras like a first-grader, just because he hadn't paid wages on time?

Prokhorov: This crisis is like a state of emergency, in which some decisions have to be made very quickly and outside of standard operating procedure -- using manual controls, if you like. It's like a fire alarm -- so of course, emotions are running high. Government leaders in other countries are taking similar steps. They too want to preserve social stability. Besides, the nonpayment of wages is a criminal offence in Russia.

SPIEGEL: Are we under the wrong impression, or do businessmen who don't listen to the Kremlin face an unpleasant choice: Either exile in London or they are sent to Siberia, as was the case with the imprisoned former oil magnate Mikhail Khodorkovsky?

Prokhorov: Please consider that the Russian market economy is young and that the elite is still forming. This is a painful process but at least it's not a violent one. Especially considering that Russia is the only large country that has lost its elite twice during the 20th century: during the October Revolution in 1917 and in 1991 when the Soviet Union came to an end. We need to work on overcoming the divide between the people and the economic elite. Businesspeople -- and that includes me -- are certainly not free of sin. In any case, that is also mirrors the condition of the whole of society.

SPIEGEL: But you personally are not exactly contributing to social cohesion by wearing €200,000 ($280,000) watches or, as rumor has it, offering to buy the Villa Leopolda on the Côte d'Azur for close to half a billion dollars.

Prokhorov: Glamour was in style all over the world for 15 years and now modesty is far more fashionable. And I am not going to buy the villa in question. But of course, I have nothing against wealth. The more wealthy people we have, the better it is for Russia. And because many Russians are still poor, being rich also comes with certain responsibilities. Nevertheless, it wasn't just a select few who did well in the boom years. There are fewer mentions of the fact that millions of ordinary Russians were able to improve their standard of living too.

SPIEGEL: But now the global crisis is jeopardizing this. Why is Russia more strongly affected than other emerging economies, like China or India?

Prokhorov: Because about 30 percent of our companies are not competitive. And because we place too much emphasis on fighting inflation instead of stimulating demand. The fact that the ruble is tied to the price of oil prevents us from pursuing other important goals: preserving our gold and currency reserves, and achieving export revenues to better our budgets.

SPIEGEL: How can Russia change this?

Prokhorov: We don't have to reinvent the wheel, we just need to develop an innovative economy that utilizes our own competitive advantages -- such as our raw commodities. It isn't enough to simply take the oil, gas, copper and nickel out of the ground and sell it. Using modern technologies, we should also be processing these resources so that we can move farther up the value-added chain. President Dmitry Medvedev and Premier Putin understand this need -- better than many businesspeople actually.

SPIEGEL: Can you cite an example of innovation from within your own business?

Prokhorov: Yes, in fact it's one from Germany. We spent more than €20 million ($28 million) to purchase Optogan, a Dortmund-based company that develops state-of-the-art luminous diodes. It was founded by students of Zhores Alferov, a Russian Nobel laureate in physics. We are now building two production plants, and we expect to be pulling in orders worth around a billion dollars soon. The investments are relatively small but the profits and the impact are gigantic.

SPIEGEL: You have suggested that Russian companies take advantage of the crisis to expand overseas. How is this supposed to work, given that many are weighed down by a mountain of debt?

Prokhorov: We should have used the $200 billion (€143 billion) of Russian currency reserves, that we used to shore up the ruble, to improve our position in the world market. This is a good opportunity, foreign companies can now be had at relatively low prices, even in areas that have previously been closed to Russians before the crisis -- such as information technology. The window of opportunity is wide open.

SPIEGEL: Which companies have you set your sights on?

Prokhorov: Of course, I can't name any names. But our holding company has clear criteria. First we invest in competitive companies within Russia. These companies then look at diversifying internationally and they will scope out 20 to 30 candidates for a takeover bid. But we're only interested in what fits our strategy, which usually means companies that can achieve a market capitalization of at least a billion dollars.

SPIEGEL: Are you also considering Germany?

Prokhorov: An investment in the energy sector is a possibility there. Through TGK-4, a company we purchased for more than a billion dollars, we operate 25 power plants in the European part of Russia.

SPIEGEL: In Germany some find Russian business expansion sinister. You don't exactly have the best reputation.

Prokhorov: It can't be separated from the image of our country. We often share the same opinions with our partners in the West, but we express them more vehemently. You have to understand: Every country has its complexes, including Germany. Our complex is the eternal search for the answer to the question of whether or not we are a major power. I see this as the logical consequence of the breakup of the Soviet Union. Besides, the West and Russia don't listen to each other enough.

Prokhorov: If the European Union is serious about rapprochement with Russia, it should lift visa restrictions, for example. They don't have to be afraid. It would help people in the East and West to get to know each other better and reduce prejudices. The criminals come anyway.

SPIEGEL: Will Russia and Europe even play a decisive role in the future global economic order?

Prokhorov: A good question. The crisis is accelerating something that was already recognizable. The world's gross national product is increasingly being earned in the rising BRIC nations -- Brazil, Russia, India and China. America has huge problems, but at least -- unlike Europe -- it is not addressing them decisively, not in a half-hearted way.

SPIEGEL: At least Russia has raw commodities that will also be in demand in the future. Will you continue to invest in this sector?

Prokhorov: Of course. Our company, Polyus Zoloto, is in the process of buying the Kazakh firm, KazakhGold. This will result in a group that will have the second-largest or third-largest gold reserves in the world. We have cash and no debt and, once the takeover has been processed, we want to expand further. I think commodities prices will rise. I am certain of that. However, I can't say whether -- or when -- they will reach pre-crisis levels.

SPIEGEL: But you became Russia's richest man by getting out of one commodity sector, the nickel business, at the right time -- that is, shortly before the markets collapsed. You sold your shares in Norilsk Nickel a year and a half ago. You received an estimated $7 billion (€5 billion) for the shares, as well as a 14 percent share in Deripaska's aluminum giant, RUSAL. Is that luck or skill?

Prokhorov: I'm no Nostradamus. However, I did expect the massive real estate crisis in the United States to affect all other branches of the economy, including the commodities sector. Of course, a little luck was also involved.

SPIEGEL: As a minority shareholder of RUSAL, what are your plans?

Prokhorov: I am in favor of merging RUSAL and Norilsk Nickel. This is the only way to compete with industry giants like BHP Billiton or Rio Tinto. The $4.5 billion (€3.2 billion) loan that the government issued to RUSAL could be converted into its own a stake.

Prokhorov: Perhaps, but it is necessary. In that sort of an alliance, each major shareholder would own no more than 15 to 20 percent. These strong shareholders would have to bring in independent management. Which would be a radical new strategy for the Russian economy.

SPIEGEL: What is your current relationship with your business partner of many years, (Vladimir) Potanin? You had quarreled with him.

Prokhorov: A neutral relationship. We meet once every quarter.

SPIEGEL: There are people who claim that Potanin was behind your having made headlines two-and-a-half years ago. You were arrested at the French ski resort of Courchevel on charges of procurement.

Prokhorov: One of these days I'll figure out how it came to that. At any rate, the accusations were absurd. We had a party. That was all.

SPIEGEL: Perhaps you should even be grateful to the French police. After all, the incident led to the falling-out with Potanin and the well-timed sale of your Norilsk Nickel shares.

Prokhorov: In fact that episode was a catalyst for our falling-out. But the deeper reason lay in our different strategies. Potanin wanted to invest everything in nickel, but I wanted to diversify.

SPIEGEL: What were your experiences in the French prison?

Prokhorov: You know, I like to engage in unusual sports: kickboxing, trampoline jumping, heli-skiing and jet-skiing -- and I like to take things to the limit. I'm an extremist, especially in my private life. That's why I felt that being arrested was interesting from a psychological point of view. It reminded me of the five days I spent in a military jail during my military service in Soviet days. It was because I had left the barracks without permission.

SPIEGEL: Mikhail Dmitriyevich, we thank you for this interview.