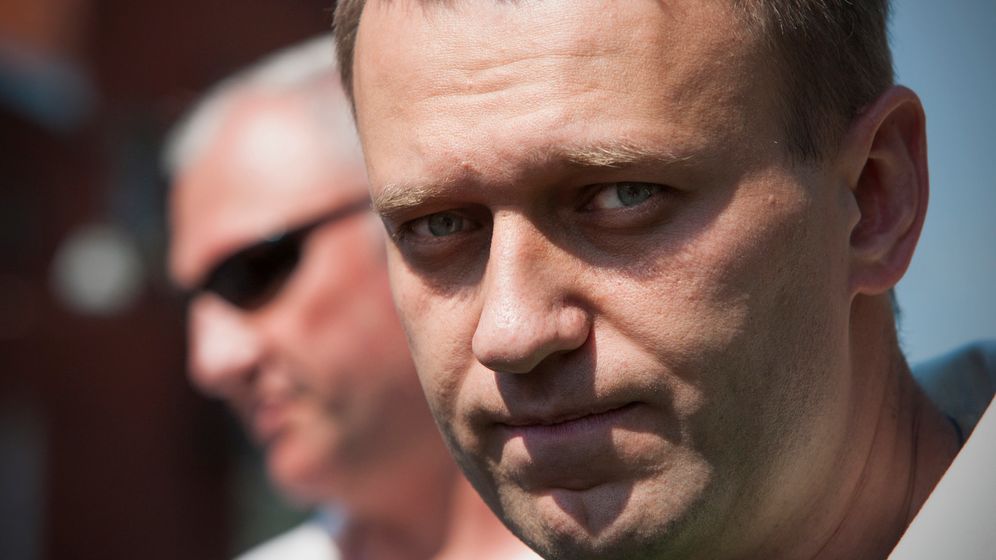 Alexi Navalny's office is located in a courtyard in downtown Moscow. In one corner of the room, next to a Russian flag, hangs a large photo of Russian President Vladimir Putin greeting former Libyan leader Moammar Gadhafi in an extremely friendly manner. This comical image belies the fact that the Russian opposition is deadly serious: It intends to bring down Putin.

Last Thursday, Alexei Navalny, a 36-year-old lawyer and blogger, met with SPIEGEL for an interview. Only a few minutes earlier, the chairs in front of his desk had been occupied by two officials from the Investigative Committee, a government agency that is directly subordinate to Putin. They were questioning him on corruption charges.

On Friday afternoon, he rushed to Moscow's Khamovniki district court to hear the verdict in the trial against the punk band Pussy Riot. When he left the courtroom that evening, he supplemented his earlier remarks with further comments to SPIEGEL. Navalny says he is now convinced that "Putin has decided to put all his opponents behind bars." He himself could be next.

SPIEGEL: Mr. Navalny, the women from Pussy Riot have each received a two-year sentence in a labor camp. What does this trial's outcome mean for Russia?

Navalny: It was clearly a political show trial. As an Orthodox Christian, I can only see this as a repugnant, downright heathen act of revenge. It is carried out in the name of Christianity, but the girls did not desecrate any icons and they did not destroy anything. It reminds me of the Inquisition during the Middle Ages.

SPIEGEL: Many Russians don't consider a church to be the right place to hold a political demonstration. What is your position on this?

Navalny: I find the action itself despicable. I would be outraged if my daughter, who is 11, were to take part in something like this in a few years' time. Indeed, that's why I also said that the girls did something stupid. But stupidity is not a crime.

SPIEGEL: So why are you standing up for Pussy Riot?

Navalny: I cannot do otherwise, even if it incurs the ire of many of my supporters. I'm concerned with protecting the legal system. The girls have merely committed a minor offense, not a crime. They present no danger to society. 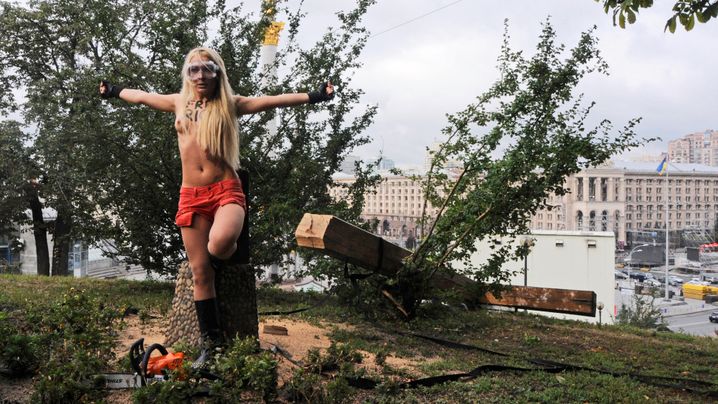 SPIEGEL: Putin apparently sees the women as a threat.

Navalny: He has miscalculated. Pussy Riot only became a threat thanks to him. It was initially only a moderately successful performance that received far less of a response than the brilliant action on Red Square in January. At the time, Pussy Riot called Putin a coward. Then, two of the three activists were arrested shortly before the presidential election (in March).

SPIEGEL: Is it a coincidence that it was women who carried out these actions?

Navalny: When men are arrested without any legal basis and for political reasons, it's merely a routine, everyday occurrence in Russia, and hardly anyone has any sympathy. But until recently, everyone deluded themselves into thinking that the Kremlin wouldn't dare put women behind bars. The women from Pussy Riot have become symbols partly because this cliché has been shattered.

SPIEGEL: How do you see the role of women in the protest movement?

Navalny: Politics is traditionally a male domain in Russia. Until now, women have only been accessories. Now, female protest groups are emerging -- not because men came up with the idea, but through their own efforts. That's something new for Russia.

SPIEGEL: What did Putin expect to achieve with this trial?

Navalny: The Kremlin used the performance in the church to take revenge for the appearance on Red Square. Furthermore, it succeeded in taking the conflict between the government and the opposition movement and obscuring it behind the confrontation between the Church and the opposition. The idea was for the patriarch to stand in the crossfire, not Putin. That's why photos also appeared in the press of the patriarch wearing an expensive watch, instead of pictures of Putin's palaces.

SPIEGEL: Did Putin initiate the trial, not the patriarch?

Navalny: Without a doubt. The Church understands what problems it is now saddled with. The Kremlin also wanted to drive a wedge into the opposition because by no means every opponent of Putin approved of the action. The Putin team also felt certain that there would be no major outcry abroad.

SPIEGEL: But there has been an outcry. Just over the past few days, German Foreign Minister Guido Westerwelle and German Chancellor Angela Merkel's adviser on Russia have expressed their support for Pussy Riot.

Navalny: Putin and his advisers don't understand the power of public opinion in the West. They believe in conspiracy theories and that someone is orchestrating a malicious campaign against Russia. They don't realize that even conservative politicians have to react when newspapers and artists express their concern on such an issue.

SPIEGEL: To what extent does pressure from the West help?

Navalny: It actually helps a great deal. Our political leaders often talk about Russia taking an independent path, but they like to live like people in the West. Prime Minister Dmitry Medvedev can no longer attend concerts by his favorite group Deep Purple without having to fear that the musicians will wear T-shirts with Pussy Riot written on them.

SPIEGEL: Putin does not exactly have a reputation for allowing appeals from the West to influence him unduly.

Navalny: Correct. But he pays close attention to public opinion and governs according to opinion polls. If necessary, he can be very adaptable.

SPIEGEL: There were demonstrations around the world after the Pussy Riot verdict, but in Moscow it was relatively calm. Why?

Navalny: We've grown accustomed to injustice in Russia. People are constantly being arrested unlawfully. Just take the 13 protesters who were arrested because of the anti-Putin demonstration on May 6. Ten of them are still in custody. They deserve as much attention as Pussy Riot.

SPIEGEL: How does the verdict change the political landscape? What will happen to Putin's predecessor Medvedev?

Navalny: Medvedev will remain in office. I don't know why, but Putin has made a ritual out of humiliating Medvedev. Sometimes I even feel sorry for the prime minister. Putin has reversed all the liberalizing reforms carried out by his predecessor. The fact that the political climate has grown harsher is something I even notice in my daily work as a legal representative of minority shareholders in large, state-owned companies.

SPIEGEL: You're a member of the supervisory board of Aeroflot and have denounced corruption at oil giant Rosneft.

Navalny: Under Medvedev, we were even able to win cases against powerful state-controlled companies like pipeline operator Transneft. After Putin's return to the Kremlin, this stopped practically overnight. The same courts now rule against us.

SPIEGEL: Despite the Pussy Riot trial, the protest movement appears to have lost its momentum. What mistakes has the opposition made?

Navalny: People have often predicted our decline in the past, but then suddenly tens of thousands take to the streets again. Since we have been criticizing the Kremlin for a lack of legitimacy after the election fraud, we ourselves have to gain legitimacy by electing a leadership, in a competitive process carried out via the Internet. We are currently doing this. I'm running for a position.

SPIEGEL: Why haven't you developed a political platform yet?

Navalny: Because we don't need one. We're not establishing a unity party with a joint program. In Russia an authoritarian leader is running the country. You can't fight Putin with elections because he controls them. That's why demonstrations are the most effective approach. Unfortunately Russia has sunk to this primitive level.

SPIEGEL: At the big demonstration on Dec. 24, you urged protesters to march on the Kremlin if the government didn't meet the opposition's demands. Does Russia need reforms or a revolution?

Navalny: If genuinely free new elections were held, that would be a revolution, wouldn't it? I'd be satisfied with that.

SPIEGEL: There's no talk of new elections. On the contrary, Putin has just instituted repressive measures.

Navalny: Yes, but he's also a pragmatist. If we allow him now to govern with Belarusian-style repression, that's what he'll do. If we don't allow him to do so, he won't do it.

SPIEGEL: How do you intend to achieve this?

Navalny: We have to take to the streets in great numbers. Foreign countries should impose sanctions against Putin's corrupt network. But we'll probably wait in vain for that to happen.

SPIEGEL: Who would win if free elections were held today?

Navalny: Putin is still very popular. His Soviet-style party would come in with around 20 percent. The left would be stronger than it is today. Pro-Western liberals would also be elected to parliament, although Russia is not a liberal country. Many votes would go to moderate nationalists, just as they also have parliamentary seats in Western Europe.

SPIEGEL: Are you a nationalist?

Navalny: I'm a realist. Since Russia has the largest number of illegal immigrants, second only to the US, and immigrants from Central Asia bring in drugs, I'm calling for a visa requirement for all those wonderful people from Tajikistan and Uzbekistan. Is Obama a nationalist because he hasn't reversed the construction of the fence on the Mexican border?

SPIEGEL: In a manifesto by the National Russian Liberation Movement, which you co-founded, you call for "throwing out all those who come into our home but refuse to adhere to our laws." That sounds like Marine Le Pen, the leader of France's far-right National Front.

Navalny: I don't see any contradiction there to traditional European values. And I wouldn't have any objection to a Le Pen-style party in Russia. I'm for a market economy, but also for law and order. Ms. Merkel and the EU also don't allow 140 million Russians to enter their countries without a visa. I would, by the way, do more for guest workers than most liberals. Many guest workers eke out a nightmarish existence as slaves without rights. With the visa requirement, they would be granted rights in addition to obligations.

SPIEGEL: Why did you take to the streets alongside neo-fascists in November?

Navalny: Ninety-five percent of them weren't neo-fascists. Xenophobia is fairly widespread in Russia. We can choose to force them to go underground or integrate the moderates.

SPIEGEL: But by doing so you show sympathy for their causes.

Navalny: No. Anyone who commits a xenophobic crime has to be brought to justice. We have to re-educate the others.

SPIEGEL: The US news magazine Time ranks you as one of the 100 most influential people in the world. What have you managed to change in your country?

Navalny: Of course I'm flattered, but it's a bit of an exaggeration. In an ironic twist of fate, I first heard about it while I was being questioned at a police station in the southern Russian city of Astrakhan.

SPIEGEL: You now have to stand trial on corruption charges. Are you afraid for your family?

Navalny: Certain people have wanted to put me behind bars for a long time now. That's part of my work. If I were afraid, I couldn't do what I do.

SPIEGEL: Mr. Navalny, thank you for this interview.