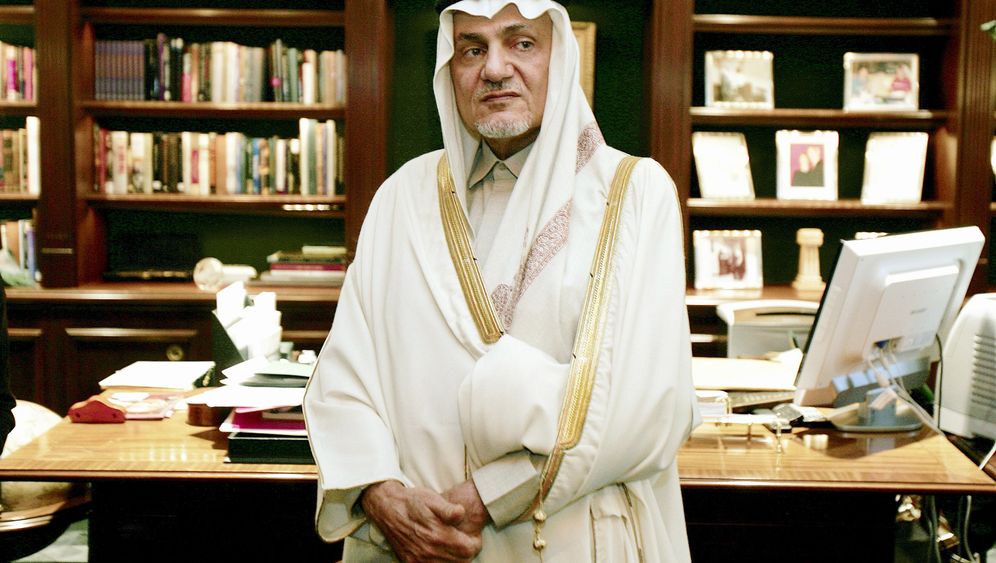 SPIEGEL: Your Highness, a few days before the publication of the US State Department's secret cables, US Foreign Minister Hillary Clinton called America's most crucial allies to warn them. Did you get a phone call too?

Turki: No, I am not the foreign minister.

SPIEGEL: But you did serve Saudi Arabia, Washington's most important ally in the Arab world, as ambassador to the US. Now, intimate details of that partnership have been revealed. What consequences will that have for your relations with the US?

Turki: America's credibility and honesty are the victim of these leaks. People, including officials, will no longer speak to American diplomats frankly.

SPIEGEL: What does that mean for your country?

Turki:: We have overcome more serious issues in the past. In 1945, for instance, my grandfather, King Abdulaziz, met with President Franklin D. Roosevelt aboard the USS Quincy. Roosevelt tried to convince King Abdulaziz to support the aspirations of the Jewish people suffering in Europe and allow them to migrate to Palestine. My grandfather objected. Why should the Palestinians suffer for what the Nazis had been doing? So they agreed that Roosevelt would not take any action on this issue without consulting his Arab friends.

Turki: As it turned out -- from papers which were subsequently leaked -- Roosevelt's successor Harry Truman had a Jewish poker friend. This man called him up and said: "Listen Harry, you better do this for old times' sake."

SPIEGEL: And so the US recognized Israel without informing the Saudis?

Turki: All of the former commitments went up in the air. The Kingdom was definitely affected by this and felt let down. But we had different interests as well: the development of oil resources, the anti-colonial struggle against the British and the French, the coming communist menace. So, of course, we continued our relations with the US while expressing our public opposition when the occasion arose.

SPIEGEL: And this is what you expect after the WikiLeaks revelations, too? Public opposition but the continuation of relations?

Turki: Our ties are strong and strategic. They will continue. An example of America helping us was the Iraqi invasion of Kuwait. Their soldiers were willing to fight and die. We won't forget that. The US is also the only country with the ability to say no to the Israelis. America is the only game in town. The Europeans are sitting on their backside and saying: America, you go first, we'll follow. The Europeans are not going to stand up for our rights in Palestine or Lebanon, neither will the Russians nor the UN. America will. And that is why our strategic relations with America are so important.

SPIEGEL: We now know from the US diplomatic cables that Israel and Saudi Arabia have one essential common interest: to keep Iran from acquiring a nuclear bomb. The dispatches show that the highest echelons of your leadership do not trust the Iranians on the nuclear issue.

Turki: Nor should we. We have always told the Iranians to be more sensible on this matter. But if you want Israel, Turkey and Saudi Arabia to play with Iran, you first need to have a level playing field. There should be a reward regime and a sanctions regime, including military sanctions, for the countries who join a Middle East zone free of weapons of mass destruction. In addition, there should be a nuclear umbrella guaranteed by the five permanent members of the United Nations Security Council. This nuclear umbrella could provide Israel with protection.

SPIEGEL: According to the now published documents, King Abdullah has asked the Americans to put an end to Iran's nuclear program and to "cut off the head of the snake."

Turki: The WikiLeaks documents are a hodge podge of selectivity, inaccuracy, agenda pursuit and downright disinformation.

SPIEGEL: Is it not true that, should Israel launch an attack on Iran's nuclear facilities, Saudi Arabia would open its airspace to Israel?

Turki: I know these rumors. Most of them come from Israel.

SPIEGEL: There are people in Saudi Arabia who think the same.

Turki: Laymen maybe. I have dealt with these issues all of my life and I am telling you: Saudi Arabia would never accept to allow Israel to attack any country in the area whatever that country does.

SPIEGEL: Why don't you use your common fear of the Iranian bomb to make overtures to the Israelis?

Turki: Why should we? In 1981, Saudi Arabia proposed the acceptance of the borders of 1967 -- the King Fahd plan. Israel, however, invaded Lebanon. In 2002, then crown prince Abdullah again gathered the whole Arab world behind a peace plan, the so-called Abdullah Initiative. But what did Israel do? Nothing. No answer.

SPIEGEL: Men like yourself and Israel's Prime Minister Benjamin Netanyahu have the same fears concerning the Iranian bomb. You are of roughly the same generation and you both have studied in the US. Why don't you talk to each other?

Turki: Netanyahu capitalizes on the Iranian issue. He uses the threat from Tehran to marshal Israeli public opinion as well as global opinion. Iranian President Mahmoud Ahmadinejad does the same thing, by the way. On no other issue does he have as much support as on the nuclear issue. It is like two cocks fighting over the same hen.

SPIEGEL: Why, for the sake of peace, don't you take the risk? Why don't you just invite Netanyahu over to Riyadh?

Turki: I don't think we should. Our population would accuse us of succumbing to Israeli pressure. Israel's settlements -- which I call colonies -- would gain legitimacy if we spoke to Israel, wherever it might be.

SPIEGEL: Why is your position not accepted by the US -- your and Israel's principle ally?

Turki: The Israelis have worked harder, and in a smarter way, than we have to infiltrate the decision-making process in America. Whatever they want, they can easily find 300 Congressional representatives to support their proposal. We have no such speakers or spokesmen.

SPIEGEL: You can hardly blame the Israelis for this situation.

Turki: Absolutely. This is why the Israelis have beaten us, whether in America or in Europe. They have just been smarter.

SPIEGEL: Three weeks ago Saudi intelligence helped prevent a terror attack on Europe or America. You informed German officials of suspicious packages from Yemen. For the first time since Sept. 11, 2001, Saudi Arabia received positive headlines abroad in the connection with terror prevention.

Turki: There has been a fundamental change in intelligence and information work. When I was in intelligence, the rule was: If I give you a piece of information, then both of us would make sure that nobody knew about it. That's how we protected our sources. There has been a shift because of the increased availability of information. Today I can go on Google and find things for which I would have had to send out hundreds of agents before. WikiLeaks is a perfect example.

'Why Should the Taliban Negotiate in the First Place?'

SPIEGEL: You have personally met Osama bin Laden five times, most recently in the summer of 1990. If you were in charge of operations today, where would you look for him?

Turki: That is very easy. He is in the border area between Afghanistan and Pakistan. In the early days after 9/11, America searched for him from mountain to mountain, village to village, cave to cave. But then, suddenly, it stopped because it withdrew its assets from Afghanistan to Iraq. We need another campaign to search for him -- led by the United States but including all countries who have a bone to pick with bin Laden. Not just Saudi Arabia, but also Russia, China, India, Pakistan, Egypt, Spain and Indonesia.

Turki: Neither our means, nor America's nor those of any single country are enough for such a campaign. If the will is there to catch him, he can be found like Saddam was found eventually. But this determination is lacking. During his election campaign President Barack Obama promised to concentrate again on searching for terrorists. But now, General David Petraeus' philosophy foresees beating the Taliban militarily to bring them to the negotiating table. No one speaks about bin Laden anymore. This is where the campaign has gone wrong.

Turki: Only when bin Laden is eliminated one way or another will the US and the rest of the world be able to declare victory. Once you can declare victory, withdrawing your troops from Afghanistan becomes legitimate.

SPIEGEL: NATO, however, has just recently decided to withdraw in 2014.

Turki: Then why should the Taliban negotiate in the first place? All they have to do is wait.

SPIEGEL: You were head of Saudi Arabia's General Intelligence Directorate for 24 years before stepping down on August 31, 2001. Exactly 11 days later, al-Qaida struck in New York and Washington. Do you blame yourself for not having prevented the attacks?

Turki: Not just me. The whole world should regret not having done more to get these people. Our mistake was to deal with this new type of a terrorist organization the way we had dealt with previous organizations such as Baader Meinhof or the Red Brigades. We used to exchange our information only bilaterally, we did not use the the collaborative approach as we did in the recent case of the Yemen bombs. All this although by May 2001 there were warning signs from all sides that something was going to happen. But even within the US, the FBI and the CIA were not exchanging their information. So, of course, we did not do enough.

Turki: I was in Jeddah. Then-King Fahd was giving a lunch for Sudanese President Omar al-Bashir. One of the princes sitting close to me told me he had just got a text message: An airplane had hit one of the Twin Towers. At first I thought: maybe an accident? But when the second plane hit, I obviously wanted to get home to watch CNN.

SPIEGEL: Did you immediately make the connection to bin Laden, to Saudi Arabia?

Turki: No. My inclination at the time was that the attack could have Balkan derivatives. I thought about Bosnia, Kosovo, the American involvement there.

SPIEGEL: But it was your boys instead.

Turki: When the Americans announced their names, my instinct was to accept it as a fact. I had no reason to question the sincerity of that report. I am not a skeptic. I have never doubted that it was bin Laden, nor was the operation too complicated for someone like bin Laden to do it. But, "your boys?" These people were Saudis, but they were trained outside the country. Their life within the Kingdom was relatively eventless. Two of them were teachers, one was unemployed. As I have said before: al-Qaida came out of the hills of Afghanistan, not from the deserts of Saudi Arabia.

SPIEGEL: Still, it is your country which is now most associated with the name of al-Qaida.

Turki: It is a burden that will weigh on us forever. It will be an issue of guilt and regret for the rest of our lives, if not for those of our children and grandchildren.

SPIEGEL: Your Highness, thank you very much for this interview.