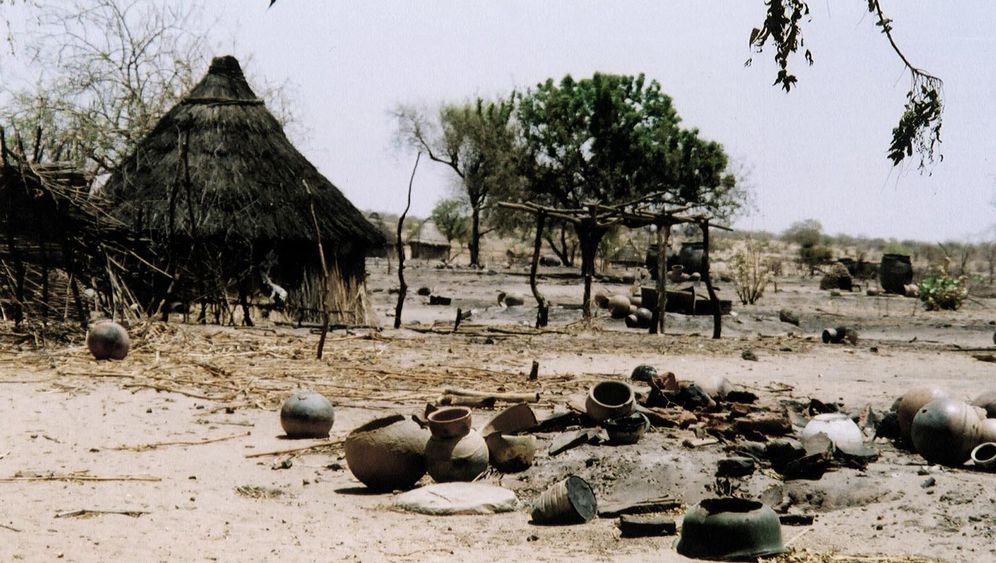 According to United Nations estimates, about 300,000 people died and at least 2 million were forced to flee their homes in Sudan's Darfur region between 2003 and 2008. In the years of forced displacement and torture, the political responsibility lay with Sudanese President Omar al-Bashir, the first sitting head of state against whom the International Criminal Court has issued an arrest warrant. The court indicted Bashir on five counts of crimes against humanity and two of war crimes.

The president of the largest African country, as commander-in-chief of the armed forces, stands accused of being responsible for the bombing of numerous villages. He is also accused of having armed and paid the Arab mounted militias known as the Janjaweed, so that, after the bombings, they could murder people in the settlements, drive them out and systematically rape the women. So far, however, Chief Prosecutor Luis Moreno-Ocampo has not gained the support of a majority of the judges in The Hague in his efforts to prosecute Bashir for genocide.

Bashir came to power in a non-violent coup about 21 years ago, and in 1993 he was formally confirmed as president. In 2005, he agreed to a treaty brokered by the West, which ended the decades-long civil war in the country's Christian and animist south. Under the agreement, the south will decide, in a January 2011 referendum, whether to secede from the rest of the country. The population is expected to choose independence.

In the Muslim north, however, Bashir has in fact benefited from the arrest warrant. The Arab League and the African Union have come to his support, and the indictment has provided him with a defiant burst of sympathy within the population. Observers expect Bashir to be confirmed as president in the elections in mid-April.

In an exclusive SPIEGEL interview, Bashir describes the accusations against him as "baseless," and "conspiracy controlled from abroad."

SPIEGEL: Mr. President, you are the first sitting head of state against whom the International Criminal Court has issued an arrest warrant for war crimes and crimes against humanity. In addition, genocide charges are being considered against you. More than 100 countries, or about half of the world, are required to execute the arrest warrant. How do you respond to these serious charges?

Bashir: It is simply not true that 100 or more countries have taken a stand against Sudan. Many African nations are demanding that the International Criminal Court reconsider the decision, and some countries are even threatening to withdraw from the tribunal because of it.

SPIEGEL: More and more countries, including South Africa, are distancing themselves from you.

Bashir: We have excellent relations with South Africa. The vice president visited us, and we have arranged for the president to visit us after our elections in April. I have received a personal invitation from Venezuela, which I will also accept after the election. Yes, there are problems, mainly with the European countries. But the strangest behavior is coming from the United States, which insists on execution of the arrest warrant, and yet never recognized the International Criminal Court.

SPIEGEL: You seem to show little concern for your safety here, despite the persistent rumors that you are threatened by a special commando that could execute the arrest warrant and take you to The Hague.

Bashir: I feel completely safe in my country. On the contrary, the International Criminal Court has even done me a service, one that I could never have dreamed of. My popularity at home has unexpectedly shot up as a result of this arrest warrant.

SPIEGEL: Nevertheless, unspeakable crimes have occurred in the troubled Darfur region. According to the indictment, you controlled the notorious Janjaweed mounted militias, which systematically raided villages in Darfur and massacred residents.

Bashir: Those are all baseless accusations. From the beginning, it was a conspiracy controlled from abroad that supported the rebellion in Darfur, politically, militarily and financially. At first, these foreign manipulators backed the rebels in southern Sudan. Then our troops regained the upper hand and the conflict abated. But then the same backers supported the rebels in Darfur, taking advantage of traditional conflicts between farmers and herders, which occur regularly during drought periods.

SPIEGEL: But foreigners didn't commit the massacres in Darfur.

Bashir: Of course there were crimes, even horrible crimes, but it's the same everywhere in the world where armed gangs cause trouble and oppose the government. It is the obligation of our armed forces to confront the rebels. Everything that is claimed abroad about the Janjaweed militias and their alleged attacks is done solely for the purpose of twisting the facts.

SPIEGEL: Let's be clear about this: There were war crimes in Darfur. Are you claiming that it was merely the lower ranks in your army that committed the atrocities there?

Bashir: Our armed forces always operate within the framework of the law. Any member of the army and the government who breaks the law is held accountable. A police officer once pursued a band of armed men and shot the leader, for which he was sentenced to death. In another case, a member of the security forces killed a citizen in Darfur. He too was tried and executed.

SPIEGEL: As commander-in-chief and head of state, do you assume personal responsibility for what happened in Darfur?

Bashir: It is one of my duties to ensure that the laws are observed, and I am responsible for everything that happens while I perform this duty.

'The Sanctions Are Not Causing any Problems for Us'

Bashir: The actual decision-makers in the United States, but also the FBI and CIA, know perfectly well that the things that are said about Sudan are not true. But powerful interest groups exert influence on the US government. This is the only way to explain the contradictions in the American position.

SPIEGEL: You always suspect Israeli influence behind everything. But you are the one who is helping the Palestinian extremists in their fight against Israel.

Bashir: Yes, we support Hamas's and Hezbollah's legitimate struggle against the Israeli occupation and the resistance against the American invaders in Iraq and Afghanistan, where a president was forced upon the people.

SPIEGEL: But are any secret negotiations between you and the Americans taking place, similar to the talks that once took place with Libyan revolutionary leader Moammar Gadhafi, who, after abandoning his nuclear program and his support for terrorists, was transformed from a declared rogue into an ally of the Americans?

Bashir: Our dialogue with the United States goes through US Special Envoy Scott Gration. We consider this former general to be a reasonable, realistic man. American companies handled our oil business in the past. But they decided to get out of Sudan. They apparently thought that no one would take their place.

SPIEGEL: An economic delegation of the German Arab Association recently toured your country. Is it even possible to conduct business profitably in Sudan, on which the European Union and, more importantly, the United States, have imposed heavy sanctions?

Bashir: We are willing to cooperate with the German economy in all areas, and to protect German projects if requested. The sanctions are not causing any problems for us. On the same day that Siemens announced that it planned to withdraw from Sudan, we signed an agreement with a large Chinese company. In the petroleum sector, we have now signed contracts with Chinese, Indian and Malaysian companies, and these contracts are significantly better than the ones we had with the Americans. The Americans kept 70 percent of the oil proceeds for themselves, and the Sudanese government got only 30 percent. Today the government receives 70 percent. The Chinese also train technicians and experts. Most of the engineers working in the oil fields today are Sudanese.

SPIEGEL: Why did you offer your hospitality to the later top terrorist Osama bin Laden until 1996, for a period of four years?

Bashir: Osama bin Laden was initially active in Afghanistan where, as a mujahedeen, he enjoyed the full support of the Americans. In fact, the CIA kept track of his military operations. After the Soviets withdrew from Afghanistan, bin Laden came to Sudan and built the airport at Port Sudan. The project was financed by the Saudi Arabian government, and the work was done by the Saudi Arabian Bin Laden Group. In other words, he wasn't here as a terrorist but as in investor and businessman. But then he started having problems with the government in Riyadh ...

SPIEGEL: ... because Islamist extremists joined him in Sudan and stirred up the faithful.

Bashir: We, at any rate, were no longer willing to support him in this conflict. But he didn't go back to Saudi Arabia, because he would have been put on trial there, and traveled to Afghanistan instead.

SPIEGEL: You have announced your intention to allow the country's oil-rich south to become independent, if that's what the Sudanese want. Does this mean that you are yielding to international pressure?

Bashir: This didn't happen in response to pressure from abroad, but because we realized that such an important historical event can only be decided by legitimate representatives of the people. Before we hold the referendum on whether the south will remain part of the federation, we want to establish the necessary conditions with the elections in April.

SPIEGEL: If the referendum seals the secession, will an independent south continue to be satisfied with only 50 percent of oil revenues, even through three-quarters of the reserves are in the south?

Bashir: Such details will be resolved after the referendum.

SPIEGEL: In any event, the north will retain sovereignty over the oil business for the foreseeable future, because the pipelines to the Red Sea run through northern Sudan, which is also where the refineries are located.

Bashir: After 50 years of war, we have agreed to a peaceful solution. All those who believe that a non-violent settlement of the conflict is not possible are wrong, no matter what the southern Sudanese decide. The Czechs and the Slovaks were the last people to set an example of peaceful and amiable coexistence between two nations that were once united.

SPIEGEL: The United Nations has its largest contingent of peacekeepers, more than 30,000 soldiers, stationed in southern Sudan. Will that become unnecessary if the negotiations with the Darfur rebels are also successful?

Bashir: If the situation in Sudan stabilizes and the peace holds up, UN troops will no longer be needed. But if foreign soldiers remain in the country after fulfilling their mission, it will only create problems.