Many consider Thaksin Shinawatra to be phantom-like. For some time, few knew the former Thai prime minister's whereabouts. At one point the 62-year-old was seen in the Balkans, and then later in Russia. He was spotted in Uganda, South Africa, and repeatedly in Switzerland. Most of the time it appears that Thaksin, who is now a citizen of Montenegro and possesses a Nicaraguan diplomatic passport, resides in Dubai. There, he has a snow-white mansion in the wealthy Emirates Hills district. A Jaguar and a Lexus are parked in front of his home.

The Thai army leadership and the current government of Prime Minister Abhisit Vejjajiva would like nothing better than to arrest Thaksin. The military drove the popular politician, who was elected three times, out of office in 2006. He was later sentenced to two years in prison for abuse of office, and the state confiscated about €1 billion of his assets. But Thaksin evaded arrest and left for London. Thailand is set to hold its next parliamentary election on July 3. There is a strong chance that Thaksin's sister Yingluck, 43, will become the country's next prime minister if the military doesn't intervene.

In an interview with SPIEGEL, former Prime Minister Thaksin discusses his sister's candidacy in parliamentary elections and the prospects for reconciliation in Thailand.

SPIEGEL: Mr. Thaksin, the political fronts in your home country appear to be unchanged. On the one side you have the so-called 'yellow shirts', the supporters of the government; on the other you have the 'red shirts,' their opponents. They have positioned your sister, Yingluck Shinawatra, as their candidate in the upcoming parliamentary election. Will she soon be leading Thailand?

Thaksin: All the polls have her ahead. But I am seriously worried about her. The political culture in Thailand is very violent. We are sure the government will try to rig the elections to prevent her from winning.

SPIEGEL: Whose idea was it to get your sister to run?

Thaksin: We decided together: The entire family, the party, and of course, she herself. We thought long and hard about who the right person would be to lead our Pheu Thai Party into the elections, but in the end we kept coming back to her.

SPIEGEL: Few people are willing to believe you. Many think you decided it all by yourself and are simply using her as a tool.

Thaksin: No matter who the candidate was, my political opponents would claim I was using them. Even if Prime Minister Abhisit suddenly decided to join our party, they would still claim I had instrumentalized him.

SPIEGEL: What makes Yingluck a particularly suitable candidate for the post? She doesn't have any political experience.

Thaksin: That is precisely her advantage. After the military coup of 2006 and last year's military deployment against the opposition, with more than 90 dead, what the country needs more than anything else is reconciliation. A person, who up until now has had nothing to do with politics, is especially well suited for that. Yingluck doesn't have any political baggage weighing her down. She is also a successful businesswoman who is used to leading a large organization.

SPIEGEL: You have eight sisters, but you're apparently especially close to Yingluck.

Thaksin: That is true. She's my youngest sister. My mother was always very close to her. Unfortunately, my mother died very young. Before she died, she asked me to take special care of Yingluck. So that's what I did. I raised her like my own daughter. I sent her to school in the United States, and when she returned to Thailand after college, she got a low-level job at one of my companies. She was excellent and quickly rose to become the head of my telecommunications company AIS. We have the same way of thinking, the same DNA.

SPIEGEL: Are you afraid there will be another military putsch if your sister wins?

Thaksin: I hope the elections will be free and fair, even though the military is already exerting an immense influence. But I hope our lead will be so great that even this government will be unable to manipulate the election.

SPIEGEL: Would you call on your supporters to demonstrate if you thought the elections were being rigged?

Thaksin: We're trying to prevent that. We do not want revenge, but rather to offer the hand of reconciliation to our opponents. The country must be united again. That's something the current government hasn't addressed, and that's also why it has no chance of winning the election.

SPIEGEL: Will reconciliation include an amnesty for all those who were responsible for the killing last spring?

Thaksin: If there is evidence, then there must also be fair trials. But first we must do everything to get the facts out on the table, no matter which political party a person belongs to. By that I mean the red shirts and yellow shirts as well as military personnel.

SPIEGEL: Were you surprised by the tepid international response to the military action? After all, there was plenty of evidence that soldiers also fired live rounds at unarmed demonstrators.

Thaksin: I recently read that an arrest warrant has been issued for Moammar Gadhafi for ordering his troops to use live ammunition and deployed both snipers and tanks against protesters. Abhisit also did all that. But Thailand has no oil, and the government is good at lying.

SPIEGEL: When you were prime minister, you weren't the perfect democrat either. You stand accused of serious human rights violations.

Thaksin: I accept this criticism. We made mistakes, particularly in the war on drugs ...

SPIEGEL: ... during which thousands of people are believed to have been killed.

Thaksin: Perhaps my expectations were too dramatic. I wanted something to happen. I wanted to scare those criminals, to send them a warning. But I never personally ordered anybody to be killed. I'm a Buddhist, and I believe that those who kill will be killed themselves in their next life. When I was prime minister, people even came up to me and asked me if they should get rid of my opponent, the liar Sondhi Limthongkul. I was very powerful at that time, but I said, "That's out of the question. I don't want anyone to be killed, not even Sondhi Limthongkul."

SPIEGEL: You are said to have bought votes.

Thaksin: You can't buy votes. Sure, you can give someone 500 baht, about 10 euros, and tell him to vote for you, but if he doesn't like you, he'll put a cross next to somebody else's name when he's in the polling booth. 500 baht won't buy you food for four years. As a politician, you have to keep your promises, otherwise you won't be reelected. And I was always reelected.

SPIEGEL: What about the allegations that you paid Red Shirt demonstrators to take to the streets last year?

Thaksin: You can't pay anyone to go out and get shot at. That's nonsense. In any case, I have less than half as much money as I had at the start of the 1990s; barely a billion. A little is left over from the sale of my soccer club, Manchester City. So it is not true that I enriched myself. In fact, I was robbed.

SPIEGEL: So you don't bankroll the Pheu Thai Party, the political home of the Red Shirts?

Thaksin: No. I have friends who do that. I can't even transfer any money from over here. But don't underestimate the willingness of ordinary Thais to donate money.

SPIEGEL: The most controversial law in Thailand at the moment seems to be Article 112, which makes it a criminal offense to insult the monarchy. It is currently being used en masse to muzzle the government's political rivals.

Thaksin: Lots of people are being thrown in prison because of it, and even foreigners are being charged.

SPIEGEL: When you were prime minister, many critics of the monarchy were also convicted.

Thaksin: When you're in power, you can sometimes fall for the temptation to use this power. However, the king talked me out of it.

SPIEGEL: Why won't the king step in and sort things out now?

Thaksin: He is very old and sick, and he's surrounded by the wrong people.

SPIEGEL: Why won't you return to Thailand to face justice?

Thaksin: I would if I could be guaranteed a fair trial. But there's no way that I, my family and my supporters can expect justice at the present time.

SPIEGEL: That's why you are enjoying the security of your exile. Things look to be going well for you here in Dubai.

Thaksin: I'm often in Africa where I've invested in gold mines in Uganda, in platinum and coal in South Africa and Zimbabwe and Tanzania. I buy concessions and have people look for mineral deposits. Many big investors are reluctant to get involved because they are scared of the political instability and crime. I'm a newcomer as far as minerals are concerned, so the African continent is ideal.

SPIEGEL: You speculate in commodities...

Thaksin: I'm hyperactive. I can't sit quietly or stay in one place. Ten months ago I bought myself a plane, and I spend an average of about two-and-a-half hours a day in the air. Only recently, I was in Geneva to meet some friends and have a good meal. I also travel to Russia very often to meet my old friend, Prime Minister Vladimir Putin. When I'm on the plane, I go on Skype and organize my business.

SPIEGEL: You are clearly not missing Thailand very much.

Thaksin: I missed Thailand greatly in the first year. In the meantime, I have a lot of people who visit me here, friends and relatives. They bring me sausages from Chiang Mai and curry from Chonburi. That's how I can get by. Nevertheless, I would like to be in Thailand again in December when my oldest daughter gets married. By that time my sister may be ruling the country.

SPIEGEL: Mr. Thaksin, we thank you for this interview. 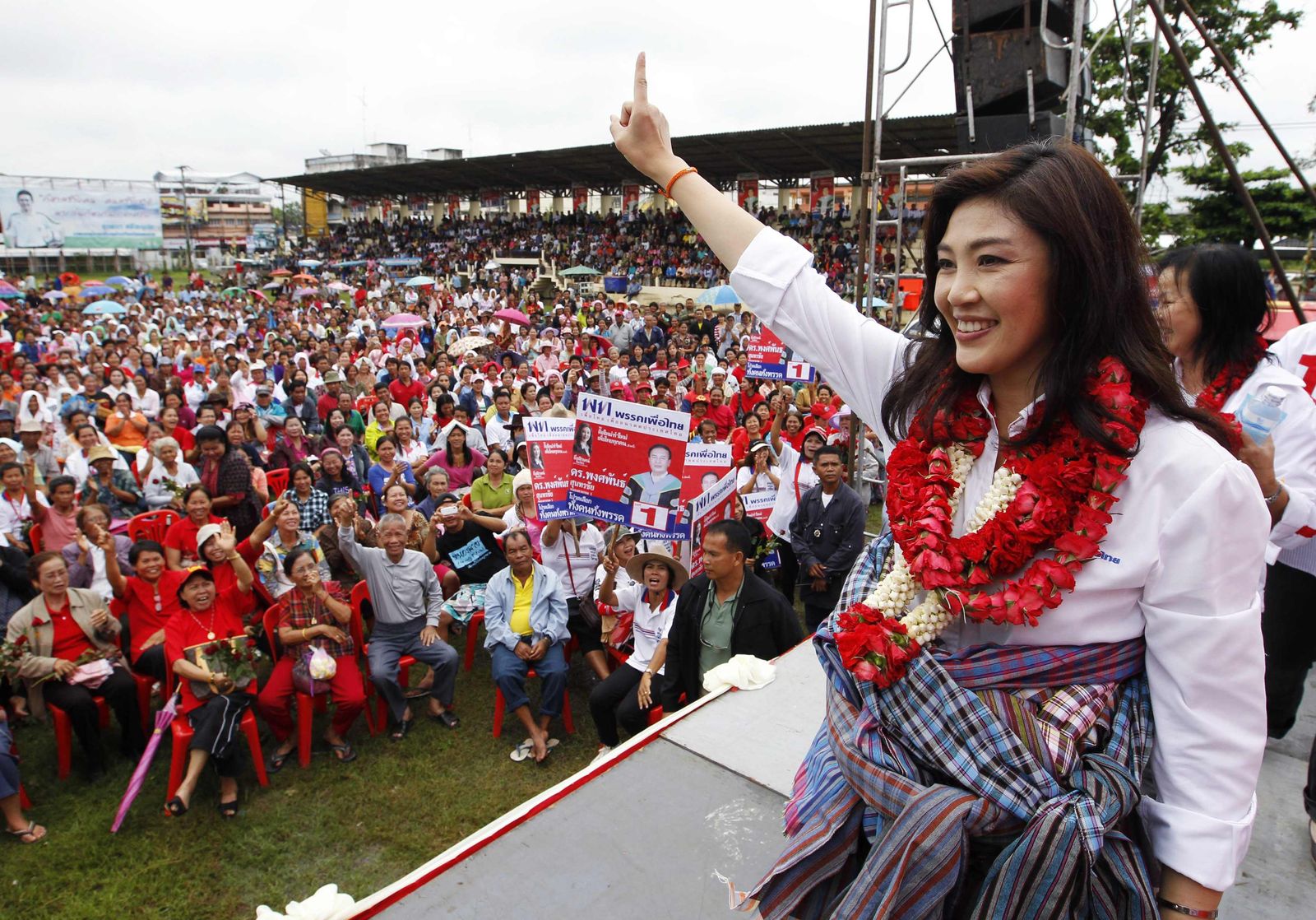