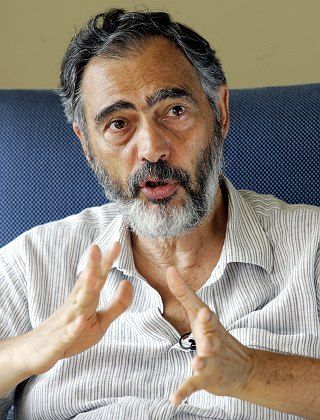 The Turkish-Armenian journalist Hrant Dink was gunned down on Jan. 19 this year. Now, six months later, the trial of his alleged killer and 17 other suspects has started. The trial is being carried out behind closed doors because the accused gunman, Ogün Samast, is a minor.

Dink was hated by ultranationalists for describing the mass killing of Armenians in the early part of the 20th century as genocide. He was prosecuted for his comments under Article 301 of Turkey's penal code, which bans insults to Turkish identity.

Critics have accused the authorities of failing to act on reports of a plot to kill Dink. Two of the suspects, Yasin Hayal and Erhan Tuncel, even claim they were working for the security forces. The current case is seen as an important test of whether the Turkish judiciary is capable of investigating claims of official negligence.

DER SPIEGEL spoke to Etyen Mahcupyan, Dink's successor as editor-in-chief of the Turkish-Armenian weekly Agos about the trial.

SPIEGEL: The trial against Dink's alleged 17-year-old murderer and his accomplices has started. But now the investigation is to be continued. Were there other people involved?

Etyen Mahcupyan: This type of attack must have been prepared by a bigger network than just the gang that is currently on trial. There had to be political connections, people who pulled strings, paid money or laid the ideological groundwork. So far only two members of the nationalist Great Unity Party (BBP) have been charged.

SPIEGEL: One of the accused claims that they were controlled by a group within the police force.

Mahcupyan: A number of police officers knew what was going to happen. But they didnt prevent the murder. Were they acting of their own accord, or did someone give them orders? That is unclear. 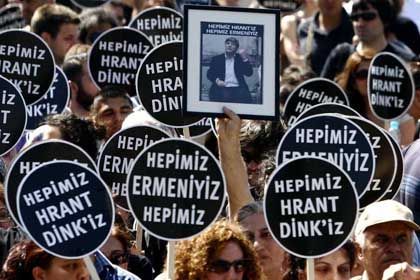 People demonstrate near the court in Istanbul where the Dink murder trial is being held.

SPIEGEL: What was the perpetrator's motive?

Mahcupyan: There is a link here between ultra-nationalism and criminal gangs. The aim was probably to cause unrest in the election year with the intention of torpedoing Turkey's chances of joining the European Union. Presumably a whole series of attacks was planned, but the public reaction was too strong to go ahead with them.

SPIEGEL: In general, politically motivated crimes are seldom solved in Turkey. Will it be different this time?

Mahcupyan: In the past the judges were usually afraid to take risks. None of them wanted to expose the links between the military, the government and the judiciary. But in this case there is the potential to really get to the bottom of things. The judges are flexible and are working with the lawyers.

SPIEGEL: You are Dink's successor as editor-in-chief at Agos. Are you and your colleagues still being threatened?

Mahcupyan: Yes, but that is the usual hatred that we have to face. The Armenian community and their patriarch often receive threats from the nationalists as well.

SPIEGEL: Dink was pulled up before judges on several occasions because of his articles. Have you also been hampered in your work?

Mahcupyan: Not at the moment, but if it were politically desired then someone could find an old article and file charges. I have already been put on trial for allegedly insulting state institutions.